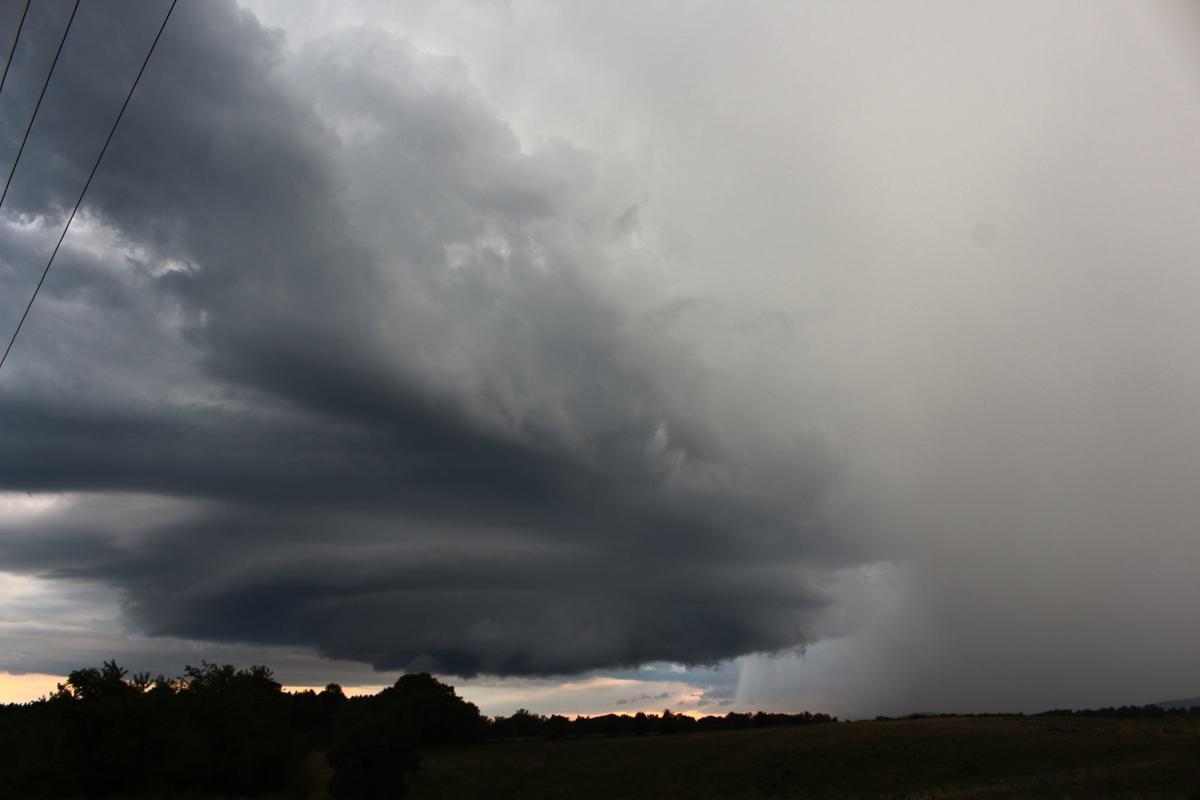 The dark, spinning base of a mesocyclone within a supercell thunderstorm is evident on the left from this location near Goodview, looking westward, on Aug. 15. At right, heavy rain pours down with strong downdraft winds, separated from the rotating updraft. Mark Overbeck, a meteorology-degree graduate of Virginia Tech, followed the storm for more than an hour east of Roanoke.

Jamey Singleton followed an isolated storm near Ferrum in Franklin County that was spun into “frisbee stacks” by mid- and upper-level winds changing speed and direction with height. 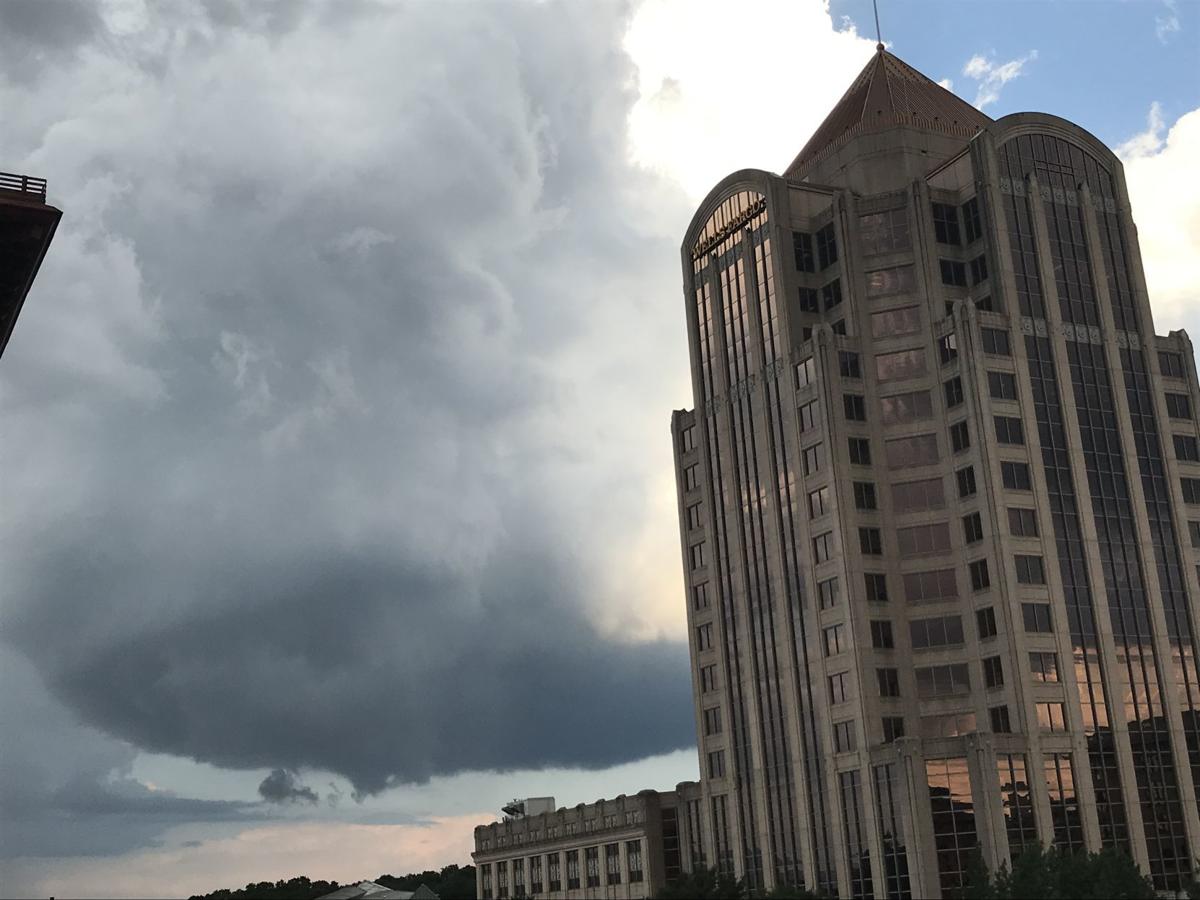 The rounded base of a supercell thunderstorm — defined by a rotating updraft — is visible east of Roanoke beyond the city’s tallest building, the Wells Fargo Tower, early Thursday evening. The cloud didn’t have the right dynamics to form a tornado.

The dark, spinning base of a mesocyclone within a supercell thunderstorm is evident on the left from this location near Goodview, looking westward, on Aug. 15. At right, heavy rain pours down with strong downdraft winds, separated from the rotating updraft. Mark Overbeck, a meteorology-degree graduate of Virginia Tech, followed the storm for more than an hour east of Roanoke.

Jamey Singleton followed an isolated storm near Ferrum in Franklin County that was spun into “frisbee stacks” by mid- and upper-level winds changing speed and direction with height.

The rounded base of a supercell thunderstorm — defined by a rotating updraft — is visible east of Roanoke beyond the city’s tallest building, the Wells Fargo Tower, early Thursday evening. The cloud didn’t have the right dynamics to form a tornado.

Summer’s heat and humidity often percolate afternoon thunderstorms. Towering cumulus clouds billow like stacks of cotton balls, then unleash a rush of rain, wind and lightning from a darkened base.

But some things happened last Thursday to give the storms a different spin, quite literally.

For a couple of hours early Thursday evening — to the awe of local storm chasers and weather geeks who were able to observe — the skies along and just east of the Blue Ridge were adorned with swirling storm structures more associated with the Great Plains than Virginia.

Thankfully, there were no reports of major damage from the supercells, the scientific term for thunderstorms with a rotating updraft.

Mark Overbeck of Roanoke was positioned east of Roanoke near Goodview and followed a spiraling mesocyclone storm base as it moved southeast toward Smith Mountain Lake. The rotating, rain-free storm base built a few lowered bases, or wall clouds, and made a couple of attempts at a funnel, but the weak low-level shear and high cloud bases probably thwarted tornado development.

“I think what stood out to me the most, and what separated this from the majority of storms I have chased in Virginia, was both the size of the storm, and the visibility,” said Overbeck, a Virginia Tech meteorology graduate who was recently featured in The Washington Post’s “Capital Weather Gang” for this same storm.

Jamey Singleton, meteorologist at Franklin County’s Cable TV 12 and known to many for his past stints at WSLS (Channel 10) and WSET (Channel 13), picked a different storm to go after, driving toward one at Ferrum that for a while exhibited “frisbee stacks.”

“Usually I’m staring at a radar screen when storms are rotating,” Singleton said. “I’ve covered supercell storms and tornadoes for years from inside a studio, but recently, I’ve been trying to get outside more and refresh myself on cloud structures after seeing a presentation by Chris White in 2016.”

White is a Roanoke-based storm chaser who is often seen on WDBJ (Channel 7) and has tagged storms of note over much of Virginia. A frequent colleague of mine helping lead Virginia Tech storm chase trips in past years, White was headed to Richmond during Thursday’s supercell spree, preparing to give a storms presentation to children in Richmond.

Rotating storm cells are not as rare as you might think in our region, but most are short-lived, and even when they’re not, they don’t typically produce highly visible, long-lasting, high-based structure like Thursday’s storms did.

Thursday’s storms developed along an area of surface wind convergence, as easterly winds, augmented by the outflow of storms earlier in the day near Lynchburg, met westerly winds near the Blue Ridge.

An outflow boundary sliding in from the north also contributed, particularly to the storm east of Roanoke, possibly providing a “triple-point” where wind fields from three directions met, giving the storm extra spin.

Another critical factor was strong winds high in the atmosphere that rapidly swept the cirrus anvil and much of the precipitation away from the updrafts, facilitating good ventilation that allowed the swirling updrafts to continue longer than typical and the resulting storm structure to remain visible.

Even when rotating thunderstorms do occur in our region, it is so often the case that winds are so light aloft that the precipitation either swirls tightly around the rotation, obscuring the visibility of any storm structure or lurking tornadoes, or the wet downdrafts extinguish the fire, so to speak, pouring right into the updrafts and washing them out.

“When seeing storm structure like I saw on Thursday, it’s normally a couple hundred feet off the ground, embedded in rain and low clouds,” Overbeck said. “This was different, and I think the likely culprit was the strength of the anvil-level winds.”

The storm structure was so crisp and separated from the downdrafts and rain that there was an unusual amount of visibility even from the back side as well, allowing me to capture one of my most prized photos in years of storm and cloud photography — a full vertical of a supercell storm structure with Roanoke’s tallest building, the Wells Fargo tower, in the foreground.

Peeking out a window at The Roanoke Times building during a night editor shift, I noticed some cloud lowerings and multi-layered structure between downtown buildings that made me think there might be something going on besides a typical summer “pop-up” pulse storm.

Then I saw Overbeck’s first tweet from east of Roanoke, which looked like something I’ve driven hundreds of miles trying to see in Kansas in years past, and I made a dash for a parking garage a couple of blocks away, running at times.

The rounded base of the mesocyclone obliged by wrapping up a little more and drifting southeast right into my view through the gap over the railroad track, and I had my shot.

I wasn’t the only one pleased with my catch.

“Seeing a supercell sitting within driving distance of my home was special,” Singleton said. “A lot of people don’t realize these things happen here and just drive by. It was a special day for sure. Nature gives us treats like this a lot, you just have to stop what you’re doing for a little bit and take notice. It’s worth it. I slept well that night.”