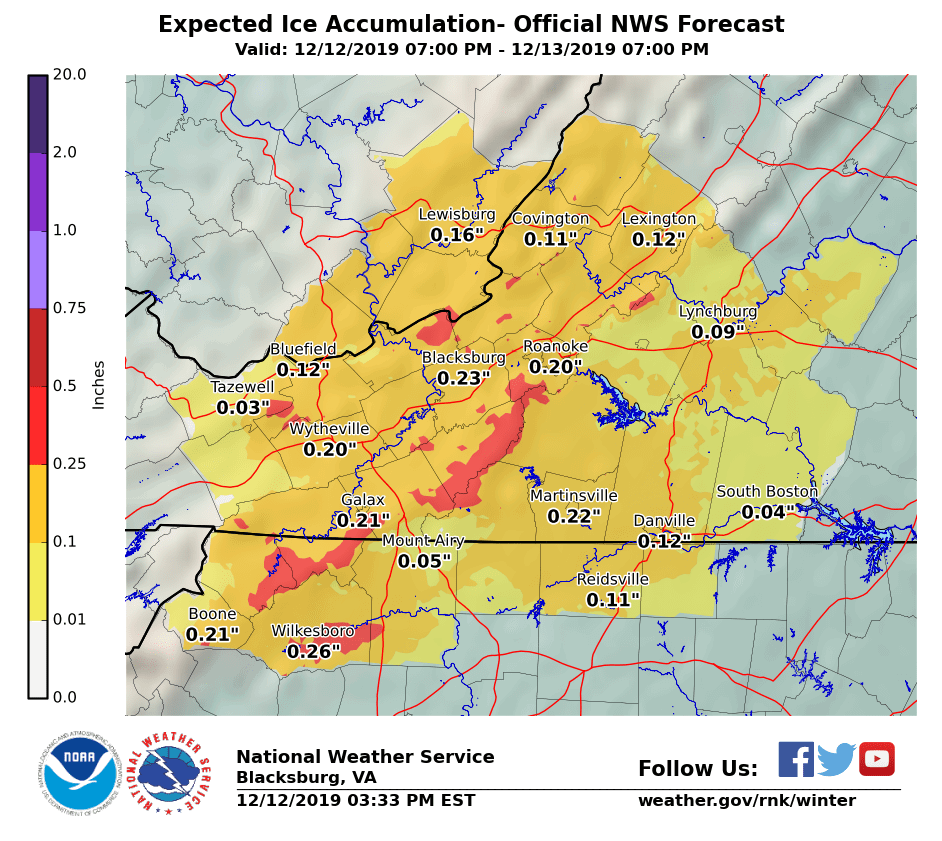 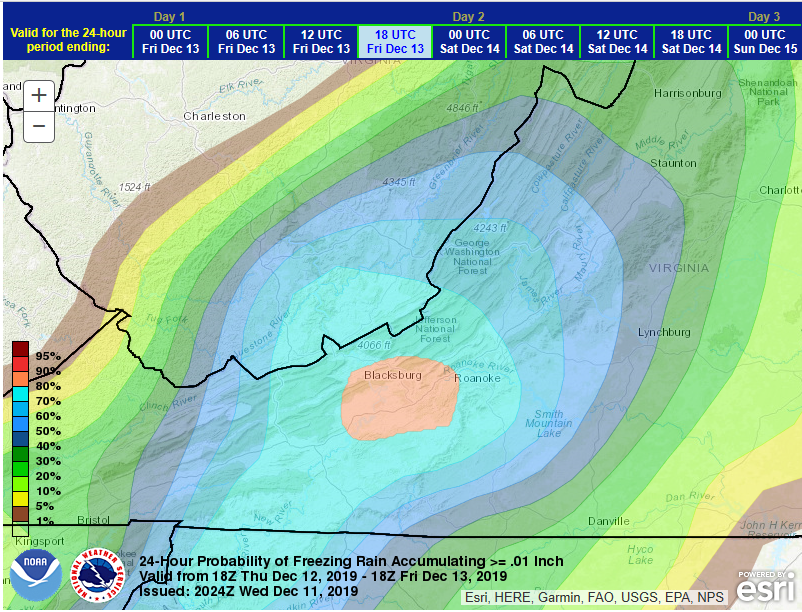 The New River Valley, edging into some of the Roanoke Valley and the Blue Ridge south of Roanoke, is the bullseye for highest probability (80%) of seeing at least .01 inch of freezing rain by early afternoon Friday.

The New River Valley, edging into some of the Roanoke Valley and the Blue Ridge south of Roanoke, is the bullseye for highest probability (80%) of seeing at least .01 inch of freezing rain by early afternoon Friday.

UPDATE 5:40 AM, 12/12/19: No huge changes to the ongoing forecast on Friday morning's ice events, though it may arrive a bit earlier (looking at 1 to 3 a.m. for start of freezing rain in Roanoke/New River valley areas) and, therefore, may be able to accumulate just a little more before it warms enough to change to rain. The National Weather Service has come up slightly on its ice accretion forecasts, with 2/10-inch ice common in the Roanoke/New River valleys, and perhaps a bit more with locally over 1/4 inch along the Blue Ridge south of Roanoke. One-quarter-inch of ice achieves winter storm warning criteria, though those are typically only issued if half or more of a given locality is expected to reach that threshold. These amounts, if they come to fruition, would possibly trigger some sporadic power outages, though it still appears unlikely that a major widespread ice storm with multiple tens of thousands of outages will occur. The main concern will be icy roads, especially secondary roads and bridges, though main highways may also develop icy patches. As heavier rain arrives, it will also bring warmth with it, and temperatures are expected to rise above freezing during the mid to late morning on Friday. We might allow till early afternoon given the stubborn tendency of cold-air wedges to break. Once the troublesome ice is past, we'll be left with soggy weather into Saturday, though gradually getting milder, possibly reaching the 50s during the day Saturday. END UPDATE

There is nothing creative or new about the likely freezing rain setup for the Roanoke and New River valleys on Friday morning. It's one we've seen repeatedly over the years, with varying degrees of severity. This one probably won't be one of the most severe nor will it be as spotty and weak as many are.

As moisture begins being lifted northward on Thursday night from a low-pressure system to our south, it will overrun cold air at the surface, pressed against the mountains for a time by high pressure to the north. The cold surface layer will be thin and the overrunning layer increasingly warm, so any snow or sleet at the outset of the precipitation would be brief. Rather, rain is likely to fall through that thin layer of cold and then freeze on objects at the surface, what we call freezing rain.

This is my annual reminder that amount of rain that falls DOES NOT equal the amount of icing that accumulates on trees, power lines, roads or other exposed objects, as only part of that rain freezes while the rest runs off, more running off the closer to 32 it is and/or the harder it rains.  Ice accretion may be the trickiest type of precipitation forecast to make, because it depends on numerous factors like temperatures of various surface, rate of rainfall (too heavy runs off more) and exact air temperature that can change subtly and radically alter the outcome.

In this case, it does not appear that enough rain will fall before it warms above freezing (models suggest mid morning to midday Friday for this, but it's often a couple or three hours later, especially in valley locations) for a widespread "ice storm" with a quarter-inch or more of accretion, enough to start breaking a lot of limbs and causing widespread power outages. There may be pockets of this level of ice, but it does not appear it will be the norm. Most locations within about a 50-mile radius of Roanoke will likely see .01 to .15 ice accretion, with a few spots a little more than that (and maybe some sneaking out with no ice at 33 degrees -- I don't think this is the case where the urban floor of the Roanoke Valley will do so, though, as is often what happens).

The main trouble could be if low temperatures in the mid to upper 20s verify on Friday morning. Temperatures several degrees below freezing are more likely to lead to icing of roads -- at least on a patchy basis -- than temperatures near the freezing mark would. We may not have a "skating rink" situation in which ice coasts just about every road surface, but some icy roads (especially shaded, rural roads) and patches of ice elsewhere may well develop.

The cold high pressure to the north will be retreating and the flow of warmth and moisture aloft robust enough to eventually bleed to the surface and raise temperatures above freezing. Again, nailing an exact time for this time often proves elusive, but early afternoon Friday seems to be a good general guess for most of the Roanoke and New River valleys to be above the freezing mark. This may be one of those cases where Roanoke actually warms above freezing later than Blacksburg/Christiansburg and even some of the higher elevations to the south that get in the milder air a little quicker.

The low will track pretty close to us on Saturday, continuing to sweep in more moisture for quite a bit of rainfall -- totals near 1 inch possible. Whatever the temperature rises to on Friday afternoon will probably end up being about the low temperature for the following night and morning, and Saturday may see enough milder air to shoot into the 50s in some places.

The front then passes, the winds turn to the northwest, it gets a little colder for Sunday (30s/40s), with some mountain snow showers possible.

The next storm system Monday and Tuesday may also start with wintry mix, but appears at this point to be taking  too far of a northerly track for a bona fide "winter storm" in our region. There is still time for changes that would go to entirely rain in our region or back to more of a wintry scenario. For now, let's just get through Friday's icy morning.