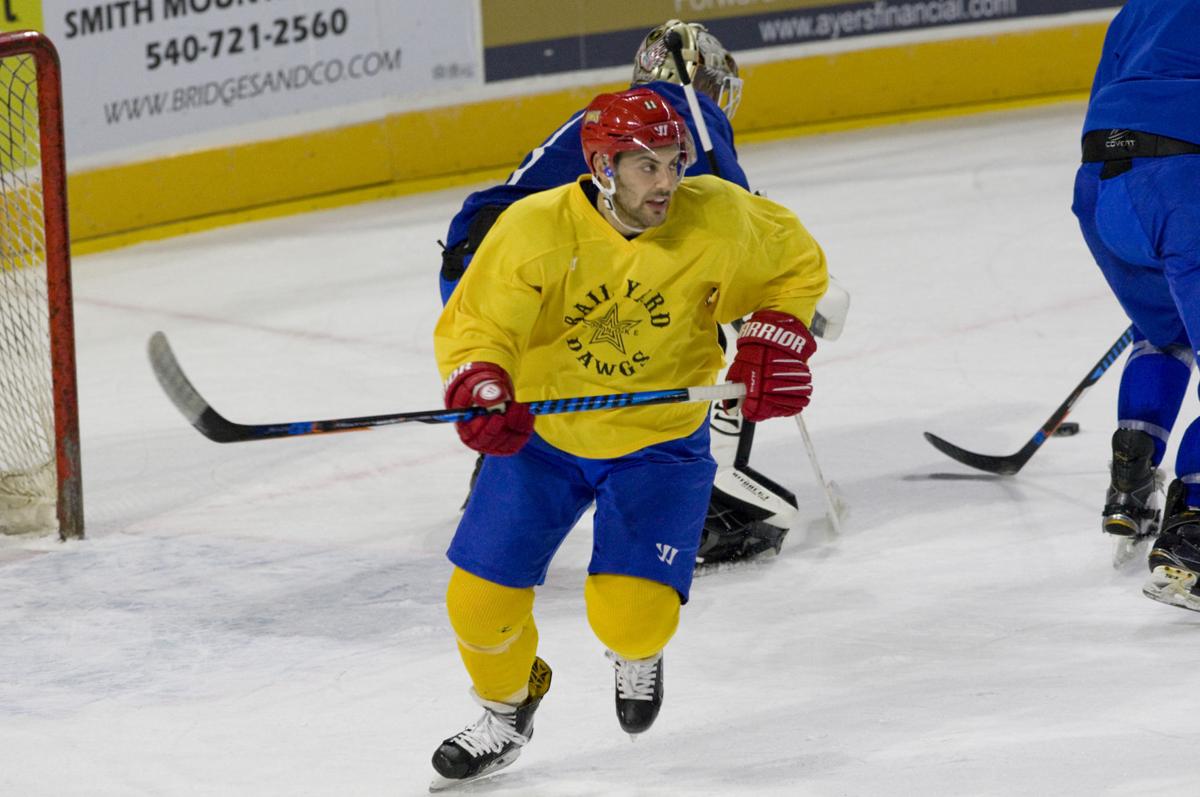 Steve Mele, who’s tied for the team lead in points, practices on the ice with the Railyard Dawgs on Wednesday morning. 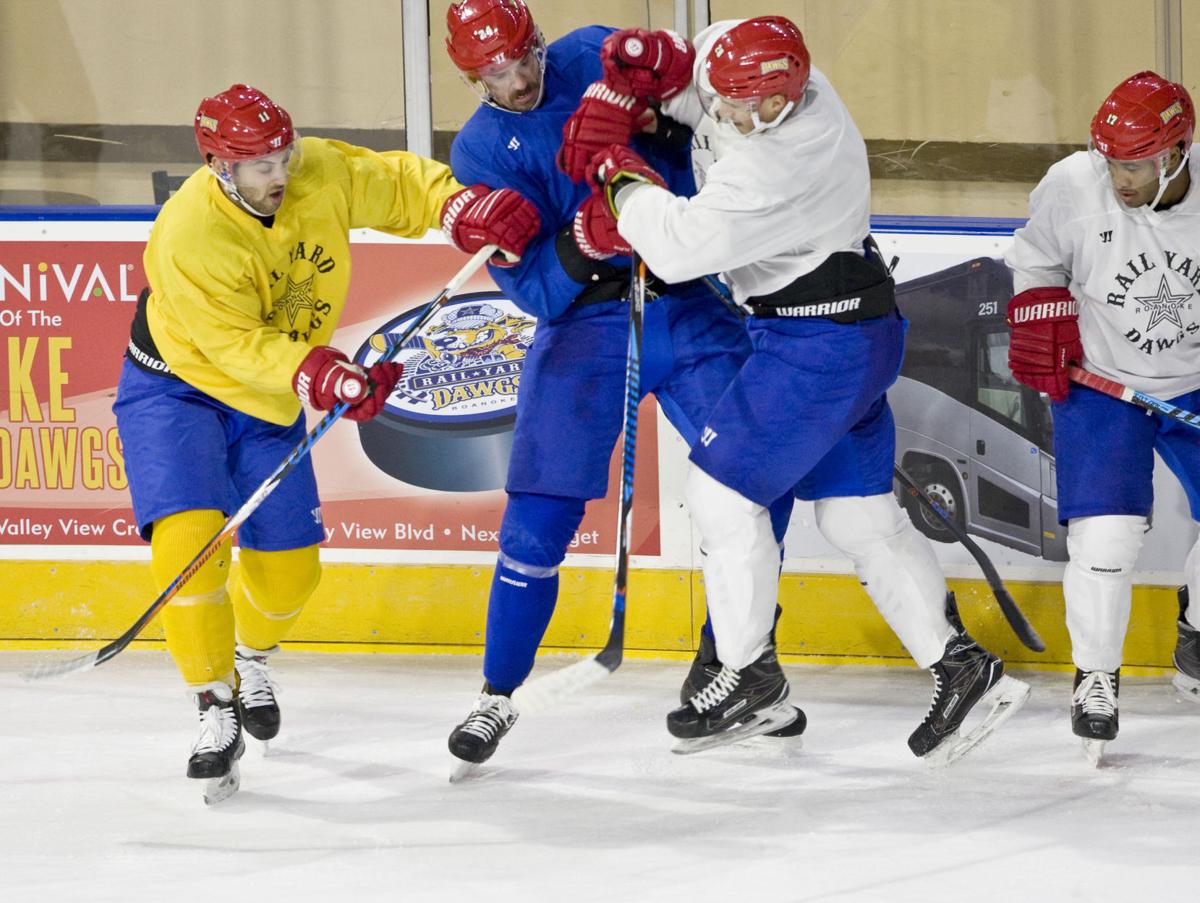 Steve Mele (left) practices with the Roanoke Rail Yard Dawgs at the Berglund Center on Wednesday. 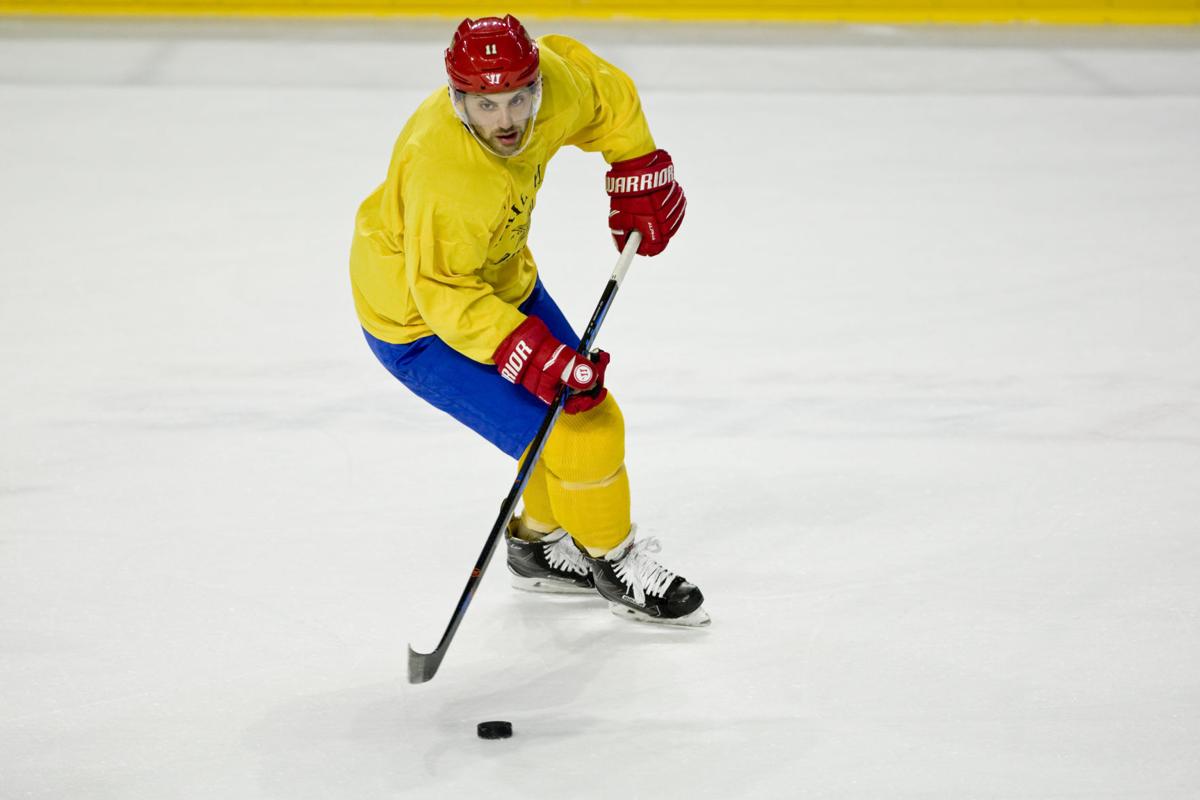 Steve Mele, who's tied for the team lead in points, practices on the ice with the Railyard Dawgs on Wednesday morning.

Steve Mele, who’s tied for the team lead in points, practices on the ice with the Railyard Dawgs on Wednesday morning.

Steve Mele (left) practices with the Roanoke Rail Yard Dawgs at the Berglund Center on Wednesday.

Steve Mele, who's tied for the team lead in points, practices on the ice with the Railyard Dawgs on Wednesday morning.

Looking to buy a nice single-family home in the greater New York City area? Steve Mele would be happy to help — just as soon as he’s done with hockey practice that day.

Mele, a 28-year-old center, is tied for the Roanoke Rail Yard Dawgs lead in points through four games. He’s also frequently tied up during the team’s down time — making phone calls, sending emails, posting listings and building clients as a licensed real estate agent in his home state of New York.

“He’s kind of the same way off the ice as he is on the ice,” Dawgs coach Sam Ftorek said. “He grinds. He works multiple jobs. He’s always on the go, always on the phone. There’s always an angle.”

Like every other player in that Roanoke locker room, Mele grew up harboring dreams of playing in the NHL. But the Bronx native saw another aspiration develop as he got older.

“I want to be on ‘Million Dollar Listing’ so bad,” he said, referring to the Los Angeles-based real estate show on Bravo.

Mele long has been fascinated by the idea of house flipping. Two years ago, while competing for the ECHL’s Brampton Beast in Ontario, he took advantage of a minor league hockey player’s most abundant resource: free time.

When practice ended in the early afternoon, Mele spent the rest of his days taking an online real estate course.

“I heard it’s actually easier going to a class than taking it online,” Mele said. “Because in a class, they cut to the chase of what you need to know and what you don’t need to know. But on the internet, I literally studied everything you would possibly need to know and probably stuff I’ll never have to use in my life.”

He acquired his license in August of 2016. With experienced cousins serving as his real estate broker and mortgage broker, he began listing homes. That continued last winter, when he was an assistant captain for the expansion Dawgs.

“I’m a beginner, so I do a lot of buyer clients,” Mele said. “It’s a lot of showings. I’ve sold a few houses, single-family homes, but I haven’t gotten that big yet. I’m actually trying to figure out how those people get to that level of listing $4 or $5 million homes. It’s just like any other business; it takes time, and you’ve got to build your resume and clientele.”

Mele’s hockey resume includes five seasons in the pro ranks, including a wealth of ECHL experience. Ftorek trusts him immensely. When Mele missed three months last season with a torn ligament in his wrist, Ftorek kept his center on the bench and allowed him to help with coaching decisions.

Ftorek encourages all his players to pursue interests outside of hockey — especially those that can help them financially.

“He’s figured that out. That’s another reason he’s a pro; he realizes that there’s more to life than just the six months that we’re here.”

Hockey season is actually a less-demanding time for Mele than the summers, when he does heavy manual labor for his mother’s iron works company during the day and handles his real estate duties in the evenings and on weekends.

He credits the iron work — installing steel barriers on city curbs, repairing bridges — for helping him rebuild strength in his wrist and get off to a strong start this season. Two of his four assists so far came in Roanoke’s lone victory on Oct. 27 against Macon, when he also scored a goal.

Creating such on-ice moments remains his top priority for now, but he’s keeping his eye on other possibilities, as well.

“Hopefully, my career doesn’t end any time soon, but it’s good to know that I have something else I’m interested in. I try to help the younger guys figure that out, too. It’s good to broaden your horizons a bit, because you’ve got plenty of time in the day to see what interests you.”