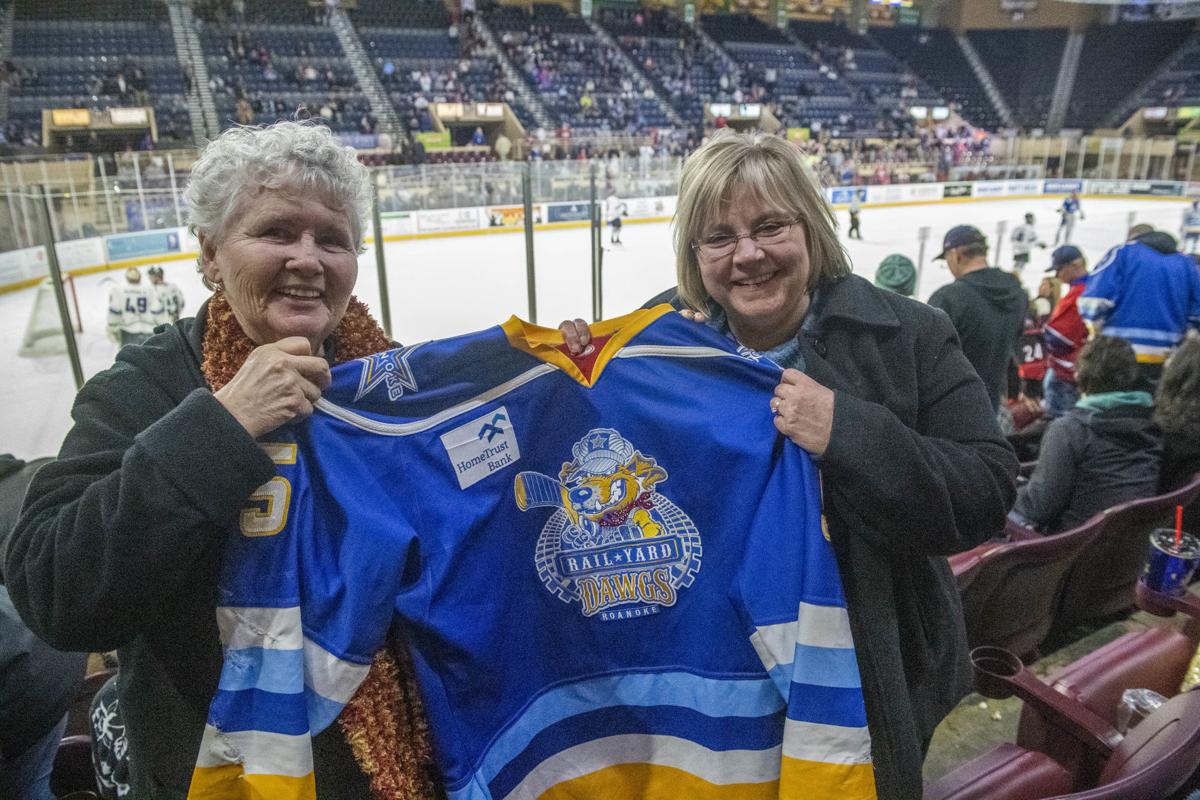 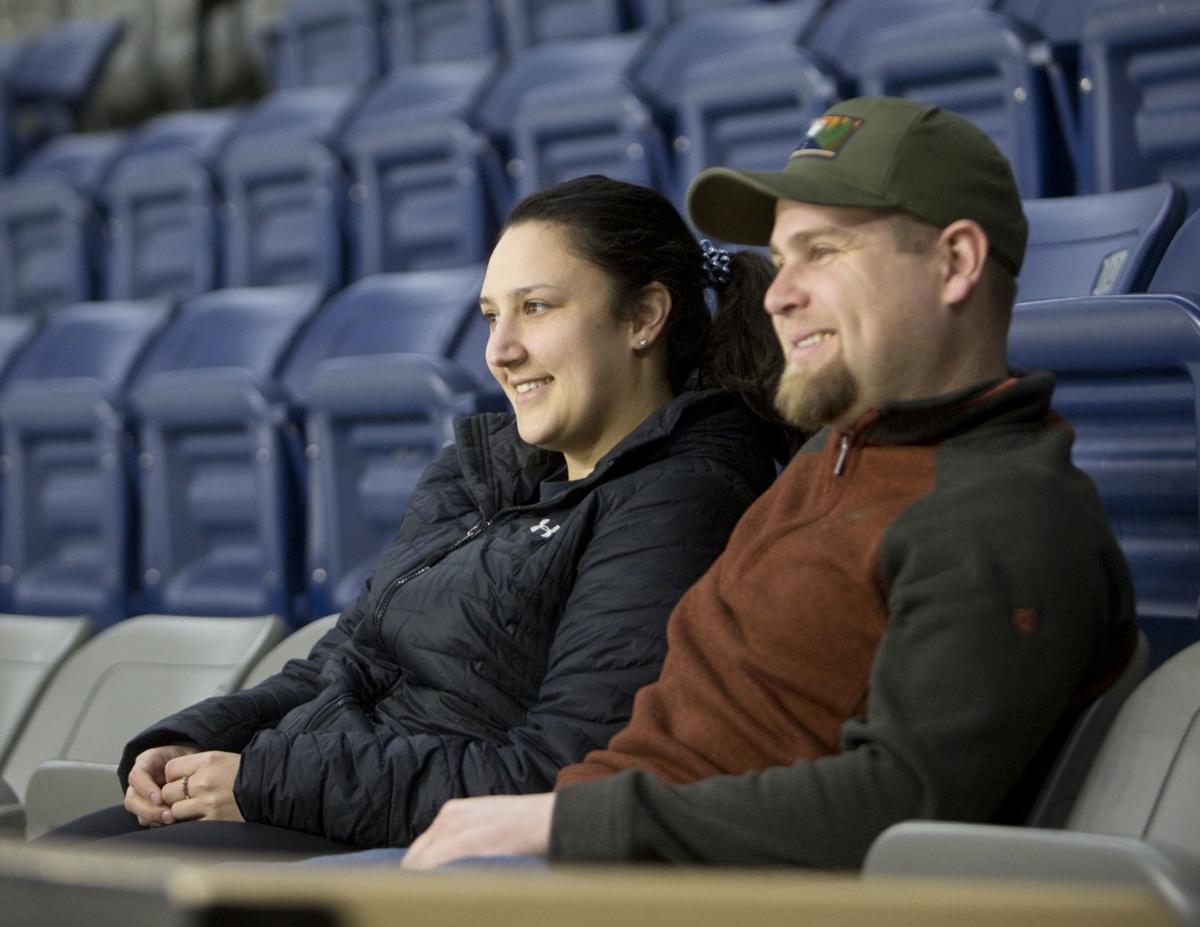 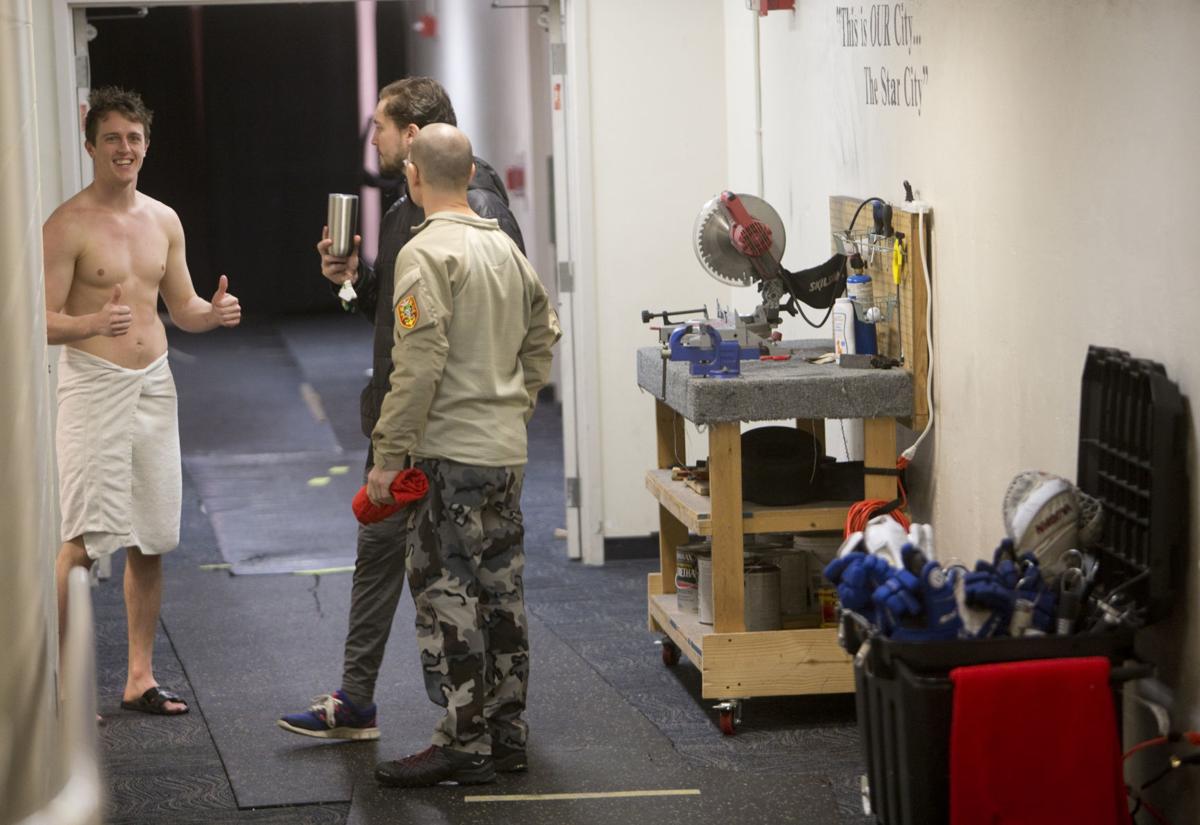 Brantley "Brant" Sherwood comes out of the training room in a towel on his way to the shower on Friday after the Railyard Dawg's morning skate before Friday night's game, and greets Eric Dill,of Columbus, Ohio, father of goalie, Henry Dill, during a father's day visit to the ice. Earlier the father's sat in on the team meeting in the locker room pre-practice. 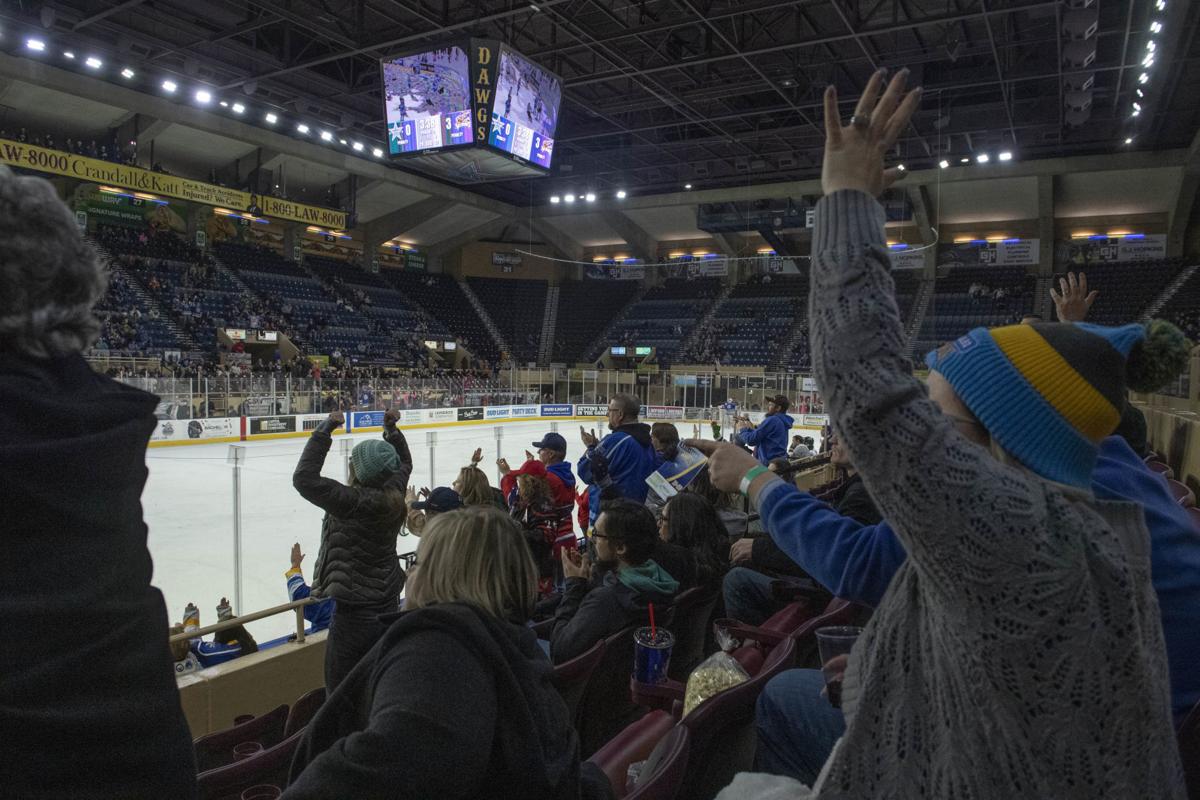 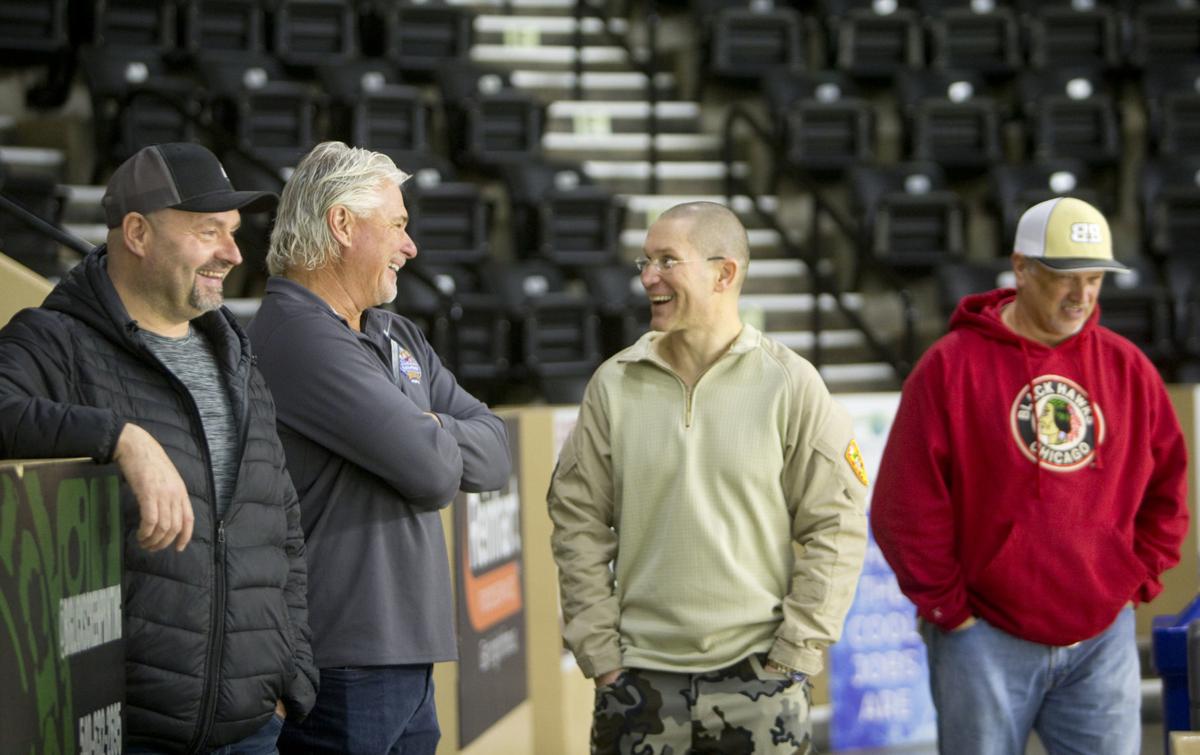 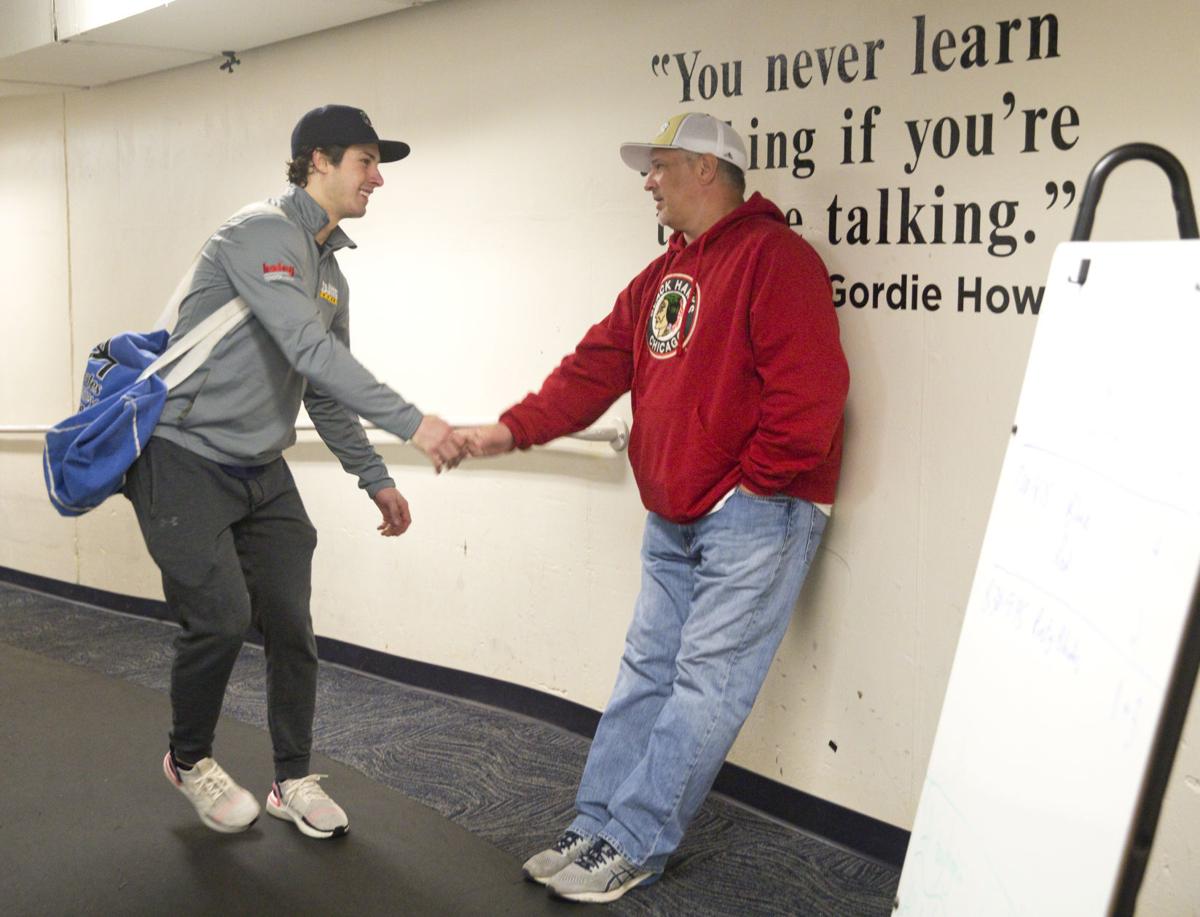 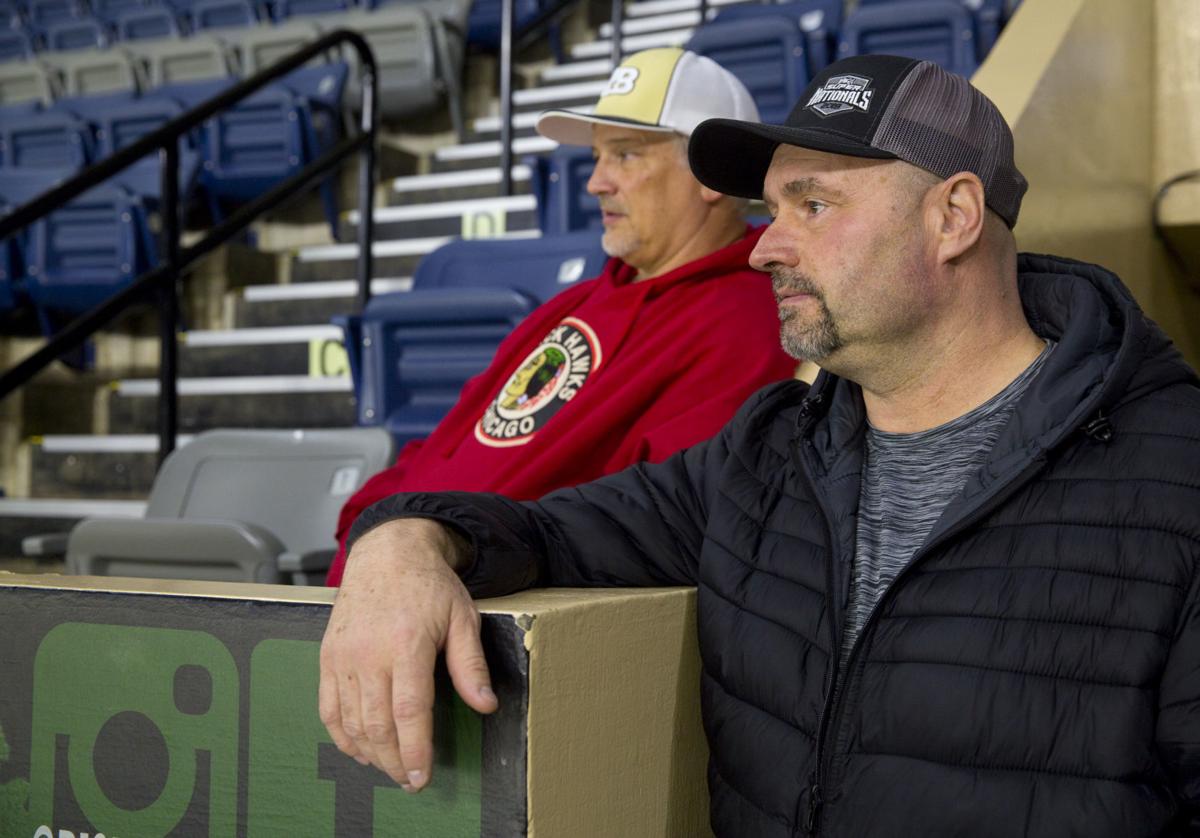 Brantley "Brant" Sherwood comes out of the training room in a towel on his way to the shower on Friday after the Railyard Dawg's morning skate before Friday night's game, and greets Eric Dill,of Columbus, Ohio, father of goalie, Henry Dill, during a father's day visit to the ice. Earlier the father's sat in on the team meeting in the locker room pre-practice.

Great-aunt Marlene would like to see some fists fly.

Hey, she didn’t travel the eight hours down here from Binghamton, New York, for nothing. Sure, the Roanoke Rail Yard Dawgs put her up in a lovely hotel room. The reception dinner on Thursday was awesome, too.

“I love the fights,” Great-aunt Marlene said. “I’ve always told him, ‘I love it when you fight.’ And he does fight.”

Great-aunt Marlene — full name, Marlene Gleason — is one of about 30 relatives who converged on the city this weekend for Rail Yard Dawgs Family Weekend.

Borrowing from a tradition in the NHL, the organization provided accommodations, food and inside access to players’ relatives during Friday and Saturday home games against Knoxville and Macon.

The festivities began Thursday night with a welcome dinner at the Berglund Center’s Club 611 that featured prime rib, chicken and all the trimmings, furnished by the team’s booster club.

Parents sipped Bud Lights and Cabernet while mingling with their sons, other team members, ownership and front office personnel.

The VIP guests have premium seats in Section 7 reserved for them at both games, and they’re invited to the team’s morning skates and video sessions both days.

Bob McGinn has. The Dawgs’ majority owner has attended a slew of family weekends in the NHL thanks to sons Jamie, Tye and Brock, who have played in the league. He made sure to institute a similar event of his own — a rarity at the minor league level — beginning with the franchise’s inaugural season of 2016-17.

“Obviously, we don’t have private jets or anything like that, but we do it this way,” McGinn said. “It goes over very well. We have to put it in the budget, but we think it’s money well-spent. I will never give up on this. This is one of my little babies.

“So as long as I am CEO of this organization, we will always have parents weekend. Always, always, always. For sure.”

It certainly doesn’t hurt recruiting efforts. Word gets around in the SPHL, a transient league where players often choose where they want to play.

Roanoke center Austin Daae said that when he played for a rival SPHL team a few years ago, the locker room expressed admiration and envy about what Roanoke was doing.

“It’s something that I never saw when I was playing,” said Dawgs coach Dan Bremner, who had six seasons in the SPHL. “I hope the guys are as grateful as I would have been to get this.

“Whether you play in the SPHL or you play in the NHL, making it to professional hockey is never on one person. It’s never just a guy that’s playing. The family puts in a ton of sacrifice with time and money and everything. Even if it’s a little thing like a trip like this, the payback is always nice to see.”

Players can invite as many family members as they want, with only one stipulation: They have to be able to fit in one hotel room.

Recent acquisition Marcus Ortiz had his girlfriend and her mother at Thursday’s dinner, with his own mother expected to arrive Saturday. Daae’s father flew in from Saskatchewan.

Winger Josh Nenandal had his mother, Lynne, and grandmother, Vicki, come in from Brecksville, Ohio.

“Oh, it’s great to have them here,” Josh said. “What Roanoke’s done here, it’s taken the burden off trying to plan the family trip. Getting them out here, getting the hotel rooms, having this little banquet to start is above and beyond what a lot of organizations do.

“That’s all you want, right? You want to see your family to see you succeed and do what you love to do. It’s a great weekend.”

Vicki spent part of Thursday showing pictures on her phone of her 8-month-old puppy, Gracie, and lobbying for the dog to be designated the team’s “fashion plate.”

Vicki has traveled long distances before to watch her grandson play college hockey for Lake Superior State and SUNY-Oswego, but this is her first chance to see him wear a pro uniform. The Nenandal family — including Josh’s father, David, who had to stay home to watch Gracie — typically follow the games on their phones or computers.

“This is great,” Vicki said. “I didn’t know it was so involved, you know? I just thought we were going through the locker room and seeing their stuff.

“I want to dance with Diesel,” she added, referring to the Dawgs’ mascot. “I want to get on camera so Dave sees me. I was going to wear a hat, but now I’m thinking I’m going to travel with Diesel, because he’s on all the time.”

Not only does Sherwood have his grandmother and great-aunt on hand, but his parents, Mike and Deb, left before dawn on Thursday to make the 10-hour drive from Daytona Beach Shores, Florida. The family hadn’t all been together to watch Brant play since his college days, which ended in 2015.

“It’s like a little reunion,” Brant Sherwood said. “I just think it makes everything about the season a little more important, because it shows how much the organization cares about us.”

And if great-aunt Marlene wants a fight? Well, maybe he’ll give her one. But even if not, she and the other relatives are having a blast.

“He’s a nice, nice boy and I just love watching him,” Gleason said. “This is fantastic. I’ve enjoyed it so much. The coaches take good care of the kids, and the kids respect their coaches. I think it’s awesome.”