Martin Truex Jr. celebrates a win at Richmond in 2019. NASCAR said the Richmond spring race has been canceled. 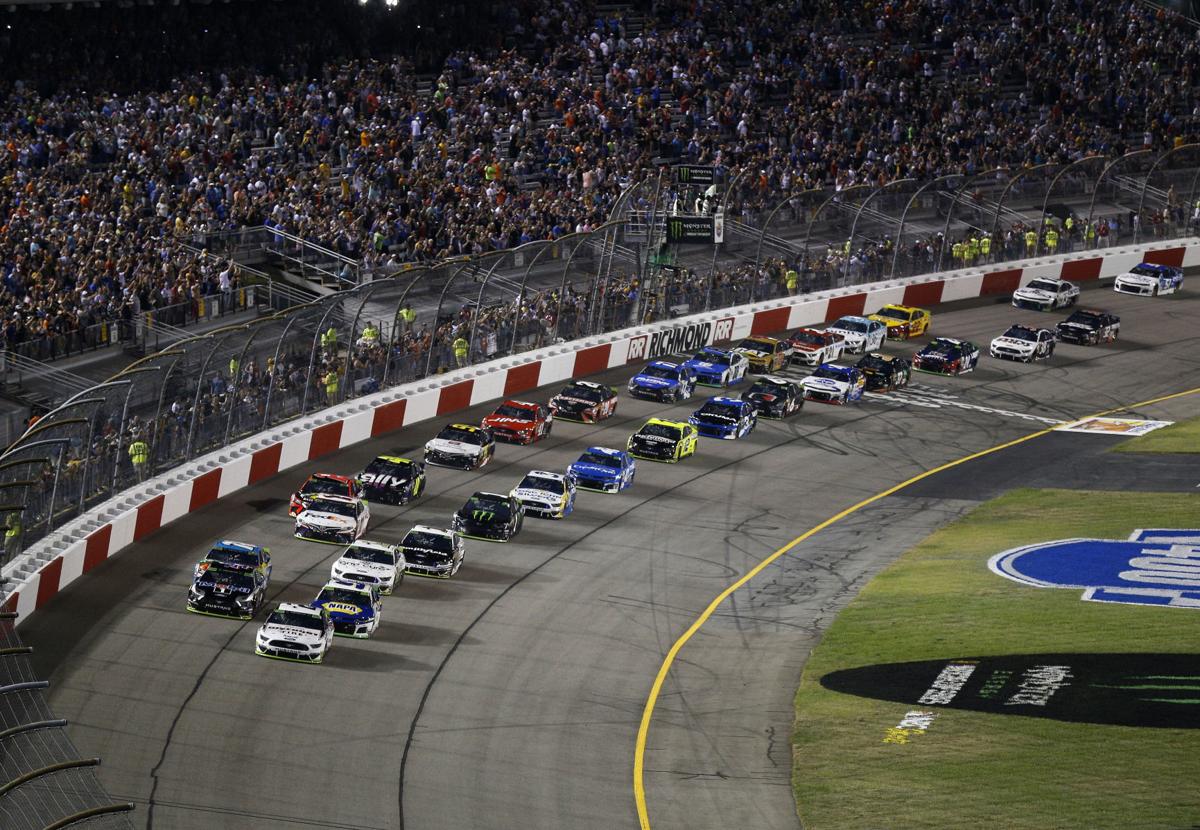 Richmond Raceway has had two annual events on the top series’ schedule every year since 1959.

Martin Truex Jr. celebrates a win at Richmond in 2019. NASCAR said the Richmond spring race has been canceled.

Richmond Raceway has had two annual events on the top series’ schedule every year since 1959.

NASCAR plucked one 2020 Cup Series race away from Richmond Raceway with its announcement Friday regarding a realignment of this season’s schedule.

NASCAR canceled the track’s April 19 race, which had already been postponed as part of a shutdown because of the coronavirus pandemic. The Richmond track’s second Cup race — set for Sept. 12 as part of the series playoffs — is still on the NASCAR schedule. NASCAR said it will announce further schedule adjustments in the near future.

In a statement released by the track, Richmond Raceway President Dennis Bickmeier looked ahead to “brighter and healthier days ahead in the greater Richmond region” and the Cup tour’s return to the track in September.

NASCAR’s announcement Friday did not detail coming schedule changes, but identified Richmond Raceway, Chicagoland Speedway and California road course Sonoma Raceway as the three tracks that would each cede a 2020 event as the tour is realigned.

Unlike Richmond, the Sonoma and Chicagoland tracks do not have second Cup tour events.

The Cup tour is not shrinking — at least so far. NASCAR has made it clear that it expects to run a full 36-race schedule, and that it intends to finish the season with its 10-race playoff schedule intact.

The series went on an eight-race hiatus after its fourth event, the March 8 race at Phoenix Raceway. NASCAR, moving to re-package the schedule, will reopen the tour with Cup races May 17 and May 20 at Darlington Raceway in South Carolina, followed by events May 24 and May 27 at Charlotte Motor Speedway.

Those races give Charlotte one event and Darlington two events that were not on the original 2020 schedule — hence the need to delete races from other tracks.

Virginia is the only state with four annual Cup Series events on the usual schedule — two each at the Richmond track and Martinsville Speedway — and as such the state seemed a logical candidate to have a race removed.

NASCAR, in adding extra events at its two tracks in the Carolinas, made a point of placing races at tracks relatively close to the Charlotte area, where most of the Cup teams are based, to cut highway time and travel expenses. The four-plus-hour drive from Charlotte to Richmond is nearly twice as long as the drive to Martinsville.

Martinsville also had a Cup race postponed during the shutdown. NASCAR has not announced plans for that event.

The fall races at both the Richmond and Martinsville tracks are part of NASCAR’s playoff schedule. That makes it problematic to run either a weekend Cup Series doubleheader or a midweek back-to-back event at either track. Such an added event would interrupt the 10-race playoff run with its three-race elimination rounds leading to the championship-deciding finale.

NASCAR designated the two added Darlington races as replacements for the Richmond and Chicagoland events. NASCAR owns and operates all three of those tracks.

The Richmond track is among those with the longest tradition as a NASCAR Cup Series venue. It was first added to the schedule for NASCAR’s premier series in 1953, with one race that year and single events in the 1955-58 seasons. The track has had two annual events on the top series’ schedule every year since 1959 — first as a half-mile dirt track, then a half-mile paved oval, and since 1988 in its current ¾-mile D-shaped configuration.

In a posting on Richmond Raceway’s website, the track said ticketholders for the canceled race have until June 10 to ask for a refund or elect to apply 120% of their ticket cost toward tickets for a future event in 2020 or 2021.

The credit offer is good for Richmond or any other NASCAR-owned track.

The canceling of the Chicago race is an ominous sign for workers at the track in Joliet, Illinois. The track staff was hit this week with a second round of layoffs by NASCAR since the pandemic.