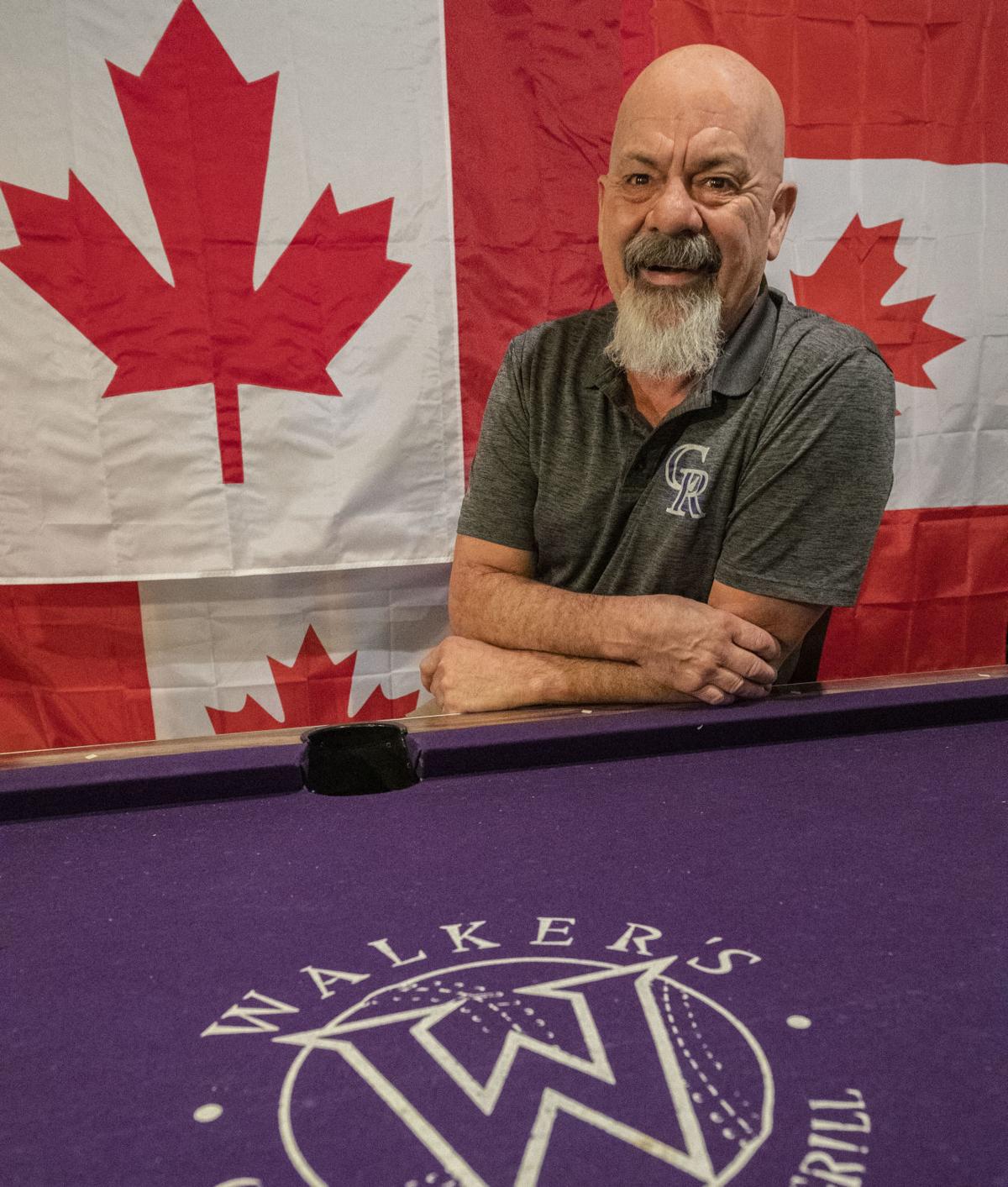 Carey Walker poses with some of his collectibles at his home in Vinton. Walker is the older brother of Larry Walker, who was voted into the Baseball Half of Fame last week. 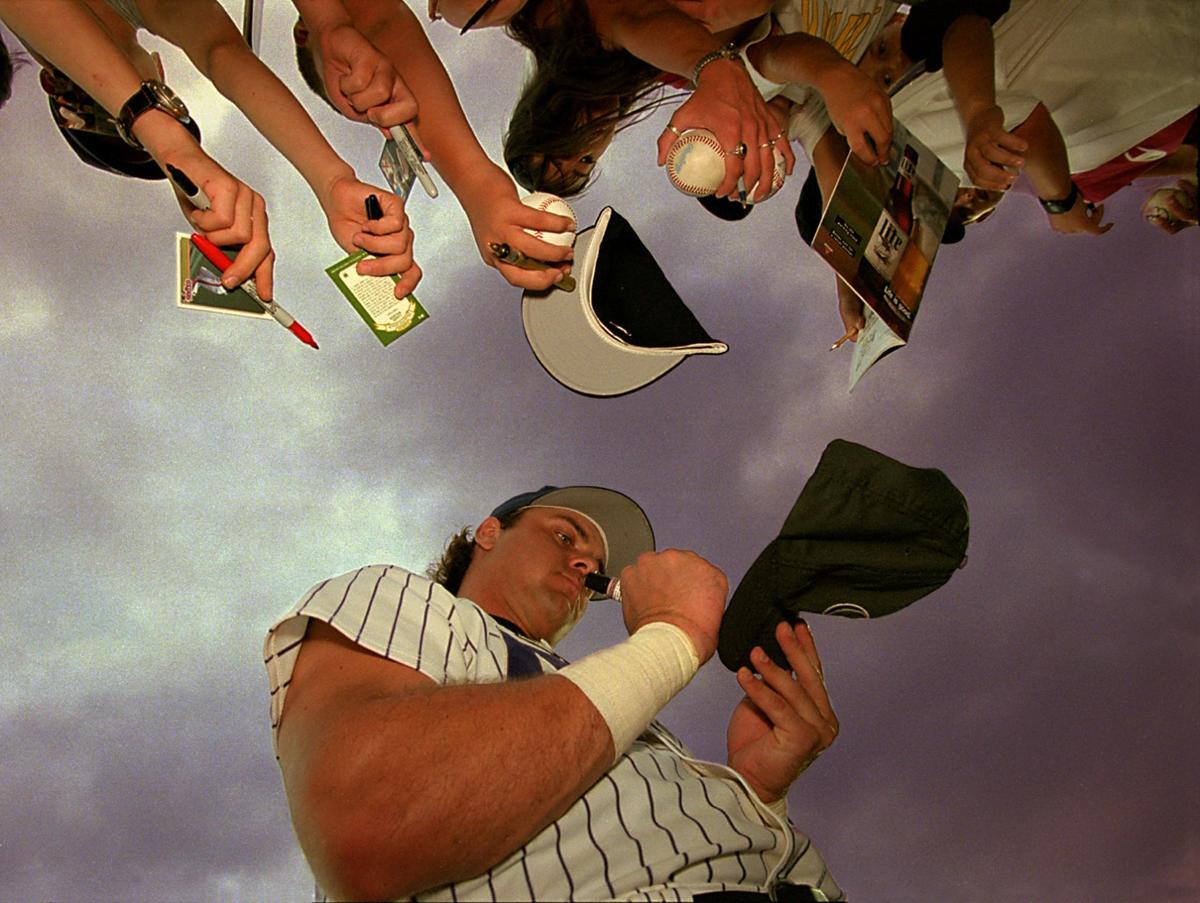 Larry Walker signs autographs at Salem Memorial Baseball Stadium prior to an August 1996 Salem Avalanche game. Walker played two rehab-assignment games for the Avalanche while recovering from a collarbone injury.

Carey Walker poses with some of his collectibles at his home in Vinton. Walker is the older brother of Larry Walker, who was voted into the Baseball Half of Fame last week.

Larry Walker signs autographs at Salem Memorial Baseball Stadium prior to an August 1996 Salem Avalanche game. Walker played two rehab-assignment games for the Avalanche while recovering from a collarbone injury.

To hear longtime Vinton resident Carey Walker tell it, this had to be one of the greatest walk-off victories ever.

Officials had told his brother Larry that they would call between 5 p.m. and 5:20 p.m. this past Tuesday if he’d been elected to the Baseball Hall of Fame.

No phone call during that window would mean no induction for Larry, who was in the 10th and final year of eligibility to be selected by the writers.

Carey loves his little brother, but he’d never been with Larry on Hall of Fame announcement day before. What would be the point?

But a significant uptick in support last year (54.6%) and the finality of the 10th year spurred Carey to hop a flight to West Palm Beach, Florida, and join 14 other well-wishers at Larry’s home for the big day.

“At 5:19, Larry takes his drink, holds it up and goes, ‘Thank you all for’ — and the phone rings,” Carey said. “We all just went [bleepin’] crazy. I had to take my glasses off because I was boo-hooing so much I couldn’t stand it.”

You can see Carey in the reaction video that ran on the MLB Network and was all over social media that night. He’s the guy on the left, in the black shirt, flipping out with joy.

The Walkers are from Maple Ridge, British Columbia, a small town outside Vancouver. Carey, one of Larry’s three older brothers, was a professional hockey goalie who closed his career with the Virginia Lancers in 1986.

The 62-year-old has lived in Vinton ever since because he wanted to be near his three daughters. He ran a pub in town for four years. For the past three decades, he’s operated his own ceramic tile business, Walker Tile.

“I work my hours how I want to,” Carey said. “Larry doesn’t subsidize my life, because I’m proud. I like to make my own money. I don’t want to be the silver spoon guy.

Carey laughs a lot, and he can make you laugh, too. He swears often, but not in a nasty way. He’s the type of guy who says things like, “This is the only thing I have that’s paid for!” as he pats his belly.

“I’m thankful to Major League Baseball for finally including my brother in their royal family,” Carey said. “But I’m glad his name’s Larry and not Harry. That royal family’s struggling!”

Carey has led an interesting life. Current Columbus Blue Jackets coach John Tortorella slept on his couch in Vinton when Carey was called up to Peoria in ’86.

One of the best goalies in the NHL today, Montreal’s Carey Price, was actually named after Carey Walker. It’s a long story that was chronicled in The Athletic in 2019 — check it out if you get a chance.

Carey treasures the signed jersey he got from Price when the two met after a game last season.

But last week was about Larry, and Carey said he was thrilled to be a part of it. Especially after he saw the SpongeBob SquarePants shirt that his brother decided to wear when he got the call, a sartorial choice highly debated on social media.

“Oh, dude,” Carey said. “The good thing about that shirt, when he popped out of his bedroom with that on down in Florida, [bleep], dude, I love that shirt. And I love it even more, because I know one day it’s going to be mine.”

Carey’s no moocher, though. He’s given his brother some things, too.

When Larry was assigned to Utica as an 18-year-old in his first pro season in 1985, Carey (who’s 9 years older and was making $950 a week playing hockey) drove up from Vinton to provide some financial assistance because Larry didn’t get a huge signing bonus.

Montreal got him to put ink to paper for a mere $1,500. The Expos were essentially buying a lottery ticket, an athletic kid who grew up playing hockey and didn’t have much baseball experience.

Larry and Carey were briefly teammates on a fast-pitch softball team in Canada that was coached by their dad.

Carey remembers his brother regularly crushing the ball over the beer garden in center field.

“But the ball takes a different flight in fast-pitch than it does in Major League Baseball,” Carey said. “A lot of stuff’s going down [in baseball]; it all went up in fast-pitch. They had to teach him how to hit a curveball, because he couldn’t hit it. But he learned quick, obviously.”

Carey jokes that he’ll always have two facts he can hold over his brother. Carey was drafted by the Montreal Canadiens in 1977 and also spent a training camp with the old Colorado Rockies of the NHL. He still has the envelopes that contained his first paychecks from those two clubs.

“They paid me before they paid you!” he chides his brother. “I went to the Canucks after that and … well, I tried. But I was ecstatic that someone in my family is on the big stage. Now I can call my brother a HoF. ‘Hey, HoF!’ ”

He can and no doubt will. Carey will be in Cooperstown in July for the induction ceremony, but he might modify his celebration strategy a bit. He went through some serious suffering on Wednesday.

After all the TV crews left Larry’s house on Tuesday, the party really began.

You know what, though? It was worth it.

Never will he see a better walk-off winner.

The older brother of Baseball Hall of Fame-elect Larry Walker was in the audience when the phone rang.