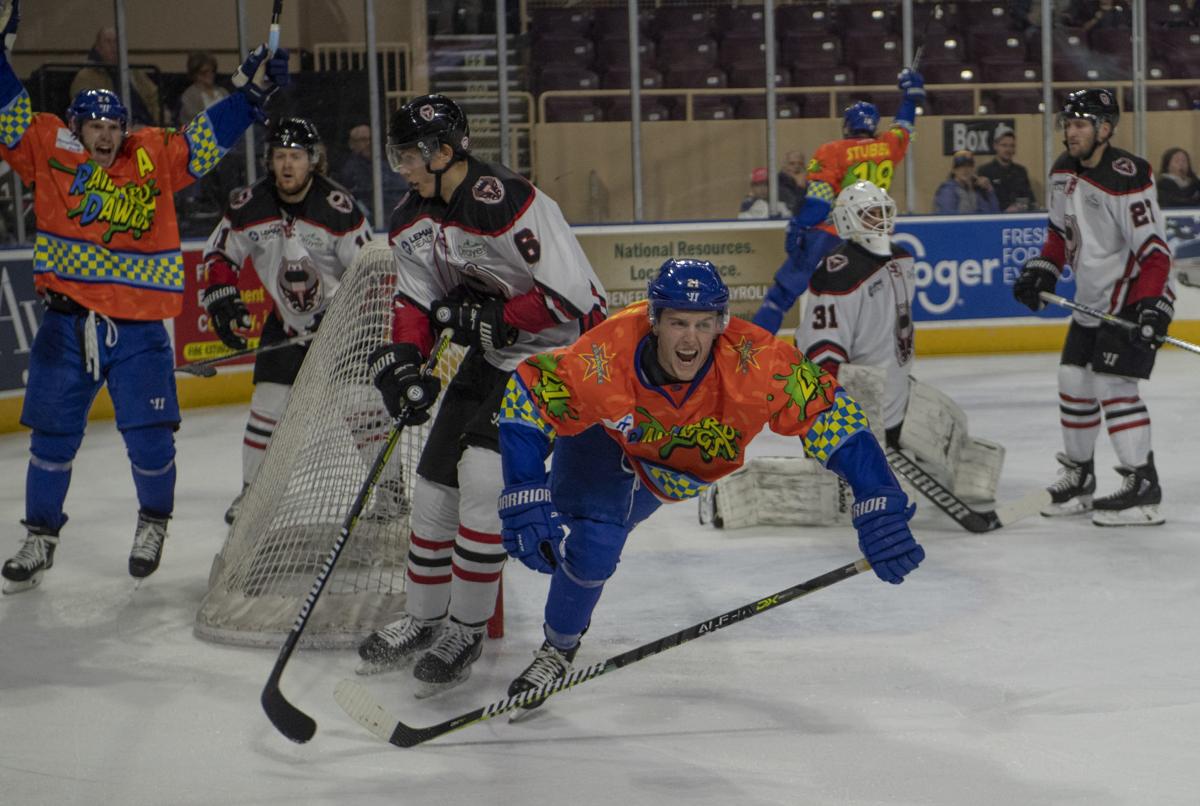 Rail Yard Dawgs forwards Brant Sherwood (center) and Jeff Jones (left) celebrate a goal against the Birmingham Bulls during the second period at the Berglund Center on Friday night in Roanoke. The Dawgs won 5-4 for their third straight victory to open 2020. 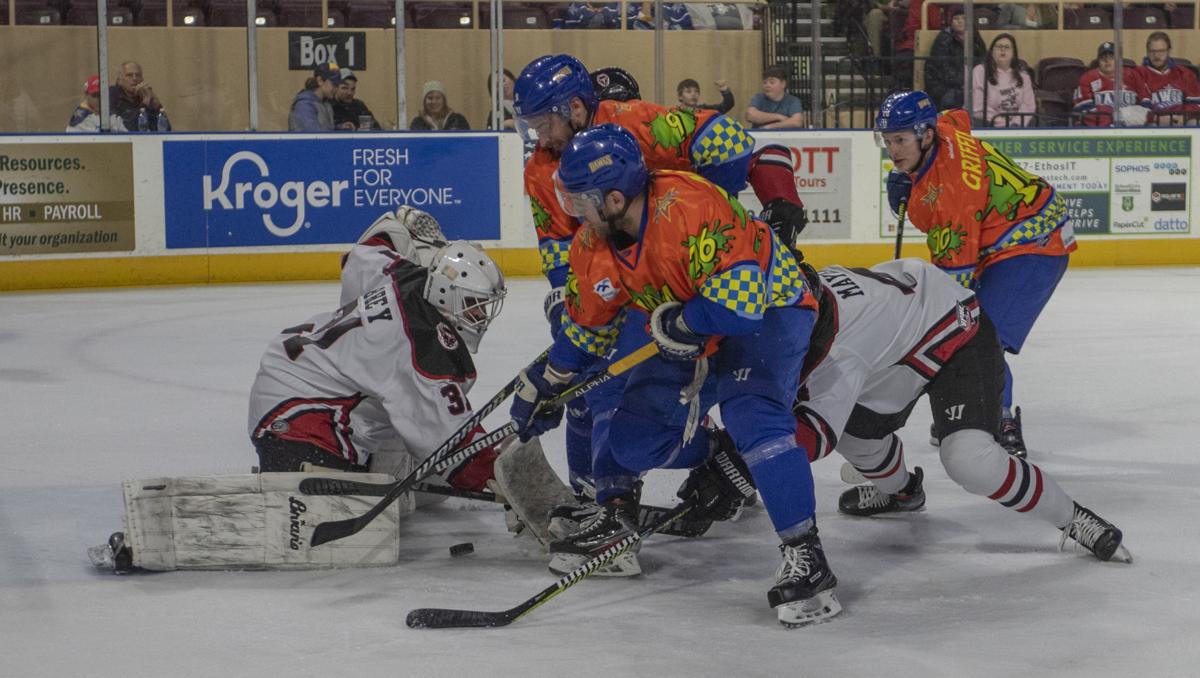 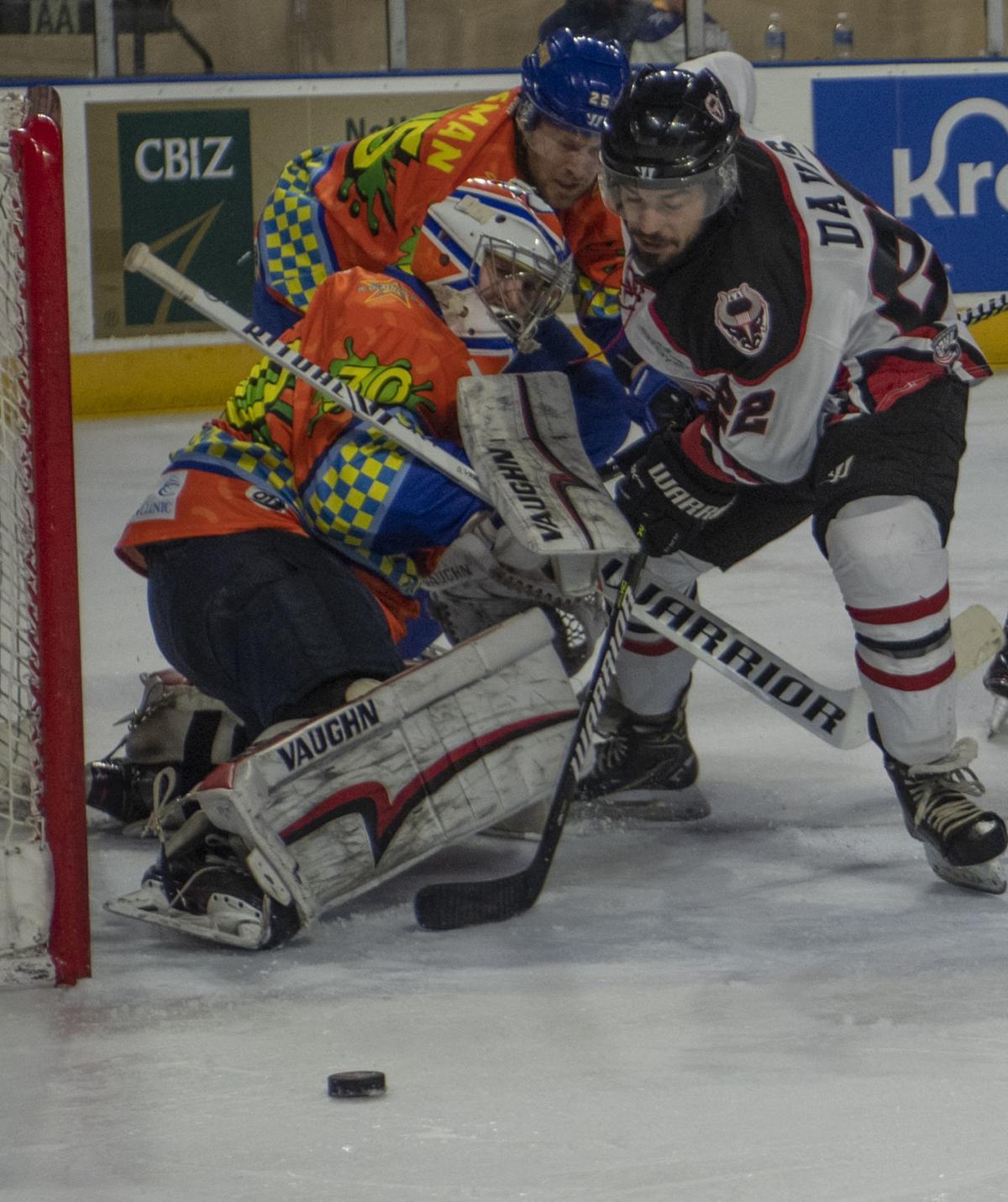 Rail Yard Dawgs goalie Henry Dill makes a save during the first period Friday against the Bulls’ Mike Davis. 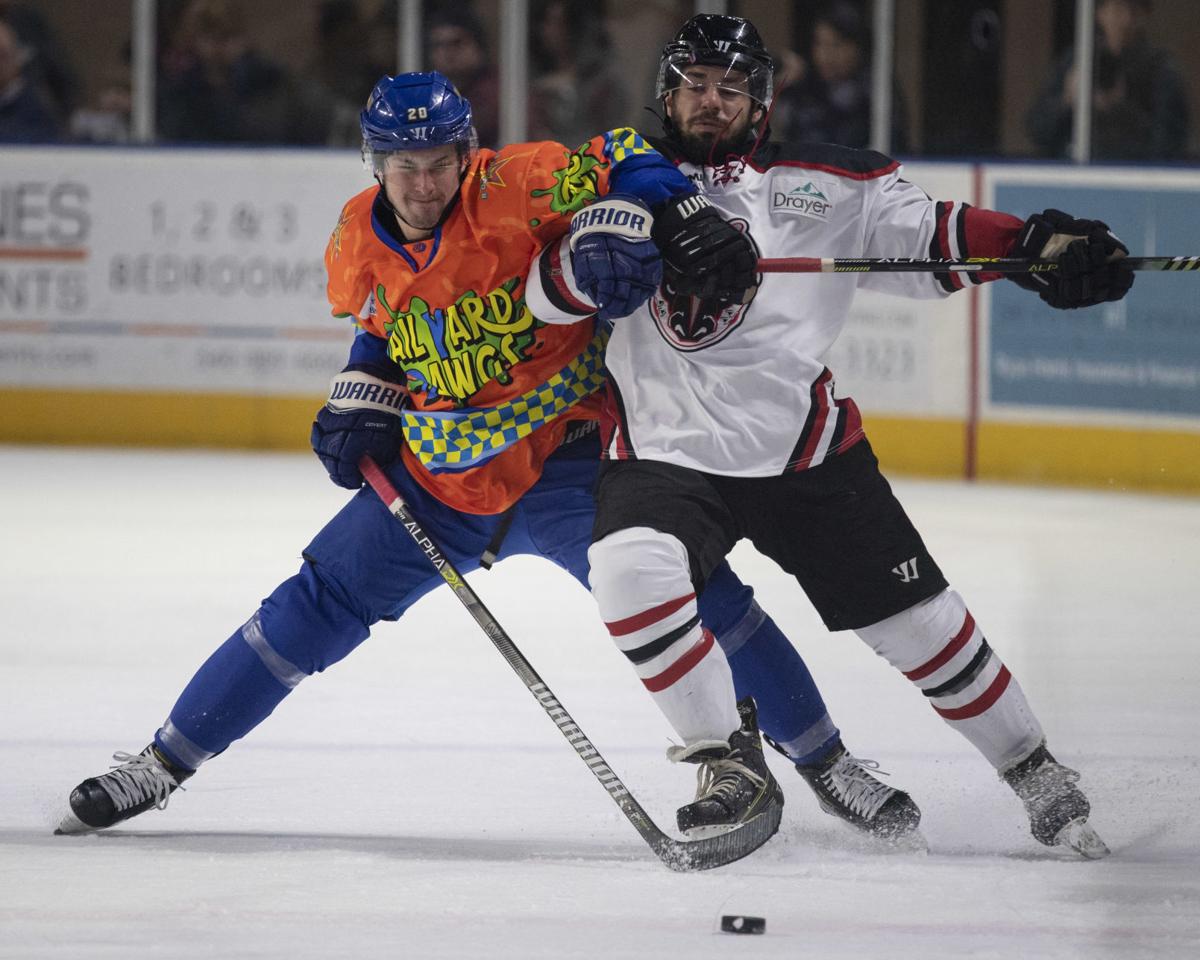 Rail Yard Dawgs forwards Brant Sherwood (center) and Jeff Jones (left) celebrate a goal against the Birmingham Bulls during the second period at the Berglund Center on Friday night in Roanoke. The Dawgs won 5-4 for their third straight victory to open 2020.

Rail Yard Dawgs goalie Henry Dill makes a save during the first period Friday against the Bulls’ Mike Davis.

They didn’t just bury the streak; they dumped a truckload of extra dirt on top of its grave.

After going 32 consecutive power plays without scoring — including their first three chances on Friday night — the Roanoke Rail Yard Dawgs netted three straight times with the extra skater to defeat the Birmingham Bulls 5-4 in front of an announced crowd of 4,248 at the Berglund Center.

“Oh, my gosh. It feels like a lot of weight off the shoulders,” Dawgs captain Travis Armstrong said. “We came out pretty hot in the season with our power play, everything was clicking. And then you go a few games without getting a goal, you start gripping your stick a little more. You start to make plays that aren’t really in your wheelhouse.

“For us to get a couple tonight is definitely big for us moving forward.”

Lincoln Griffin scored a pair of go-ahead goals for the Dawgs less than four minutes apart in the second period, helping Roanoke (8-13-4) win its third straight game to open 2020.

“I think the last 10 games or so we’ve all been on the same page,” Armstrong said. “It hadn’t been the results that we wanted in the first few, but I think with the new year we have a clean slate.”

The Dawgs had not scored on the power play since Dec. 12, and the frustrations continued when they went 0 for 2 in a scoreless first period and were thwarted again early in the second.

But with the game tied 1-1 midway through the second stanza, all the extra work Roanoke devoted to the power play in practice paid off.

Roanoke forward Austin Daae opened the season with the Bulls (7-14-4) and was familiar with their strategy on the penalty kill. He shared that information with Griffin, and they executed their plan to perfection.

“He said if I can get rid of the puck, get it down to him and beat the guy down the middle, I’ll have a shot,” Griffin said. “It ended up working out.”

It did, as Griffin took the perfect pass from Daae while streaking through the slot and put his shot past Birmingham goalie Artt Brey to give Roanoke the lead.

“Everything about that was a next-level play,” Roanoke coach Dan Bremner said. “With two guys on him, for Griff to not only get that shot off but the placement, too? It was a thing of beauty.”

Birmingham tied the game just 27 seconds later, but Griffin gave the Dawgs the lead for good with 6:28 left in the second when he stuffed home a juicy rebound.

As Bremner had predicted during the nettlesome streak, one goal with the man advantage was all the Dawgs would need to reignite their power play. Mac Jansen and Chris Lijdsman scored power-play goals on nearly identical shots from the blue line, with Lijdsman’s giving Roanoke a 5-3 lead with 10:28 left in the third.

“You draw up all kinds of plays, but as soon as the puck drops, everything’s an audible,” Bremner said. “We have some things that we want to look for, but at the end of the day, they were taking away a lot of our passing options. Our guys finally clued in that if they’re taking away those options, that means a lane to the net’s going to be open.”

Birmingham cut the deficit to 5-4 on a Josh Harris goal with 3:16 left, but the Dawgs held on for their first non-overtime or shootout result in four games.

CJ Stubbs scored the opening goal for the Dawgs, who were in high spirits as they boarded buses for an overnight trip to Alabama to face Birmingham on Saturday. Friday’s win pulled them out of a ninth-place tie with the Bulls in the SPHL standings.

“It’s a new year, a new season for us,” Griffin said. “We’re going the right way. I think we still can bear down at the net — especially when they have odd-man rushes, I think we need to work on that — but hopefully we can keep this train rolling.”