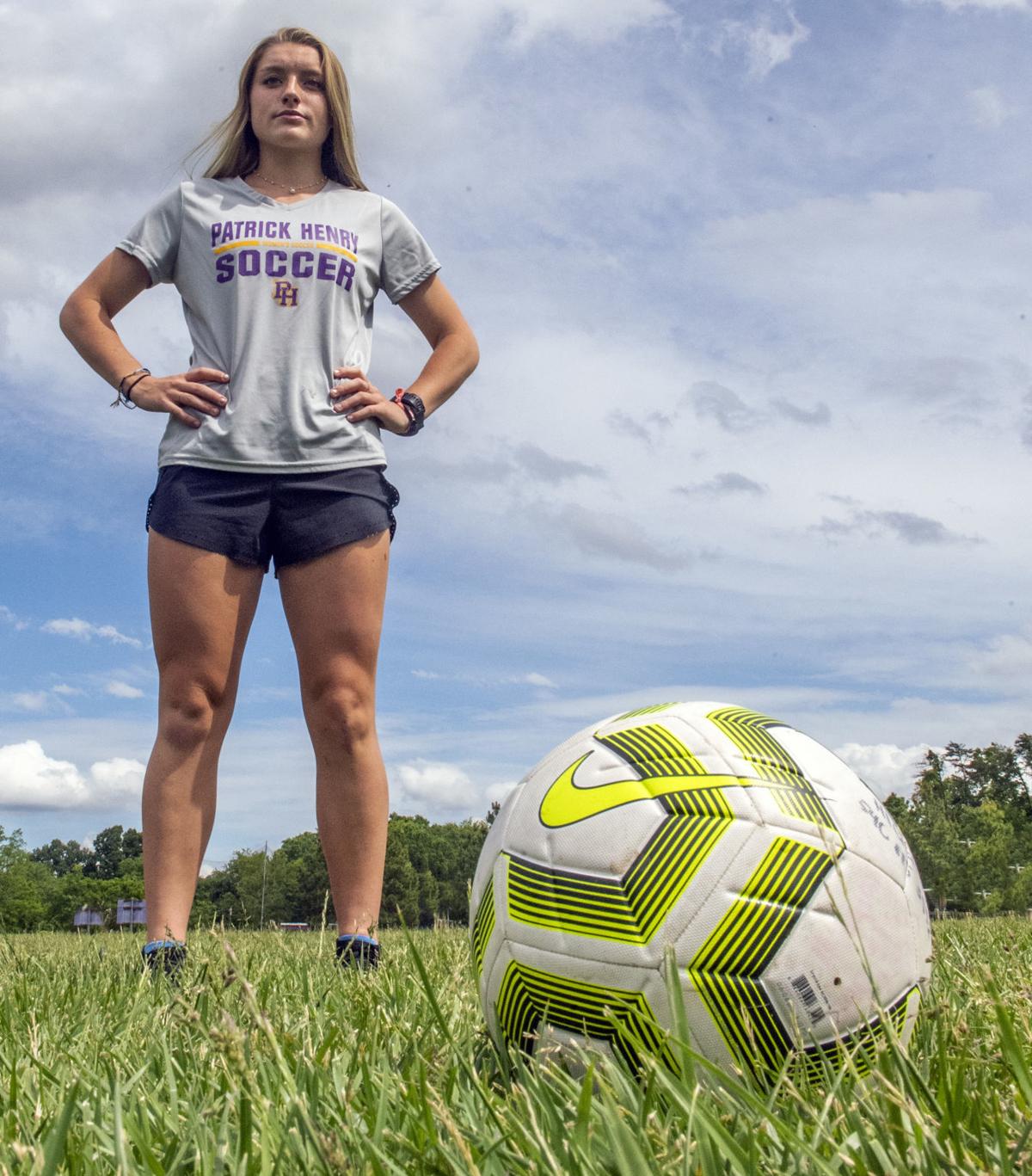 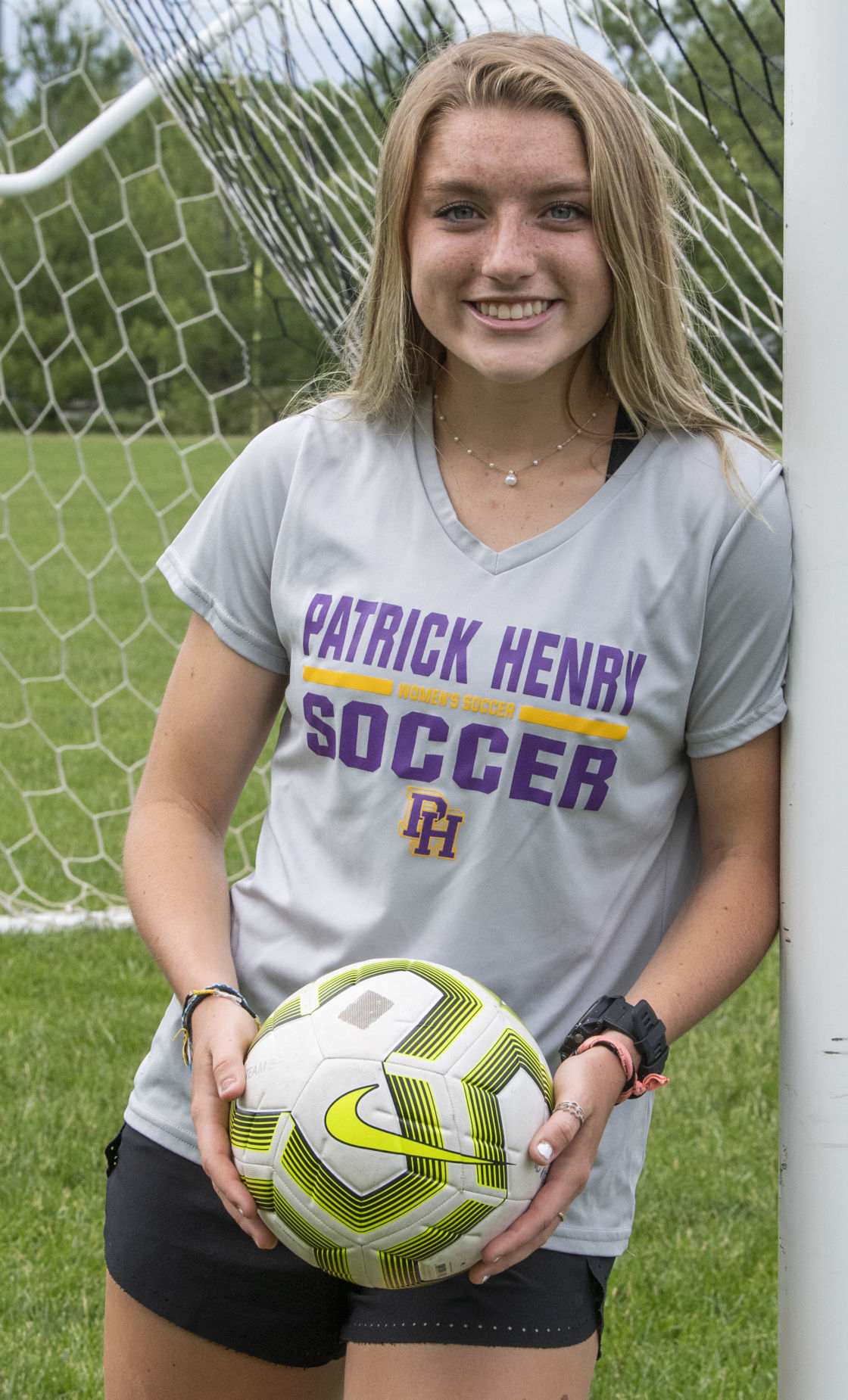 Patrick Henry soccer player Ella Higgins plans to attend VCU in the fall, where she will play soccer.

Patrick Henry soccer player Ella Higgins plans to attend VCU in the fall, where she will play soccer.

She needed a touchdown. No other choice.

The final 20 seconds were ticking off the clock in the 2018 Patrick Henry High School powderpuff football game. Ella Higgins had just caught a pass from the quarterback, her team of juniors was trailing, and she knew she had to score.

Anyone who’s met Higgins knows that rarely does she fall short of her goals. She’s a straight-A student with Governor’s School pedigree. She set two state age-group swimming records as a kid. And on the soccer field, where she is happiest, Higgins is a captain, a leader and a standout player at multiple positions.

“Whenever she gets the ball, she wants to go forward,” said Nick Boegemann, a VBR Star coach who’s worked with Higgins the past two years.

The same was true on the football field that autumn day.

This time, it cost her.

As she sprinted for the end zone, Higgins felt a pop in her left knee. She collapsed to the ground. Another player — one who had taken some sports medicine courses — rushed over to take a look.

“No way,” Higgins remembers thinking. “That’s not possible. I’ve worked so hard to keep up on my strength. That’s impossible.”

Turns out the amateur doctor was only partially right. Higgins did indeed have a torn anterior cruciate ligament. But she also had a torn meniscus and a fractured tibia. Essentially, the PH star’s left leg was in ruins, just as her college soccer recruiting process was about to intensify.

This is not a sob story. Yes, like all other spring-sports athletes who’ve had their senior seasons nixed by COVID-19, Ella Higgins is extremely disappointed. And given that she didn’t get to play for PH last year either because of her injury, Higgins has license to feel doubly ripped-off.

She doesn’t, though. That’s not how she is. She’s the type who moves forward.

“I’ve just been finishing up my school work and doing a lot of training and getting ready for VCU,” said Higgins, referring to the college where she is signed to play soccer this fall. “I just want to come in really fit and strong and show them what I’ve got.”

What she’s got is a glittering soccer and academic resume as well as a tale of perseverance.

Higgins, who started swimming at an early age, began playing soccer in elementary school on a rec team her father coached. She knew immediately that this sport was for her. The team dynamics gripped her.

She joined the Roanoke Star (now the VBR Star) Soccer Club as a fifth-grader and saw both her skills and her love of the game flourish.

“Swimming is pretty much my secret sauce,” Higgins said. “That’s how my parents like to say it. It’s one of those things that helps you build up your endurance, but it also works on every muscle of your body. It works on your legs. It works on your arms, your core.

“Playing soccer, most people think you just need huge legs, but you also need your core and upper body to push off opponents who are trying to take the ball from you, or to quickly get back up after getting knocked over. It just kind of gave me this Energizer Bunny sort of endurance. I was able to run the entire 90 minutes without getting tired.”

That made her a star on the pitch. Three straight summers beginning in 2016, Higgins traveled to Sweden to compete in the Gothia Cup, the largest international youth soccer tournament in the world. The first two opportunities came with VBR Star. In the last one, she captained a multi-state select team called CCL United.

High school was just as good. She made the PH varsity as a freshman and scored nine goals.

“I knew right away,” PH coach Carrie O’Keeffe said. “I knew that she was capable of playing next level and being a D-1 athlete. It’s not just her skills, but the way she plays and her mentality. I was impressed with her from the first time I saw her as a freshman.”

As a sophomore, despite some minor injuries, Higgins earned first team all-region honors after netting 16 times. The college trajectory was perfect.

And then, of all things, powderpuff football intervened.

Her doctor performed surgery in early November of 2018. Higgins was fitted with a bulky brace that prevented her from walking for six weeks.

“It definitely was not an easy physical or mental recovery that first month and a half,” she said. “I wanted to play soccer in college. I knew that was kind of a gray area. I didn’t know when I was going to be back on the field. I wasn’t sure what to tell these coaches. But I just knew that I had to keep my academics up in order to keep that as an option.”

VCU, which had begun discussions with her the previous summer, told her to stay in contact. Higgins sent weekly reports on her rehab to VCU coach Lindsey Martin.

“As the months went by, I just kept my head up,” Higgins said. “I kept working in PT, doing everything I could at home with the ball, without the ball. As soon as soccer season came around for PH in the spring [of 2019], I knew I had to be there for my teammates even though I wouldn’t be able to play.”

She finally had the chance to return to the field in the fall of 2019 with her club team. Higgins was terrified that she would re-injure the leg or not be the same, but Boegemann reassured her that all the work she’d put in had prepared her.

“I think a lot of it was just mental,” Boegemann said. “When she got back into a rhythm, she’s a strong personality and I think she hit the ground running. I think she understood that she needed to be very intentional about the time she had left in her youth soccer career. I thought she handled herself very maturely for her age and had a great fall season.”

It climaxed in December. Martin called Higgins and said that VCU coaches were coming to watch her play in a club tournament.

“This was my last game of the season,” Higgins said. “I thought, ‘Oh, boy, this is like the final evaluation. I’ve really got to show them what I’ve got here.’ Of course, this is like a four-game tournament and we’re all exhausted. I told my team, ‘Guys, we’ve got to do whatever we can to play well here.’ And we ended up playing really well.”

The next day, Martin called Higgins and offered a spot on the VCU team. Higgins committed about a week later and signed with the Rams in January.

With that goal checked off, the 2020 high school season held the promise of ease and enjoyment for Higgins. The Patriots, who had seven seniors, played just one scrimmage before the season was shut down.

“Playing for Carrie and the high school team is so fun,” Higgins said. “The girls on that team, we’re just so tight. Just being on that field together, it’s like a dream. You’re there with 10 of your best friends and you’re having the time of your life, win or lose.”

Higgins also had been looking forward to playing with her younger sister, Clara, who’d made the PH varsity team as a freshman last year. While disappointed, both siblings are making the best of it.

“She’s been my training buddy through all of this,” Ella Higgins said. “I’ve just been throwing her outside, ‘Welp, we’ve got to go for a run!’ She’s like, ‘How long?’