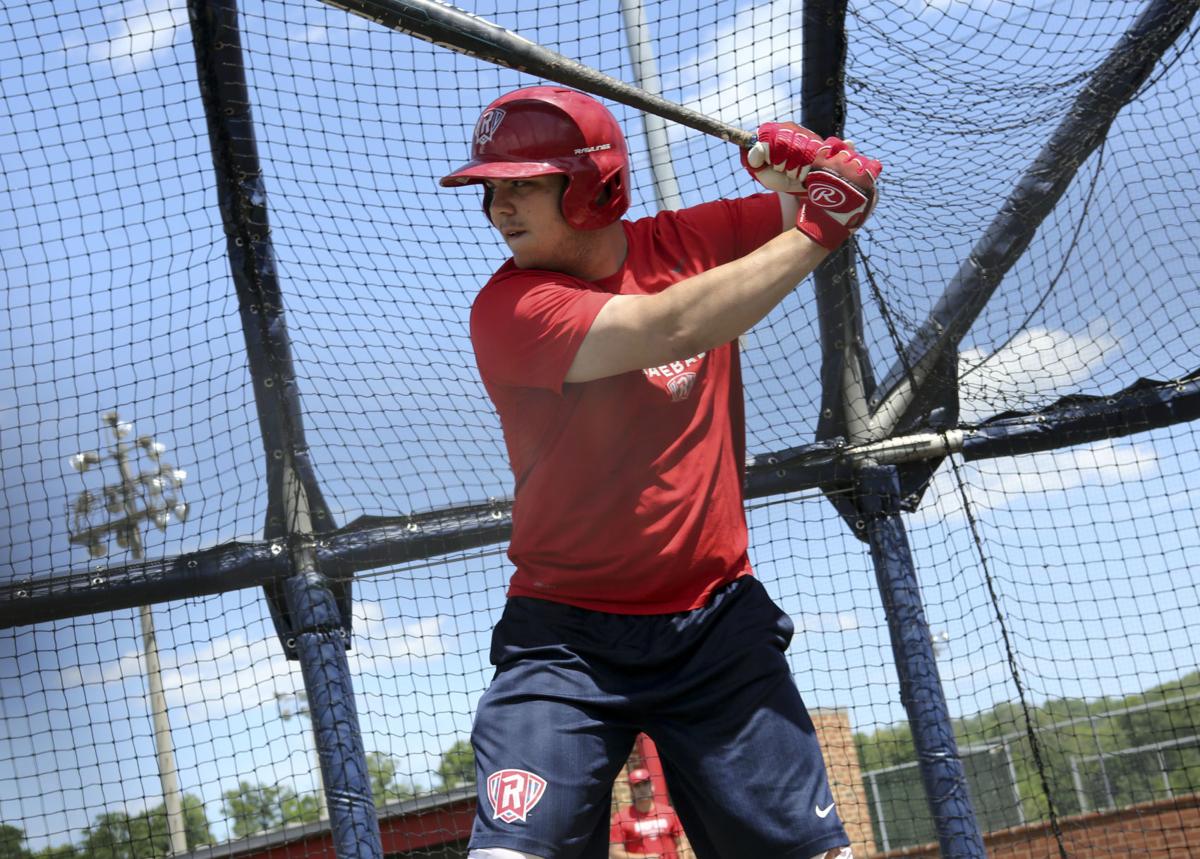 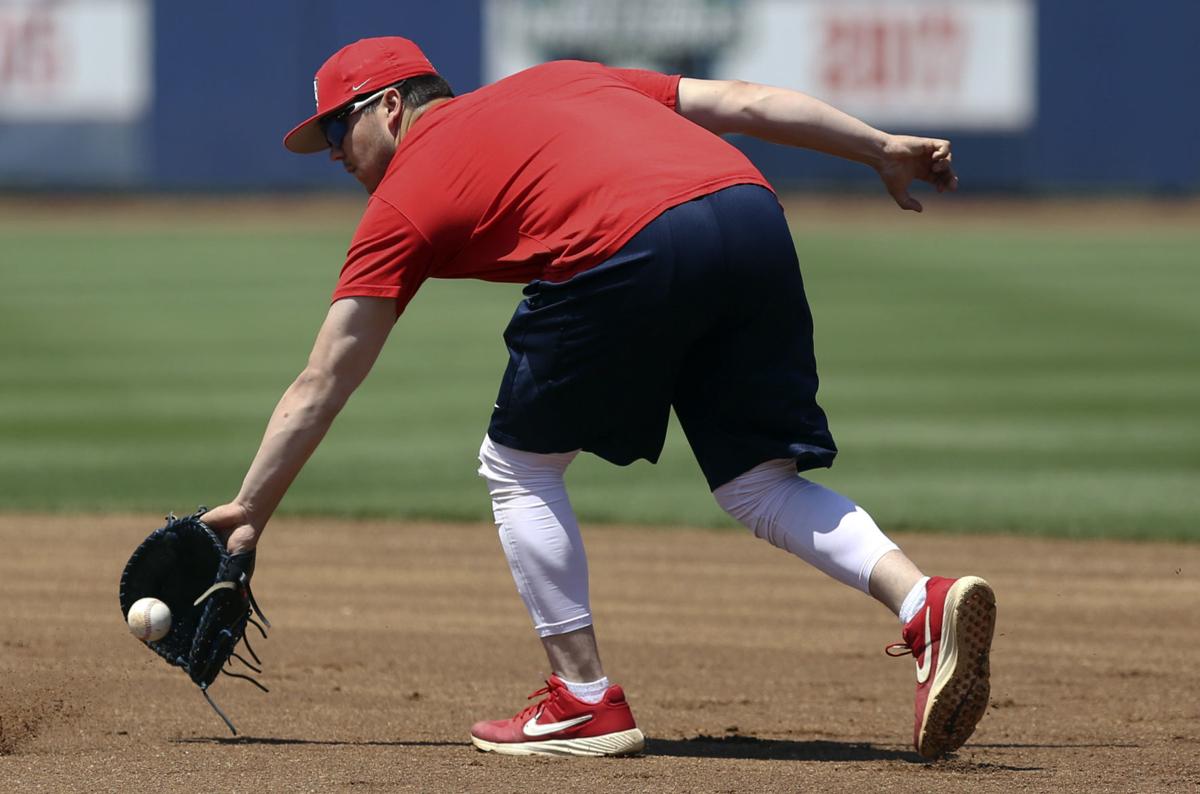 J.D. Mundy started at first base for Radford early this season before being moved to designated hitter.

J.D. Mundy started at first base for Radford early this season before being moved to designated hitter.

RADFORD — J.D. Mundy is a fearsome slugger for the Radford University baseball team.

The Northside High School graduate is not the first member of his family to fill that role.

Mundy is the nephew of former Highlanders star and ex-minor leaguer Kelly Dampeer.

Mundy considers the ex-shortstop to be his mentor.

“Growing up, my uncle always helped me out — hitting, fielding, whatever I needed,” Mundy said this week. “He knows all there is to know about playing baseball.”

Mundy, a Virginia Tech transfer, has made a big impact in his first season at Radford. The junior designated hitter made the All-Big South first team Monday, just like Dampeer once did.

“He can swing a broomstick and hit it over the fence,” Dampeer said of Mundy. “He’s very strong.”

Twenty-two years ago, Dampeer was chosen in the Major League Baseball amateur draft.

Radford coach Joe Raccuia expects Mundy will be chosen as well — either in the 2019 draft next month or in the 2020 draft.

“He’s one of the most dangerous hitters I’ve ever coached,” Raccuia said.

“His passion was evident,” said Dampeer, a Northside graduate who is in his first year as Northside’s baseball coach. “When he became very serious about it, I was happy to help.”

Dampeer, who played for Radford from 1994-97, still shares the program’s career record for homers (38).

Mundy is now a Highlander himself, but he continues to turn to his uncle for tips.

“Early in the year, I needed help with my swing,” Mundy said. “I just called him up and we came in here [to Radford’s indoor practice facility] and hit, and ever since then I’ve just started swinging a lot better.”

Mundy was recruited by both Radford and Virginia Tech when he was in high school. Enamored with Tech’s facilities, Mundy picked the Hokies after reaping a partial scholarship offer.

He hit .550 as a Northside senior third baseman in 2016, when he was named the Timesland player of the year.

“He knows which pitches to swing at, whereas I was overaggressive,” Dampeer said. “I never really learned the strike zone, and I think I probably pressed that on him at a young age.”

Mundy belted five homers for Tech in 2017, which was Patrick Mason’s final season as the Hokies’ coach before being fired.

He started 38 games for Tech coach John Szefc last year, including 27 at first base and 11 at designated hitter. He batted .257 with seven homers. In ACC play, he led the squad in batting (.317) and homers (five).

Mundy said that at his end-of-season meeting with Szefc, the coach told him he would DH in 2019 but would not be the starting first baseman. Mundy wanted to play in the field.

He said Szefc also planned to reduce the amount of his scholarship.

“It was the best decision for me and my family,” he said.

Szefc said last summer that he did not want to discuss his conversation with Mundy but that Mundy was “a great guy.”

Dampeer called his former Radford teammate — Raccuia — to tell him Mundy was looking for a new school.

Mundy visited Radford and James Madison before picking the Highlanders last June. He said his partial scholarship at Radford is larger than what it would have been had he stayed at Tech.

Raccuia assumed Mundy would have to sit out the 2019 season under the NCAA’s transfer rules.

But later in the summer, Raccuia ran into former Hokies coach and current Kansas State coach Pete Hughes. Hughes told him he had just added two transfers from Virginia Tech and that the NCAA had granted waivers enabling them to play in 2019 without having to sit out a year. He advised Raccuia to seek a waiver for Mundy.

“[Tech] cut his scholarship … down to 25 percent,” Raccuia said. “We went to the NCAA and we appealed [for a waiver on] the fact that they cut his scholarship and he didn’t do anything [wrong] and they just wanted to free up more money for other guys; that’s their right. So we appealed it, and it got approved right away. Tech supported it.”

The 6-foot, 220-pound Mundy began this season as Radford’s starting first baseman. But after seven games, Raccuia moved him to designated hitter as part of a lineup shuffle.

“J.D. wasn’t reacting quick enough at first [base],” Raccuia said. “He needs to put more effort into his defense.

“I don’t want him not to play in professional baseball. This kid can hit. But if you tag yourself as just an offensive player, there’s a ton of those guys. He’s going to have to go handle himself defensively.”

Mundy struggled at the plate during the first half of the season. Raccuia said he was too worried about pulling the ball to impress pro scouts.

“He was trying to get drafted — his swing was too big,” Raccuia said.

Mundy also had to deal with a bevy of inside pitches.

“Power hitters don’t like the ball in,” Raccuia said. “So we started talking about how to … not worry about pulling it.

“Once he started in the middle of the year to figure that out and go back to his strength, which is [hitting to] the opposite field, he’s just been ridiculous.”

“I kind of have a better understanding of what I want to do when I get in the box, … not swinging at off-speed [pitches] early, … knowing what the pitcher’s trying to get me out on,” Mundy said.

“He legitimately is a freak, with power, hand-eye coordination, balance,” Raccuia said. “When he sticks to his approach, there’s not a better hitter in this league.”

Mundy said he is glad he transferred to the Highlanders (29-25, 19-8), who will begin play in the Big South tournament Wednesday in Fayetteville, North Carolina. Radford is the No. 2 seed.

“I love playing for this team,” he said.

Dampeer is glad his nephew is doing so well this year.

“I’m just happy for him,” Dampeer said. “It’s just a bonus that it’s at Radford, where I really call home.”

Although Mundy has his sights set on pro ball, he hopes to eventually become a coach — just like his uncle.

At Northside: hit .550 as a senior third baseman in 2016, when he was named the Timesland player of the year.

Family ties: uncle Kelly Dampeer, an ex-Radford star and former minor leaguer, is the Northside baseball coach; cousin Hannah Mundy is a Lord Botetourt graduate who is on the Longwood softball team; cousin Kasey Draper of Northside has committed to play basketball for Roanoke College.