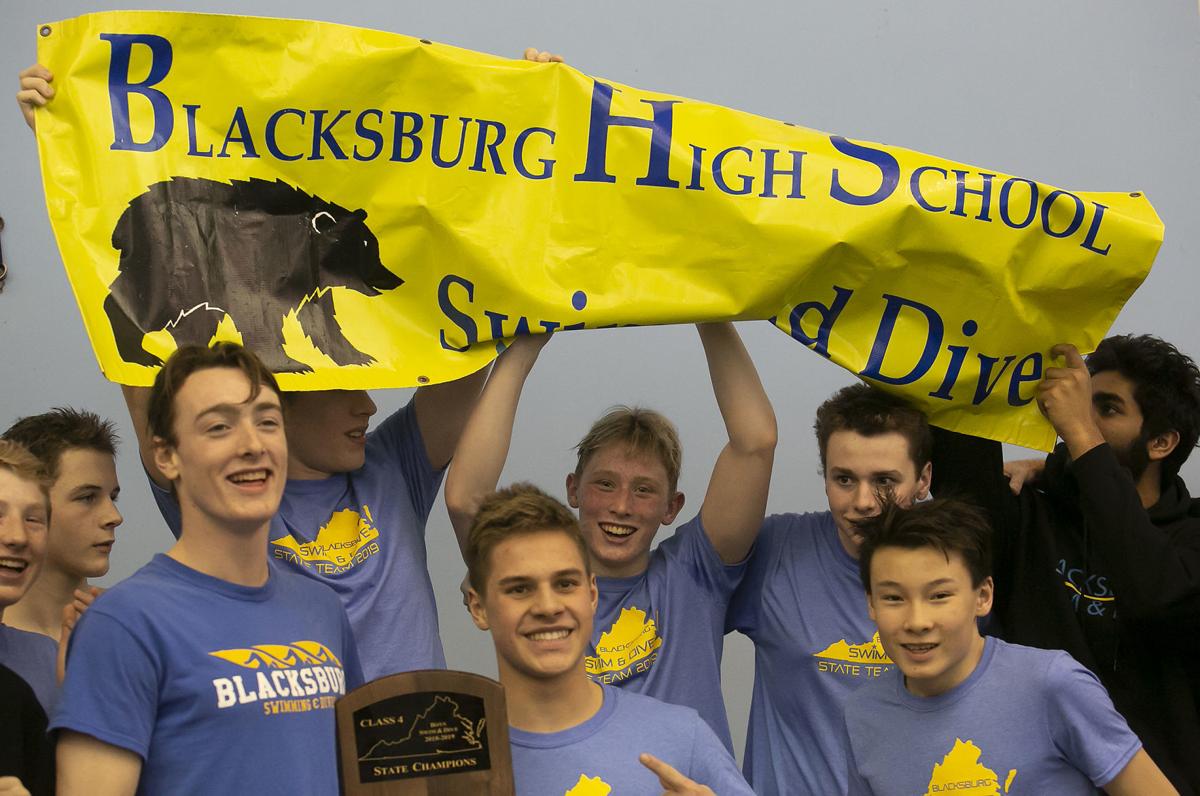 Blacksburg’s boys take possession of the trophy after winning the VHSL’s Class 4 swim and dive championship Friday night in Richmond. 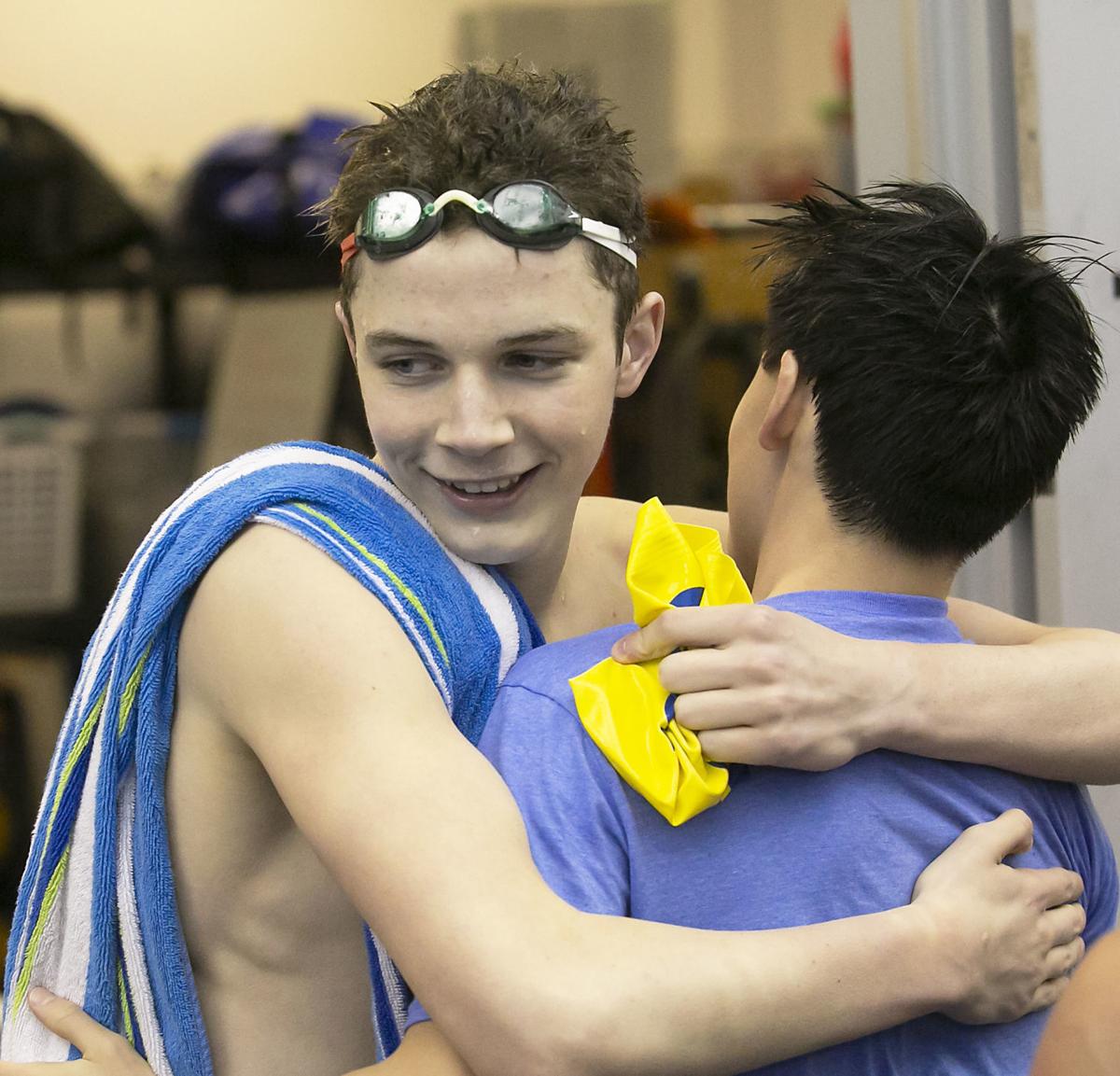 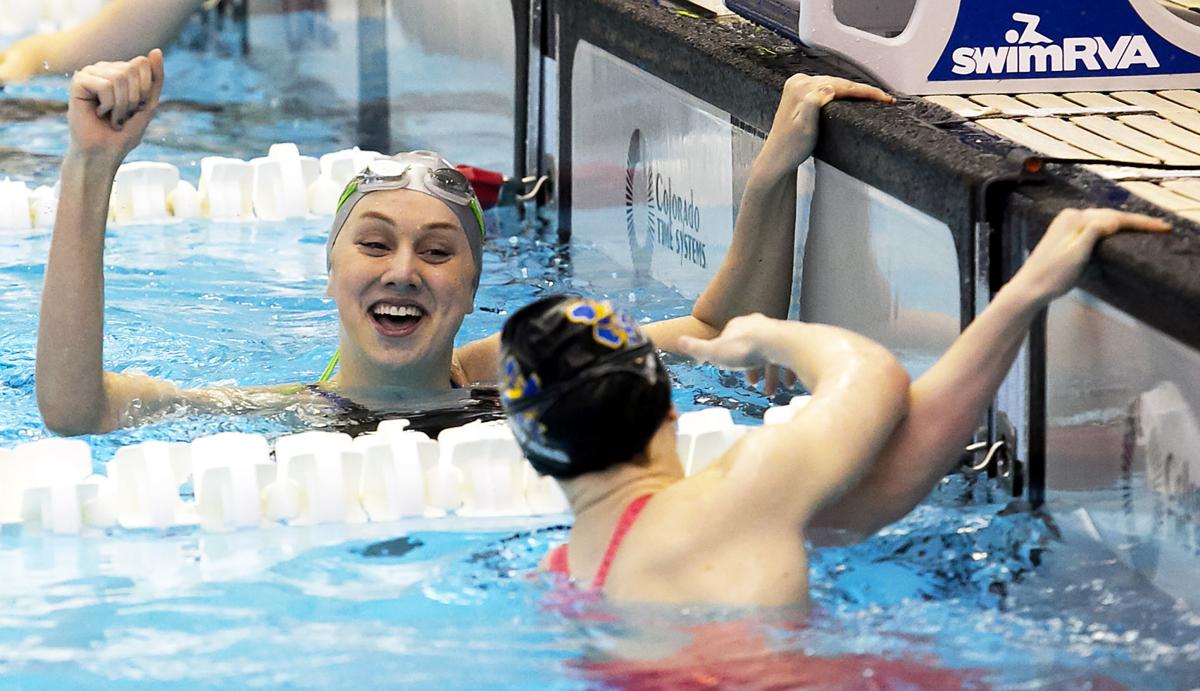 Tara Enneking of Jefferson Forest (left) exults after her victory in the girls 50-yard freestyle at the Class 4 state swim and dive meet in Richmond Friday night.

Blacksburg’s boys take possession of the trophy after winning the VHSL’s Class 4 swim and dive championship Friday night in Richmond.

Tara Enneking of Jefferson Forest (left) exults after her victory in the girls 50-yard freestyle at the Class 4 state swim and dive meet in Richmond Friday night.

“This is our first state championship,” said Chris Reilly, whose BHS boys captured the VHSL’s Class 4 title at the SwimRVA aquatic center. “There’s an open spot on the gym wall for a banner and we’re going to fill it with a big, beautiful banner.”

Depth and diving were the keys for Reilly’s Bruins, who didn’t win an individual event but piled up points whenever possible. They received a major boost from their divers, who were led by state runner-up Stephen Case. BHS divers also finished third and fourth.

“Thank goodness it’s swim and dive,” said Reilly. “If it was just ‘swim,’ we wouldn’t have won.”

With three events remaining, Lafayette and Jefferson Forest were tied for first with 157 points, putting them one point ahead of third-place Jamestown and two points ahead of Blacksburg.

“We got a big boost in the breaststroke when Sam Sterling finished third,” Reilly said. “We’d still have lost, though, if our last relay had been disqualified or didn’t have a good swim.”

The sixth-seeded Bruins did better than that, claiming third place to lock out Lafayette, which won the event. Sterling returned for a leg and was joined by Lewis Rockwell, Leo Yang and sophomore anchorman Nick Zolovick.

The Bruins also exceeded expectations in the girls meet, finishing second with 215.5 points. They were, however, kept at arm’s length by winner Monacan of Chesterfield County. The Chieftains finished first or second in every relay en route to amassing 282.5 points.

Some other meet highlights:

• Jefferson Forest swept the two 50-yard freestyles, with Matt Davidson winning the boys race in 20.88 and Tara Enneking touching in 24.01 to take the girls gold medal.

Both are seniors. Davidson will be swimming for hometown Liberty University next fall while Enneking has accepted a grant-in-aid from Old Dominion.

Both also collected a silver medal along with their gold. Matched against University of Virginia signee Sean Conway of Loudoun Valley in the boys 100 free, Davidson’s second-place time of 44.96 was a lifetime best and earned him All-American status. Conway won in a Class 4 and state record 44.29.

Enneking (1:03.83) was second-best in the 100 breaststroke, finishing six tenths of a second behind winner Colby Hurt of Lafayette.

“The 100 breast is probably my best event, but I like the challenge of the 50 free,” Enneking. “It’s so short that you can’t make a mistake and win. I actually enjoy that kind of pressure.”

• Forrest Webb of Carroll County, a senior bound for Virginia Tech, closed his high school career with his first state title, winning the boys 100 backstroke in 49.41, under the All-America qualifying time of 49.53.

“It’s my first state title and I can tell you that a lot of hard work went into it,” Webb said. “I’ve worked hard, stayed focused and this was the reward.”

• Salem’s two second-places came by frustratingly narrow margins. In the 500 free, Lawson stalked winner Christopher Kostelni of Lafayette until the final 25 yards, when he made a determined bid for the lead. After Lawson drew nearly even, however, Kostelni won in a Class 4-record 4:27.85. Lawson hit the wall in 4:28.89, just missing the All-American standard of 4:28.75.

In the freestyle sprint relay, the Spartans came home in 1:28.02, only 0.17 behind the winners from Midlothian.