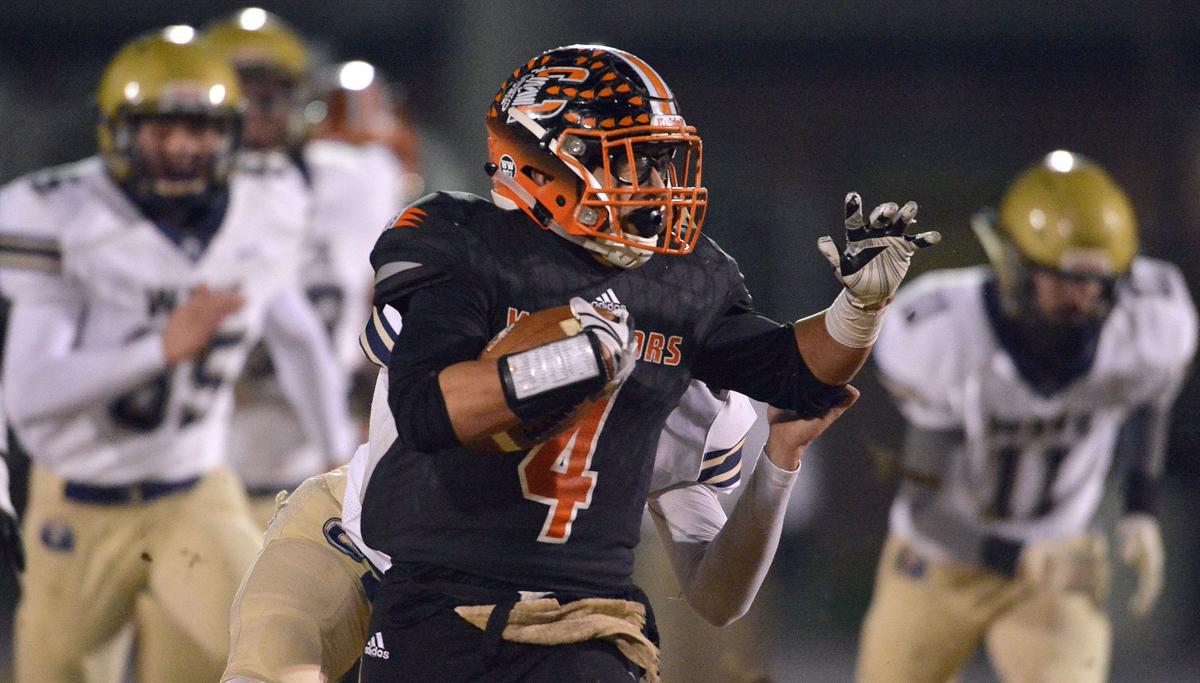 Chilhowie's Greg Sanchez gets another big first down on Grundy's defense during the second round of Region 1D playoffs Friday night. 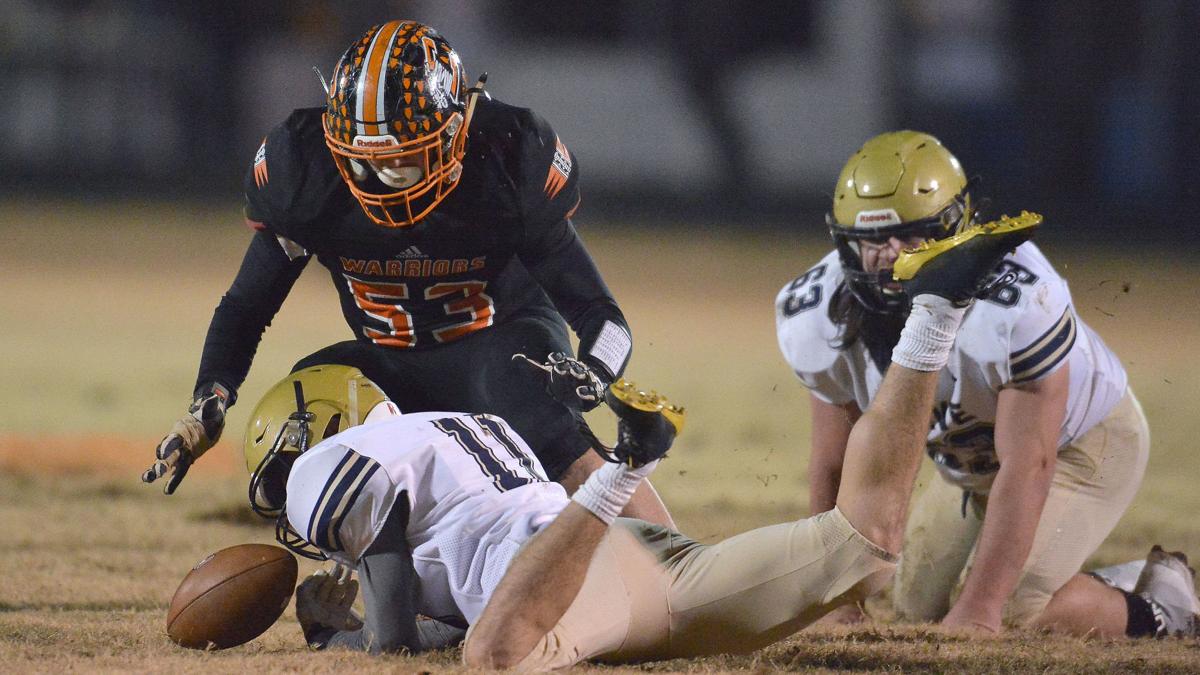 Grundy's Jake McCoy and Chilhowie's Isaac Pennington react to a Chilhowie fumble Friday night during the second round of Region 1D playoffs.

Chilhowie's Greg Sanchez gets another big first down on Grundy's defense during the second round of Region 1D playoffs Friday night.

Grundy's Jake McCoy and Chilhowie's Isaac Pennington react to a Chilhowie fumble Friday night during the second round of Region 1D playoffs.

With the defense holding workhorse Gabe Fiser of the Golden Wave in check and the offense scoring early and often, the Chilhowie Warriors cruised to a 63-14 victory on Friday night in the second round of the VHSL Region 1D football playoffs.

Chilhowie finished with 610 yards of total offense in a performance which produced a season-high point total for the Hogoheegee District champions.

“They are as strong as advertised,” said Grundy coach Craig Plymal.

It didn’t take long for Chilhowie to impose its will.

Fiser fumbled on the third play of the game and Chilhowie’s Malachi Thomas scooped it up and returned it deep into Golden Wave territory. On the first offensive play of the game for the Warriors, Greg Sanchez eluded several tacklers in ripping off an 18-yard touchdown run as Chilhowie grabbed an 8-0 lead with 10:56 remaining in the first quarter.

Sanchez scored three first-quarter touchdowns and finished with 201 rushing yards on just 11 carries. The smooth senior certainly stole the spotlight in a matchup between two of the area’s best ball-carriers.

Fiser entered the game with 2,432 rushing yards this year and 4,448 for his career and gone over the 300-yard mark on three occasions in 2018. He was limited to 96 yards on 23 carries Friday night and did not reach the end zone.

“I said I wanted a lot of bodies around the ball tonight, and we suffocated them,” said Chilhowie coach Jeff Robinson.

Did he feel sort of overlooked with all the attention given to his counterpart?

“Kinda,” Sanchez said. “Nobody really talked about me or our running game [this week], but it is what it is. Fiser is a good running back and has done a lot of things this year, but we just came out ready to play.”

Chilhowie led 21-0 after the first quarter and 42-6 at halftime.

“We thought we needed to keep the ball more,” Plymal said. “We ran 41 first-half plays and thought that’s what we needed. We probably needed to run 80 plays in the first half against them. You’ve just got to keep them off the field. That initial fumble really hurt and Sanchez is such a patient runner.”

Grundy (7-5) couldn’t come up with any key stops either.

Chilhowie quarterback Zack Cale rushed for 44 yards on nine carries and two touchdowns, while also throwing a 16-yard scoring strike to Sanchez and an 87-yard TD pass to Anthony Blevins.

Will Russell and Jonathan Gilley also tacked on touchdown runs, while Chilhowie capped the scoring with 5:04 remaining when backup quarterback Logan Adams hooked up with Malachi Thomas on a 78-yard touchdown toss.

“I would absolutely hate to come up with a gameplan to defend us,” Robinson said. “Our offense showed what they could do and we unleashed the passing game. To have so many weapons on offense is a luxury that we’ve been blessed with.”

“I love our team and we always rise to the occasion,” said Branson, a fearless and hard-hitting linebacker. “I definitely think we upped our game. Team chemistry is a big part of it as most of us have played together since the fourth and fifth grade.”

Chilhowie had allowed just one touchdown pass in its first 11 games of the season.

“We obviously were run-heavy this week in what we practiced on defense,” Robinson said. “McCoy was pretty good tonight and he made things happen. I’m still proud of the defense.”

Chilhowie will play the winner of today’s matchup between J.I. Burton and PH-Glade Spring. The Warriors own wins against both teams this season, having beaten Burton, 49-14, and posted a 46-23 victory over PH.

“ I’m looking forward to the rematch,” Robinson said. “Whoever it may be.”

Regardless the opponent, everybody knows who the favorite will be.