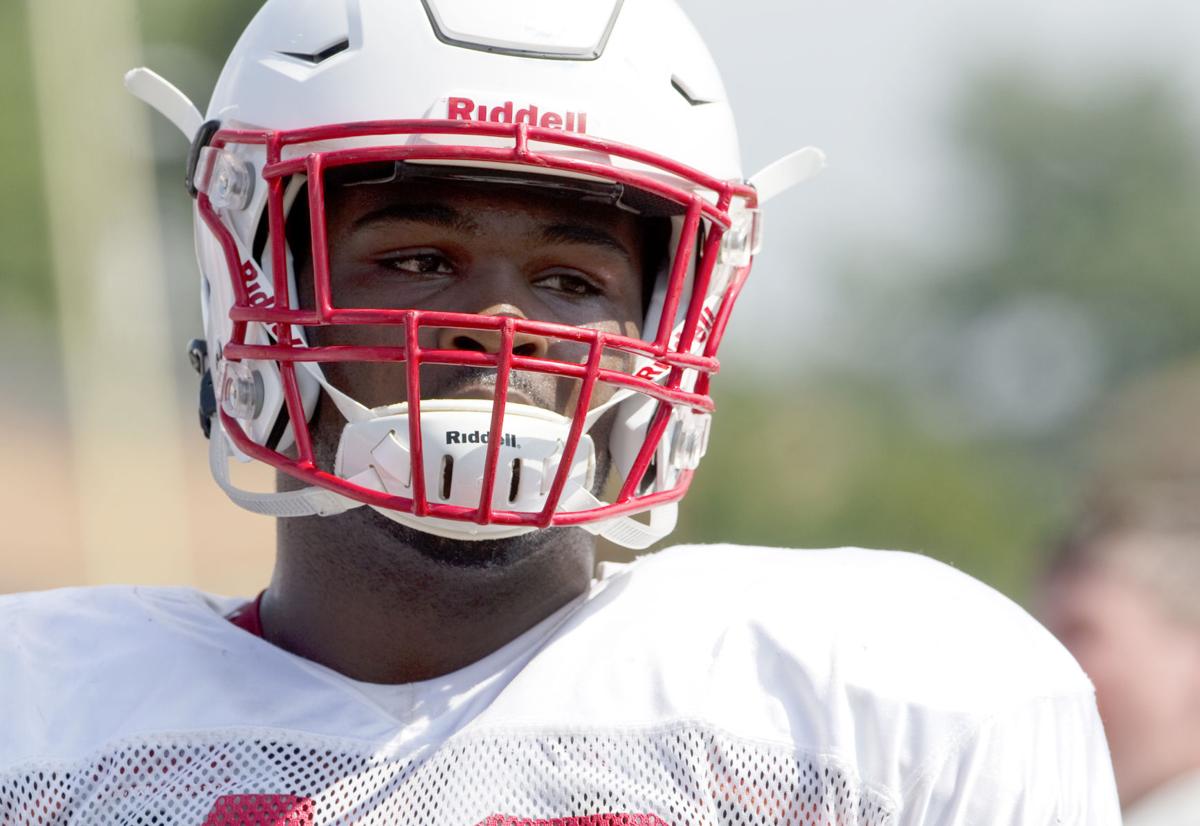 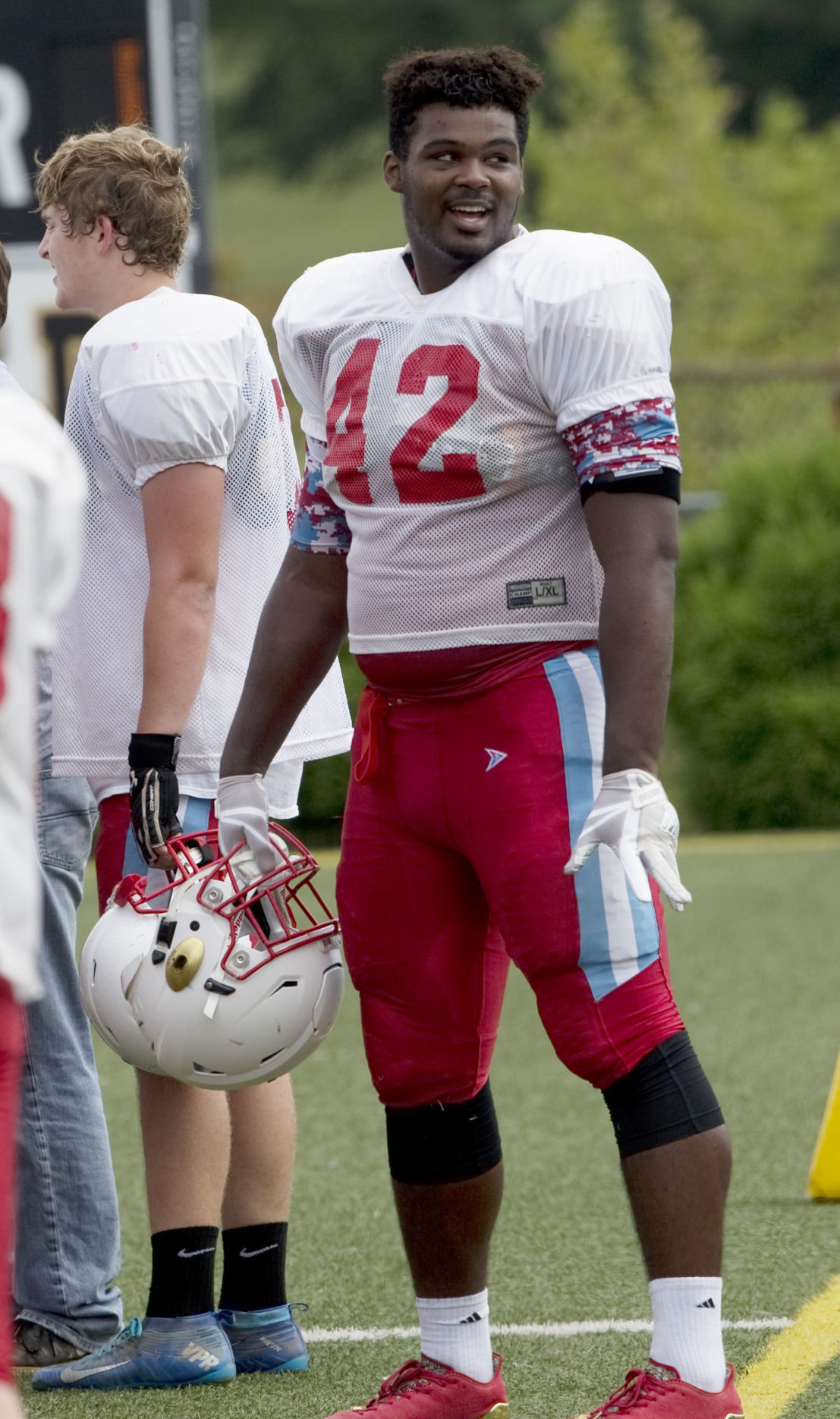 K is for KIP. The colleges have their eyes on Giles sophomore Kip Green, at 6-4, 286 pounds. 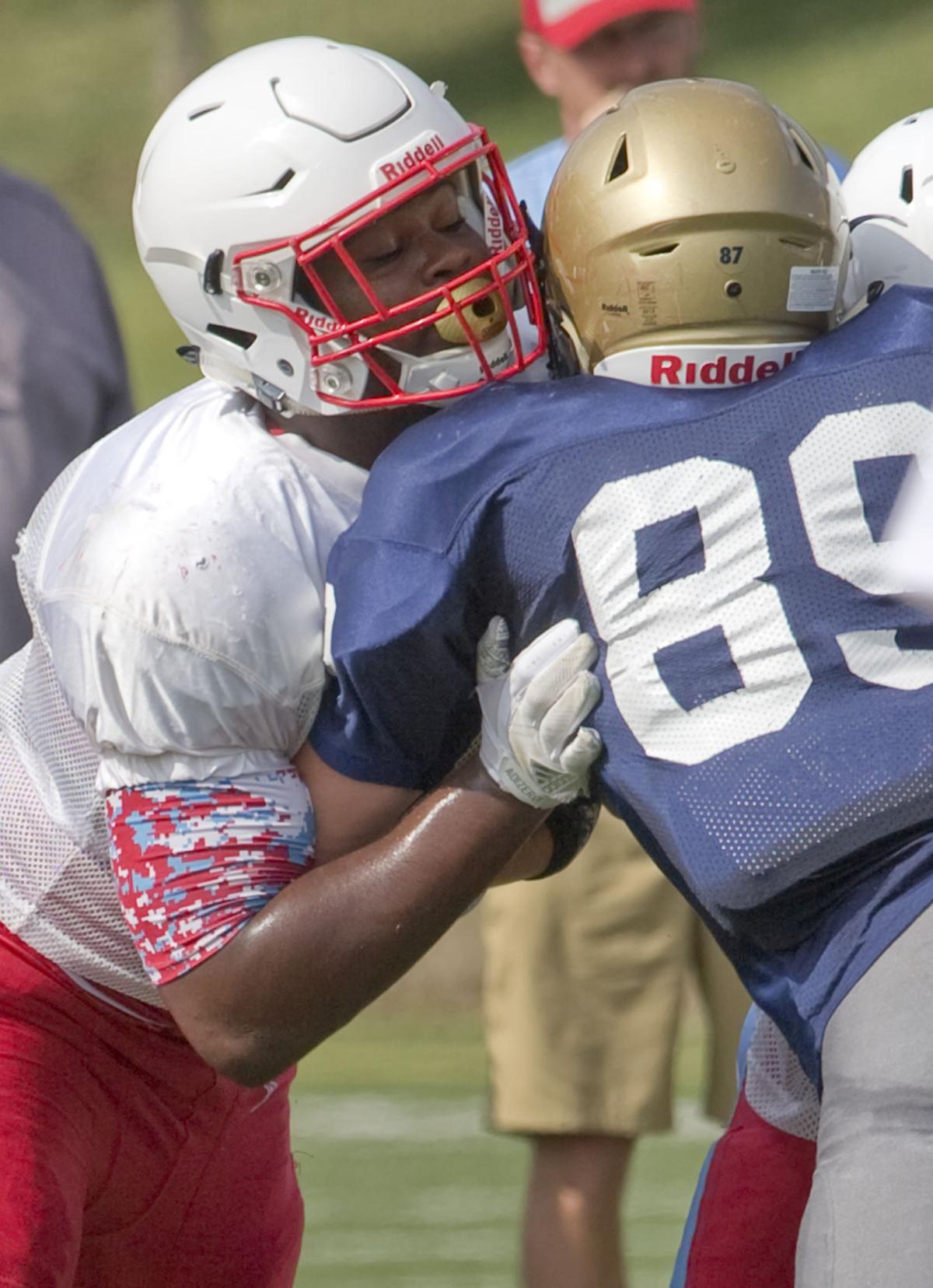 Giles lineman Kip Green throws a block during a preseason scrimmage with Hidden Valley at Bogle Field on Friday. Giles has six returning starters on defense led by the 6-foot-4, 284-pound Green. 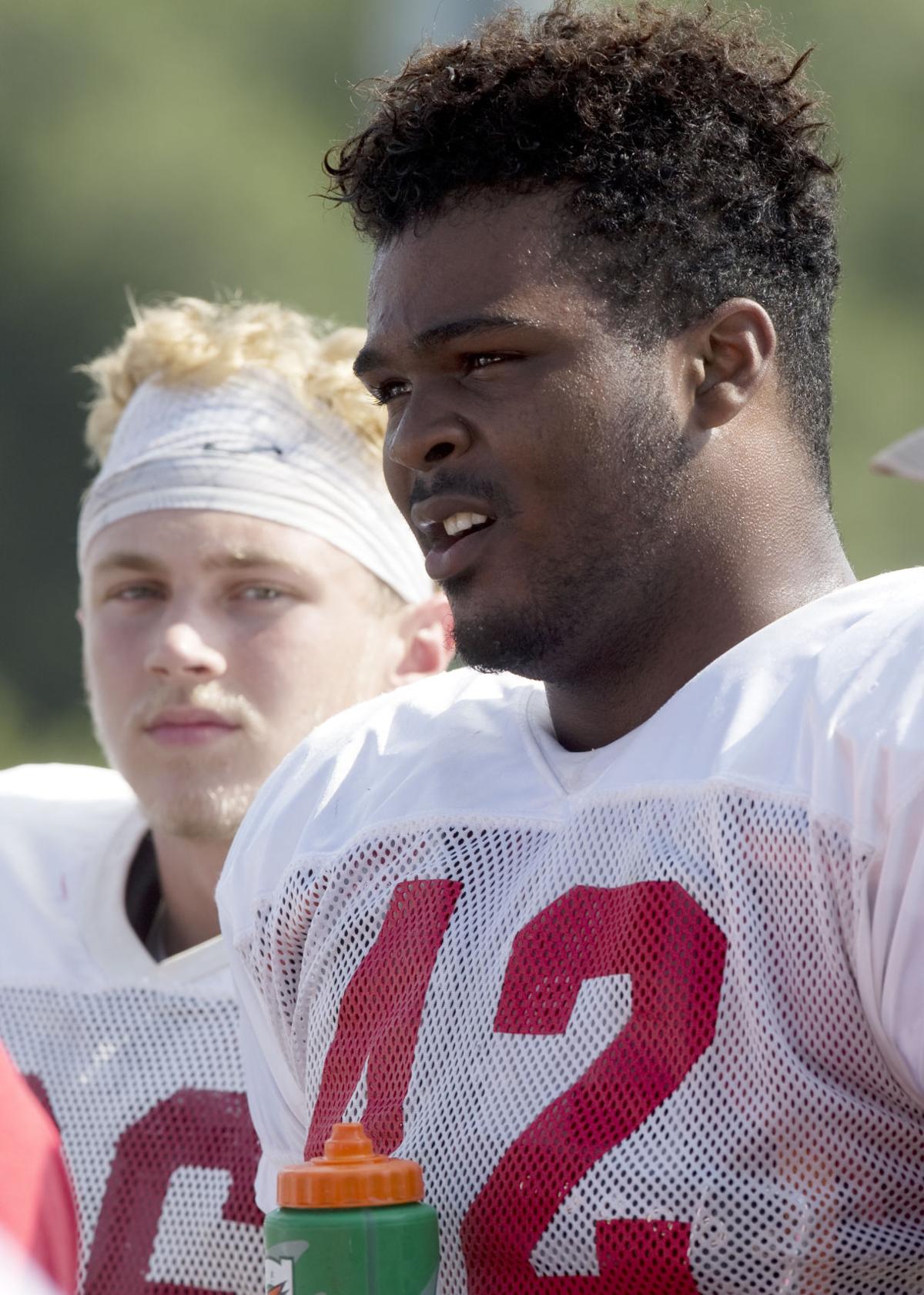 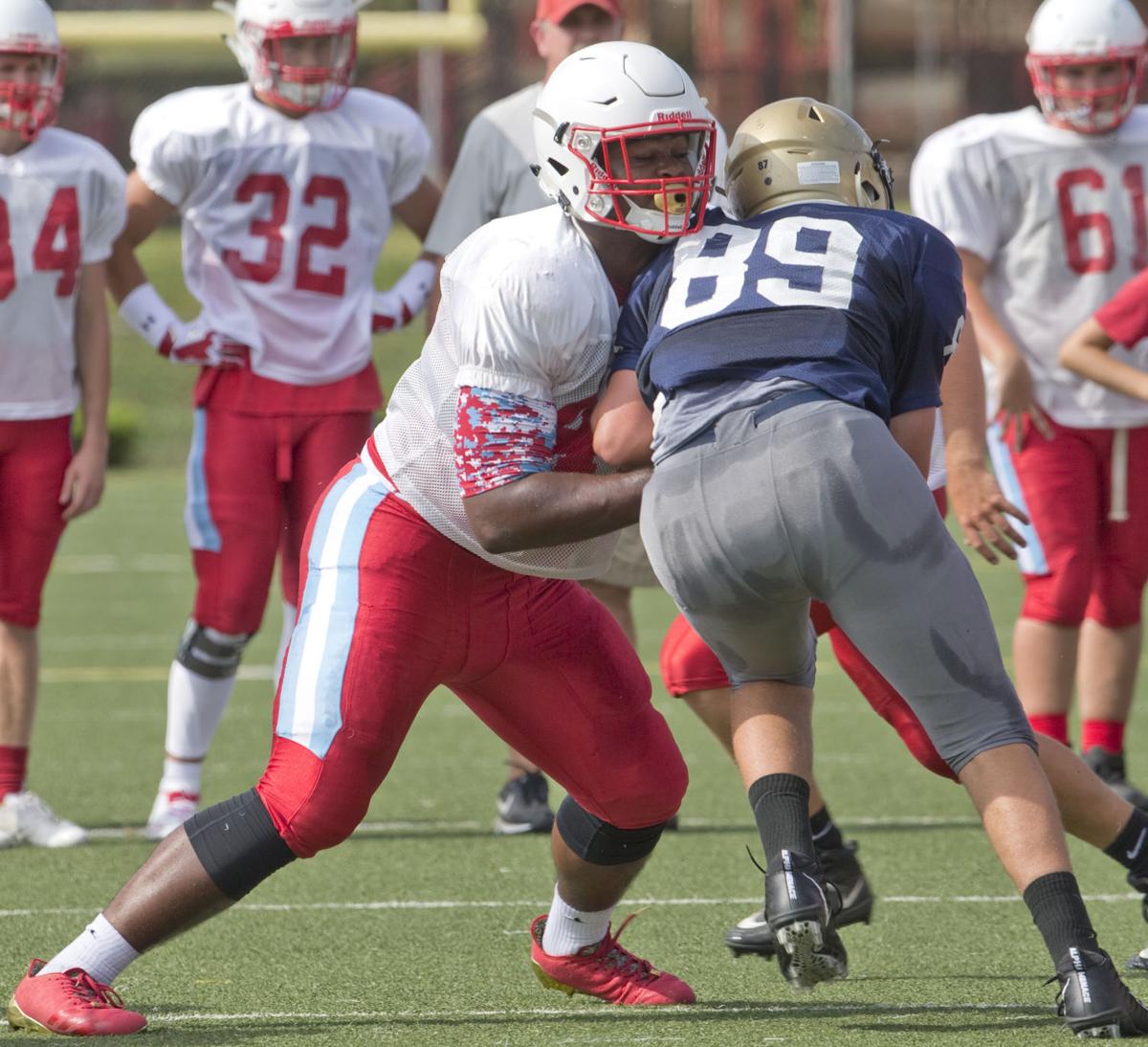 K is for KIP. The colleges have their eyes on Giles sophomore Kip Green, at 6-4, 286 pounds.

Giles lineman Kip Green throws a block during a preseason scrimmage with Hidden Valley at Bogle Field on Friday. Giles has six returning starters on defense led by the 6-foot-4, 284-pound Green.

PEARISBURG — Kip Green is the next big thing.

And maybe in more ways than one at Giles High School, where the 6-foot-4, 264-pound Green started at defensive end in 2016 and was often the largest player on the field, despite being a freshman.

Battling players three years older on the varsity level might intimidate many high school football players, but Green was accustomed to the challenge.

Williams has seen his fair share of athletes in nearly four decades with the Spartans’ program as a player, assistant coach and head coach, but he says Green is one player who stands out.

“We’ve had some big kids over the years, but not one built like him with his size or that had his athletic ability,” Williams said.

Still, there were growing pains last fall and at times Williams said Green lived up to his name, literally.

“Kip Green was really green last year,” Williams joked. “He’s a good kid that’s going to get stronger. He’s going to work hard in the weight room because he understands what he’s got to do to get to the next level.”

Green proved to be valuable, leading the team with nine tackles for loss in the regular season, as the Spartans again made the postseason with a 7-3 record before being knocked out of the Group 2A West Region playoffs by eventual state champion Appomattox County in the second round.

The three regular-season losses came in consecutive weeks to Graham, Glenvar and Galax after a 3-0 start. The Spartans lost to Glenvar 13-10 in overtime while the Maroon Tide won on a last-second field goal.

“All the losses were close ballgames,” Williams said. “We could have been easily 10-0 if it weren’t for about three plays, but that’s football and that’s what’s great about this game.”

To successfully close out those tight games in 2017, Williams wants improvement on defense, where Giles has six returning starters led by Green, who has added 20 pounds up to 284 since last season.

Green’s playing time won’t be limited to the defense. Williams plans to insert Green into the Spartans’ single-wing offense at tight end to give the run-heavy attack a pass-catching option.

“We’ll pick spots to spell him, but at tight end he has really good hands,” Williams said.

“I’m excited for it. I’ve always played both sides of the ball until last year so I’m excited to get back to it,” Green said.

Green also is excited to return to the basketball court. He was a force in the middle of Giles’ lineup last winter before his season came to a premature end after having shoulder surgery in February.

The big sophomore has fully recovered from the surgery and was cleared for football activities earlier this month.

Green’s focus for now is squarely on the football field where he and his teammates kick off their season Aug. 25, when they host 2016 Group 3A state champion Blacksburg in the teams’ traditional season opener. The Spartans have won six times in a row.

Giles travels to Christiansburg in Week 2 to take on the Blue Demons.

In the same way he looked forward to having older competition, Green said he was excited at the challenge of playing the bigger schools at the 4A and 3A level respectively to start the season.

“If we can get through those first two games I think things will be good,” Green said. “It does make me a lot more excited. Blacksburg is a really tough team to beat, but I think we have what it takes.”