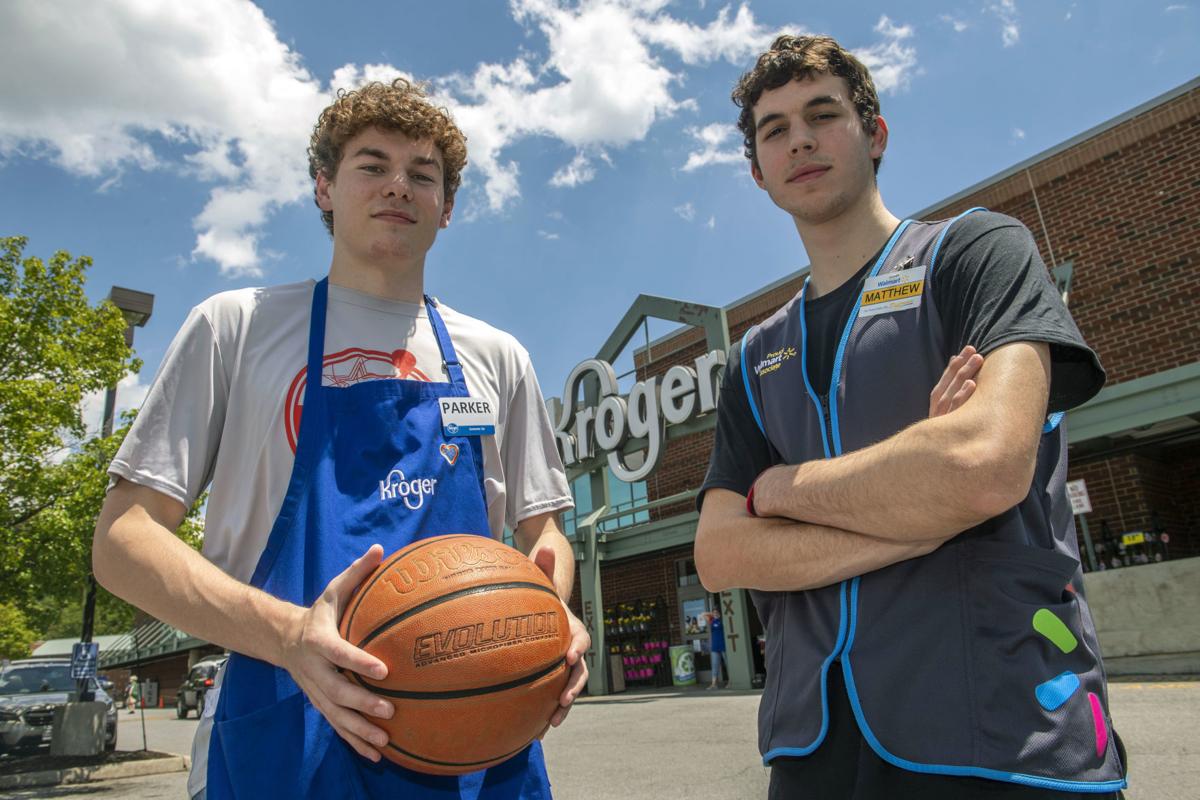 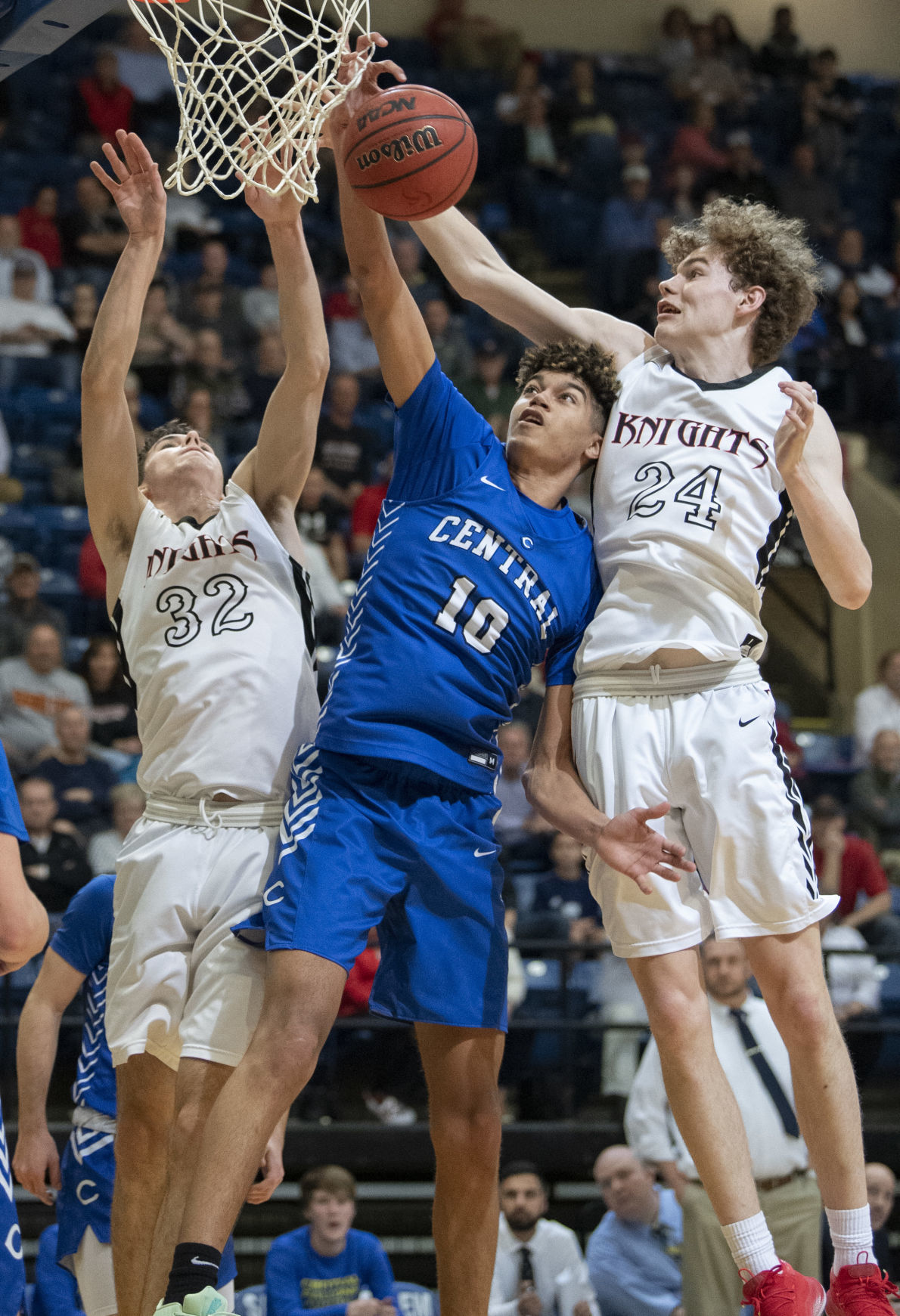 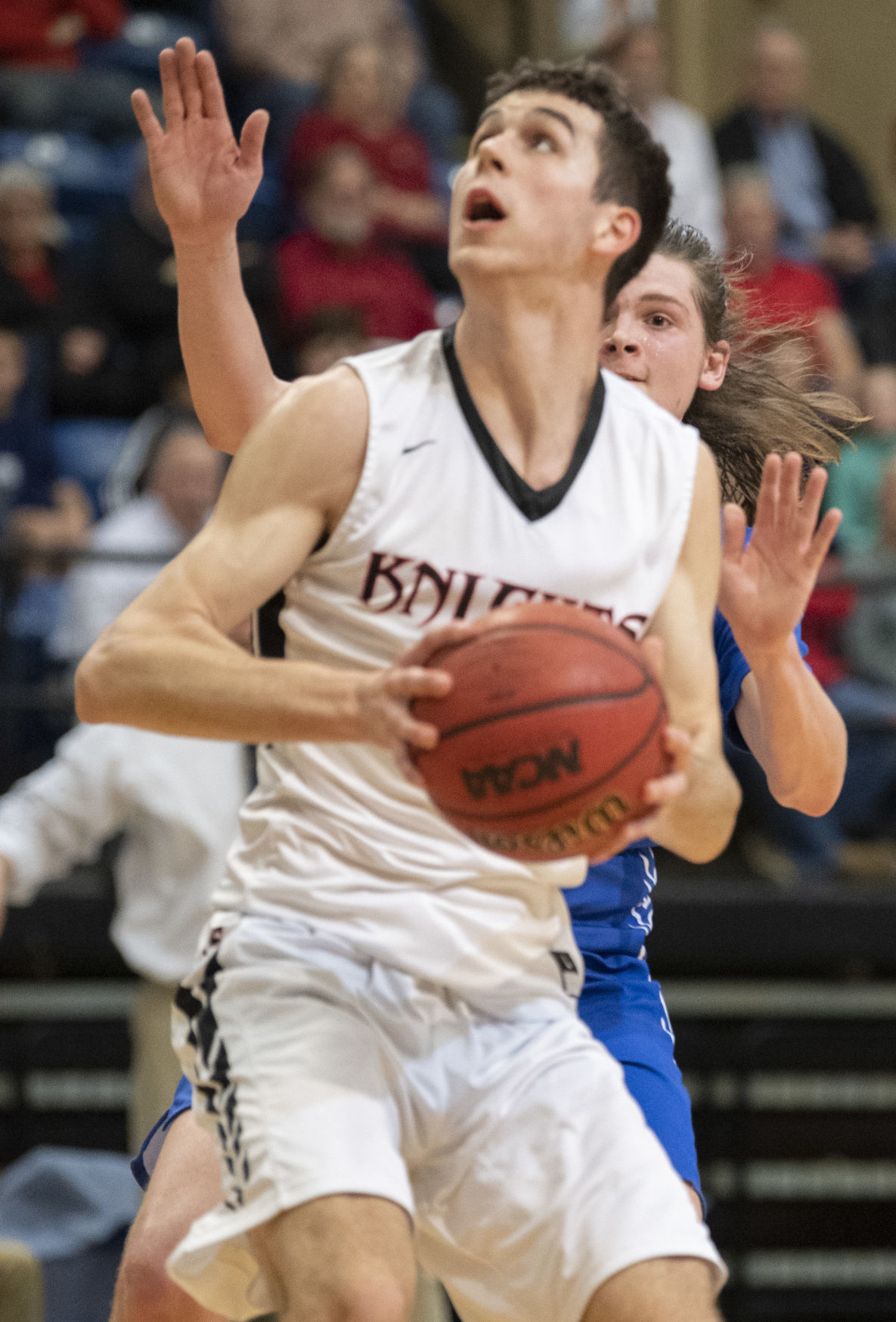 Cave Spring’s Matt Cagle looks to shoot against Central in the VHSL Class 3 semifinals at the Salem Civic Center. The Knights won, advancing to the state final against Lakeland scheduled for March 13. That game was cancelled March 12. 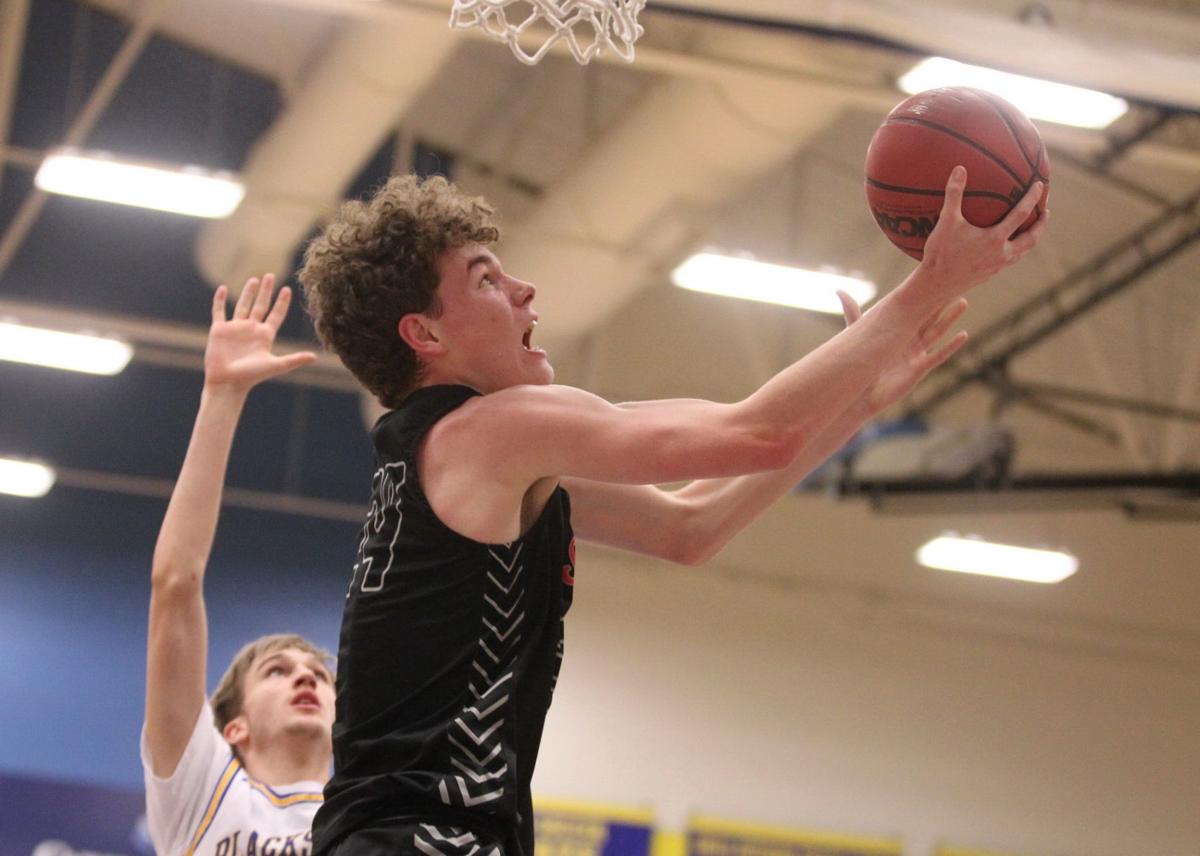 Cave Spring’s Matt Cagle looks to shoot against Central in the VHSL Class 3 semifinals at the Salem Civic Center. The Knights won, advancing to the state final against Lakeland scheduled for March 13. That game was cancelled March 12.

Two months ago they were pulling down rebounds for Cave Spring High School’s boys basketball team.

Today, Parker Huffman and Matt Cagle are grabbing groceries off the top shelf.

The two Cave Spring seniors stood out in the winter of 2019-20, helping the Knights win a VHSL Class 3 co-championship in March.

But with the closure of Virginia’s K-12 schools for the remainder of the academic year on March 23 because of the outbreak of COVID-19, the two have joined a number of Roanoke Valley teens seeking employment.

And at 6-foot-8 and 6-foot-7, respectively, Huffman and Cagle stand above the co-workers at their part-time jobs.

Huffman works 7 a.m.-1 p.m. Monday-Friday at Kroger on Brambleton Avenue, while Cagle clocks in for afternoon and evening shifts at the Clearbrook Walmart.

The two big kids swept the boards in the winter for Cave Spring. Now they clean up in Aisle 6.

Cagle is in high demand at his store.

“All the time another associate or a customer will come up to me and ask me to get something for them,” he said. “I’m a great asset there, being able to reach the top shelf.”

Cagle and Huffman wear protective masks during the workday. The mouth and nose covering hardly serves as a disguise for Huffman, whose size and skill earned him first-team All-Timesland honors after his senior season.

“If the face isn’t recognizable, it’s the height that gives it away,” he said. “There’s no hiding in my job.”

Business is brisk in the grocery aisles where Huffman and Cagle work primarily in the curbside delivery service.

Customers submit on-line orders. Huffman and Cagle are among a handful of associates who find the items on the shelves and assemble them for pickup outside the stores.

Huffman recently filled an order from one person asking for 25 cans of tuna, but that might not have been the strangest request.

“Somebody ordered a giant cactus which I didn’t even know Kroger had,” he said. “I had to hold it with one hand and it tipped over and nearly stabbed me.”

The pain was greater on March 12 when Cave Spring’s basketball team was an hour away from leaving the school for Richmond where the Class 3 championship game against Lakeland was scheduled the following night at Virginia Commonwealth University’s Siegel Center.

Initially, the team was told that the game would be played, but only with parents and immediate family members of players allowed to attend.

As the gear was ready to be loaded on the bus, Cave Spring coach Jacob Gruse assembled the players and informed them that their season was over.

The Knights, who set a school record with 27 victories against just two losses, were declared co-champions with Lakeland.

It was a championship, but the players got no chance to compete for it.

“I don’t know if I’m over it. I’ve kind of just accepted it,” Cagle said. “Those first two weeks, even a month, I’d always get congratulations but it just didn’t have the same ring to it.

“It was always in the back of your head, wondering what that last game would have been like.”

The last thing he expected seven months ago was that he would be wearing a facemask and an apron each weekday morning in May instead of sitting in a history class.

But a funny thing happened outside the classroom. As he witnessed elderly shoppers lining up to buy toilet paper, facial tissues and hamburger meat, Huffman received an education he might never have experienced in school.

“Working at Kroger has just showed me there’s way more than basketball,” he said. “As much as it sucks not to get to play in that last game, everyone on the team quickly realized that’s a small problem compared to the whole world.”

Cave Spring’s boys basketball team ended the season with a 10-game win streak for a number of reasons.

The Knights had five experienced seniors, four of whom started every game. They had size, excellent perimeter shooting, a three-year starter at point guard in Class 3 player of the year Jalen Buster.

They also were accustomed to overcoming obstacles.

Because of ongoing school construction, Cave Spring’s students attended class in rows of temporary trailers set up on campus.

With no gymnasium, the team practiced at Cave Spring Middle School and played most of its home games at nearby Hidden Valley High School.

Another day, another problem to solve.

“It’s unbelievable how mature those kids were, just to be able to go through everything they went through took a special group,” Gruse said.

Cave Spring’s five seniors plan to attend college in the fall and four will continue an athletic career.

Reserve forward Lucas Duncan will be a football walk-on at Virginia Tech, where he plans to study engineering.

Cagle also will enroll at Tech to study data science.

Junior Reed Pendleton led Cave Spring in scoring and made second-team All-Timesland. He recently joined Huffman as a Kroger employee.

Virginia Gov. Ralph Northam declared a state of emergency in the commonwealth on March 12, the day Cave Spring’s basketball team was scheduled to depart from Richmond.

As of Monday, the Virginia Department of Health reported 31,140 confirmed or probable positive COVID-19 cases and 1,014 deaths attributed to the virus.

Interacting with the public has taken on a new meaning for teens about to graduate from high school.

“I’d say three out of four people are wearing a mask,” said Cagle, who worked at Kroger until the basketball season ended before switching to Walmart. “You’re definitely more aware of your surroundings. You try not to get too close to people. You try to keep your mask on at all times. If they’re talking to you, you have to listen a little extra closely.

“I feel safe. Now we have one-way aisles so there’s not two people beside each other. That and hand sanitizer for the employees. They’re handing out masks. They’re checking temperature for all the employees.”

Had the VHSL spring sports season not been canceled in its entirety, Cagle would have participated on Cave Spring’s boys track and field team, where he was a three-time state qualifier in the high jump.

He is staying in shape by running on a nearby track.

Meanwhile, Huffman keeps his basketball skills sharp by shooting on a basket at his neighbors’ home in Roanoke County.

Before he reports for school at CNU, Huffman hopes the 2019-20 Cave Spring team can assemble for a proper sendoff.

“We’re going to try and get a banquet in,” he said. “We still want to have that sendoff that the seniors and the team always get.”

What’s on the menu?

Odds are, Cave Spring’s grocery boys can find the ingredients to make it a winner.