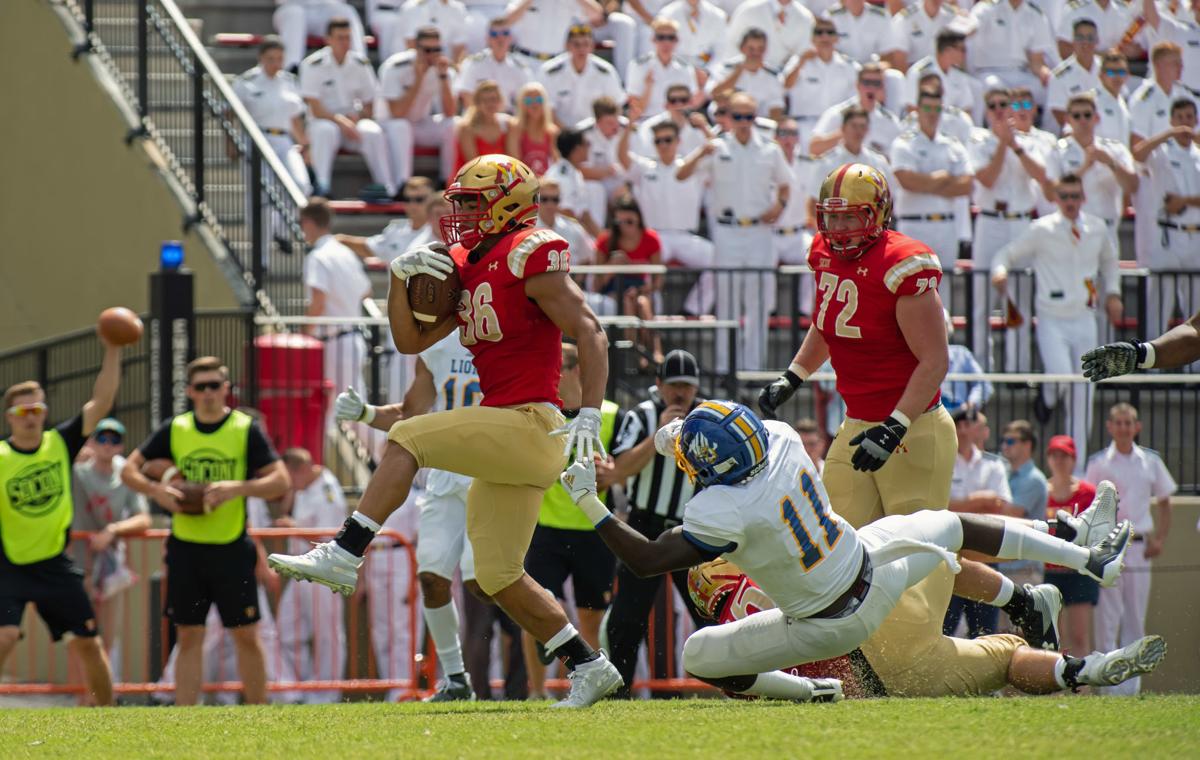 Salem graduate Alex Ramsey (left) of VMI high-steps into the end zone Saturday. He ran for 88 yards and two touchdowns on 15 carries. 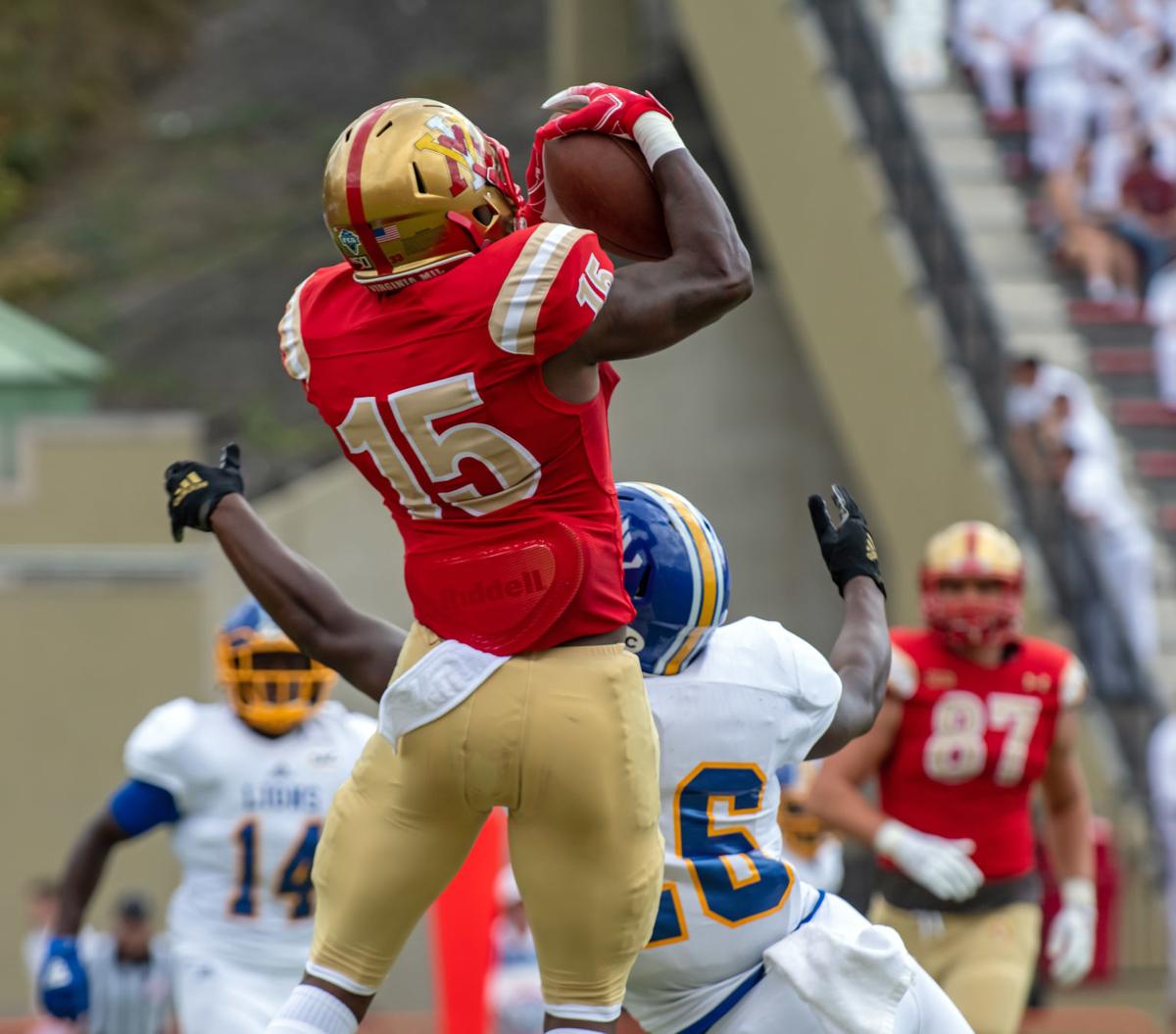 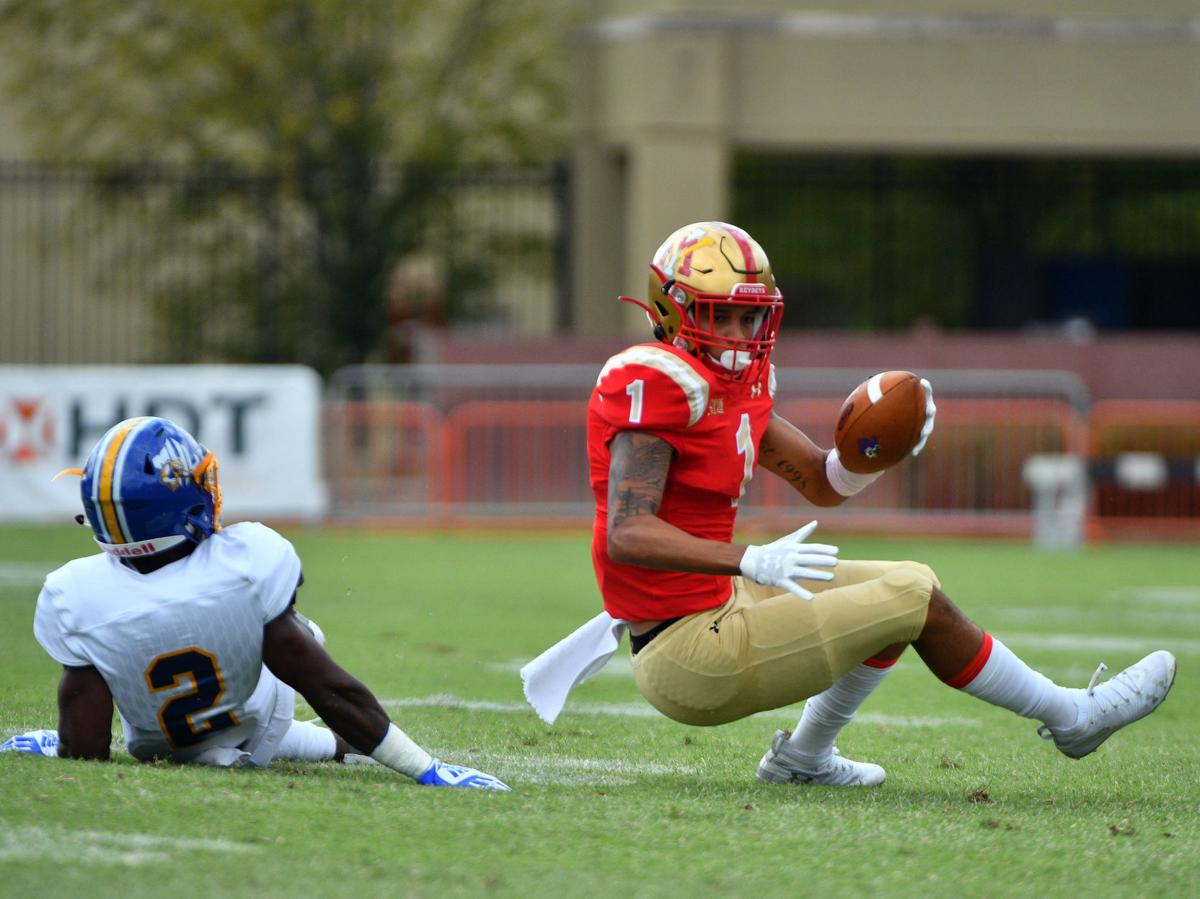 Salem graduate Alex Ramsey (left) of VMI high-steps into the end zone Saturday. He ran for 88 yards and two touchdowns on 15 carries.

LEXINGTON — It is only September, and the VMI football team has already matched last year’s win total.

The Keydets are hungry for more.

“We plan on winning a lot more games than one,” VMI coach Scott Wachenheim said.

“What I felt today was something that I’ve never felt in my time here at VMI,” said junior quarterback Reece Udinski, who threw four touchdown passes Saturday. “To have that feeling, it’s like, ‘I want it again next week.’

“I’ve only had two wins here at VMI and today was one of them. But last year [in the 20-11 win over Tusculum] we felt like we kind of left some points on the board. But today, I think we played an all-around good game.”

VMI’s 63 points were the most the Keydets have scored since putting up 69 on Division II member Chowan in 2008.

Two years ago, VMI did not win a game. Last year, VMI did not pick up its lone win of the season until November.

But the Keydets (1-1) got some validation in Week 2 this season.

“It’s huge for the confidence level of the team,” Wachenheim said. “You could just see confidence building on the sideline.”

But will VMI be able to beat a Division I team this season?

The Keydets will visit East Tennessee State, which earned a share of the Southern Conference title last season, next weekend. VMI has lost 27 straight games to Division I foes, including 22 straight SoCon games.

“You see that we’re a lot different team this year, and we’re going to prove that in the SoCon,” said Ramsey, who ran for 88 yards and two touchdowns on 15 carries Saturday.

“We had close games last year that we didn’t finish. … We’re a lot better team this year. We proved it today. This team that we played today isn’t that much better than who was it, Tusculum? We’re just a lot better team. You’ll see that against ETSU.”

Mars Hill (0-1) is steered by former VMI and Ferrum assistant Tim Clifton, who is in his 25th season at the helm of the Mountain Lions.

VMI jumped to a 21-0 lead late in the first quarter and led the rest of the way.

The Keydets picked off four passes. Three of the interceptions paved the way for VMI touchdowns.

“We’ve given those kids the freedom to make plays,” Wachenheim said of his secondary. “If you get beat, you get beat.”

Kaleb Tucker and A.J. Smith each recorded two interceptions for the Keydets, with both of Tucker’s interceptions coming in the first quarter.

“That felt like a jump start to my season,” Tucker said.

VMI, which fell to FBS member Marshall last weekend, piled up 571 yards of total offense Saturday — its best output since a 2014 game.

Udinski completed 17 of 29 passes for 264 yards. After helping VMI build a 43-14 lead early in the third quarter, Udinski took the rest of the game off.

“We got to play a lot of players,” Wachenheim said.

The Keydets, who had a poor running game last year, rushed for 220 yards Saturday — their highest total since a 2016 game.

“I’ve seen big improvement by the offensive line,” Wachenheim said. “I joke when we got here [before the 2015 season] we had the Winnie the Pooh O-line — short, fat and proud of that. Now they’re all taller than me.”

Patrick Henry graduate Leroy Thomas, a true freshman, caught the first TD pass of his VMI career. His 7-yard reception extended the lead to 21-0 with 3:32 left in the first quarter.

Mars Hill cut the lead to 21-14 early in the second quarter, but Udinski threw a 36-yard TD pass to Jakob Herres to extend the lead to 28-14 with 8:01 left before halftime.