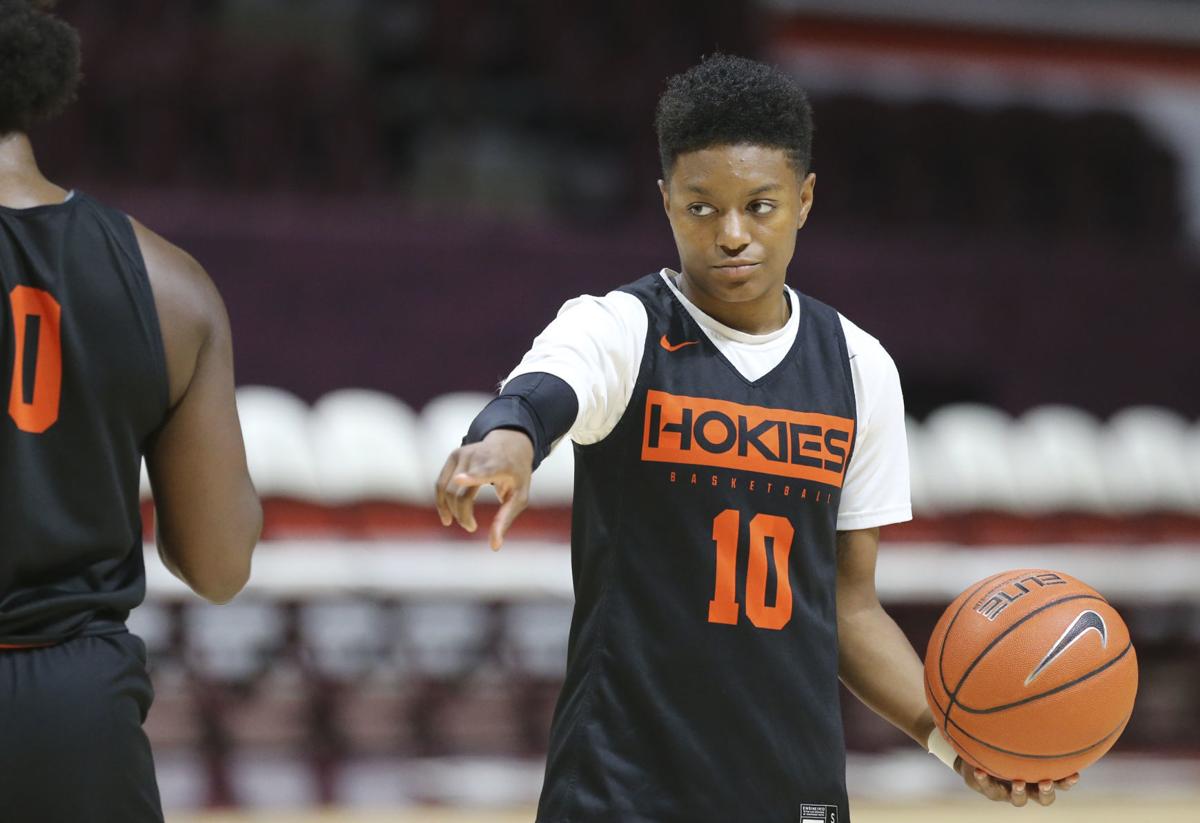 Former Georgia point guard Taja Cole has joined the Virginia Tech women’s basketball team as a graduate transfer. Cole, who led the Southeastern Conference in assists last year, will start for the Hokies. 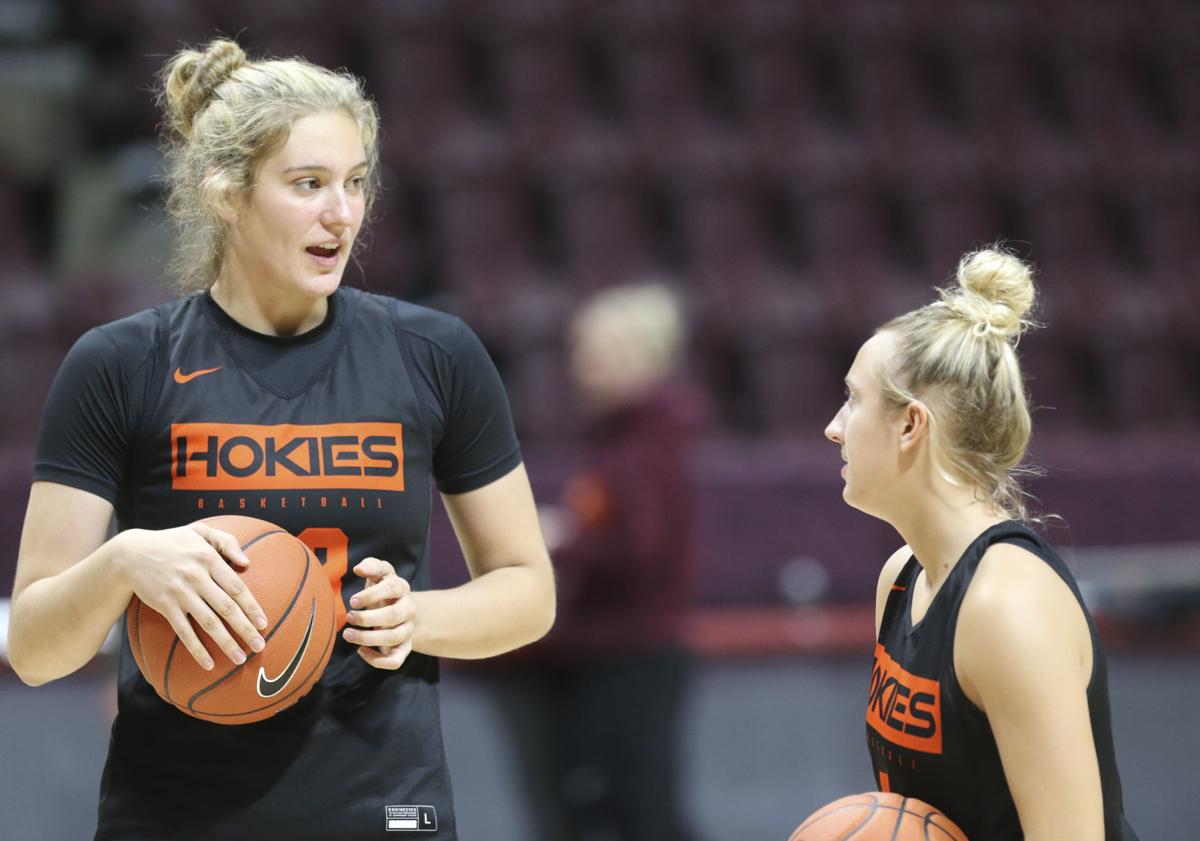 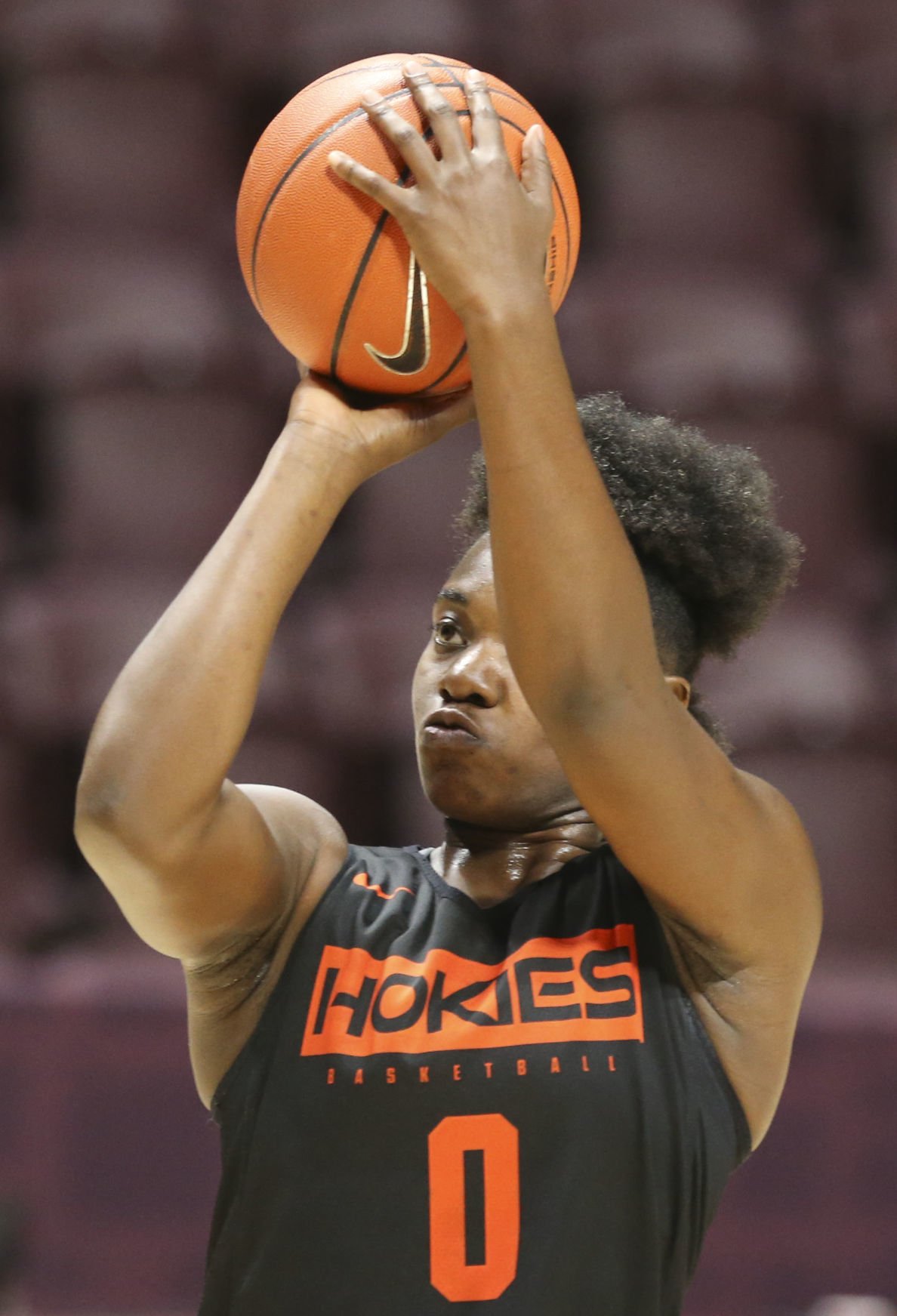 Trinity Baptiste will again start at forward for the Virginia Tech women's basketball team this season. She will play more on the perimeter than she did last year. 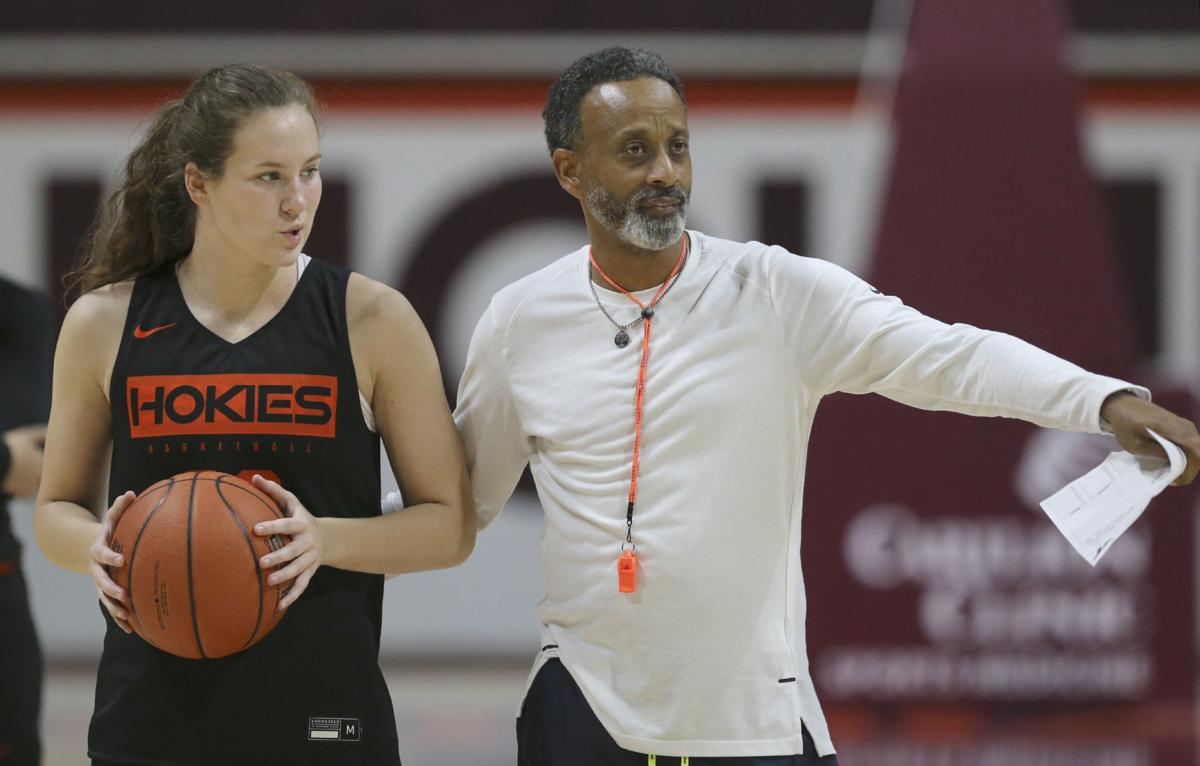 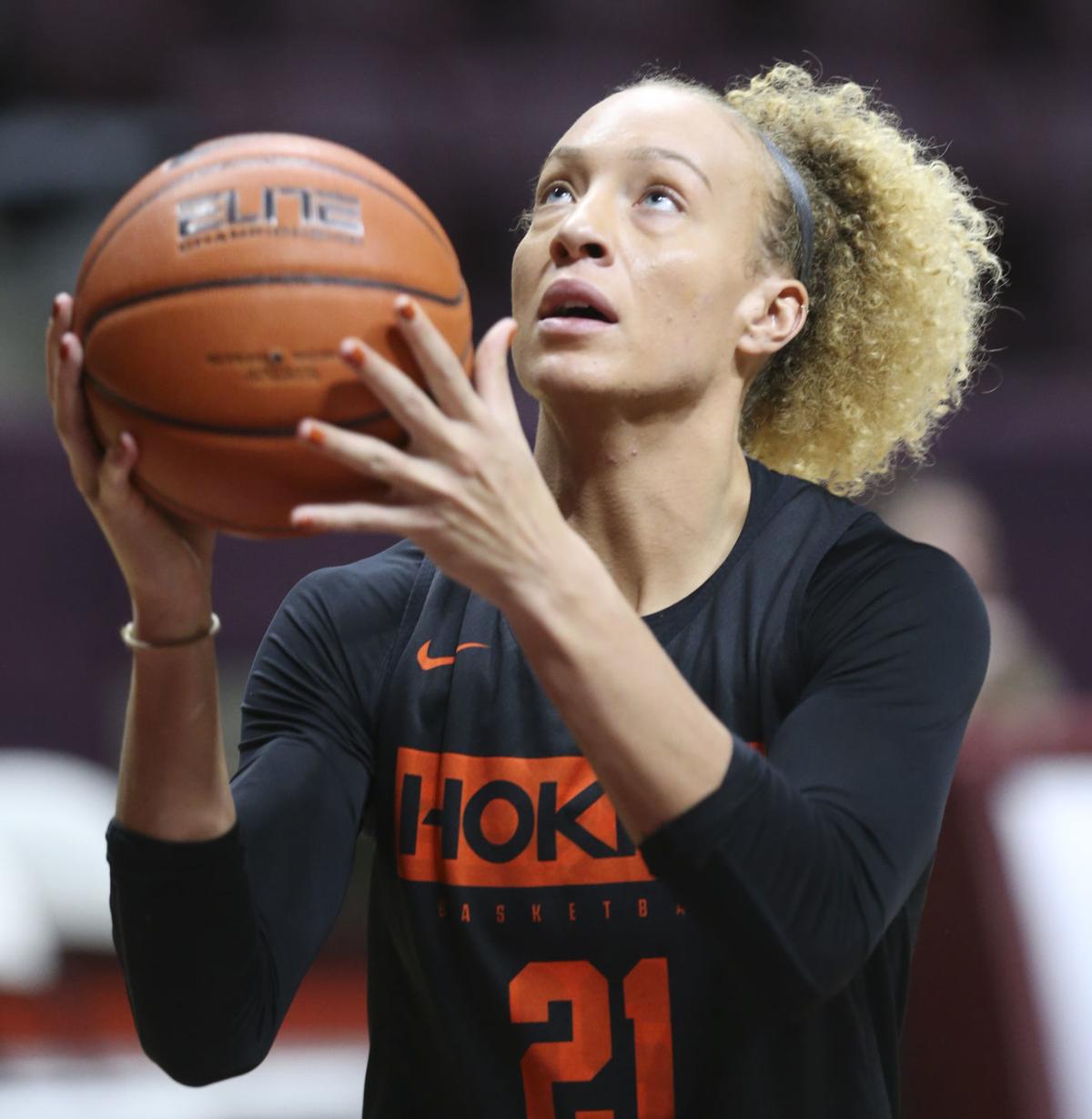 Lydia Rivers, formerly a Radford University standout, has joined the Virginia Tech women's basketball team as a graduate transfer. Her father played football and basketball for the Hokies. 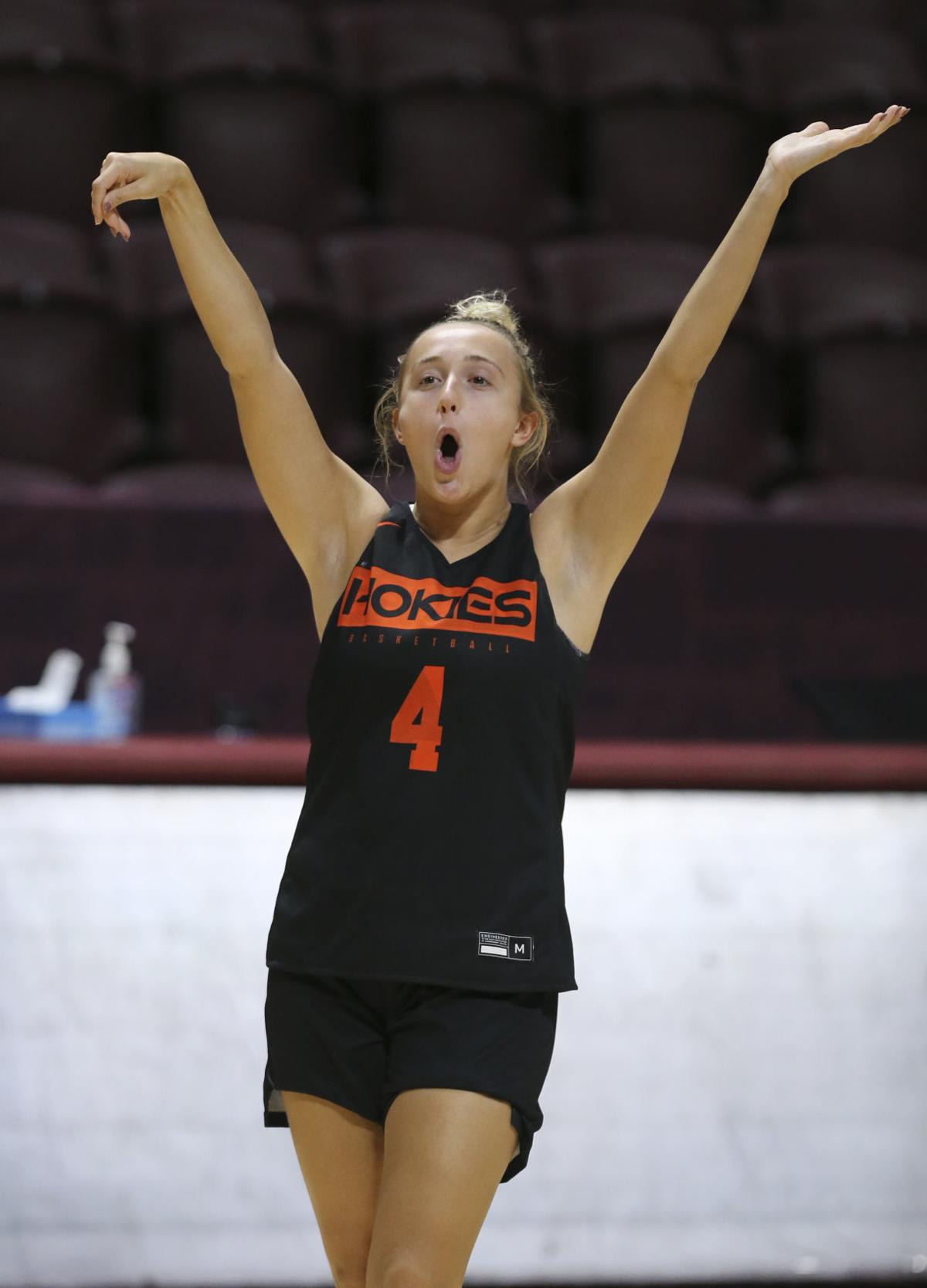 Dara Mabrey celebrates making a 3-pointer during a recent practice. Mabrey started at point guard for Virginia Tech last season but will also be used at off-guard this season.

Former Georgia point guard Taja Cole has joined the Virginia Tech women’s basketball team as a graduate transfer. Cole, who led the Southeastern Conference in assists last year, will start for the Hokies.

Trinity Baptiste will again start at forward for the Virginia Tech women's basketball team this season. She will play more on the perimeter than she did last year.

Lydia Rivers, formerly a Radford University standout, has joined the Virginia Tech women's basketball team as a graduate transfer. Her father played football and basketball for the Hokies.

Dara Mabrey celebrates making a 3-pointer during a recent practice. Mabrey started at point guard for Virginia Tech last season but will also be used at off-guard this season.

The Virginia Tech women’s basketball team must replace not one but two standouts.

So the Hokies hope some newcomers can help fill the void. Two graduate transfers and four freshmen have come aboard.

Georgia graduate transfer Taja Cole and freshman center Elizabeth Kitley will be among the starters when the Hokies open the season Tuesday against visiting St. Francis (Pennsylvania).

The Hokies, who had to settle for the WNIT last season, no longer boast All-ACC second-team picks Regan Magarity and Taylor Emery.

Emery ranked third in the ACC in scoring (19 ppg) as a senior, while Magarity averaged 14.1 points and a league-best 12.8 rebounds as a senior. Magarity, the ACC’s career rebounding leader, is now playing professionally in Turkey.

“When you lose two kids of their magnitude, you don’t try to go out there and replace each of them with one person. I think it’s going to be a collective effort,” coach Kenny Brooks said. “These kids are ready for the challenge because they … understand that people are really going to focus on what we lost, while we really want to focus on what we have.”

Virginia Tech has been picked 10th in the ACC’s preseason poll of coaches, media members and sports information directors. ACC teams will play 18 league games this season, up from 16 last year.

Cole gives the Hokies an experienced point guard. She averaged 11.1 points at Georgia last season, when she ranked fifth nationally with an average of 7.0 assists.

“My speed can really help us out with pushing the ball and me getting in the lane and hitting our shooters,” Cole said. “My strength is definitely getting my teammates the ball and making everybody around me look good.”

Cole was a standout at Lloyd C. Bird High School in Richmond. Tech is her third college stop; she began her career at Louisville.

“I’m really excited to be back here in Virginia,” she said. “My family’s excited.”

She said she did not leave Georgia for basketball reasons.

“I wanted to find somewhere I can get my master’s in a [graduate] program that I really enjoyed,” she said.

Cole, who is taking graduate courses in leadership, picked Tech over Kansas State. She liked the fact that she can get a Tech master’s degree in just one year, and that she can also take fashion design courses at Tech.

“She brings a swagger,” Brooks said.

The 6-foot-5 Kitley, who shined at Northwest Guilford High School in North Carolina, will start at center. She was rated the No. 33 high school senior in the nation by ESPN.

“In high school, people were normally a lot shorter. But now there’s bigger people,” Kitley said. “That will just let me use the moves that I’ve learned. In practice [at Tech], we have people that are tall we play against — boys — to prepare.”

With Kitley’s arrival, don’t expect the Hokies to shoot as many 3-pointers as they did last season.

“We’re going to throw the ball inside a lot more than we have in the past,” Brooks said.

Mabrey will join Cole in the starting backcourt. Mabrey started at point guard as a freshman last season, when she averaged 11.2 points and led Tech in 3-pointers (80) and assists (92).

Mabrey will still see some action at point guard, but the addition of Cole will enable Mabrey to also play on the wing.

With Emery and Magarity having graduated, look for Mabrey’s scoring average to rise.

“I’m not so much focused or conscious of, ‘I have to take more shots,’ or ‘I need more opportunities,’ because … I know I’m going to have them,” Mabrey said.

Trinity Baptiste (10.4 ppg, 7.6 rpg) is a returning starter at forward. With Kitley in the paint, Baptiste will play more on the perimeter than she did last year.

Kendyl Brooks, who started last year, will miss this season because of hip surgery.

The bench includes graduate transfer Lydia Rivers, who made the All-Big South first team at Radford last season. She averaged 12.2 points and 10.4 rebounds.

“Night in, night out, she’s going to be playing against higher level, more physical players [in the ACC],” Brooks said.

Rivers said she left Radford because the school did not offer a master’s program she liked. She will be taking graduate courses in leadership.

Rivers, whose father, John, played basketball and football for the Hokies, picked Tech over Purdue.

In addition to Kitley, the other freshmen are Cayla King, who was one of Kitley’s high school teammates; Makayla Ennis; and Taylor Geiman, who will miss the first three weeks of the season because of a shin injury.

The bench also includes Chloe Brooks, a redshirt freshman; and 6-4 center Alex Obouh Fegue, who transferred from a junior college after the fall 2018 semester and redshirted the rest of last season.

The Hokies have not reached the NCAA Tournament since 2006. They made the WNIT the past four years — first under ex-coach Dennis Wolff, then under Brooks the past three seasons.

Brooks said he is excited about his fourth season at Tech.

“It’s Year 4 and you have all the kids in here that you recruited and you feel like you can start building a foundation,” Brooks said. “It takes time to build that culture.