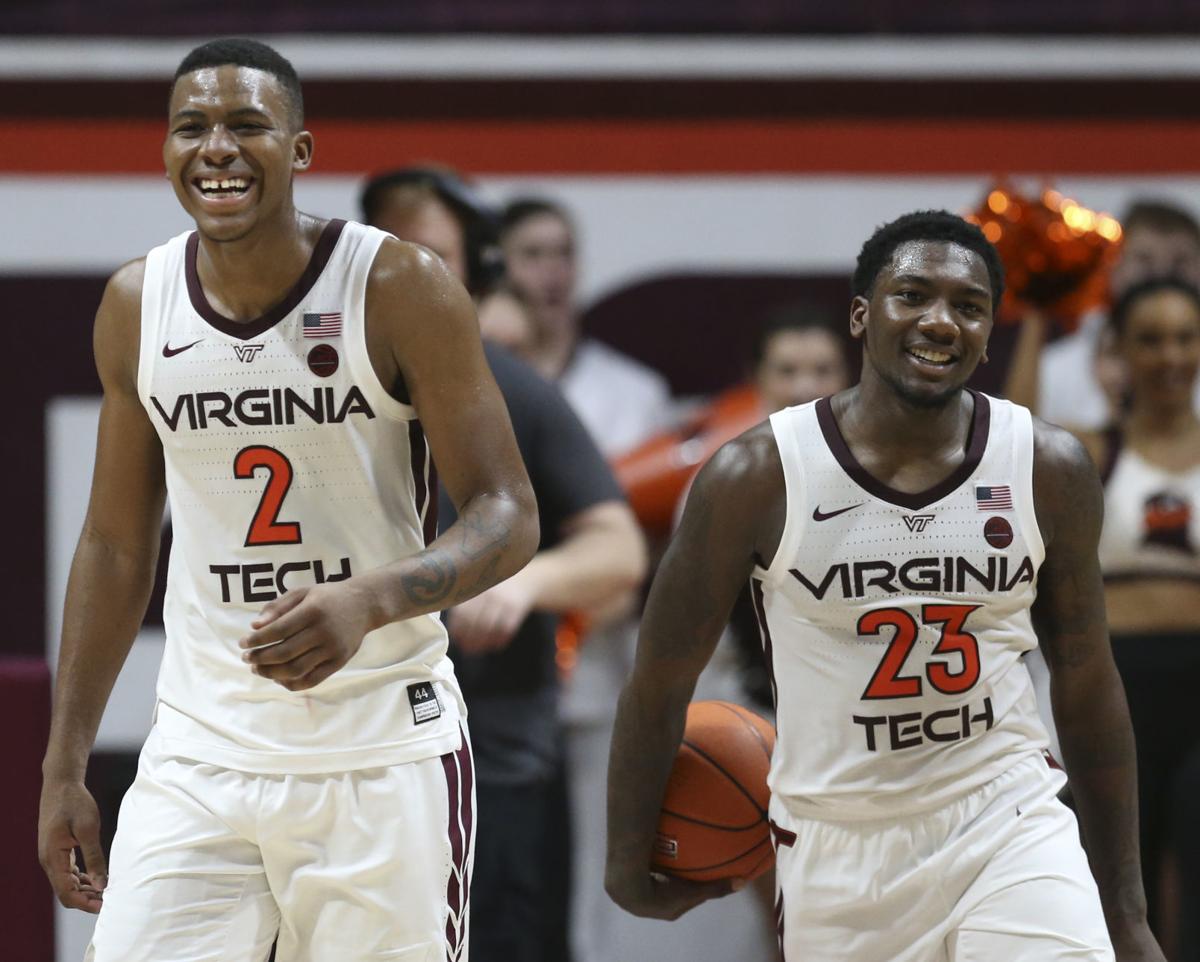 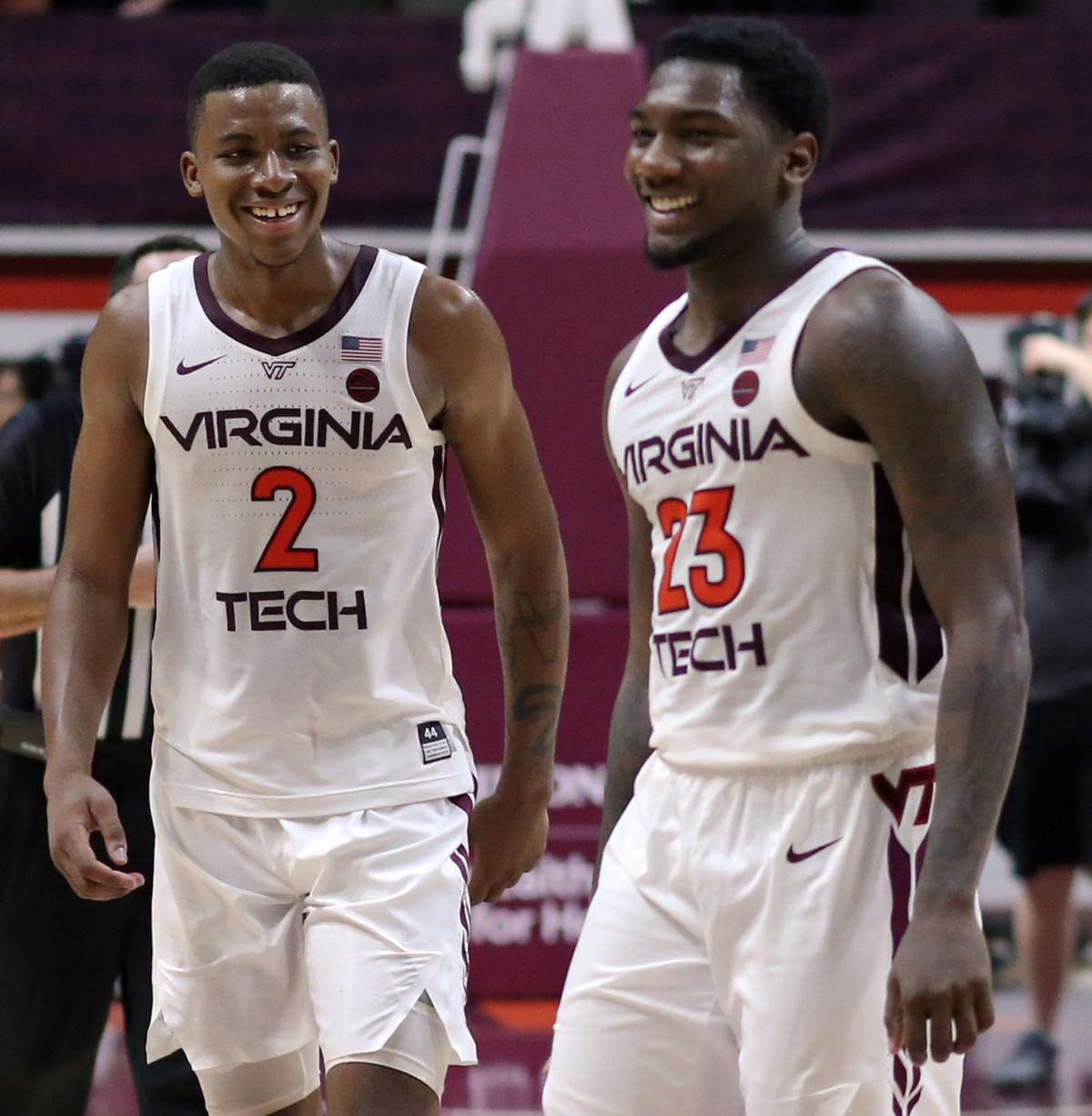 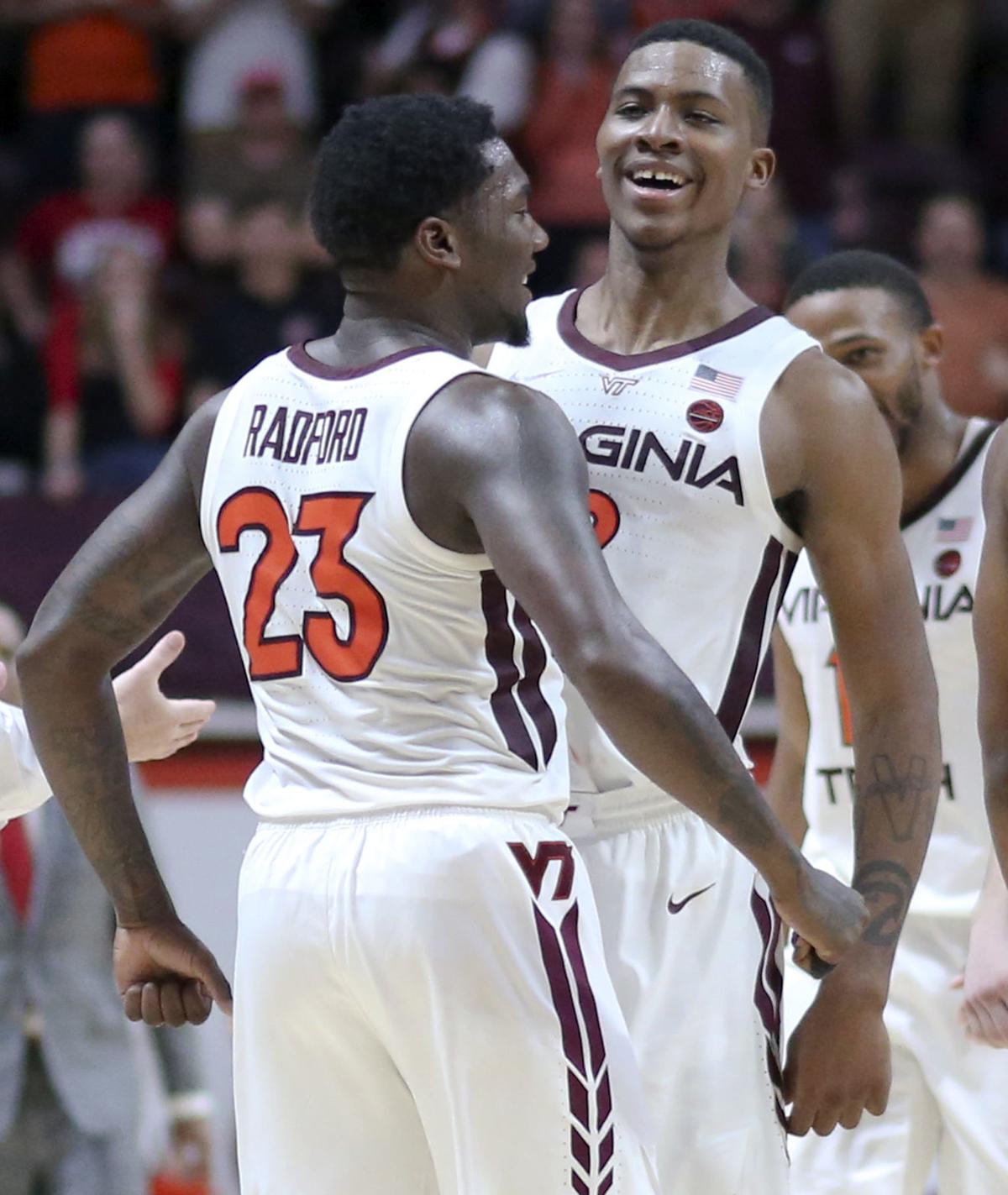 Virginia Tech redshirt freshmen Tyrece Radford (left) and Landers Nolley II (right) are big reasons why the Hokies are 14-3 overall and 4-3 in ACC. Nolley leads the team in scoring and Radford leads the team in rebounding. 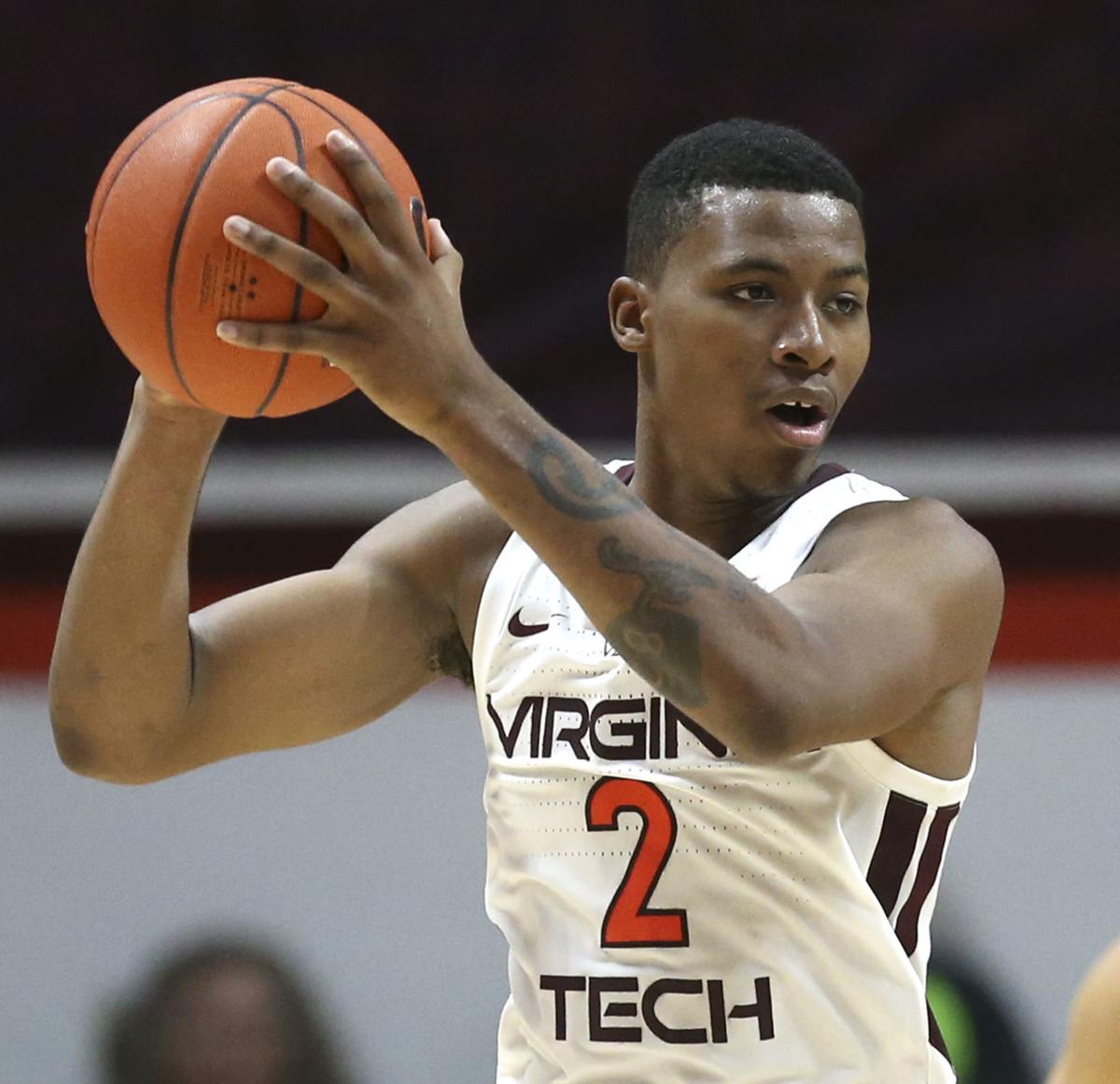 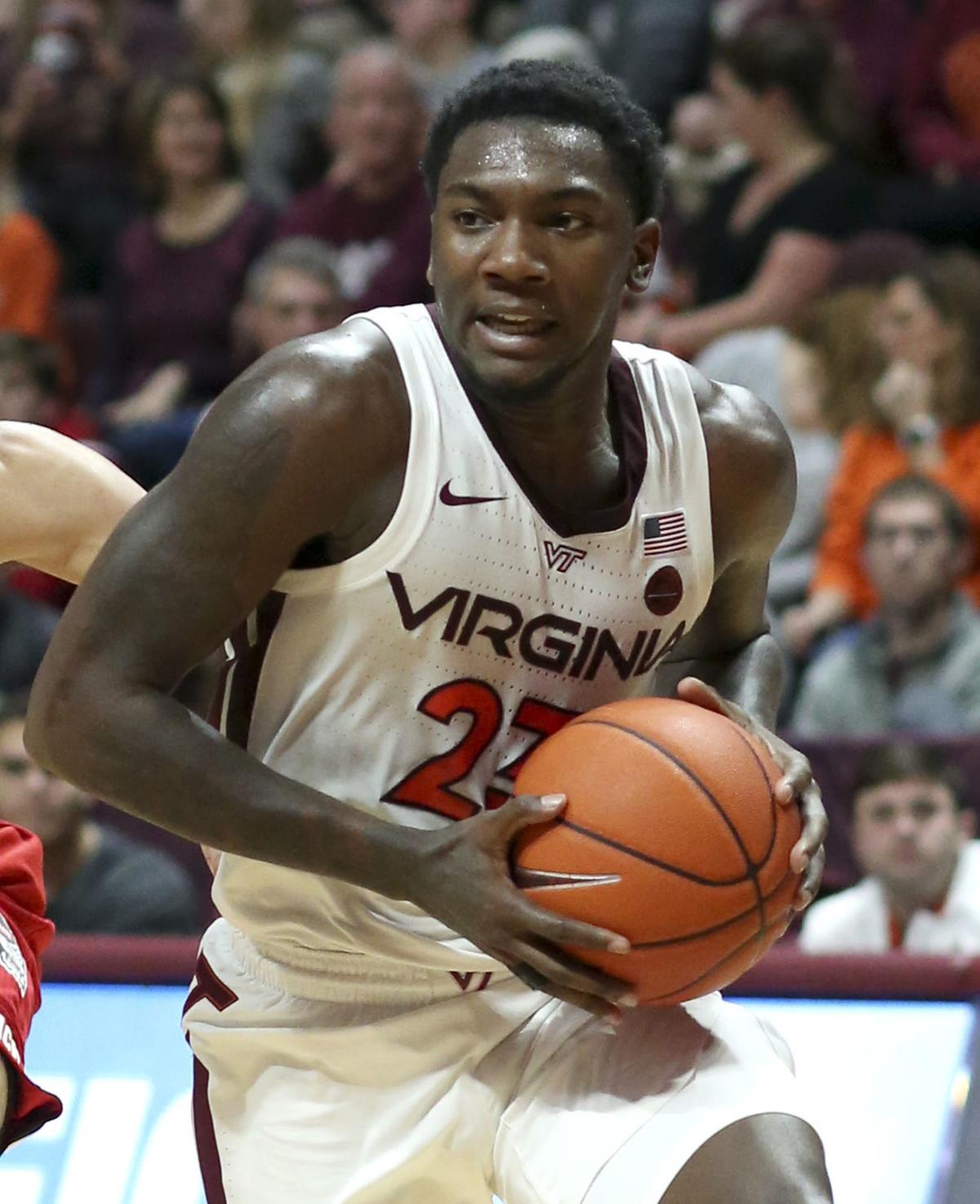 Virginia Tech’s Tyrece Radford usually gets his points by driving to the basket. He averages 8.8 points but has scored at least 18 points in two of the past three games. 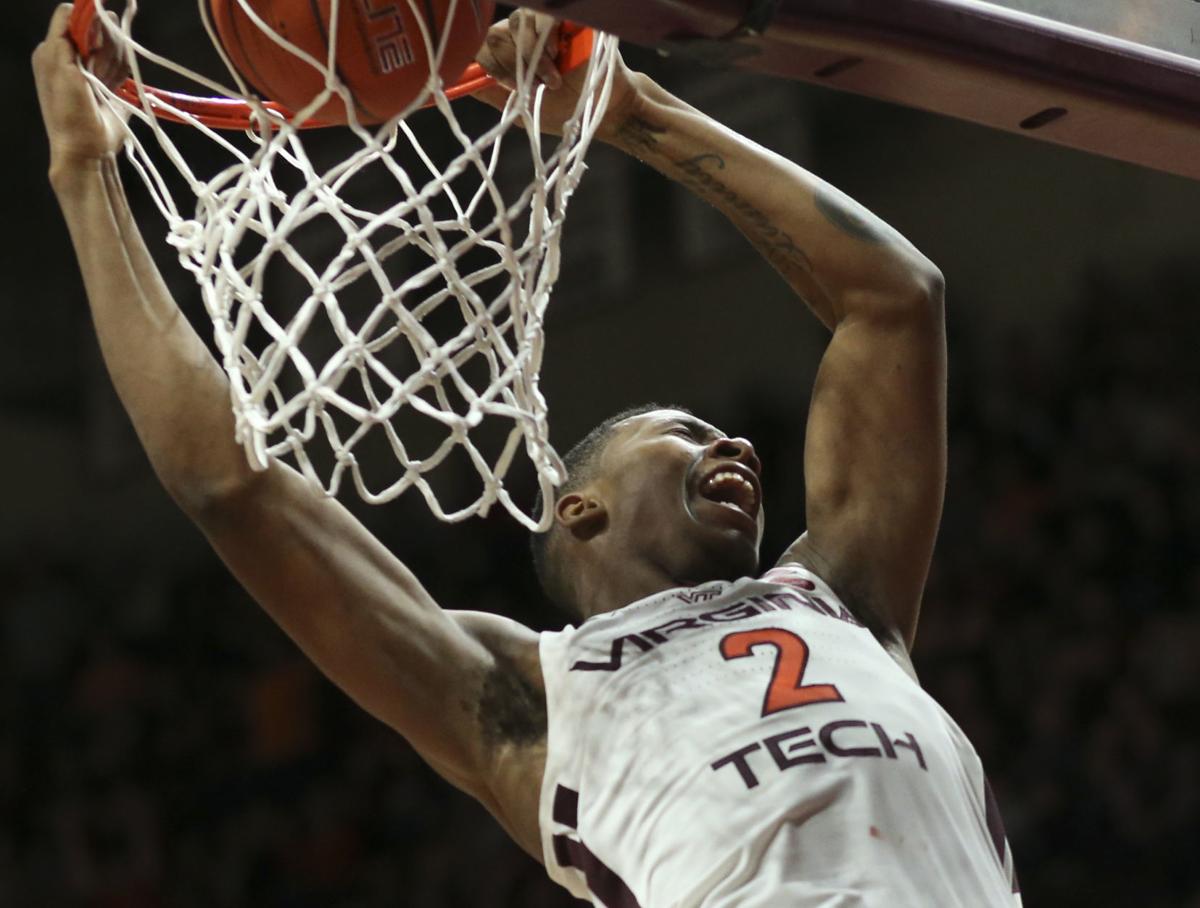 Virginia Tech’s Landers Nolley II ranks third in the ACC in scoring with an average of 17.8 points. He is a five-time ACC freshman of the week. 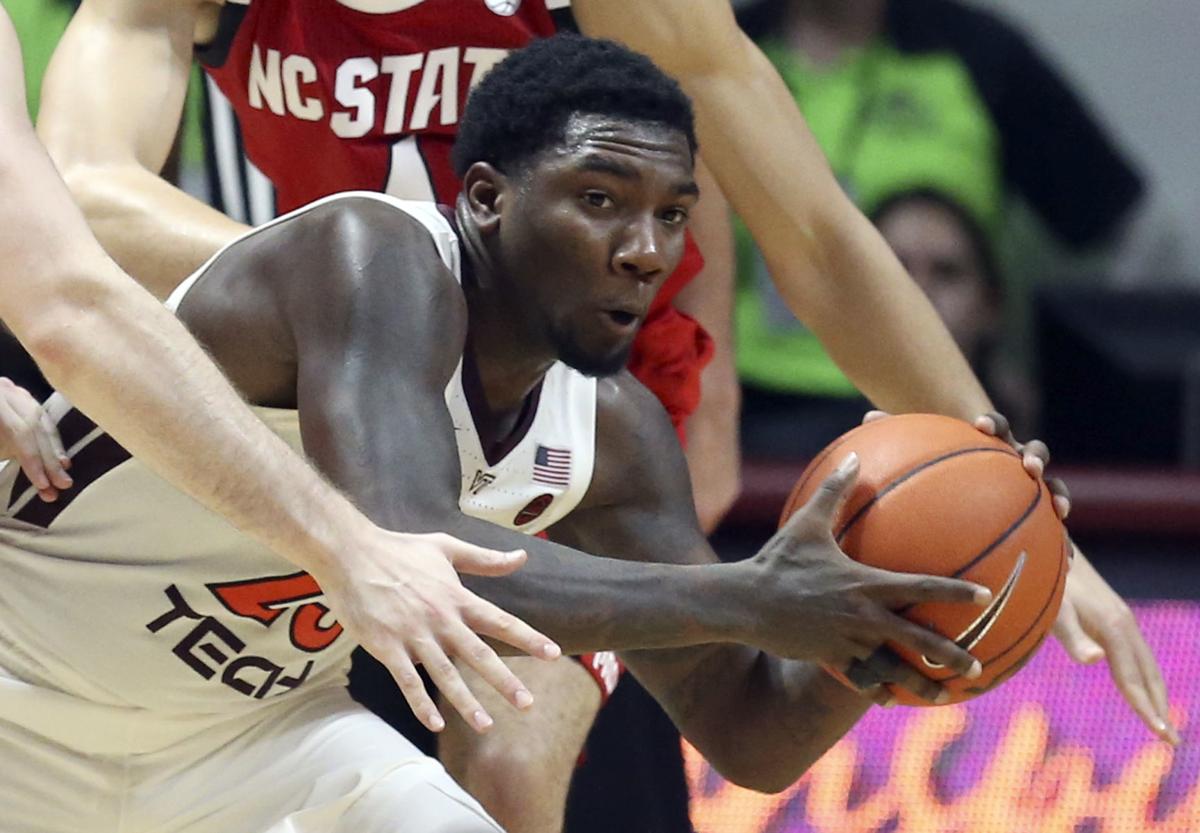 Virginia Tech redshirt freshmen Tyrece Radford (left) and Landers Nolley II (right) are big reasons why the Hokies are 14-3 overall and 4-3 in ACC. Nolley leads the team in scoring and Radford leads the team in rebounding.

Virginia Tech’s Tyrece Radford usually gets his points by driving to the basket. He averages 8.8 points but has scored at least 18 points in two of the past three games.

Virginia Tech’s Landers Nolley II ranks third in the ACC in scoring with an average of 17.8 points. He is a five-time ACC freshman of the week.

This season, they are having their fun on it.

The redshirt freshmen are big reasons why the Virginia Tech men’s basketball team is enjoying a surprisingly good season.

Nolley ranks third in the ACC in scoring with an average of 17.8 points. Radford averages a team-high 6.4 rebounds, despite being a 6-foot-1 guard.

Both had to redshirt last season for academic reasons.

“It sucked,” Radford said with a laugh as he sat next to Nolley in a joint interview last week. “It was tough.”

“Especially when we lost,” Nolley said.

During Tech’s memorable 2018-19 season, the two looked ahead to this season.

“We just knew we [were] going to have a major impact,” Nolley said. “We used to talk about that all the time — [during] workouts, watching the games.”

“When we went to our dorm, we [were] like, ‘We have to pick up where they left off,’” Radford said.

They were roommates that school year, but not this year.

“Double trouble,” Nolley said with a grin. “We were just having too much fun.

“I guess they wanted us focused this year.”

Their focus has paid off. Despite losing the top five scorers from last year’s Sweet 16 squad, the Hokies are 13-5 overall and 4-3 in the ACC entering Wednesday’s game against North Carolina.

“We just wanted everybody to know we could produce,” Nolley said. “We didn’t want everybody to think it was going to be a rebuilding year, so we just came in and tried to keep up the momentum.”

Nolley — actually, Landers Sanchez Nolley II — is the son of a former LSU basketball player. The elder Nolley averaged 10.7 points for LSU in the 1994-95 season. He shot 42% from 3-point range that year, which currently ranks eighth on the LSU single-season list.

Although Nolley’s parents call him by his first name when they get mad at him, he is usually called “Sanchez” or “Chez.”

As a kid growing up in Georgia, he used to play basketball with his mother and older sister. He did not start playing with his father until the eighth grade, when he began getting serious about the sport.

After Nolley came off the bench in the ninth grade, father and son moved to Chicago so Nolley could have more playing time. He helped his new team win a state title, but he did not start as a sophomore, either. They moved back to Georgia, and Nolley joined a new team.

As a junior and senior, Nolley not only started but led Langston Hughes High School to two state crowns. After decommitting from the University of Georgia, he verbally committed to then-Hokies coach Buzz Williams in the fall of his senior year. He was named the state player of the year as a senior.

Because of an ACT issue, the NCAA did not clear him to play last season. But he was able to shine at Tech in another way. He made the ACC’s academic honor roll for the 2018-19 school year.

“I’m proud he’s doing well as a ballplayer, but I’m proud of the young man that he is,” his father said.

“Like any typical ’hood, a lot of negative energy,” the off-guard said. “But the culture down there is crazy — the food, the parties, the dancing.

“It was a lot of fun, but it was a place, if you’re trying to do something with your life, you have to move [from] … because it’s full of distractions.”

He said the colleges that showed interest in him at the beginning of his senior year of high school backed off because of his “grade situation.”

But in June of his senior year, Tech offered him a scholarship.

Radford said he had to sit out last season because of his GPA. But he was still a part of the Hokies.

“Plenty of times growing up where I grew up at, you think about giving up on your dream,” Radford said. “I’m just thankful God was next to me, talking to me through the whole way not to give up.”

Nolley and Radford had never met until the summer of 2018, when Radford arrived at Tech after taking a long bus ride from Louisiana.

“We clicked,” Radford said. “We found out we both would be redshirting, and the work ethic went up from there.

Nolley entered the transfer portal on April 8, 2019, the day after Tech named Mike Young its new coach. The following week, the 6-7 forward decided to stay at Tech.

It took one workout for Young to be dazzled by him.

“His size, his ability to make shots — he’s a basketball player, he knows exactly how the [play] … is supposed to play out,” Young said this week. “It doesn’t take you very long to recognize what a good player he is.

“[He] sees the thing happen a pass ahead. … The nuances of the game that may be foreign for most young people, he’s got an advanced understanding of it.”

Nolley scored 30 points in the season-opening win at Clemson — the first of seven games in which he eclipsed 20 points.

“Just because I had to sit out a year, it’s still basketball,” Nolley said.

Nolley ranks second on the Hokies in rebounds and assists.

But the shorter Radford is the team’s top rebounder.

“Do whatever it takes to win,” Radford said.

What makes Radford a good rebounder?

“I can repeatedly jump like that,” he said as he snapped his fingers.

Radford was also able to spend a lot of time in the weight room last year. He said he was “a twig” when he enrolled at Tech.

“His game wasn’t ready for that [ACC] level then,” Radford’s father said. “He wasn’t really that strong.”

Radford averages 8.8 points. But he and Nolley each scored 21 points in last week’s win at Wake Forest.

“It’s always good to see guys you sat out with and went through the same struggle with, come back and be productive,” Nolley said.

While Nolley ranks third in the ACC in 3-pointers, Radford gets his points by driving to the basket.

“I always have been the underdog everywhere I go — [lacking] size, not very confident shooting the ball,” Radford said.

Young said it took him a long time to realize Radford’s value.

“[With] his grit and toughness and determination, junkyard-dog mentality, he can help a lot of people win — and he’s certainly done that for us,” Young said. “It may take you a bit — it did me — to really appreciate everything he does for your team. And a lot of those things don’t show up on the stat sheet. But … he affects winning every time he’s on the floor.”

Sitting out last season had its advantages for Nolley and Radford.

“Everything happened for a reason,” Nolley said. “We grew, gained a lot of weight, gained a lot of muscle, knowledge. … On the bench taking notes, stealing tricks out of other people’s games.”

Nolley has been named the ACC freshman of the week five times.

But unlike some other freshmen, Nolley was not included last week in ESPN’s latest mock two-round 2020 NBA Draft.

“Landers is a pro. At the rate he’s going, he won’t be back next year,” Nolley’s father said.

Nolley said he won’t think about the draft until after the season.

“If I thought about that, then I wouldn’t be thinking about the season — how we’re doing, proving people wrong,” he said.

There is more that Nolley and Radford want to accomplish this season.

“A lot of things that I still got to show y’all,” Nolley said.

Notes: The last-place Tar Heels are 0-4 this month, including home losses to Georgia Tech, Pittsburgh and Clemson and last weekend's loss at Pitt. … UNC point guard Cole Anthony (19.1 ppg) has missed eight straight games with a knee injury. UNC coach Roy Williams said Monday he had no idea when Anthony will be back. Williams said Anthony had yet to resume practicing. … UNC leads the ACC in rebounding margin but ranks last in both turnovers (16.8 per game) and free-throw percentage (64.8%). UNC ranks 14th in field-goal percentage (40%) and 13th in 3-point field-goal percentage (29.1%). "We're not making any 3s, so we'll go out and guard them and they'll pack it in the lane and try to guard us," Williams said. “We’re shooting so poorly, God, I wish we didn’t even have the 3-point line.” … Tech coach Mike Young faced UNC in three of the past four seasons, when he was steering Wofford. Young's Terriers won at UNC in December 2017. "Wofford had great shooters and I think these guys have great shooters," Williams said.