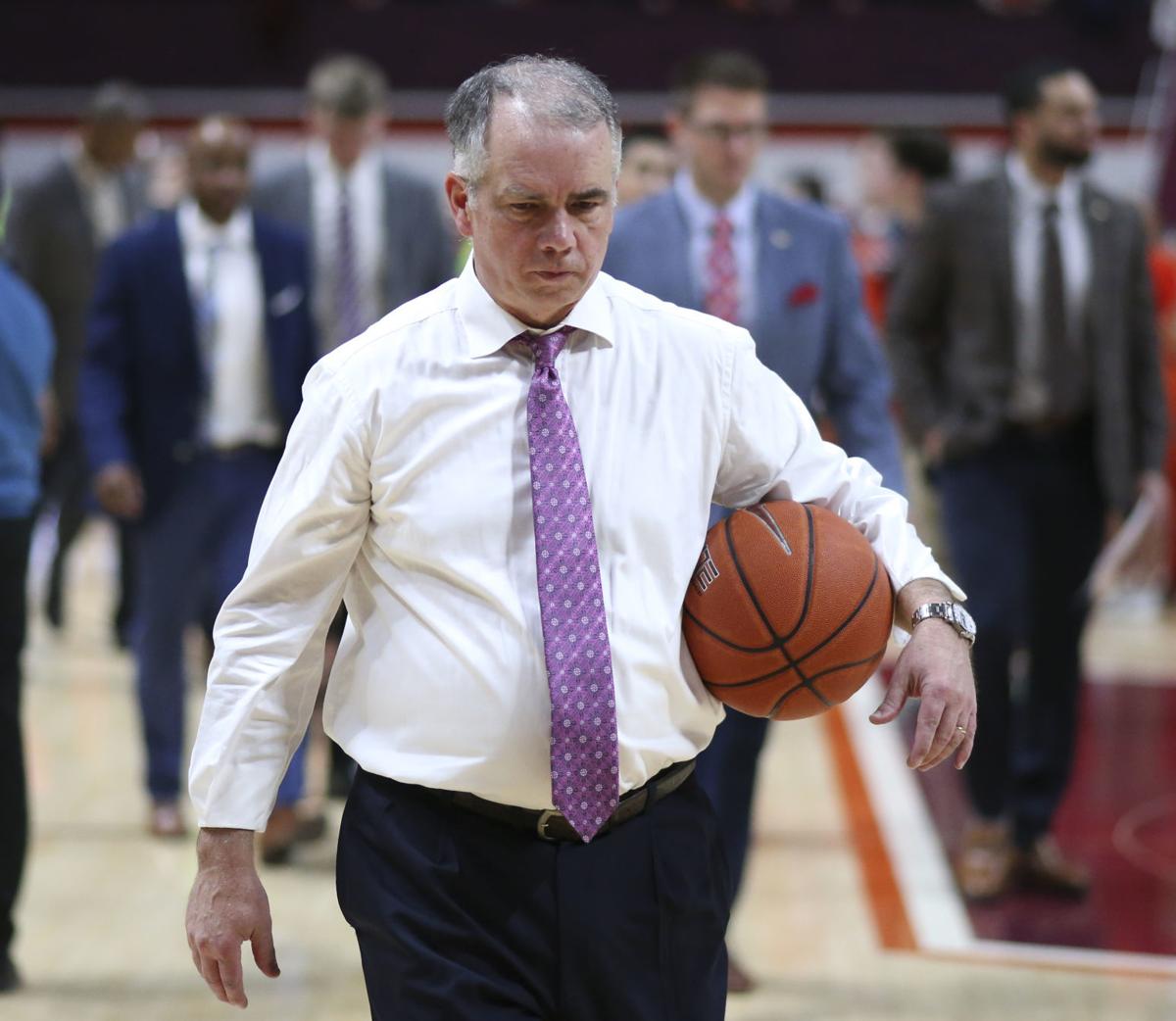 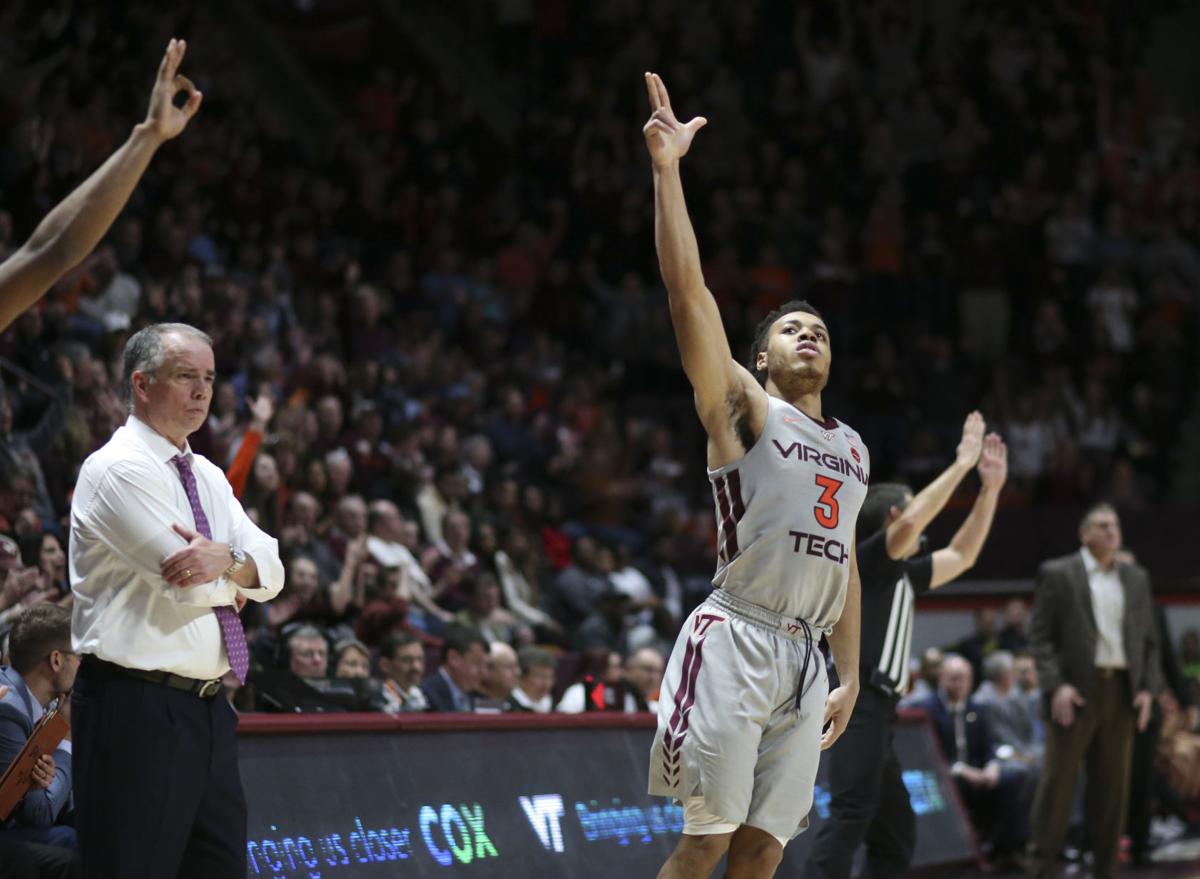 Virginia Tech’s Wabissa Bede (right) reacts to making a 3-pointer at the start of overtime in last weekend’s loss. Tech has not made more than eight 3-pointers in any game during its five-game skid. 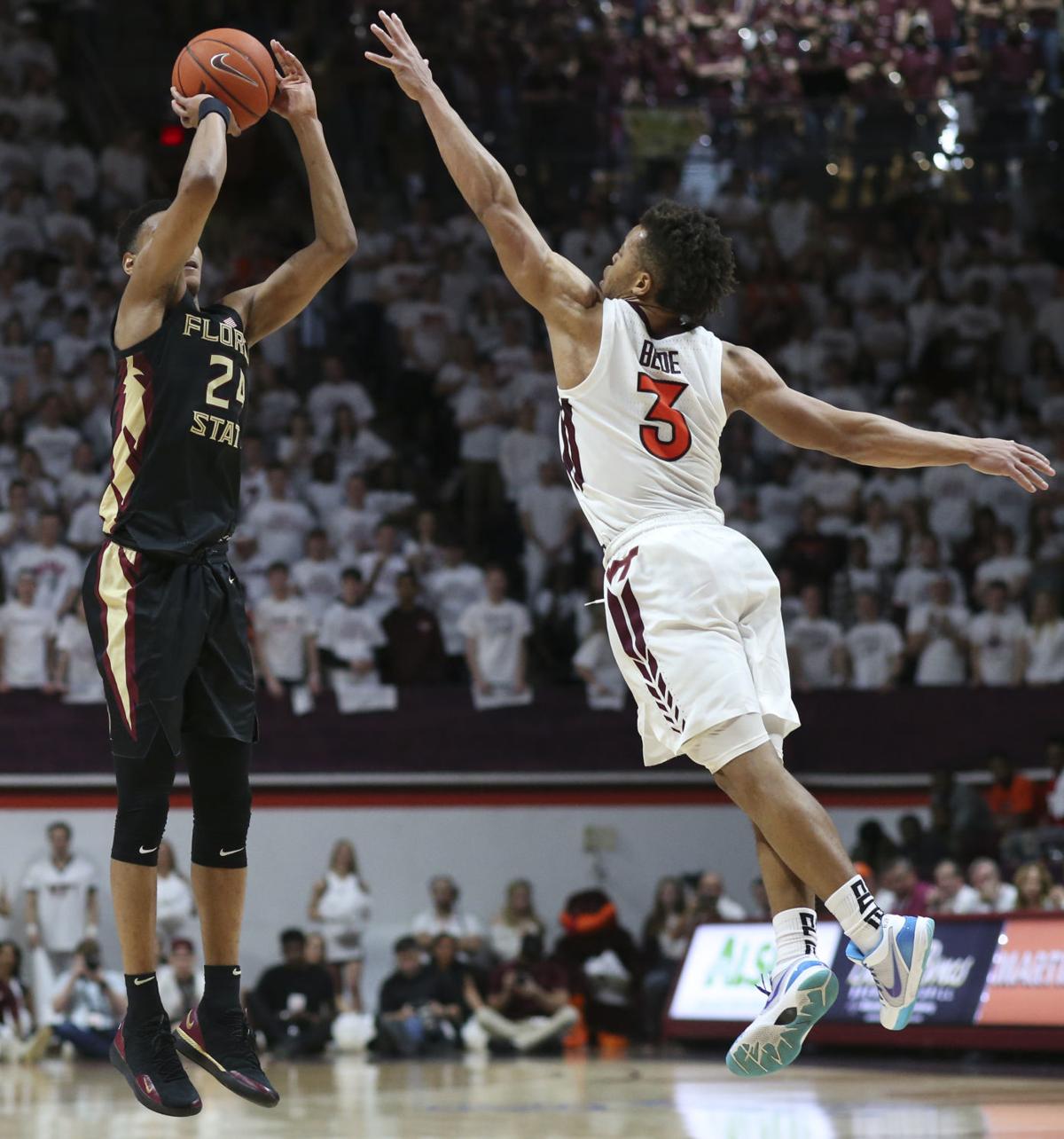 Florida State’s Devin Vassell shoots a 3-pointer over Virginia Tech’s Wabissa Bede during Tech’s Feb. 1 loss. The Hokies are allowing an average of 71.8 points in their five-game skid. 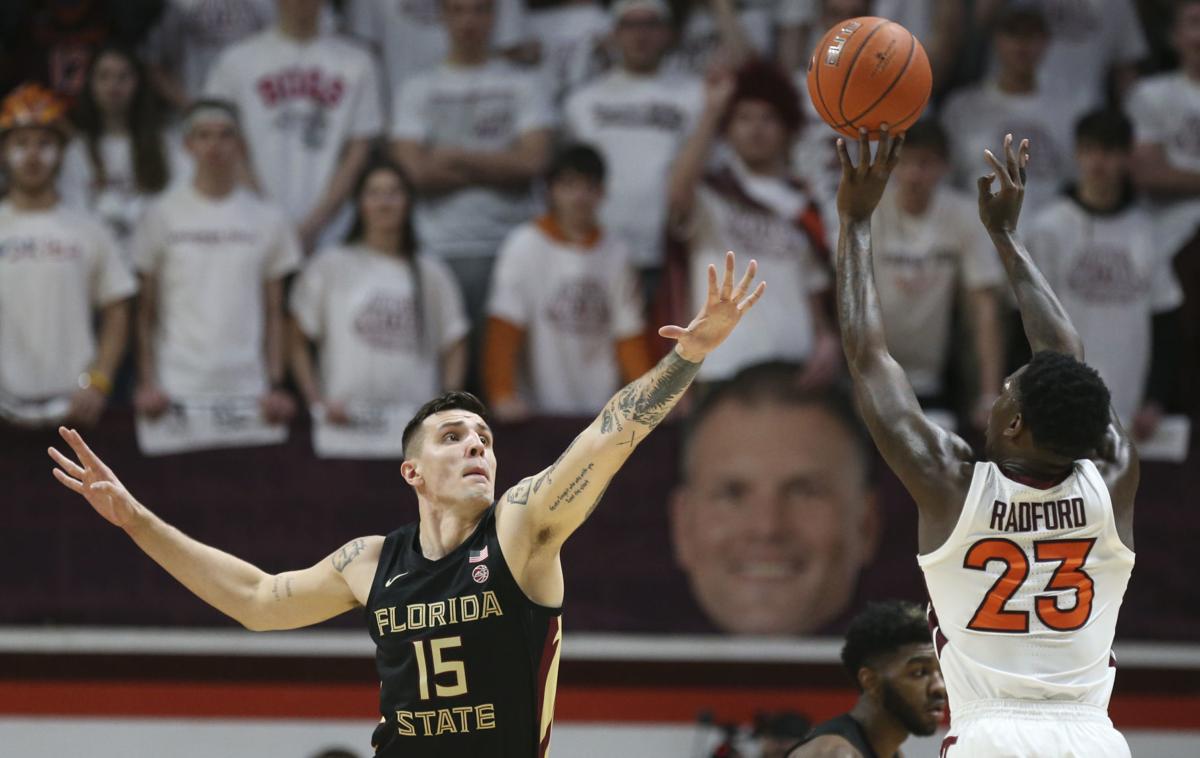 Tyrece Radford of Virginia Tech shoots a 3-point basket over Dominik Olejniczak (15) of Florida State during the Hokies’ Feb. 1 loss. The Hokies have not made more than eight 3-pointers in any game during their five-game skid.

Virginia Tech’s Wabissa Bede (right) reacts to making a 3-pointer at the start of overtime in last weekend’s loss. Tech has not made more than eight 3-pointers in any game during its five-game skid.

Florida State’s Devin Vassell shoots a 3-pointer over Virginia Tech’s Wabissa Bede during Tech’s Feb. 1 loss. The Hokies are allowing an average of 71.8 points in their five-game skid.

Tyrece Radford of Virginia Tech shoots a 3-point basket over Dominik Olejniczak (15) of Florida State during the Hokies’ Feb. 1 loss. The Hokies have not made more than eight 3-pointers in any game during their five-game skid.

On Jan. 23, the surprising Hokies were tied for fourth place with a 5-3 league mark.

But since then, the slumping squad has devolved into the also-ran it had been expected to be.

“It’s not the most comfortable feeling,” Hokies coach Mike Young said. “Nobody wants to pop out of this thing and win games again any more than I do, any more than my team does.”

The Hokies, who have dropped to 12th place in the 15-team ACC, have four freshmen and two redshirt freshmen in their nine-man rotation.

Have there been signs of inexperience rearing its head during the slump?

“Yeah, I think I could point to a couple of areas,” Young said Monday. “But at practice this morning, we had another very good practice. They’re working at it.

“If we continue to get that level of effort in our practice, we’re going to be just fine.”

The Hokies have been idle since falling 77-73 in overtime to visiting Boston College last Saturday.

This is Tech’s longest skid since a five-game slide four years ago.

“I’ve got to find a way to pull us out,” Young said. “I thought we played very good basketball in spurts on Saturday.

“With the exception of the Georgia Tech game [a 76-57 loss], I thought we’ve done some really good things — just not enough of them. We are a victim of a number of little things that add up to big things.”

If the Hokies lose again Saturday, it will be their longest skid since they endured a pair of seven-game losing streaks during the 2014-15 campaign. That was Buzz Williams’ first season as Tech’s coach.

Last weekend’s loss was the only time during this skid that Tech managed to score more than 63 points.

The zone defenses of Georgia Tech and Boston College have given the Hokies trouble during the slump.

The Hokies are averaging just 6.8 3-pointers in this skid. They were ranked third nationally with an average of 10.6 3-pointers before the slump but have not made more than eight 3-pointers in any game of this skid.

Virginia Tech is shooting 27.9% from 3-point range during the slide, down from 37.4% prior to the slump.

“We’re not making as many 3s as we need to make, as we should make,” Young said.

The Hokies were averaging 15.8 assists and just 9.5 turnovers before the slump; they ranked second nationally in assist-turnover ratio and first in fewest turnovers per game.

But they are averaging 12.0 assists and 11.2 turnovers during the skid. They have almost as many turnovers (56) as assists (60) during this slide.

“Conversion from offense to defense, defense to offense, we have got to get better in that area,” he said.

Virginia Tech has allowed an average of 71.8 points during the skid.

Pitt is coming off a 72-52 home loss to Clemson on Wednesday.

Panthers coach Jeff Capel had said Monday that he was concerned about his team hitting a wall this season.

“It’s something I do worry about, not just physically but the mental aspect of it when you’re dealing with young guys,” Capel said.

Pitt already owns more overall and ACC wins than it did last season, when the Panthers were 14-19, 3-15 in Capel’s first year at the school.

“I did expect us to be better than we were last year because of the experience from the three freshmen that are sophomores now, from Terrell [Brown] that’s [gone] from a sophomore to a junior,” Capel said. “And then I thought some of the new guys that we were able to get were talented.

“We’ve been able to win some close games, where last year we didn’t do that.”

Pitt ranks second in the ACC in turnover margin and third in turnovers forced (15.6 per game).

“We struggle to score, and so … if we can force turnovers that get us out in transition, that helps,” Capel said.

Notes: Tech has beaten Pitt four straight times. … Pitt has not won in Blacksburg since February 2003. … Pitt's six ACC wins are twice as many as the team had the past two years combined. The six victories are the most ACC wins for Pitt since the team went 9-9 in ACC play in the 2015-16 season, which was Jamie Dixon's final year as the school's coach. … Champagnie is a two-time ACC freshman of the week. … Tech is the only team in the nation with four freshmen averaging at least 7.4 points (Nolley, Alleyne, Radford and Jalen Cone).