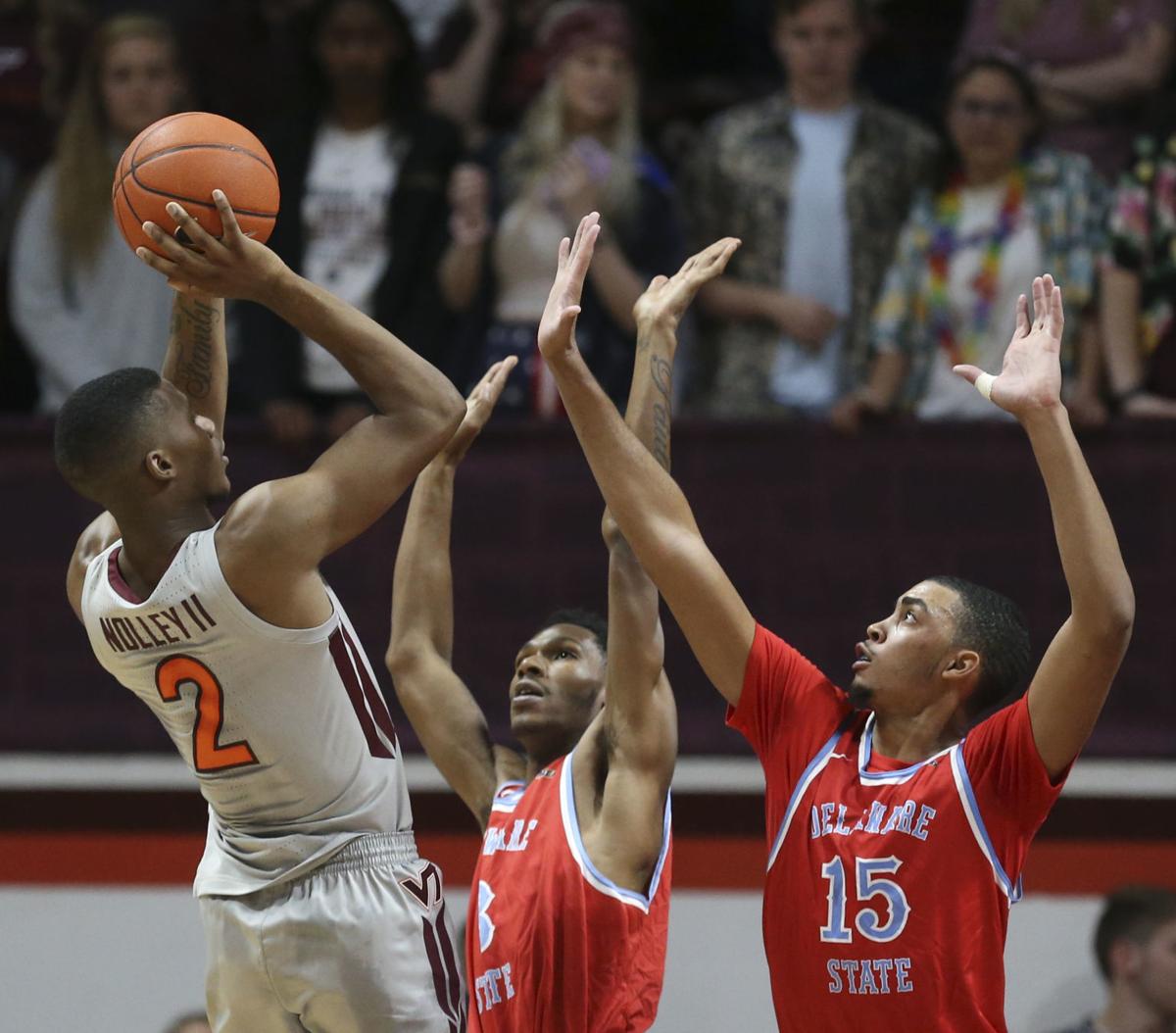 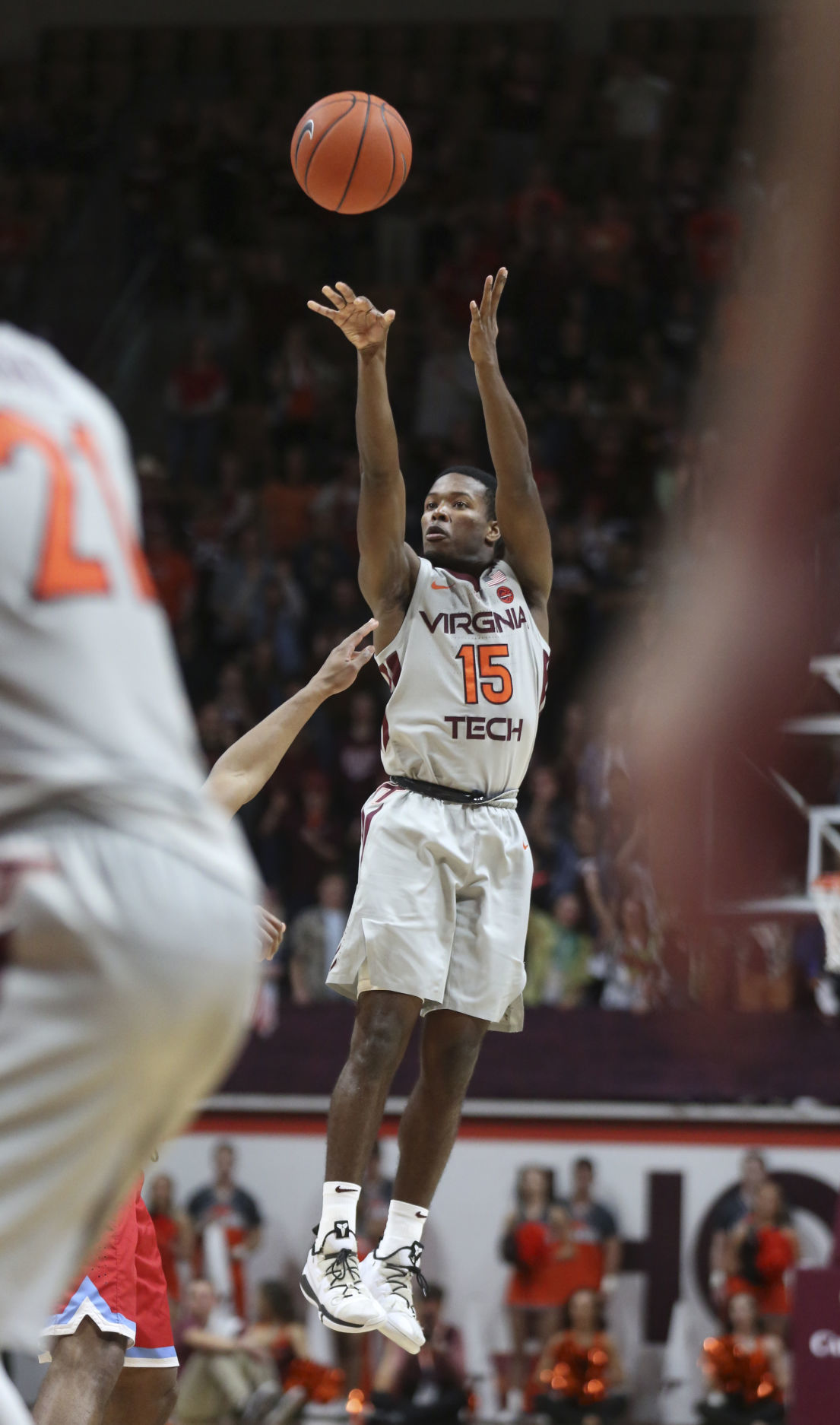 Jalen Cone of Virginia Tech shoots a 3-point basket in the second half of his team’s win. Cone had 17 points and five of the team’s 21 3-pointers. 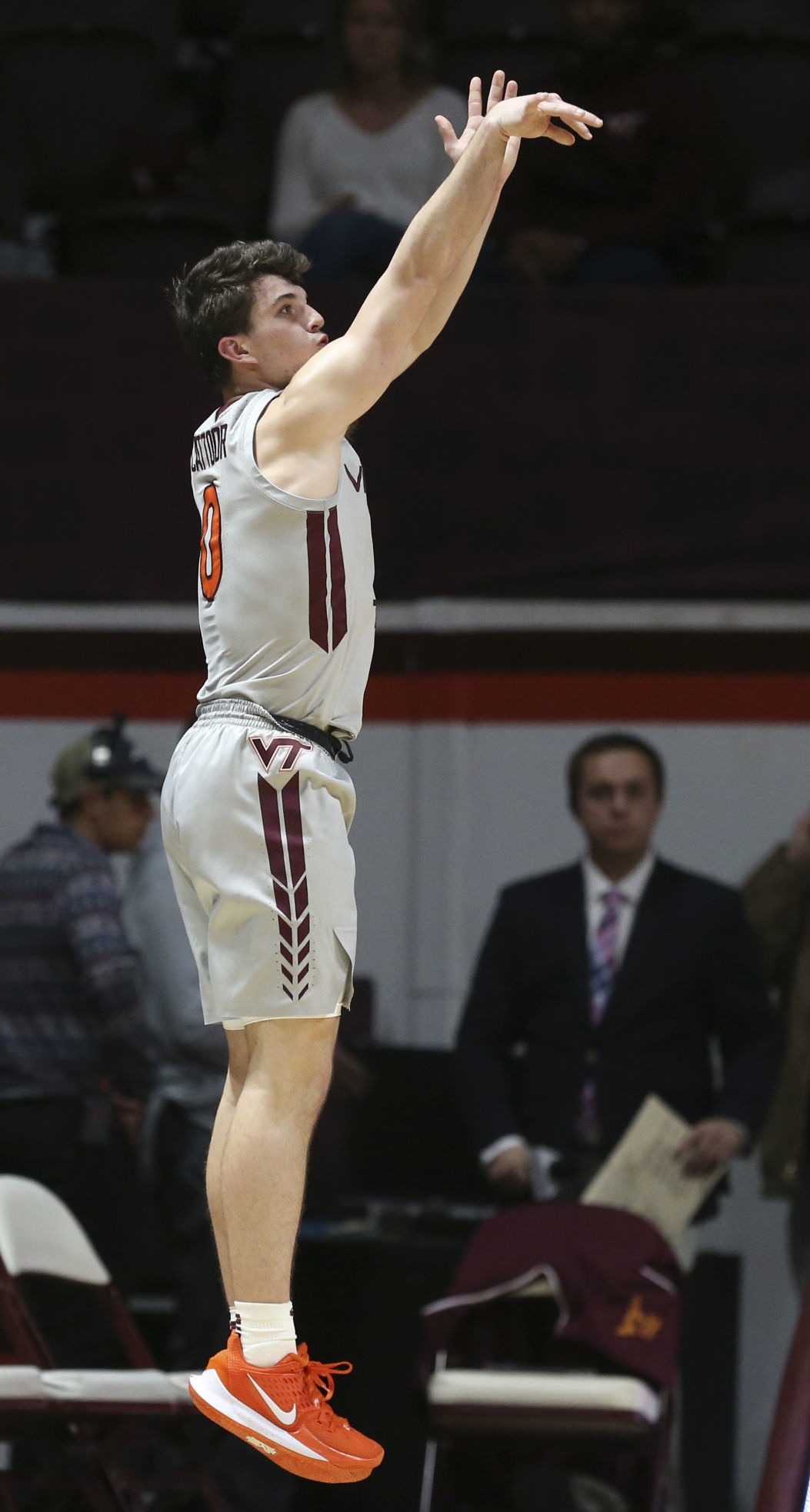 Hunter Cattoor of Virginia Tech shoots a 3-point basket in the team’s win over Delaware State. He had two of the team’s 21 3-pointers. 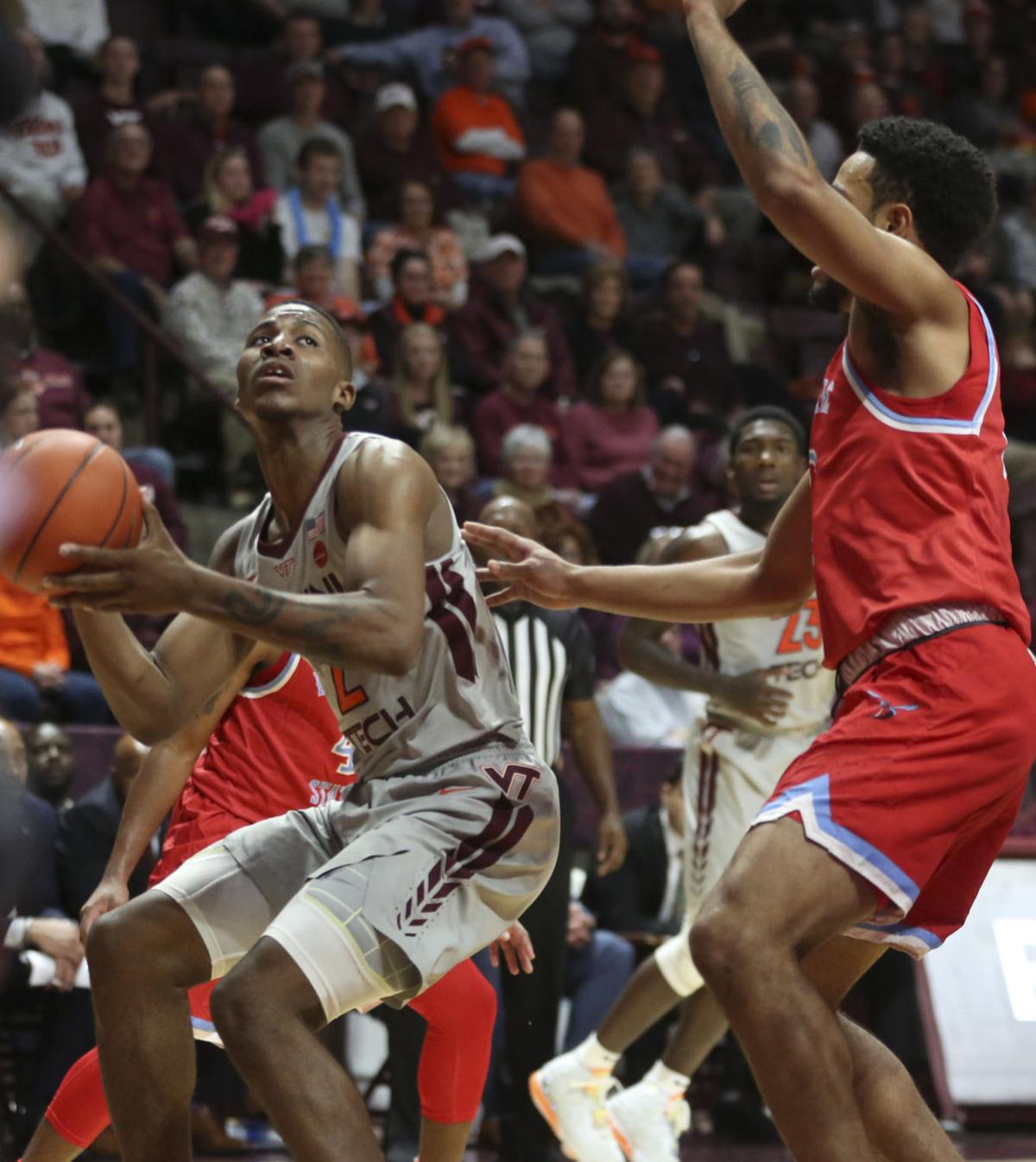 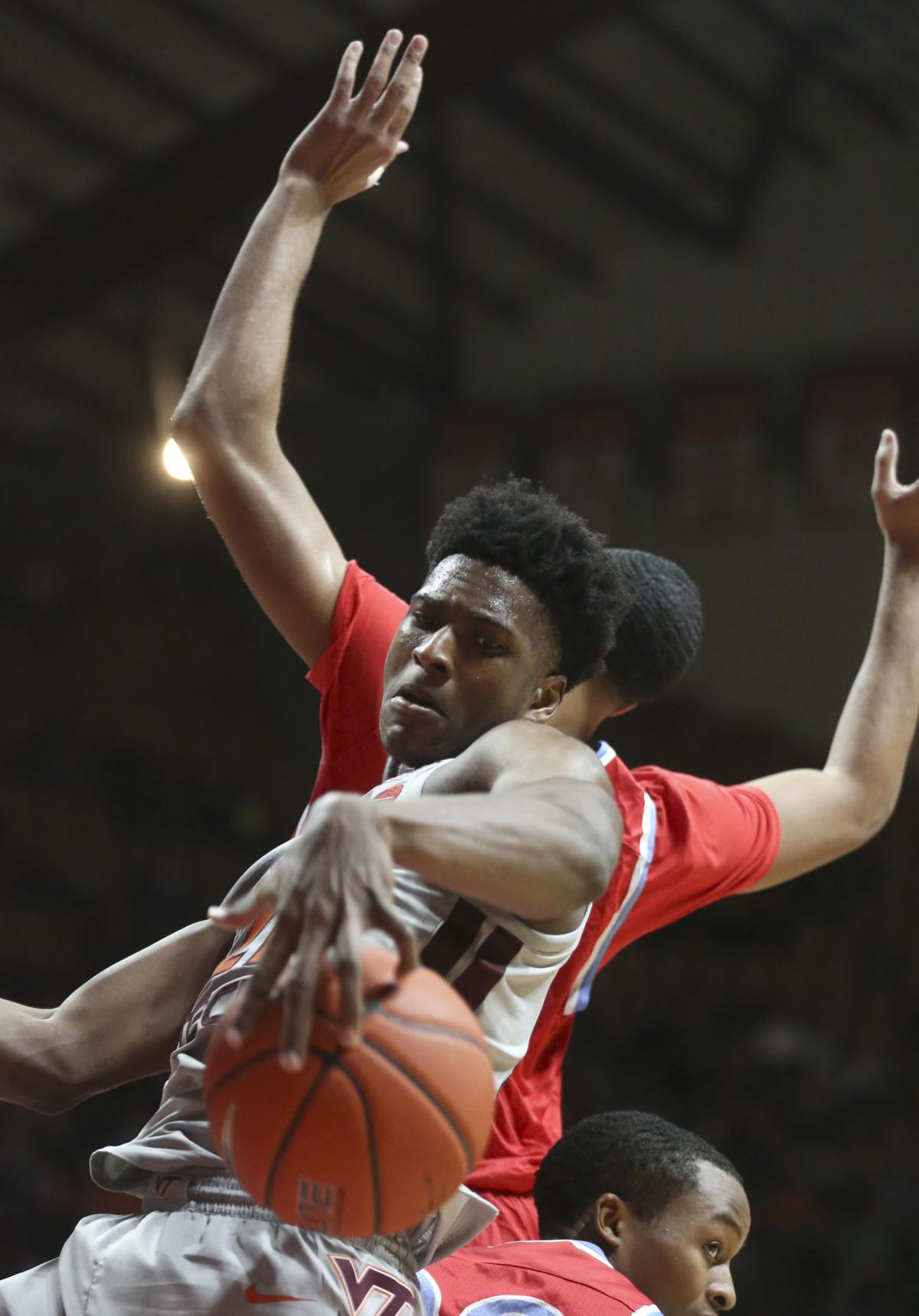 John Ojiako of Virginia Tech grabs a rebound in the team’s win.

Jalen Cone of Virginia Tech shoots a 3-point basket in the second half of his team’s win. Cone had 17 points and five of the team’s 21 3-pointers.

Hunter Cattoor of Virginia Tech shoots a 3-point basket in the team’s win over Delaware State. He had two of the team’s 21 3-pointers.

John Ojiako of Virginia Tech grabs a rebound in the team’s win.

BLACKSBURG — Amid a barrage of 3-pointers, a Virginia Tech record fell on Wednesday night.

The Virginia Tech men’s basketball team sank a school-record 21 3-pointers in a 100-64 win over Delaware State on Cassell Coliseum.

“Oh, cool!” point guard Wabissa Bede said when told of the record after the win.

Virginia Tech (5-0) broke the old mark of 18, which was set last December in a 94-40 rout of Central Connecticut State.

“Everybody’s in the gym, getting up shots,” said freshman reserve guard Jalen Cone, who had 17 points and who was 5 of 7 from 3-point range. “We’re either coming to practice early or staying after practice, and we’re always just shooting, having competitions. I think everybody prepares to knock down open shots when it comes their way, so I think it was just something that was just in our instincts.”

Freshman guard Nahiem Alleyne had 20 points. He was 5 of 9 from 3-point range.

“[It was due to] moving around, cutting to open spots, passing the ball around,” Alleyne said. “Coach always emphasizes, ‘Screen for others, then you’ll get an open shot or your man gets an open shot.’ ”

“They were playing help defense and helping in the gaps a little too much,” Cone said. “Coach Young and our staff has done a phenomenal job of [saying] to keep moving. Even after you get rid of the ball, move without the ball to confuse the defense and you wind up open.”

Isaiah Wilkins had 15 points and seven assists off the bench. He was 5 of 7 from 3-point territory.

Seven Hokies made at least one 3-pointer.

“We have a number of kids that can shoot the ball,” Young said. “I empower them. Leather hits your hands, let it rip if you’re open and you’re in rhythm and it’s a practice shot.

It was the fourth straight game in which Tech made at least 11 3-pointers.

Will undersized Tech be a pretty good 3-point shooting team all season long?

“I think so. I hope so. We better be,” Young said. “Let’s be honest, we are who we are. I wish I had two big ones down there that I could throw the ball to. We don’t get fouled enough. We don’t have the opportunity to throw it down to the block and see how you’re going to guard it and play out of that — that’s how I’m most comfortable playing.

Wednesday’s game was the first time Tech scored at least 100 points since a 103-79 win over Washington two years ago.

Bede had 10 assists for Tech, which shot 56.5 percent from the field.

It was Tech’s final game before heading to Hawaii on Friday for next week’s Maui Invitational.

Is Tech ready to step up in weight class from Delaware State to Michigan State?

Nine Hokies played at least 15 minutes Wednesday, with none playing more than 31 minutes.

Young wanted to keep Bede and P.J. Horne fresh for Maui, when Tech will have to play three games in three days.

Landers Nolley II had 10 points and two 3-pointers for Tech.