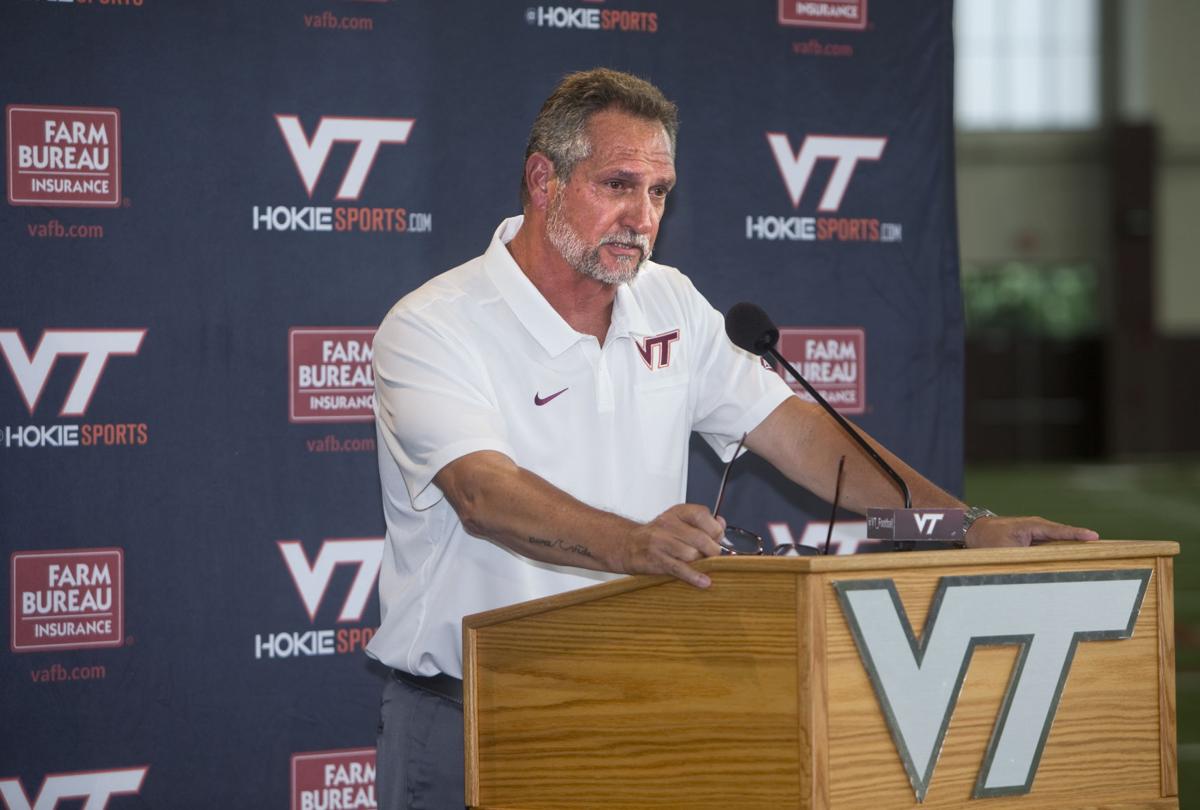 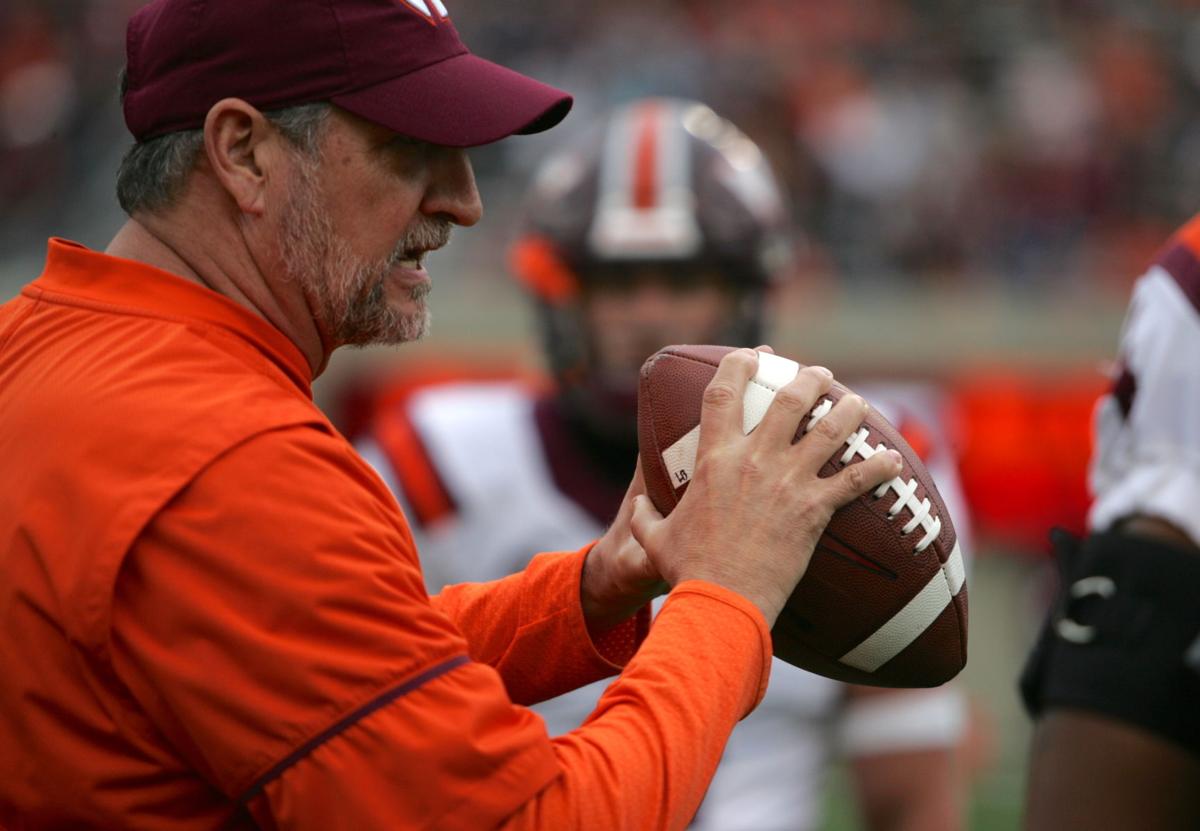 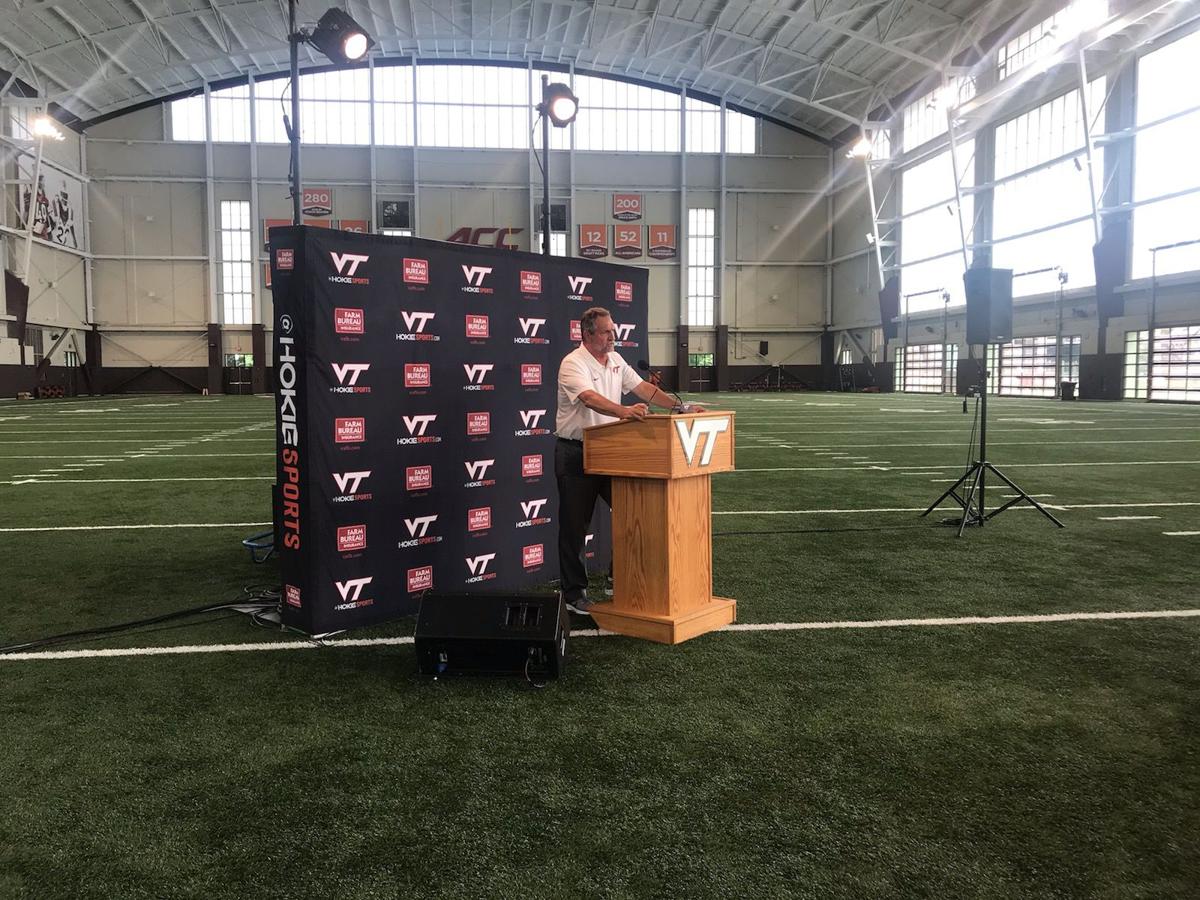 Bud Foster shocks Hoakie Nation during Virginia Tech's media day in Blacksburg on Thursday with the news that he is stepping down at the end of the season.

Bud Foster shocks Hoakie Nation during Virginia Tech's media day in Blacksburg on Thursday with the news that he is stepping down at the end of the season.

Foster said Thursday he is stepping down after the 2019 season "on his own terms" — much like Beamer did four years ago.

The veteran Hokies assistant made the announcement at the team’s media day on Thursday. Foster’s wife, Jessie, and his son Grant were in attendance at the team’s indoor practice facility.

“I’m not sick, I’m not burned out, at least I hope I’m not sick,” Foster said, with a smile. “Nobody is forcing me out. It’s just going to be time when it’s all said and done.”

After taking this year’s team photo at Lane Stadium, coaches and players gathered in the team meeting room for a previously scheduled sit down about media day. Coach Justin Fuente told them 2019 was going to be a special year and introduced Foster to tell them why.

“I saw him today coming into work and he gave me a smile, but it was weird, I knew something was off,” Virginia Tech linebacker Dax Hollifield said. “The coaches took forever to come in and they had this aura like something was up.”

“I knew he was getting older and he’d been doing it forever, but I didn’t think it was going to be this year," Hollifield said. "I thought he could go forever — I picture him as a young man.”

Foster, currently FBS’s longest continuously serving assistant by seven years, was entering the final season of a five-year extension that he signed in 2014, a contract that made him one of the highest-paid defensive coordinators in the country. This latest round of contract negotiations were much different.

“In this business you don’t get the opportunity very often to go out on your terms,” Foster said. “I’ve been very blessed to have this opportunity."

Virginia Tech athletic director Whit Babcock hoped to sign Foster to an extension when they initially sat down to discuss a new contract after the spring.

“Everything has been great,” Babcock said, during an interview with The Roanoke Times in June. “… It’s more just in Bud’s court and where he is at. I know how old he is — that he’s probably thinking about how long do I want to do it, what’s next, that’s a natural thing in life.”

In Bud We Trust

Virginia Tech athletic director Whit Babcock on Bud Foster: “He’s a hall of famer in whatever hall of fames will come in the future. He’s perhaps or I don’t think perhaps, he is the greatest ever at his craft of defensive coordinator...the definition of a leader and I certainly want to celebrate that. His loyalty, his sense of place in this Hokie land, he personifies it, even that tough, strong Hokie stone. He’s the fabric of this place. He’s the brand, he’s the icon.”

Virginia Tech coach Justin Fuente on Bud Foster: “Everybody knows the rules, right? You don’t keep people around. You get rid of them. You don’t follow a Hall of Fame coach. You just know the kind of ground rules. But my first conversation, my first time meeting Bud...the way he was in the living room, my living room that day, is how he’s been every day since I’ve been here… the biggest thing he did was he threw his heart and soul into doing things slightly different, to a different practice schedule, a different work schedule, something different than what he’s had for many, many years. He was incredibly positive and supportive with our players and in and about town. He was everything that you could ever want in terms of having somebody that is all in for the team.”

Babcock had several more meetings with Foster in the following months — meetings which included coach Justin Fuente — but a final decision wasn’t made until recently.

Fuente thought his defensive coordinator might stick around for a few more years having seen how re-energized Foster was in recent weeks, which included a lake surfboarding session with a few players.

“I didn’t really know which way it was going to go, quite honestly,” Fuente said. “I know that we wanted him here if he wanted to be here. And I’ve made that clear to him on multiple occasions. But I didn’t know. … This was certainly a long, thought-out thought process and one that I think he’s come to peace with.”

That’s why Fuente hasn't spent much time thinking about a coaching search. Babcock pledged to offer the resources Fuente needs to get the candidate he wants, but there’s no time table in place and a decision isn’t “remotely close.”

“To be candid, I’ve been worried about today,” Fuente said. “Now I’m not copping out of the question. 'I’m not sure' is the answer to that. I don’t know. Certainly I’ll put plenty of thought into what we need and what we’re looking for. I don’t think it’s going to be a distraction for me as we go through the season.”

Once Foster made the decision, he said he wanted to announce it before the season so his contract status wouldn’t be a distraction for players this fall.

It’s why Foster doesn’t plan on talking much about the decision in the coming months either — he declined to take questions after his brief statement on Thursday — as he looks to keep everyone focused on the 2019 campaign.

“It was very hard on Bud, his first focus was always on the players,” Babcock said.

And turning around a Virginia Tech defensive that struggled last season with eight first-year starters.

The Hokies finished ranked 85th in scoring defense (31 points per game allowed), 98th in total defense (438.7 yards per game) and 106th in rushing defense (210.3). Foster also had issues with his knee — he had offseason surgery — and spent the end of the regular season coaching from the booth on doctor’s orders.

Foster hopes all those issues — on the field and off — are behind him as he looks to go out on a high note.

The 2019 season will be Foster’s 33rd with Virginia Tech and 39th overall. He followed Beamer from Murray State to Blacksburg when he was named the Hokies' head coach in 1987, and took over as defensive coordinator in 1995 (he was co-defensive coordinator for a season). Beamer stepped down after the 2015 season.

Virginia Tech has finished in the top five in scoring defense on seven different occasions under Foster, leading the nation twice (1999 and 2006), and led the nation in total defense in both 2005 and 2006.

Since Foster took as sole defensive coordinator in 1996, the Hokies have the most sacks (856) and interceptions (380) in the country. During that stretch 45 of his players have been drafted (11 in the first or second round).

Virginia Tech already has some tentative plans to honor Foster during his final season. The Hokies will honor the 1999 team that reached the national title game on Sept. 27, when they host Duke at Lane Stadium. The home game against Wake Forest on Nov. 9 will be “Bud Foster Night.”

“Maybe we’ll even ask everyone to grow a goatee,” Babcock said. “And that’s plenty of advance notice for people like me that take a while to grow one. Maybe we’ll do that. We will get there and we will do that and we will do it right because transitions are important at Virginia Tech.”