Virginia Tech’s Ian Seymour has been rated the No. 95 prospect in next month’s Major League Baseball draft by Baseball America. His best pitch is his change-up. 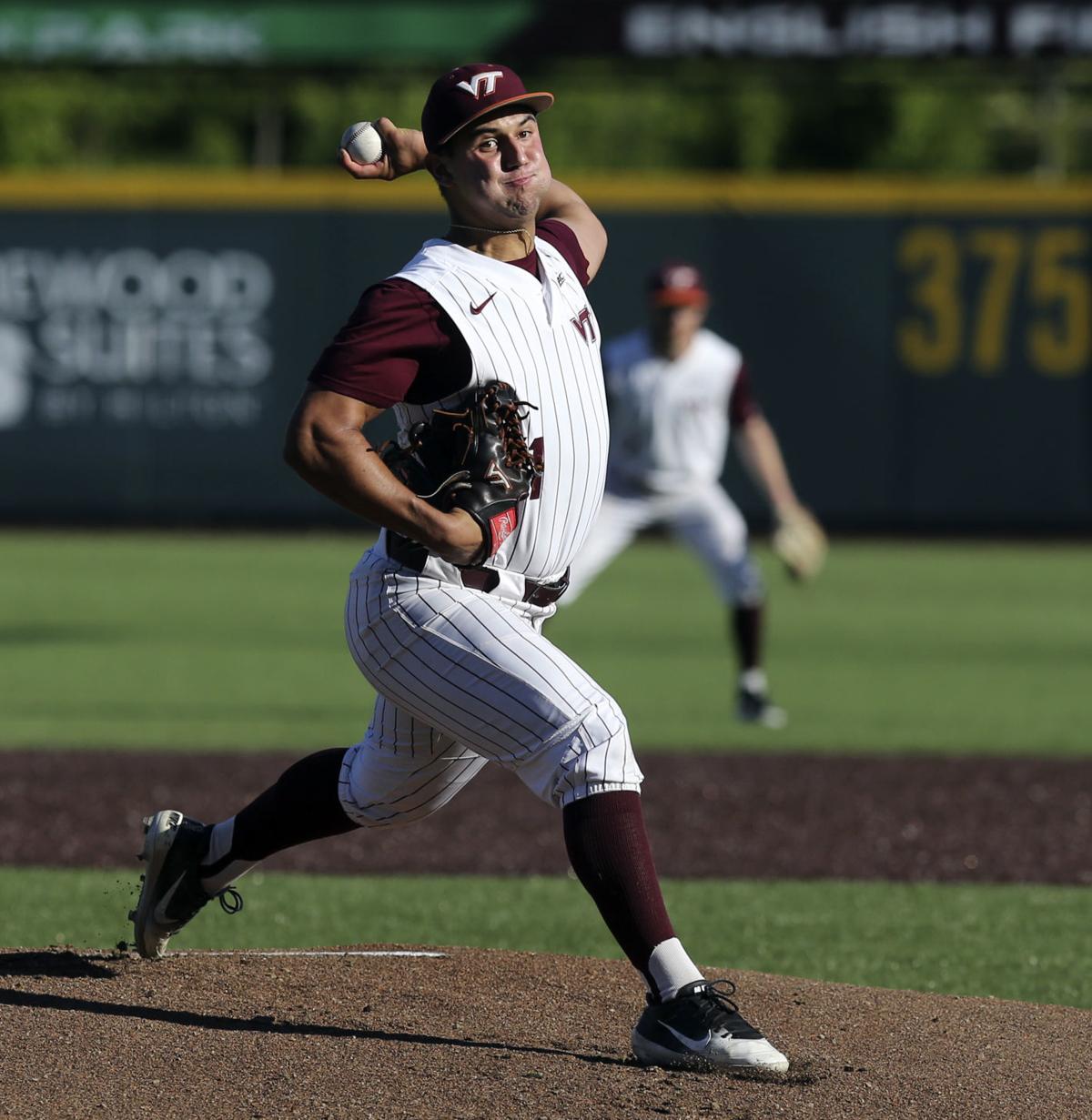 Virginia Tech starting pitcher Ian Seymour is expected to be chosen in the major league amateur draft next month, even though the draft has been shortened to five rounds. 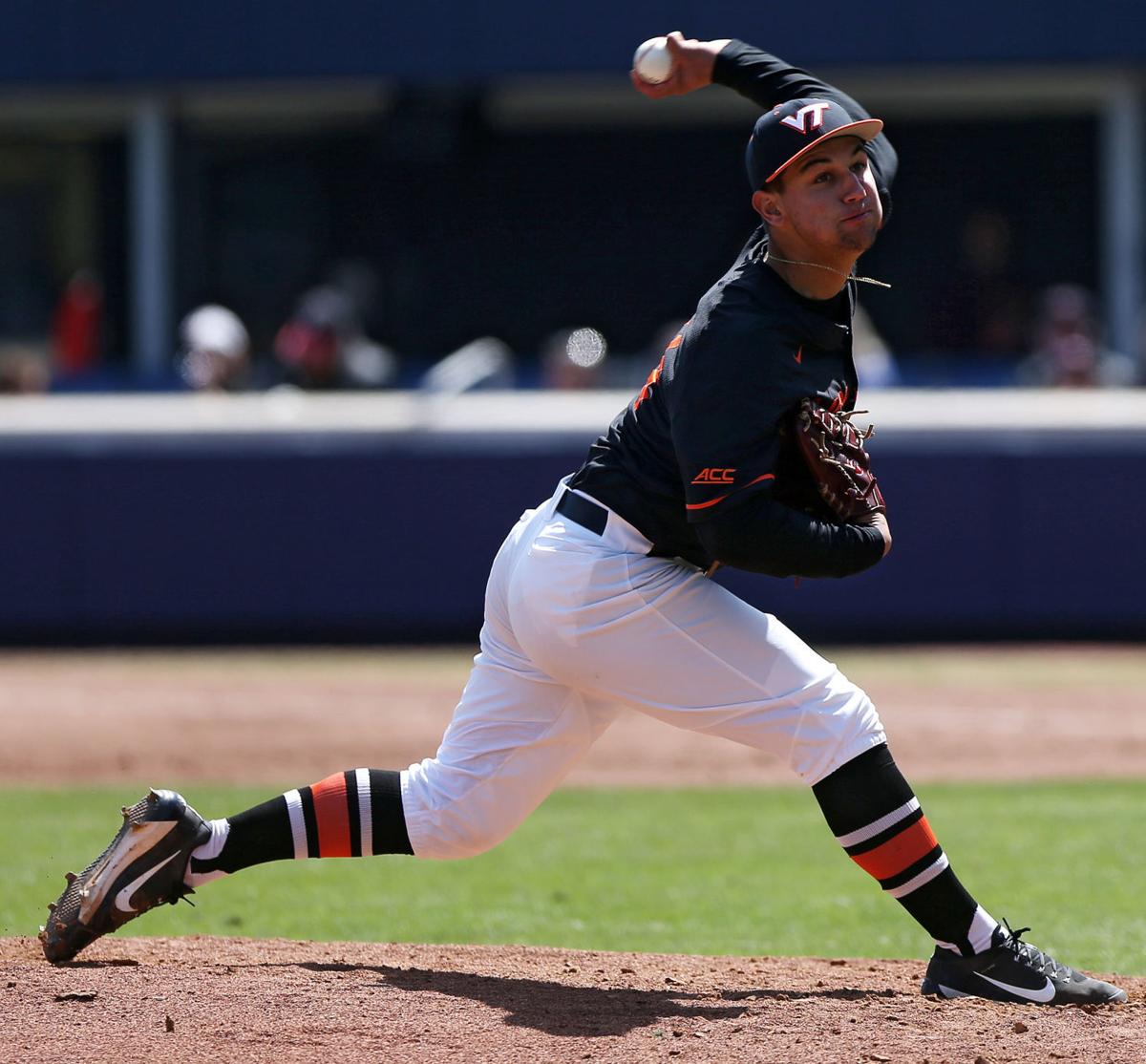 Virginia Tech pitcher Ian Seymour has been a starter in ACC games since he was a freshman. He was clocked this year at 94 mph.

Virginia Tech’s Ian Seymour has been rated the No. 95 prospect in next month’s Major League Baseball draft by Baseball America. His best pitch is his change-up.

Virginia Tech starting pitcher Ian Seymour is expected to be chosen in the major league amateur draft next month, even though the draft has been shortened to five rounds.

Virginia Tech pitcher Ian Seymour has been a starter in ACC games since he was a freshman. He was clocked this year at 94 mph.

Ian Seymour was not drafted out of high school.

But after three years at Virginia Tech, the junior left-hander has blossomed into a pitcher who will likely be chosen in next month’s Major League Baseball amateur draft.

“It’d be a dream come true,” Seymour said last week while on a Zoom call with reporters. “That’s just the result of a lot of work throughout the years, if that would be something that happened. It’d be really exciting.”

The draft would normally be 40 rounds. But major league teams did not want to spend the money on that many draft picks this year because of the coronavirus pandemic, so the draft has been shortened to five rounds this year.

Seymour is still a safe bet to be selected in the draft, which will be held June 10-11.

“I expect him to get drafted,” said a major league scout who asked to remain anonymous. “I don’t expect it to be early in that scenario, but I would think that he gets drafted.”

Only 160 players will be chosen this year. But Baseball America ranks Seymour the No. 95 draft prospect in the country.

The shortened draft is “definitely disappointing” for Seymour, but he still expects to be picked. He is not dwelling on what might happen, though.

“I did everything I could … to put myself in the best position for success, so you just have to be happy with that. And whatever happens I’m okay with,” he said.

Seymour verbally committed to Virginia Tech during the fall of his junior year at St. John’s High School in Massachusetts. Patrick Mason, a Massachusetts native and former Northeastern assistant, was Tech’s head coach at the time.

But Mason was fired in May 2017 — on the day Seymour graduated from high school.

John Szefc left Maryland to become Tech’s new head coach, and Terrapins pitching coach Ryan Fecteau made the move with him. Fecteau had once been an assistant at Bryant University in Rhode Island, so he was already aware of Seymour’s potential from the recruiting trail.

Seymour has been a starter in the Hokies’ weekend series against ACC foes since he was a freshman. He made the ACC all-freshman team in 2018, when he was 3-3 with a 4.17 ERA and 70 strikeouts in 69 innings.

“He came in at a time where the program needed a legitimate left-handed starter,” Szefc said. “It might have benefited him to pitch on Tuesdays as a freshman, but we needed him to pitch at a higher level than that.

“That contributed to him getting good quick, because he pitched a lot.”

Seymour was 4-5 with a 3.97 ERA, 81 strikeouts and 24 walks in 70 1/3 innings as a sophomore. He was named one of the national players of the week by Collegiate Baseball after taking a no-hitter into the ninth inning against North Carolina.

He fared well last summer in the Cape Cod League, which is the most prestigious summer circuit for college players. He went 2-2 with a 2.48 ERA and ranked third in the league in strikeouts (39).

“I used to throw all two-seam fastballs,” he said. “I switched to a four-seam, just playing catch, and I had better command with it. … It just creates a differential between that and my change-up.”

Seymour was 3-0 with a 2.21 ERA, 40 strikeouts and five walks in 20 1/3 innings as a junior before the season came to a premature end in March because of the pandemic.

“The fastball and change-up kind of play off each other really well,” the major-league scout said.

The 6-foot, 215-pound Seymour is 30 pounds heavier than he was as a Tech freshman. Hitting the weight room improved the velocity of his fastball.

Seymour threw 84-89 mph as a freshman, said Szefc. The scout said he clocked Seymour’s fastball this year at 94 mph.

Seymour mainly threw change-ups as a freshman, but his repertoire now also features the four-seam fastball, a cut fastball and a slider.

But his best pitch is his change-up.

“He’s got a legitimate swing-and-miss change-up,” Szefc said. “He throws it with the same arm speed he throws his fastball with, and he commands the [strike] zone. … Righties or lefties, it doesn’t matter to him.”

Seymour struck out 14 batters in six innings in a March 8 game against Georgia Tech, breaking the school mark for the most strikeouts in an ACC regular-season game.

“They ran eight or nine right-handed hitters out there and he chewed most of them up with his change-up,” Szefc said.

Seymour earned national player of the week honors for the third time in his career.

“I left that game kind of upset because I walked three people,” Seymour said. “It turns out that was my last start of the year, so I guess I should have enjoyed it a little bit more.”

The 11-5 Hokies saw their season come to an end later that week.

“You miss competing,” Seymour said. “What I love to do most in the world is go out there, try to strike someone out. You’re no longer able to do that.”

Seymour and his roommates — fellow Tech pitchers Zach Brzykcy and Nolan Wilson — have remained in Blacksburg since the pandemic. Tech players can use English Field for personal, unsupervised workouts, so the three of them play catch with each other.

Luke Goforth, who would have been a senior catcher on the Blacksburg High School team this year, joins them on Mondays and Fridays to catch their bullpen sessions.

“His change-up is probably the dirtiest change-up I’ve ever seen — a lot of movement,” said Goforth, a Carson-Newman signee. “Being able to catch those guys has made up a lot for not having a senior year [of high school baseball].”

Although Seymour has been a starter for the Hokies, the scout expects him to be a reliever in pro ball because of his delivery.

“There’s some violence and effort through the release and the finish,” the scout said. “If I put him into a … relief role, … he can go with that effort in shorter stints.”

“He’ll be really successful in the pro game,” Szefc said.

Freshman season: 3-3 with 4.17 ERA, 70 strikeouts and 29 walks in 69 innings; ACC all-freshman team; named one of the national players of the week.

This season: went 3-0 with 2.21 ERA, 40 strikeouts and five walks in 20 1/3 innings; struck out 14 batters against Georgia Tech; was twice named one of the national players of the week.

Draft potential: rated No. 95 prospect in nation by Baseball America.

June 10: First round and supplemental round