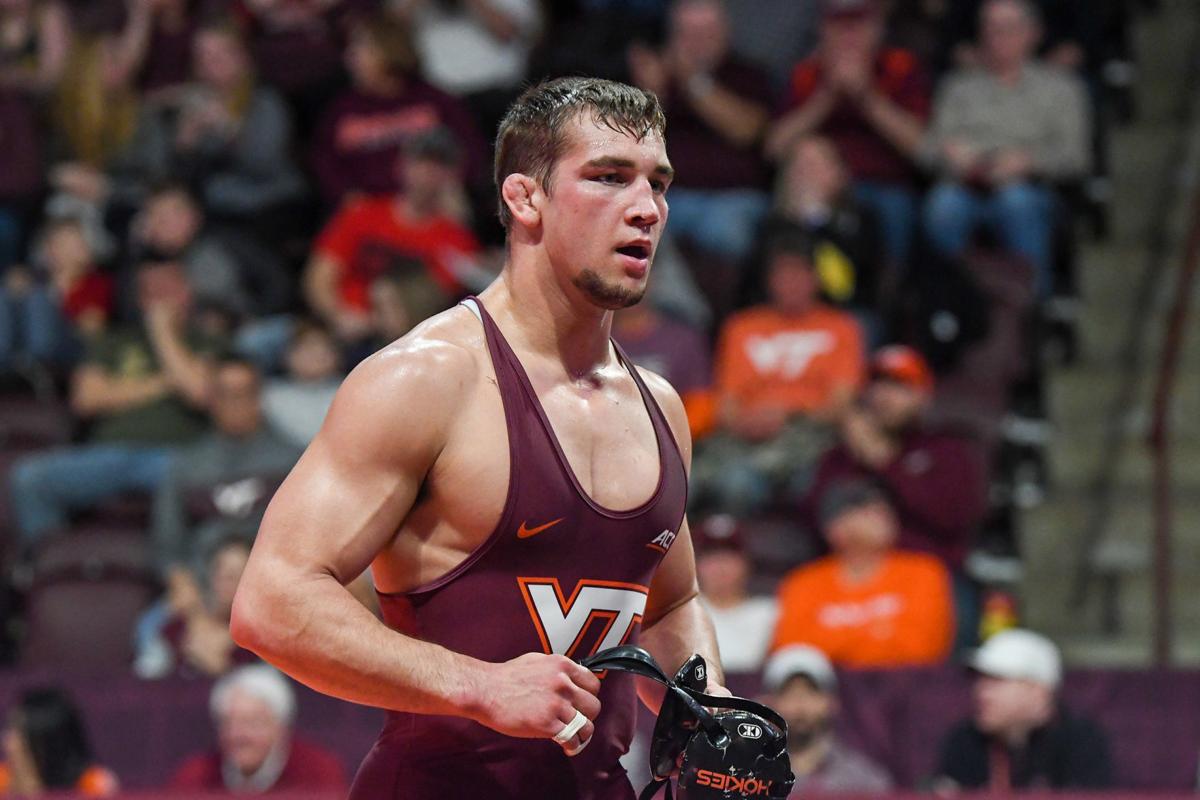 Virginia Tech third-year sophomore Hunter Bolen, who was a three-time state champ at Christiansburg High School, is ranked No. 2 in the nation at 184 pounds. Bolen is 9-0 in dual matches for the Hokies (8-1, 0-1 ACC) this season. 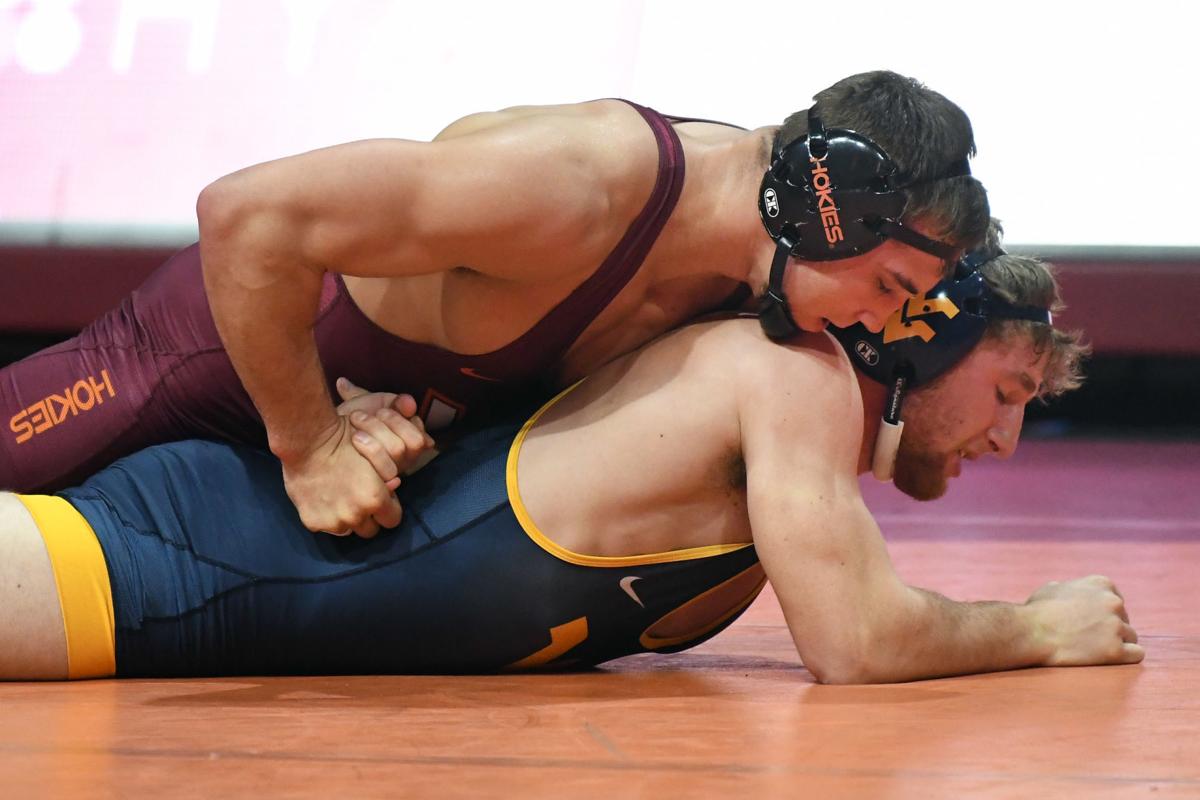 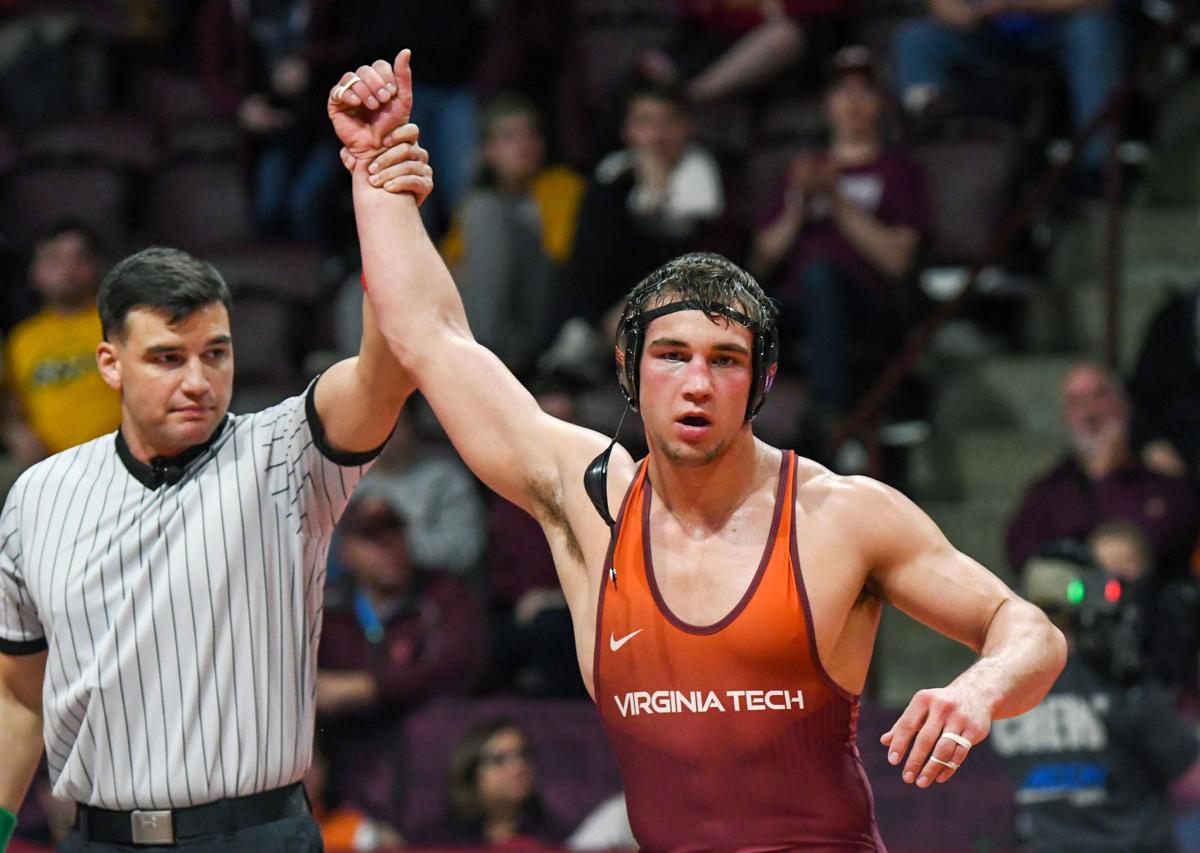 Virginia Tech third-year sophomore Hunter Bolen (right), who was named the Timesland wrestler of the year as a Christiansburg senior, is ranked No. 2 in the country at 184 pounds. 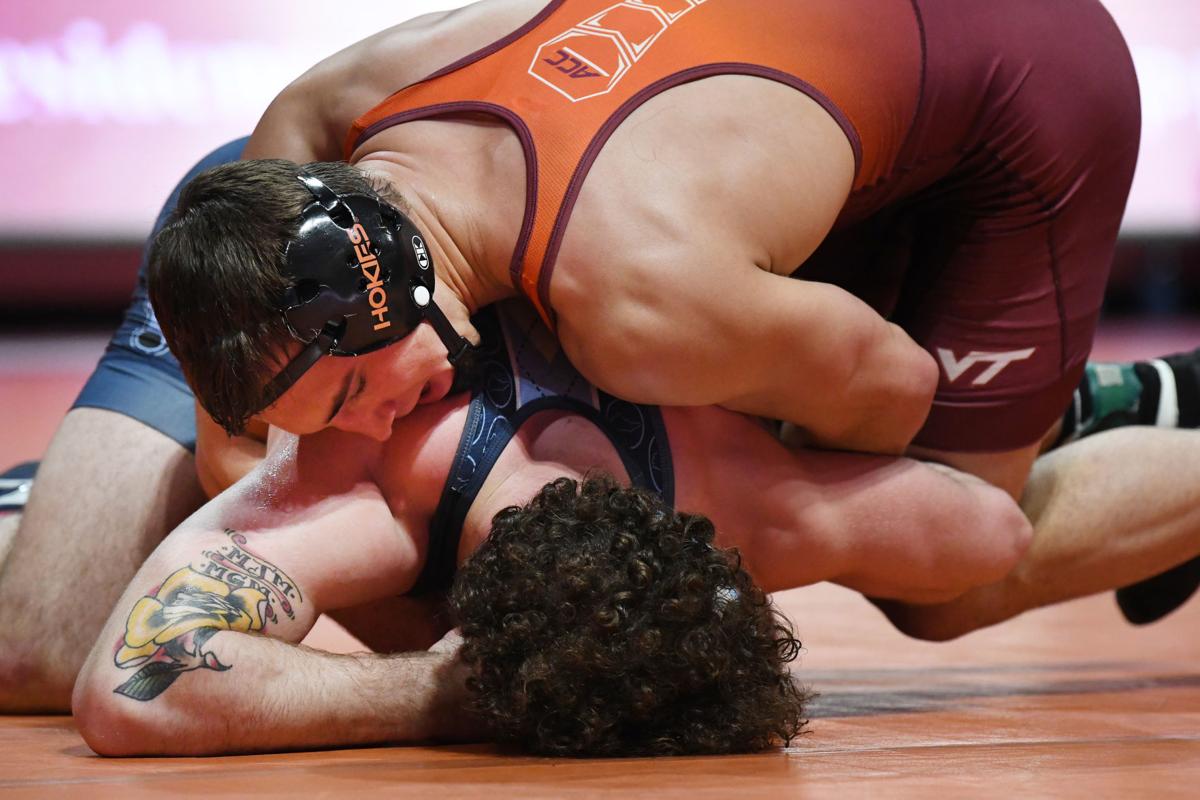 Virginia Tech third-year sophomore Hunter Bolen (top) is 19-1 this season at 184 pounds, including 9-0 in the team’s dual matches. His team is ranked No. 7 in the coaches poll. 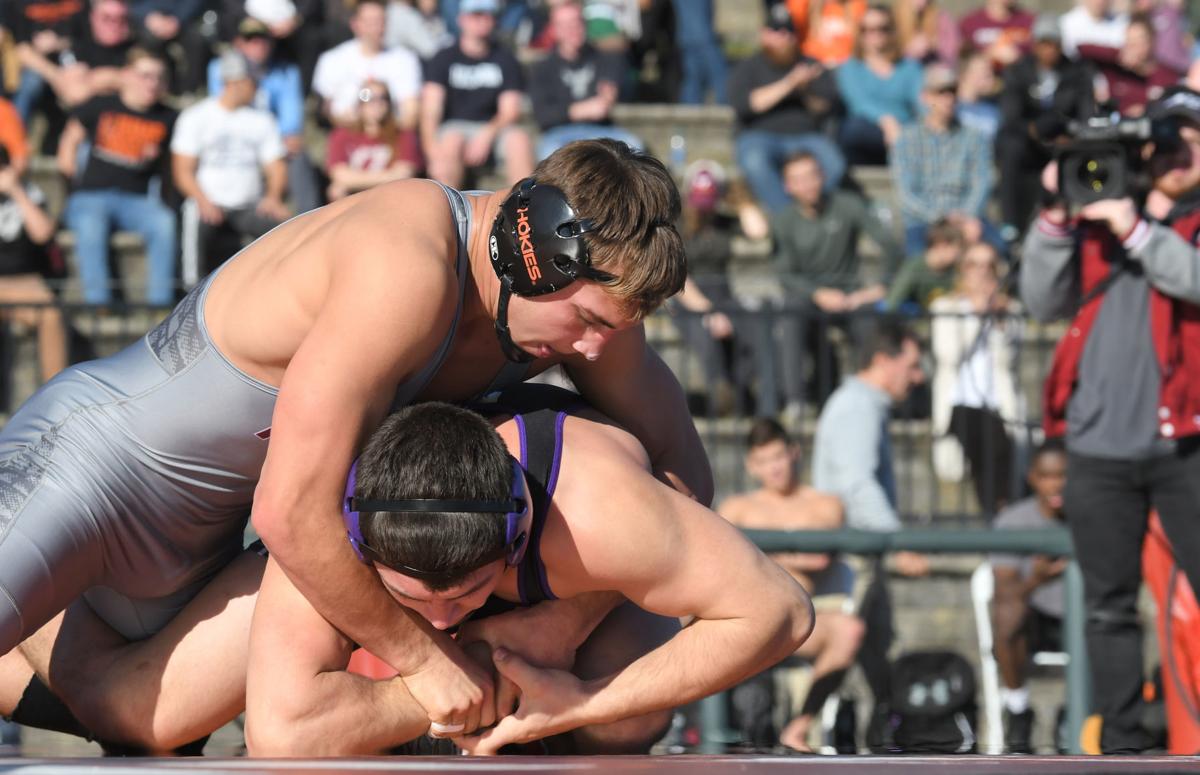 Virginia Tech third-year sophomore Hunter Bolen (top) grew up in Floyd County and took up wrestling when he was about 10 years old. 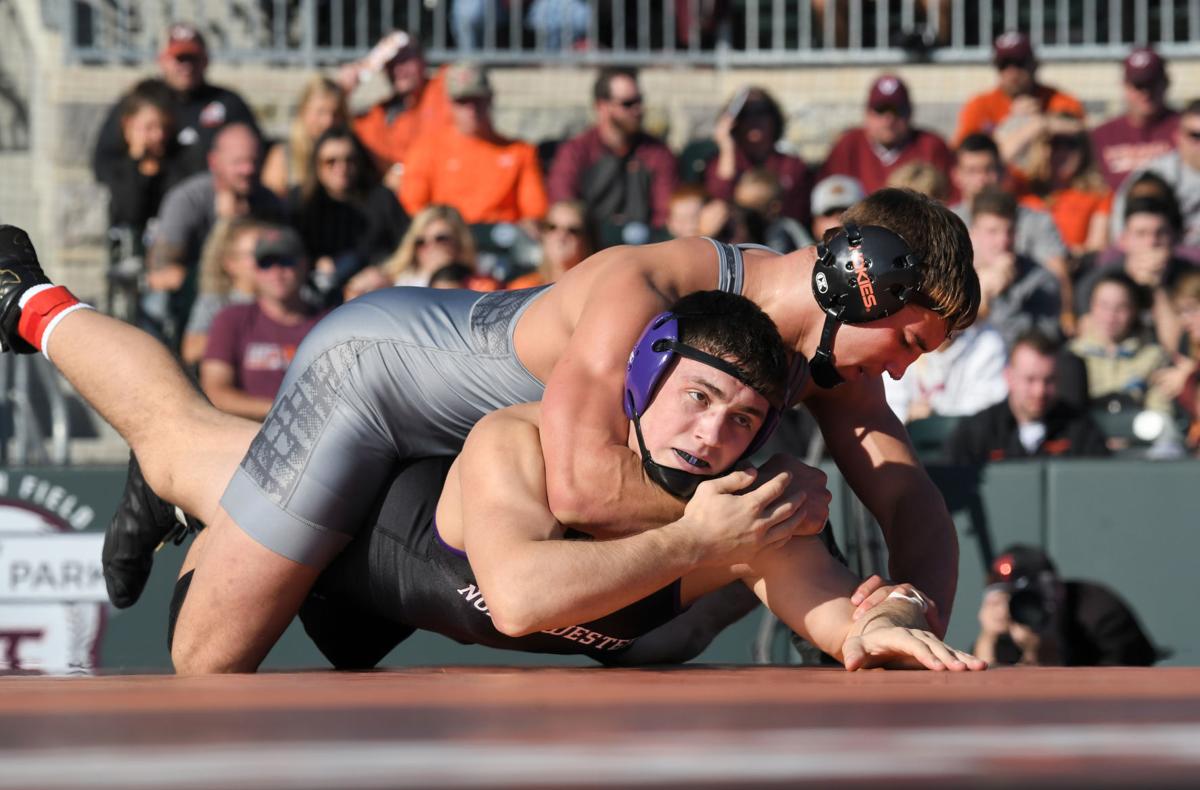 Virginia Tech third-year sophomore Hunter Bolen (top) is 19-1 on the season for the Hokies, who visit Virginia on Friday.

Virginia Tech third-year sophomore Hunter Bolen, who was a three-time state champ at Christiansburg High School, is ranked No. 2 in the nation at 184 pounds. Bolen is 9-0 in dual matches for the Hokies (8-1, 0-1 ACC) this season.

Virginia Tech third-year sophomore Hunter Bolen (right), who was named the Timesland wrestler of the year as a Christiansburg senior, is ranked No. 2 in the country at 184 pounds.

Virginia Tech third-year sophomore Hunter Bolen (top) is 19-1 this season at 184 pounds, including 9-0 in the team’s dual matches. His team is ranked No. 7 in the coaches poll.

Virginia Tech third-year sophomore Hunter Bolen (top) grew up in Floyd County and took up wrestling when he was about 10 years old.

Virginia Tech third-year sophomore Hunter Bolen (top) is 19-1 on the season for the Hokies, who visit Virginia on Friday.

For that, he has mulch to thank.

“Not really, no,” said Robie, whose seventh-ranked team will visit Virginia on Friday. “There’s a big variance. He’s at or near the top of the tough scale.”

Bolen, a third-year sophomore, credits his toughness to a chore he had as a kid. Bolen’s father, who co-owns a mulch company with Bolen’s uncle, would make an 8-year-old Bolen shovel mulch.

“We had a machine that colors mulch, and mulch would … build up around the spool that spins at the bottom of the conveyor, and he’d say, ‘All right, go down there and shovel mulch,’” Bolen said. “It was hard, and I’d sweat, and my back would be hurting at the end. But my dad would pay me afterward.

“He taught me how to work hard. And that’s what this sport’s mainly about, is working hard. If you don’t work hard, then it doesn’t matter how much talent you have.”

Bolen does work hard in the weight room and in the wrestling room. The result is a 19-1 record this season.

“He always had a good attitude about work,” said his father, Brett Bolen. “I could have cleaned some of [the mulch] up with a loader. But to be real honest with you, I wanted him to shovel it.”

Bolen, who has two older sisters, was the only boy in the family.

“I don’t really deer hunt anymore,” Bolen said. “Anybody can go out and shoot a deer with a gun. It’s kind of boring to me. I like hunting coyotes. That’s pretty difficult.”

Bolen’s biggest passion is fishing. He has his own jet boat, and likes to go out on the New River and fish for muskies.

“When he’s not doing school or wrestling practice, he’s out on the river or predator hunting,” his father said.

Bolen took up wrestling when he was about 10 years old, joining a club in Christiansburg.

“I always liked roughhousing with my dad,” he said.

Bolen grew up in Floyd County. Before he began the eighth grade, the family moved to a house in Christiansburg so he would eventually be able to wrestle for Christansburg High School’s powerhouse wrestling team.

A new address was not the only change in Bolen’s life at that time. He had been home schooled until the eighth grade.

Bolen became a three-time state champ at Christiansburg High School. As a senior, he also took home the 160-pound title in the prestigious Beast of the East tournament in Delaware.

He verbally committed to Virginia Tech the summer before his senior year, becoming the latest in a Christiansburg-to-Tech wrestling pipeline that has included such standouts as Devin Carter, Joey Dance and Zach Epperly.

“I really didn’t have interest in going anywhere else,” Bolen said.

At the time of Bolen’s commitment, Robie was an assistant to then-Tech coach Kevin Dresser.

“You could just tell he had it, that he was a tough guy,” Robie said. “He just has that mindset and that work ethic that can really set you apart at this level. Hunter’s always had that.”

Bolen’s parents moved back to Floyd County after he graduated from Christiansburg High. Bolen now lives in their Christiansburg house, along with a few of his teammates.

Bolen was named the ACC freshman of the year in 2018. He went 21-12 in the 174-pound weight class that season, including a loss in the final of his class at the ACC championships. He was one of only 16 true freshmen in the nation to advance that year to the NCAA championships, where he went 0-2.

But Robie (who was promoted to head coach in 2017) opted to redshirt Bolen last season.

“He didn’t want to redshirt, but it just made sense with what we had in our lineup at that particular time,” Robie said.

With Mekhi Lewis making his Tech debut at 165 pounds last season, All-American David McFadden was moving up to 174 pounds that year. All-American Zack Zavatsky, then a senior, was back at 184.

Lewis wound up becoming the first NCAA champ in the program’s history.

“[Bolen] wanted to be Virginia Tech’s first national champion,” Robie said. “The fact that Mekhi beat him to it, he was happy for him, but he also wanted to be the first.”

Bolen hit the weight room last season so he could succeed Zavatsky at 184 pounds this season. He also added moves in the wrestling room.

“I took that year to get better and develop and really hit the weights hard,” Bolen said. “The strength helps me finish a lot of takedowns.”

Bolen is 9-0 in dual matches for the Hokies (8-1, 0-1 ACC) this season. The lone loss in his 19-1 overall mark came in the Cliff Keen Invitational in Las Vegas, where Bolen wound up finishing third in a loaded field after losing in the quarterfinals.

Robie said Bolen is “light years” better than he was as a freshman.

“His offense on his feet has gotten significantly better,” Robie said. “His top game has gotten better. … That’s what separates him from a lot of people. He’s so effective from the top position.”

“He’s the guy that’s put in the time and the hours in the weight room and the wrestling room, working on his skills, grinding out hard workouts,” Robie said.

Bolen’s toughness enables him to do all those hard workouts.

“When you’re going through grueling workouts like we do, … there’s some pain involved,” Robie said. “Hunter handles that stuff well. He can push himself mentally and physically a lot further than some guys. And he can win matches on just sheer will and toughness.

“He has very good talent, too, but he also has those other components similar to Devin Carter and Jared Haught and some of the great guys that we’ve had here that had that same kind of will to win, desire to train and ability to push themselves beyond their physical limits.”

Bolen is not only ranked No. 2 at 184 pounds by Intermat but also by a panel of coaches whose final rankings will help determine the seedings for the NCAAs in March. The top-ranked wrestler at 184 is Arizona State’s Zahid Valencia, who won the NCAA crown at 174 the past two years.

Bolen is determined to win the NCAA title this year.

“I’m not really worried about other people,” he said. “Just focus on yourself.

Bolen is a communications major, but he plans to go into a different field when he graduates.

He intends to join the family mulch business.

At Christiansburg High School: three-time state champ; Beast of the East champ and Timesland wrestler of the year as a senior; 138-8 career mark.