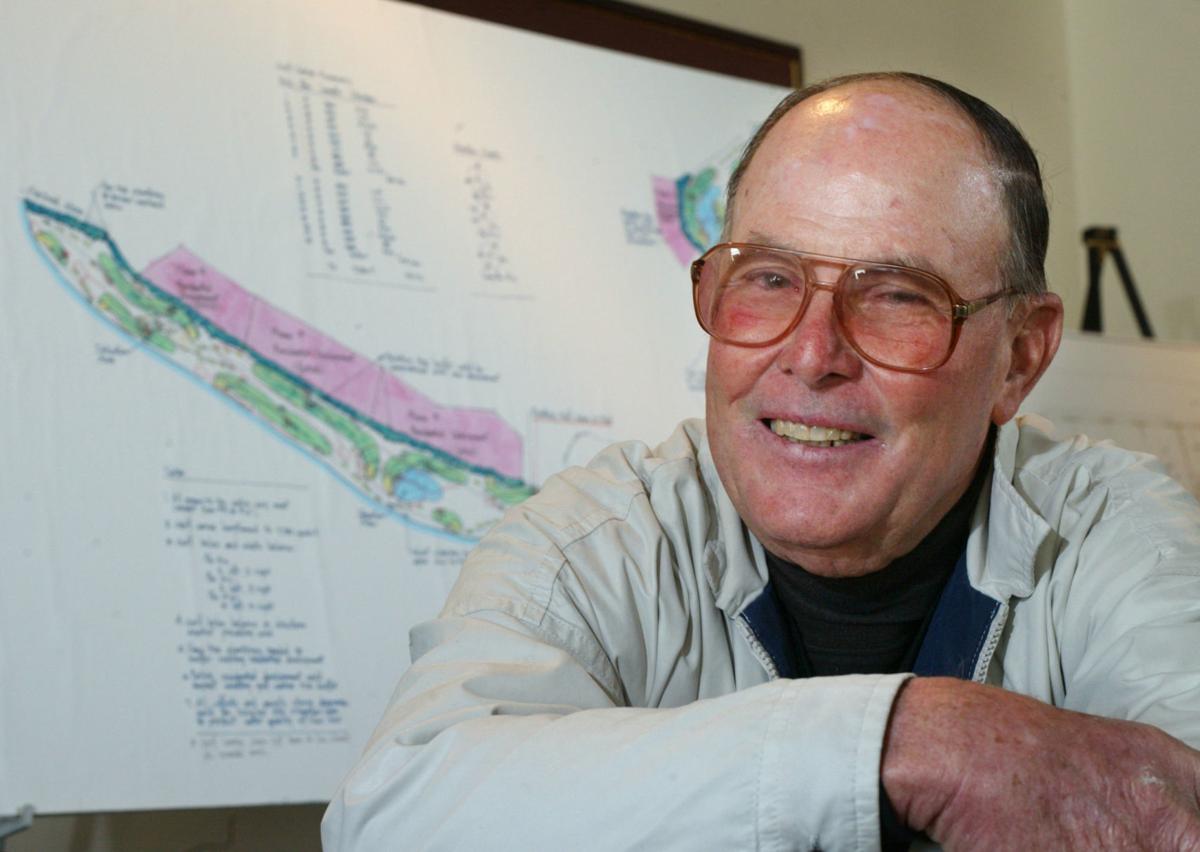 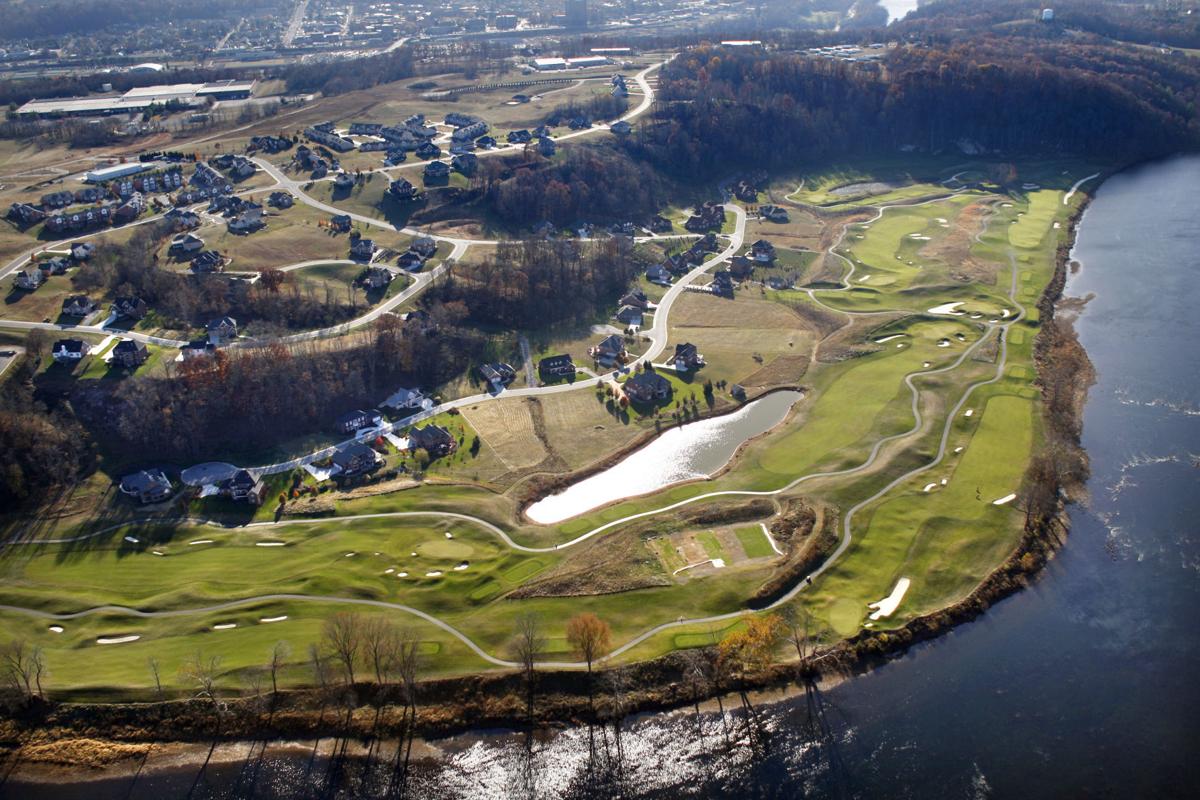 After renovation, The Pete Dye River Course of Virginia Tech in Fairlawn was dedicated in a June 2006 ceremony. 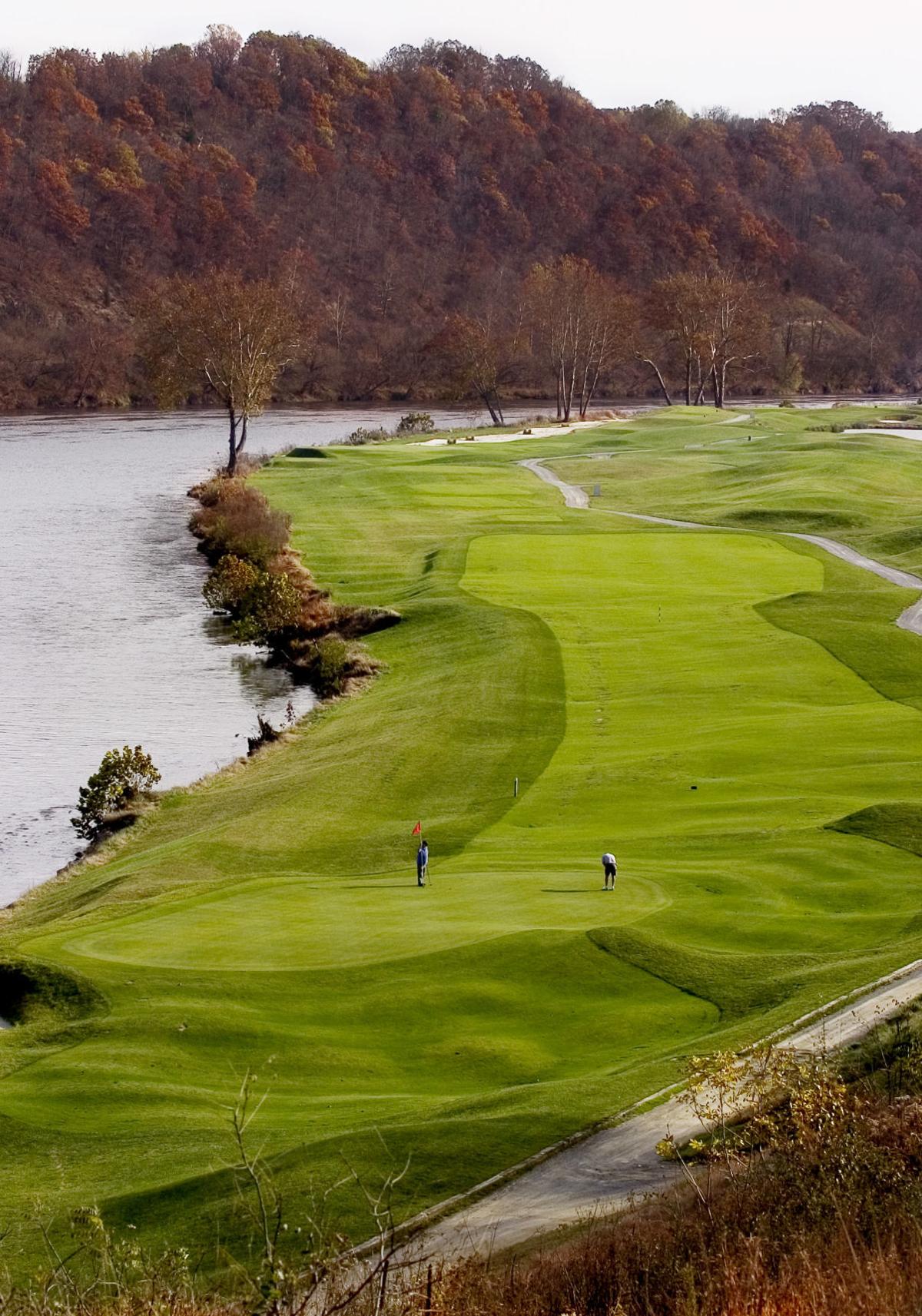 The 18th hole of the Pete Dye River Course of Virginia Tech runs along the New River capturing the ambience Dye himself favored.

After renovation, The Pete Dye River Course of Virginia Tech in Fairlawn was dedicated in a June 2006 ceremony.

The 18th hole of the Pete Dye River Course of Virginia Tech runs along the New River capturing the ambience Dye himself favored.

But he also left his mark on a course in Pulaski County.

The Pete Dye River Course of Virginia Tech was named after Dye in 2006 after he redesigned that course.

Dye died Thursday at the age of 94.

“What a wonderful spirit,” John Norton, the former head golf pro and general manager of the Pete Dye River Course of Virginia Tech, said Friday in a phone interview. “It was a very sad day for me.”

Virginia Tech announced in December 2003 that it had hired Dye to renovate what was then known as The River Course of Virginia Tech. The school had acquired the Fairlawn course earlier that year.

Tech graduate Bill Goodwin, who was a friend of Dye, had asked Dye to redesign the course. Goodwin and his wife donated $3-4 million to cover the design and construction costs.

“Bill Goodwin called Pete and said, ‘We’re trying to get into the ACC,’ ” said Norton, who retired two months ago after working at the course for 15 years. “Bill being the golfer that he was and owning a bunch of Pete facilities, he wanted to make sure that Virginia Tech would have a championship-caliber facility.

“He called Pete and he said to Pete, ‘Meet me in Blacksburg.’ Pete said, ‘Blacksburg where?’ ”

Dye visited the course for two days to decide if he wanted to take on the rebuilding project.

“We walked the golf course forwards, backwards and sideways [during Dye’s initial visit],” said David Lowe, who was the chairman of the board of the course at the time. “Every time the train would go by on the opposite side of the river, Pete would just stop and sort of stand in a mesmerized stance at the beauty … of the setting.”

Lowe dealt with Dye quite a bit during the course of the renovation.

“Pete was a pretty independent guy,” Lowe said. “He did what Pete wanted to do and we supported him.

“For any organization anyplace to have a man of his stature putting his name and design on a golf course was very special.”

Dye was 78 when he visited Tech in January 2004 for a groundbreaking ceremony that wound up being scratched in favor of a Lane Stadium gathering because of the weather.

“You’ve got the oldest river and the oldest golf designer,” Dye joked at the time.

The course lies on the bank of the New River.

“This place has got the ambience and the qualities that make a golf course really good,” Dye said in 2004. “The river is just pristine. … We’re really blessed with the abundance of what’s there — the river and the scenery is unbelievable.”

Dye announced in 2004 that he would modify all 18 holes and greens; add bunkers and trees; install new grass; and lengthen the layout.

“There was a lot more land they had that they could have used, so we used every inch of it [in the new design],” Dye said in 2004. “To make this thing a great golf course for intercollegiate [play], you’ve got to go all the way out, but you’ve got to get Joe Q. Public around the golf course, too. And you can do that when you have enough land.”

Norton, who began his job at the course in November 2004, would pick Dye up at the New River Valley Airport when Dye made monthly visits to inspect the work site.

Despite his age, Dye never used a golf cart on those visits.

“He always walked down the fairway,” Norton said. “He’d walk all 18 holes.”

Norton recalled the time Dye saw the No. 3 green from the middle of the fairway of the second hole. Dye disapproved, and ordered a mound of dirt raised.

“When you’re playing a golf hole, Pete always felt like you didn’t want to see other golf holes,” Norton said. “The whole time they were there, … he was building mounds between the holes. He moved about 500,000 square yards of earth to do that. … When you play the River Course, you play all those golf holes and you don’t see other golf holes.”

Dye’s late wife, Alice, often accompanied him on those visits, along with their dog.

“It’s probably one of his fairer golf courses. … Lots of Pete golf courses, you had to fly it 200 yards in order to get it over the water or that kind of thing,” Norton said.

The renovated course debuted in August 2005. Dye’s design featured five sets of tees, ranging from 5,142 yards for women to 7,665 for tournament play. A sixth set was later added.

“Because it’s down there on the river, it’s really a links course in the middle of Southwest Virginia.

“We had people out there shooting in the 100s. … So we created a sign that basically said, ‘Please play the set of tees that best reflect your handicap.’ ”

The course was renamed the Pete Dye River Course of Virginia Tech at a June 2006 dedication ceremony. Dye returned for that ceremony.

“It’s always fun to have you here before you play. Because I might be the biggest you-know-what in about three or four hours,” Dye said in 2006.

Dye said the land was “one of the top five pieces of property I’ve ever worked with.”

“I’ve never had anything better than this piece of ground as far as the ambience of the golf course,” Dye said in 2006. “The river makes this place.”