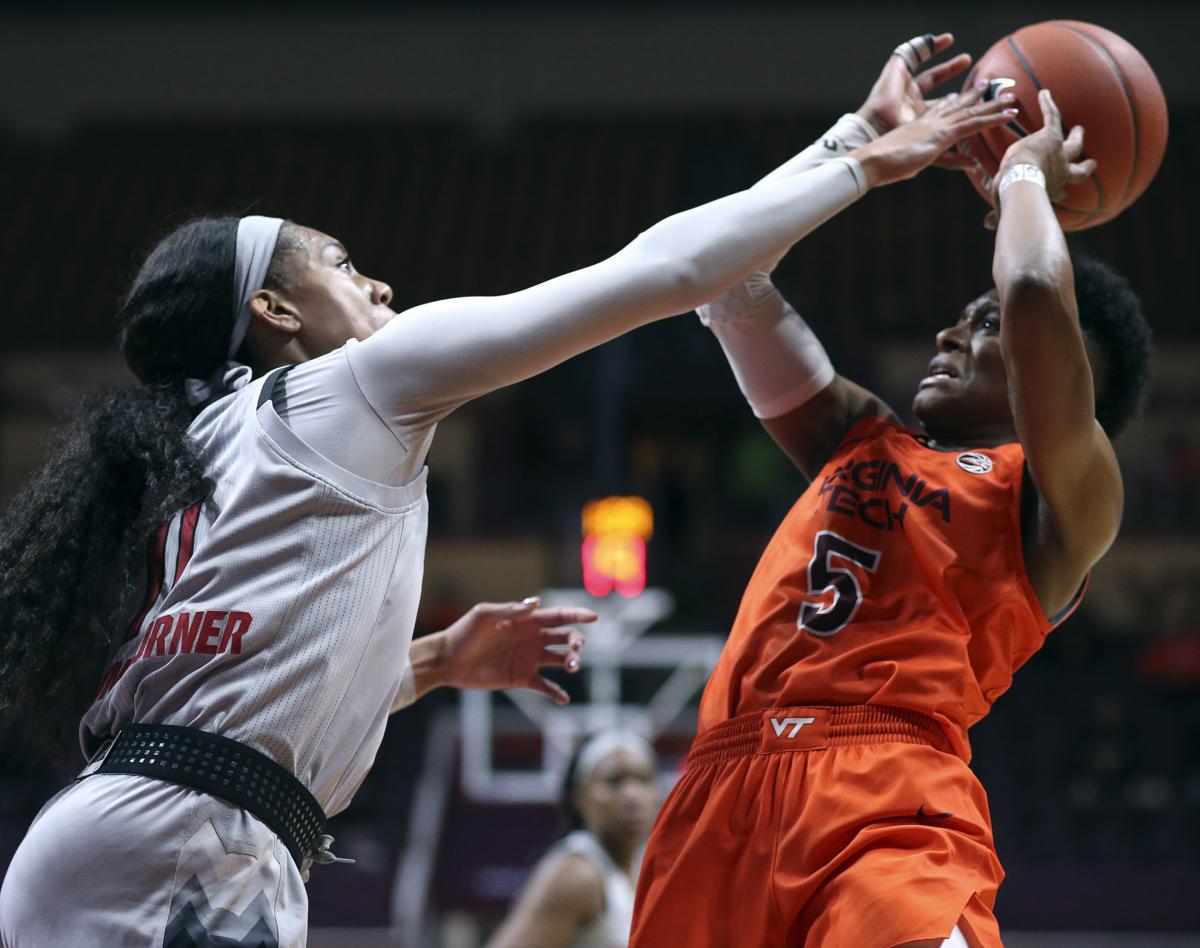 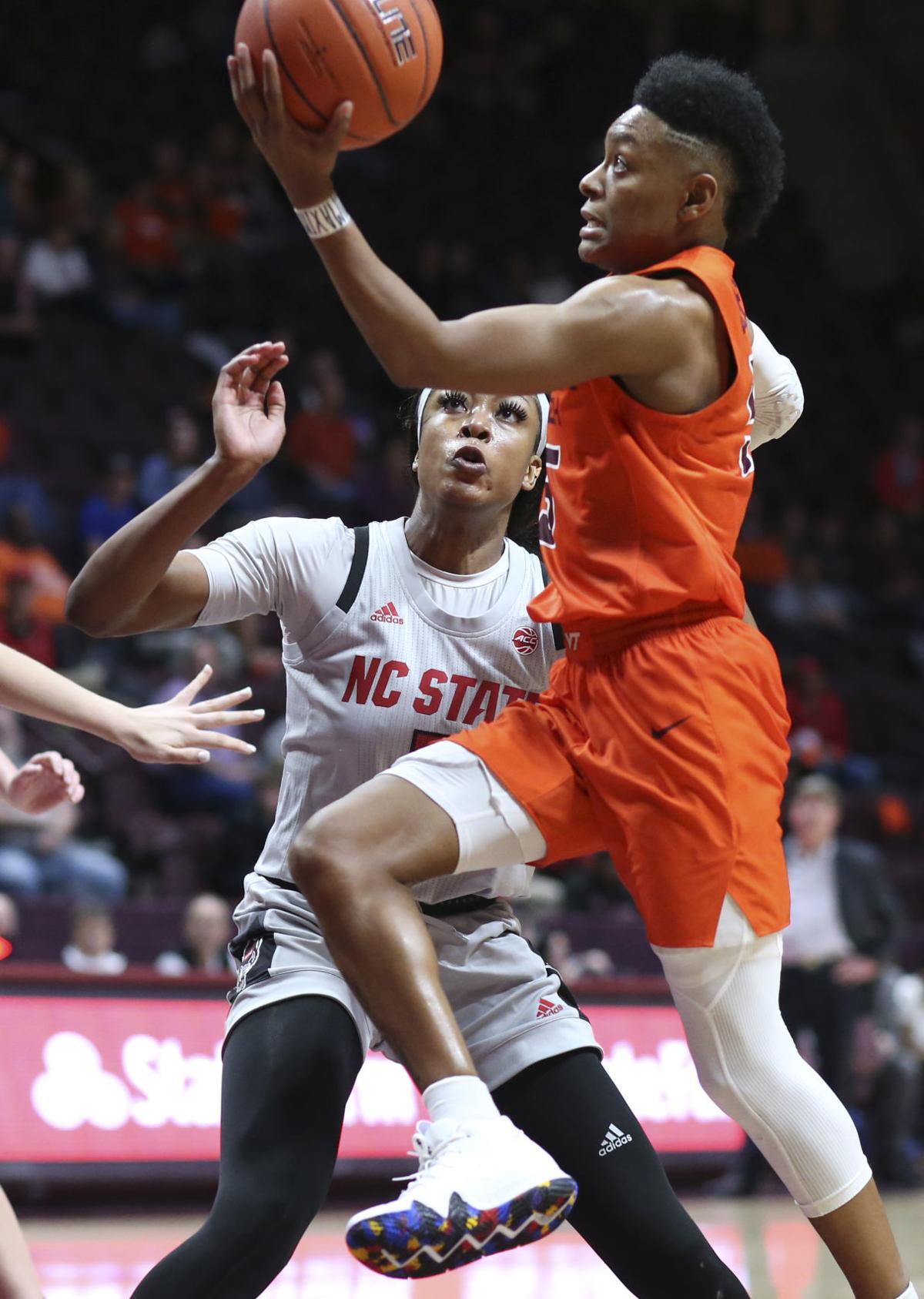 Taja Cole (right) of Virginia Tech drives towards the basket past Jada Boyd of North Carolina State. Cole had 19 points.

Taja Cole (right) of Virginia Tech drives towards the basket past Jada Boyd of North Carolina State. Cole had 19 points.

BLACKSBURG — The North Carolina State women’s basketball team showed Thursday why it boasts one of the stingier defenses in the nation.

Seventh-ranked N.C. State beat Virginia Tech for the second time in as many months, winning 71-59 at Cassell Coliseum.

“We didn’t answer the bell,” Hokies coach Kenny Brooks said. “We allowed ourselves to be played a certain way, and we’ve got to learn to play through it and be more of the aggressor.

“Wasn’t one of our better performances. I just thought we were very stagnant. We didn’t move the ball like we were supposed to.

“It’s a disappointing loss. We know we didn’t play well.”

“They did a good job of taking us out of some of the things that we were accustomed to doing,” said Brooks, whose team fell to 0-3 against top-10 foes this season. “They disrupted our rhythm. … Weren’t able to get the ball to our sweet spots like we really wanted to.”

State also held Tech to its fewest points in an ACC game this season, as well as its fewest 3-pointers (five) in ACC play this season.

“They sat on top of the guards, so obviously that delays your offense and you just kind of have to find a way to get open,” said Tech guard Dara Mabrey, who had 15 points and two 3-pointers. “We just have to continue to find other ways to get to the basket and get each other open because obviously it’s going to be a pattern; they’re going to try to sit on top of the shooters.”

“Our kids did a pretty good job of avoiding some picks and getting over some picks … to get to them,” State coach Wes Moore said.

The Wolfpack led for the final three quarters, although its lead shrunk to one point in the third quarter.

“We have to be better towards the end of the game,” said Tech point guard Taja Cole, who had 19 points. “We cut it down to one and we didn’t finish.”

Tech scored 10 points less than it did in last month’s meeting.

“There’s no secret. We’ve played each other already, and you know who does what really well,” said Moore, whose team won its eighth straight game.

“We did a pretty good job of trying to stay between them and the rim and make it tough for them to score over you,” Moore said.

State sophomore Elissa Cunane, a 6-foot-5 center who made the Wooden Award Late Season Top 20 watch list Monday, had 17 points and 16 rebounds. She was just 4 of 15 from the field but was 8 of 10 from the free-throw line.

“She gets a good whistle,” Brooks said. “That’s all I’ll say about that.”

“We pushed it in transition, pulled it out, ran our offense,” Mabrey said.

“Ran out of gas a little,” Brooks said.

State was 17 of 22 from the free-throw line in the fourth quarter.

N.C. State improved to 21-1 in the series. The Wolfpack beat Tech for the sixth straight time.

The Hokies saw their 16-game home winning streak come to an end. It was their first home loss since last February.