Georgia Tech guard Bubba Parham, shown going after a loose ball, is in his first season with the Yellow Jackets after previously starring at VMI. 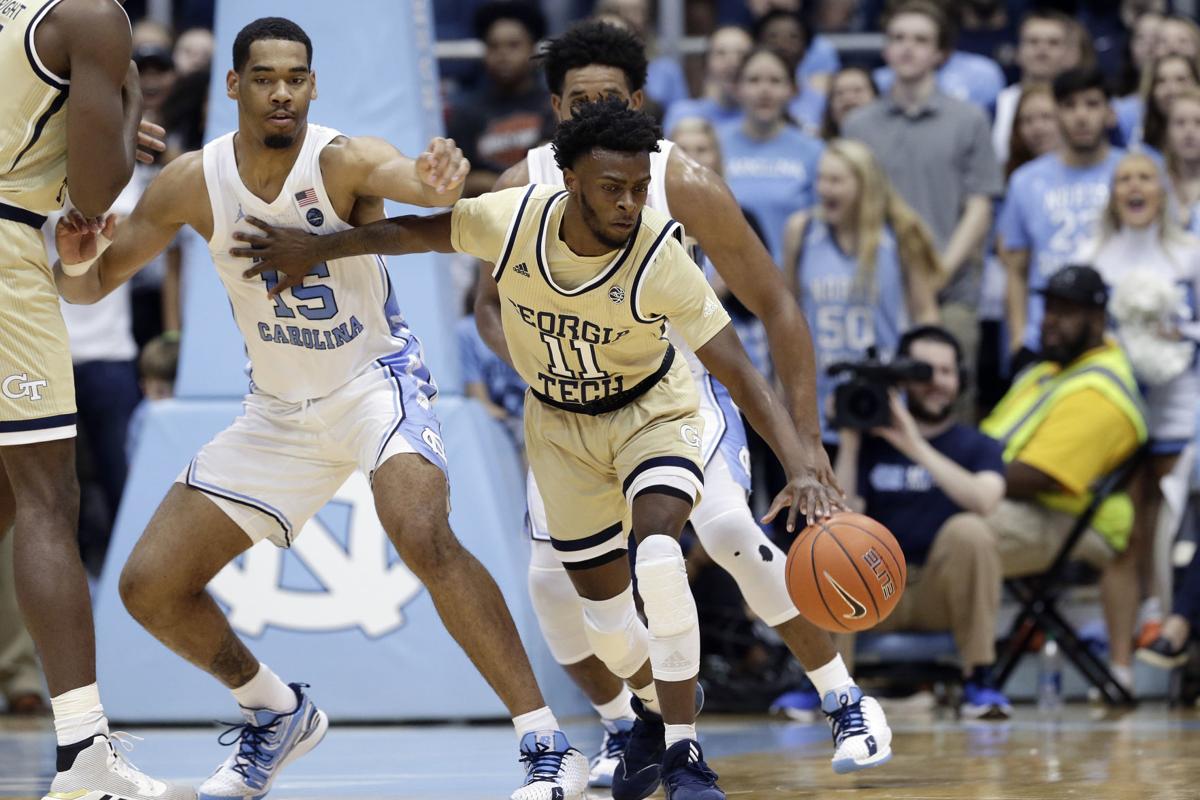 Georgia Tech guard Bubba Parham (11), a former VMI standout, has dished out 39 assists and has made 21 3-pointers this season.

Georgia Tech guard Bubba Parham, who is only 5-foot-10, ranks fifth on the Yellow Jackets in minutes this season. He played for VMI the past two seasons.

Georgia Tech guard Bubba Parham, shown going after a loose ball, is in his first season with the Yellow Jackets after previously starring at VMI.

Georgia Tech guard Bubba Parham (11), a former VMI standout, has dished out 39 assists and has made 21 3-pointers this season.

Georgia Tech guard Bubba Parham, who is only 5-foot-10, ranks fifth on the Yellow Jackets in minutes this season. He played for VMI the past two seasons.

For the second straight season, Bubba Parham will be facing the Virginia Tech men’s basketball team.

But this time, he won’t be wearing a VMI uniform.

Parham plays in the ACC now, for Georgia Tech.

“I’m liking it a lot,” Parham said in a recent phone interview. “It’s a different situation for me, but it’s all going to make me a better player and a better person and having a better education.”

The junior guard comes off the bench for the Yellow Jackets (10-12, 4-7), who will host Virginia Tech on Tuesday. But he ranks fifth on his new team in minutes (27.7 mpg), and played 36 minutes in last weekend’s loss at Notre Dame.

“If I put myself up against the player I was at VMI, the player I am now would definitely kill the player that I was at VMI,” Parham said. “I’m a much smarter player, much [more] versatile player now. I can pass a lot better. I see the game a lot easier. The game has slowed down for me.”

Parham led the Southern Conference in scoring last year with an average of 21.4 points. He tied for second in the league in 3-pointers (3.6 per game) and tied for sixth in assists (3.5 apg), earning All-SoCon second team honors.

He ranks seventh on the Yellow Jackets this season with an average of 5.7 points.

The 5-foot-10, 160-pound Parham has scored in double figures five times this season. He scored 11 points against both Syracuse and North Carolina. He tallied 10 points against Georgia, Arkansas and Kentucky.

“This year is an adjustment … for him, going from VMI to Georgia Tech and the size of the guards he’s playing night in and night out,” Georgia Tech coach Josh Pastner said. “But he’s doing a really nice job.”

“Adjusting to the fact of not being able to shoot 15 or 20 shots a game, that was the toughest part for me at first,” Parham said. “But I’ve kind of accepted my role.”

Parham — whose first name is Donald — is from the Atlanta suburb of Snellville, Georgia. He was not offered a VMI scholarship until the spring of his senior year of high school.

“A lot of people look at Bubba and say ‘OK, he’s a little slight,’ meaning he’s not the tallest guy, he doesn’t weigh a ton,” VMI coach Dan Earl said. “A lot of people overlook guys like that. But we saw him and thought he can make shots, certainly, and he’s also very shifty.

“Plus he understood the game maybe even better than I originally thought.”

Parham was named the SoCon freshman of the year after averaging 14.6 points in the 2017-18 season.

Last season, he scored at least 30 points in nine games. He made a VMI-record 10 3-pointers and finished with 35 points in the Keydets’ loss at Kentucky last season.

He had 30 points and seven 3-pointers in a loss last February at SoCon rival Wofford, which was steered by current Hokies coach Mike Young. It was one of five meetings between Wofford and VMI the past two years.

“I saw him more than I care to see him,” Young said. “I know him as a really, really good scorer, maybe not getting all the way to the rim but [has the] … ability to shoot from deep and blow your doors off.

Does Parham miss being the big scorer he was at VMI?

“Yeah, I scored big, but we also lost a lot,” Parham said. “So it’s a lot funner after games, no matter if I score 30 or if I score five.

“It was a lot of fun doing that [scoring] when we won, but scoring 30 and losing doesn’t accomplish anything.”

“I just had some family issues back home that needed my attention,” Parham said. “Transferring to Georgia Tech, I’m not even an hour away from home, so I can get home when I need to. [And] I’m playing in the ACC and getting a great education, so it’s the best of both worlds.”

Last September, the NCAA granted him a waiver so he could play this season without having to sit out a year.

“My grandmother has dementia. …That’s the main reason why I got the waiver, because my grandma has basically been … in my immediate household … since I was born,” he said.

“And my dad got a little sick, but he’s doing a lot better now.”

Parham said he tries to get home at least three times a week.

“Last game [at Notre Dame], he played 30-plus minutes and didn’t have a turnover,” Pastner said. “Now he didn’t score a lot [he had three points], and that’s obviously a change from where he was to where he is now, but he’s doing what we need.

“He’s getting better and better and better. The biggest thing for him is to continue to understand how important 50-50 balls are. … He’s got to make up for things because of his size, just with hustle plays.”

Parham said the size disparity can be a plus.

“I’m a lot quicker than the bigger guys I’m playing against,” he said.

“At VMI, there was a lot of help defense. People would sag off [others to double-team him]. And now I can get to my spots a lot easier.”

Parham said he misses his former VMI coaches and teammates.

“That was my family when I was there,” he said. “I love each and every one of them.

“[But] as far as basketball, I think I’m in a better space now here.”

As VMI freshman: SoCon freshman of the year; averaged 14.6 points.

Notes: Georgia Tech guard Michael Devoe (16.2 ppg) has missed the past three games with a foot injury. He is questionable to doubtful for Tuesday's game, said Georgia Tech coach Josh Pastner. … The Hokies are on a three-game skid, including road losses to Boston College and Miami. … This game will begin a stretch of four straight games against teams with losing ACC records (including rematches with BC and Miami), but Hokies coach Mike Young finds no solace in that fact. "We had two of them [recently] … and it didn't work out very well," Young cracked. "So we better get our ass in gear." … While Virginia Tech has the most 3-point attempts in the ACC (610), Georgia Tech has the fewest (380). "We try to score in the paint," Pastner said. … Young's Wofford team beat the Yellow Jackets in December 2017.