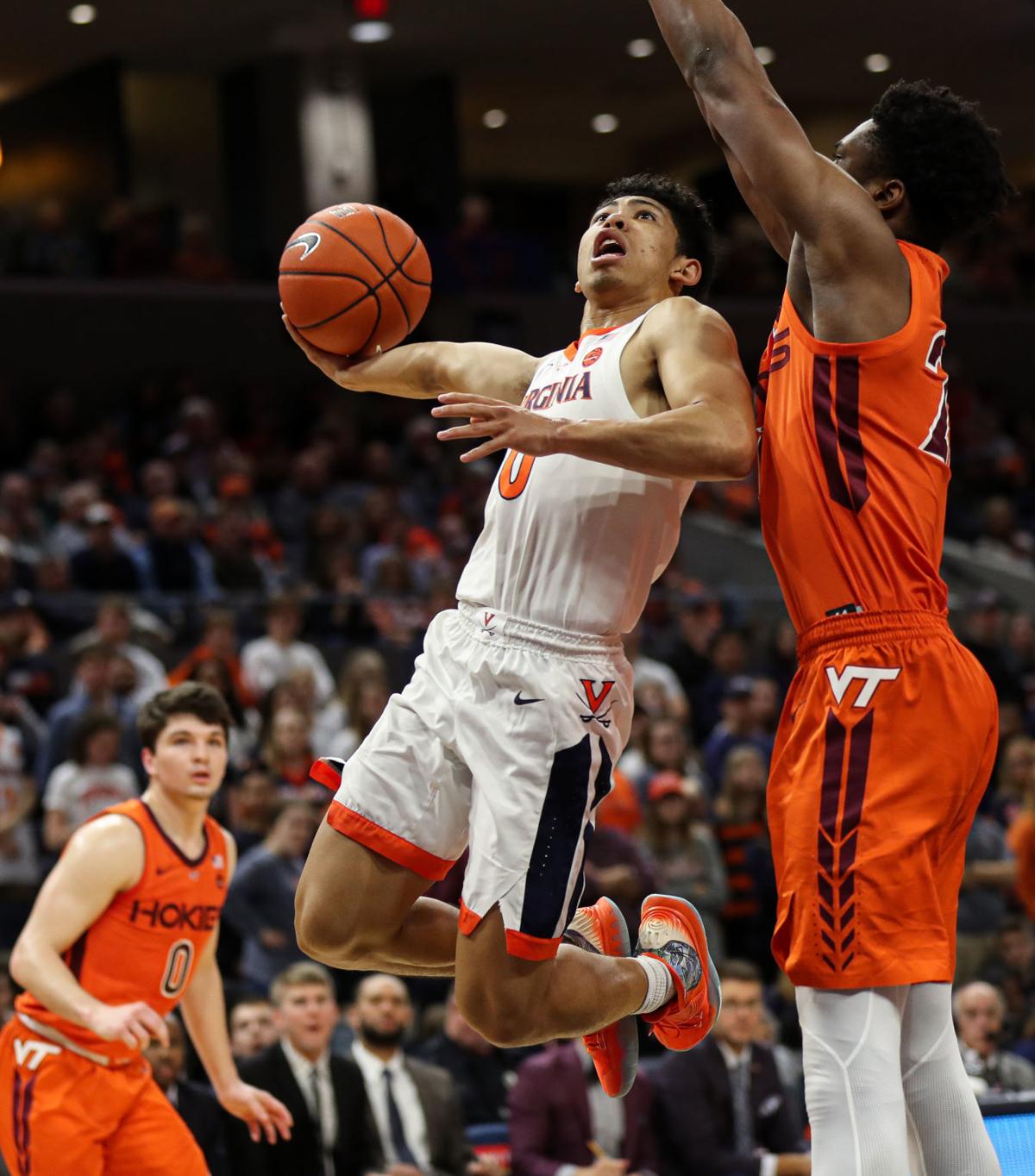 UVa’s Kihei Clark (center) goes up to the basket over Virginia Tech’s Tyrece Radford in the first half of a game on Saturday in Charlottesville. UVa won 65-39. 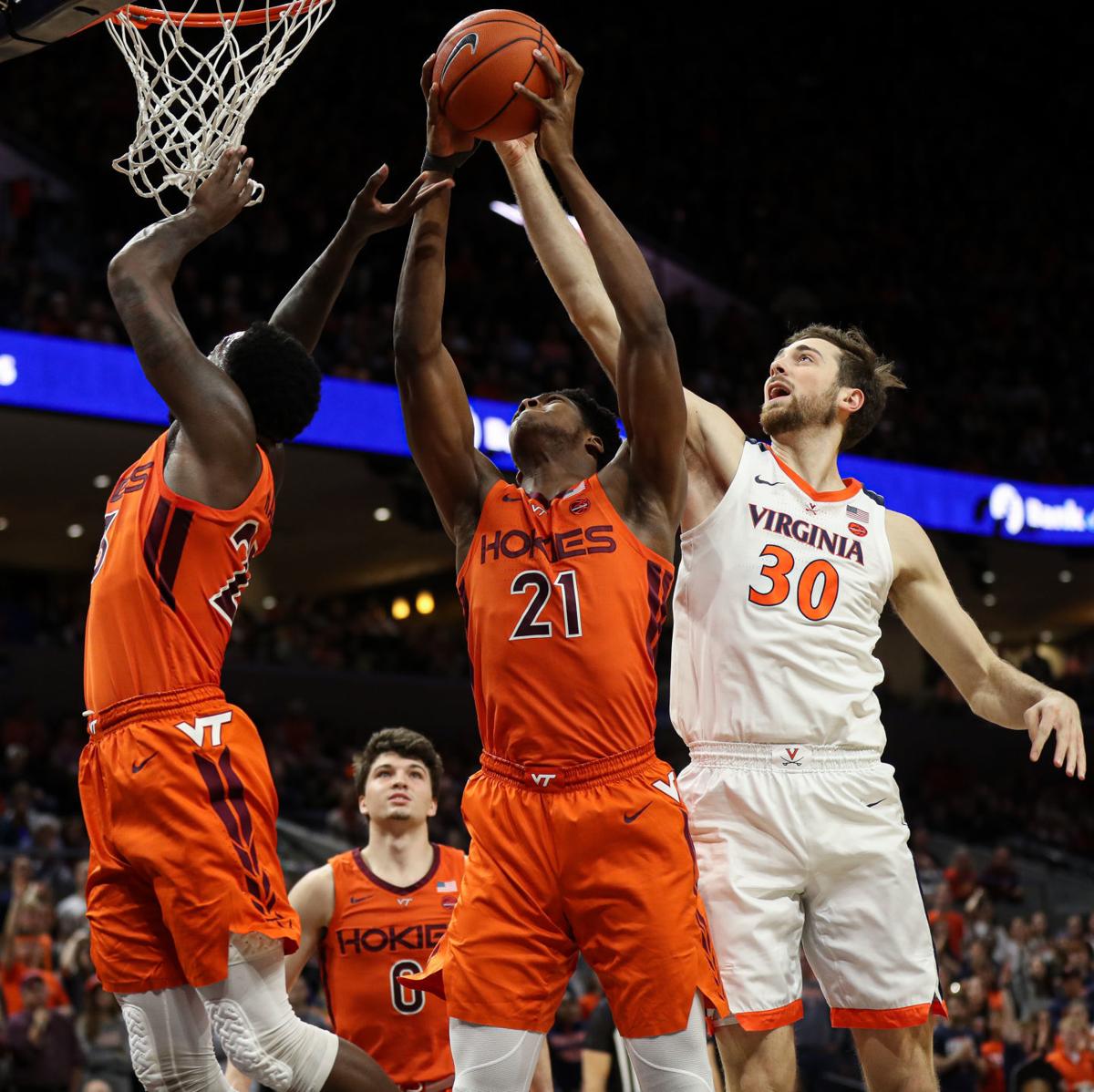 Virginia Tech’s John Ojiako (center) competes for a rebound with UVa’s Jay Huff (right) in the first half of a game in Charlottesville on Saturday.

UVa’s Kihei Clark (center) goes up to the basket over Virginia Tech’s Tyrece Radford in the first half of a game on Saturday in Charlottesville. UVa won 65-39.

Virginia Tech’s John Ojiako (center) competes for a rebound with UVa’s Jay Huff (right) in the first half of a game in Charlottesville on Saturday.

CHARLOTTESVILLE — Before his first visit to John Paul Jones Arena as the Virginia Tech men’s basketball coach, Mike Young could have seen a ray of hope.

Tech’s host was a Virginia team coming off a national championship, but the Cavaliers already had lost twice this season and were a mere 6½-point favorite Saturday.

The Hokies only wished it were that close as 19th-ranked UVa raced to a 15-point first-half lead and was scarcely threatened in a 65-39 romp.

The Cavaliers’ sophomore point guard, Kihei Clark, finished with a career-high 18 points and six assists, matching Tech’s assist total as a team. UVa senior Braxton Key also had 18 points, part of a double-double that included 10 rebounds, including nine at the defensive end.

“That was a big concern,” said UVa coach Tony Bennett, speaking of Tech’s 39.4% 3-point shooting before Saturday. “We were locked in. Did they miss some open shots? Yes. But, did we make them shoot contested shots the majority of the time. Yes.

“I thought we first got our defense set and did all the things that needed to happen for us to be effective defensively against a team that is dangerous [offensively]. I thought our guys came ready to go.”

Tech didn’t hit the double-figure mark as a team until 3:41 remained in the first half.

“As good as they are defensively, I thought that they were just exceptional today and beat us to some things,” Tech coach Mike Young said. “So tip of the cap to those guys. They’ve got another very nice outfit.”

The Hokies, who entered the game with a 211-123 assist turnover ratio for the season, had six assists and 13 turnovers Saturday.

“That’s not Virginia Tech numbers, certainly,” Young said. “It would be less than fair not to credit Virginia and their preparedness and their team’s activity on the defensive end.”

Whatever problems the Cavaliers were having with Nolley in the first half, it’s clear they were addressed at halftime. He was 1 for 6 from the field after intermission.

Key credited Sam Hauser, a high-scoring transfer from Marquette who is ineligible this season, for filling the Nolley role in practice.

In addition to Clark and Key, Virginia had a third double-figure scorer in Kody Stattmann, a 6-foot-7 sophomore who made his second career start against an ACC opponent. He finished with 10 points and eight rebounds, career highs in both categories.

“Last year, coming in, it was very foreign to him,” said Bennett, who was referring to the Cavaliers’ defensive orientation rather than Stattmann’s Australian heritage. “He wasn’t able to slide as well, but he is 6-7 and he’s bouncy and has the ability to bother some shots.

“It’s such a new experience for him. He hardly played last year. We were almost going to redshirt him but we didn’t. To go against a small [Hokies] team, we had maybe our best defensive lineup on the floor.”

The availability of Key, who underwent surgery in November after sustaining an injury to his left (non-shooting) wrist, has been important for a Cavaliers’ team that already was down three players who had turned pro after last spring’s NCAA Tournament run.

“It’s a lot lighter and I have more access to my palm,” said Key, now playing with a splint instead of a cast. “Catching and shooting feels a lot better. Today, I felt a lot more comfortable. Less padding, less tape, it felt great.”

CHARLOTTESVILLE — Through the first two months of the season, the Virginia Tech men’s basketball team had developed a reputation for making a …