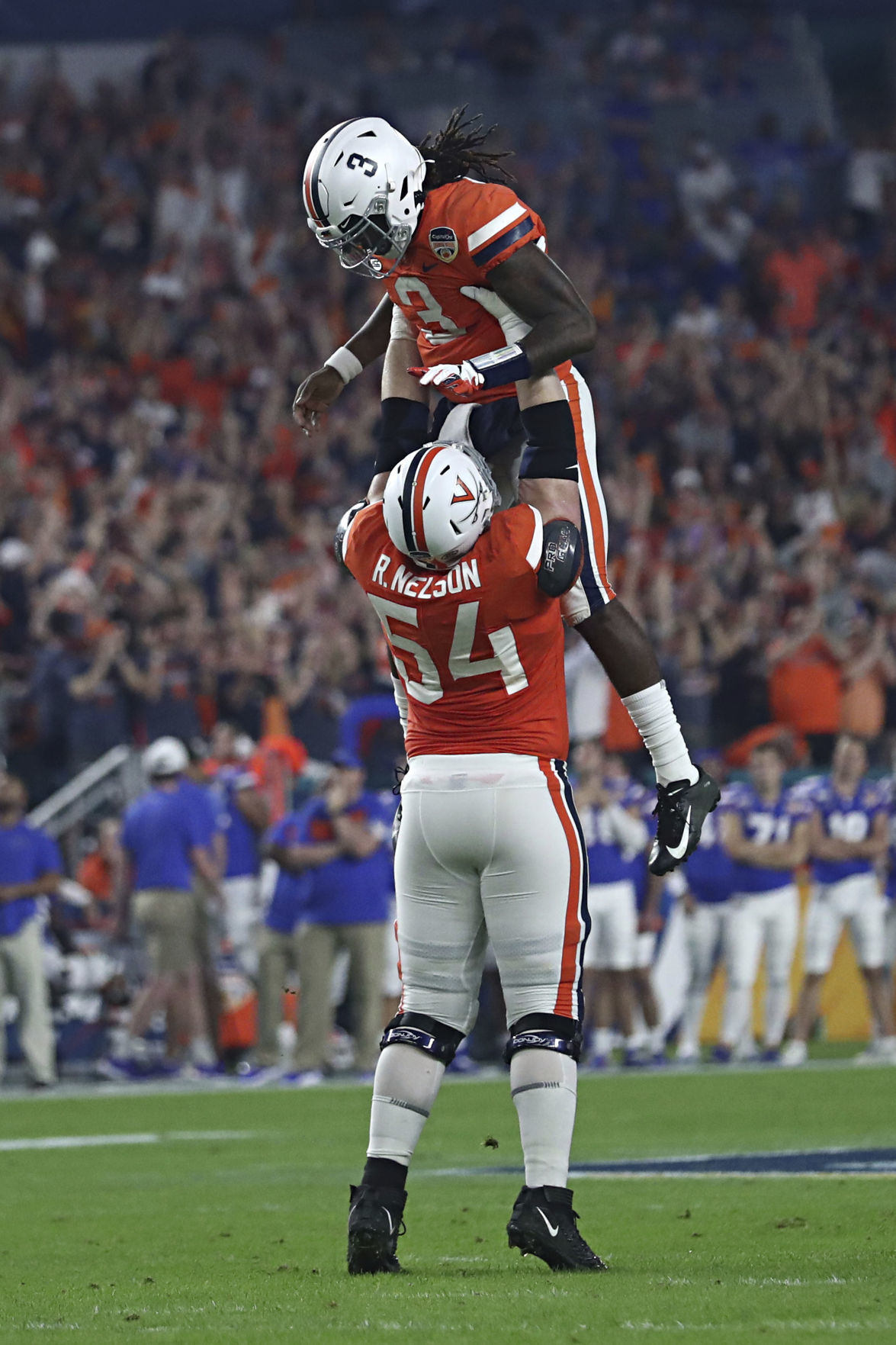 MIAMI GARDENS — For anybody who wondered what Virginia was doing in one of the traditional New Year’s bowl games, quarterback Bryce Perkins alone was worth the invitation.

Perkins passed for 323 yards and four touchdowns, but it wasn’t enough as the Cavaliers fell to Florida 36-28 in the Orange Bowl at Hard Rock Stadium.

The game was not as close as the final score indicated, with Virginia scoring its final touchdown on a 2-yard pass from Perkins to fellow senior Hasise Dubois with 38 seconds remaining.

“He made our jobs a lot harder, so hats off to him,” said Jonathan Greenard, a Florida linebacker who had one of the Gators’ five sacks. “But, hey, we got a ‘W,’ so we ain’t got to worry about him no more.”

The Cavaliers had entered the game as a 16-point underdog against ninth-ranked Florida (11-2).

Only 40 seconds elapsed before Florida scored its first touchdown on a 61-yard run by senior running back Lamical Perine, who finished with 13 carries for 139 yards and two touchdowns. He had rushed for a total of 47 yards in Florida’s previous three games.

Perine also caught five passes for 43 yards, including a 16-yarder from quarterback Kyle Trask, who was 24 of 39 for 305 yards.

“You look at every time we needed a big run during the season,” Florida coach Dan Mullen said.”He came up with a lot of big runs.”

Virginia never had a lead all night but was still in the game at 27-21 following a 7-yard pass from Perkins to Joe Reed with 13:05 remaining.

The Gators finished with 549 yards in total offense against a UVa team that was without two seniors who had been the rocks of the Cavaliers’ defense, co-captains Bryce Hall, a cornerback, and linebacker Jordan Mack.

In an odd twist, Hall had suffered a fractured ankle when UVa visited Hard Rock Stadium to play Miami in late September. Hall required surgery and did not play again, and Mack later underwent surgery after lacking the mobility to play more than a few early snaps in the ACC championship game.

The Cavaliers lost that game 62-17 and had given up 27 points or more in six straight games coming into the Orange Bowl.

It looked like more of the same when Florida jumped to a 24-10 halftime lead.

“The defense today gave us a great chance, all the way to an onside kick, to win the game,” said UVa coach Bronco Mendenhall, whose charges were unable to come up with the ball with 38 seconds left. “It wasn’t quite enough.”

Dubois finished with 10 catches for 83 yards and two touchdowns, in the process becoming the fourth player in program history to finish his career with at least 1,000 receiving yards.

“Any time I’m outside the pocket, I try to find Has,” Perkins said.

“Like [coach Mendenhall] said, his ability to catch the ball in traffic is unmatched and by far the best I’ve ever seen.

Dubois and his offensive teammates were also complimentary of their defensive counterparts, who kept things manageable on the scoreboard, despite all of the offensive weapons available to the Gators.

“The defense balled out; the offense balled out and we played our hardest,” Dubois said. “I feel like this [UVa] team has grown a lot from game one, regardless of the injuries. Next year’s team is going to be a force to be reckoned with.”

Virginia certainly will miss Perkins, a junior-college transfer who needed only two years to break the UVa record for total offense in a career.

1. Protect against the long ball: B

Florida had a 61-yard pass completions but it's only passing TD was a 19-yarder.

2. Dare the Gators to Run the ball: D

Florida rushed for 244 yards, more than double its regular-season average. If there was any dare, it backfired on the Cavaliers.

An interception by UVa's Nick Grant on Florida's second series was the only turnover by any team.