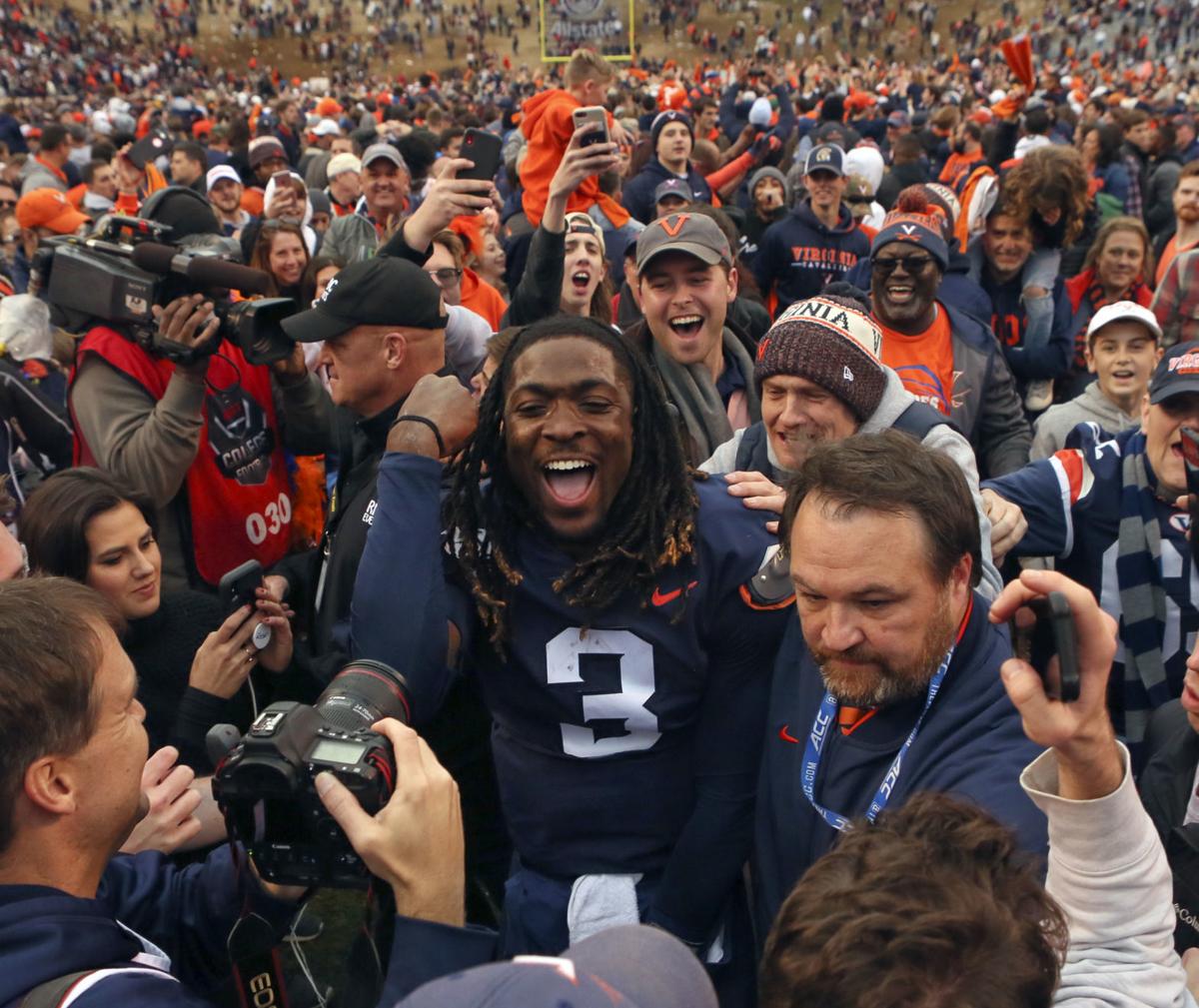 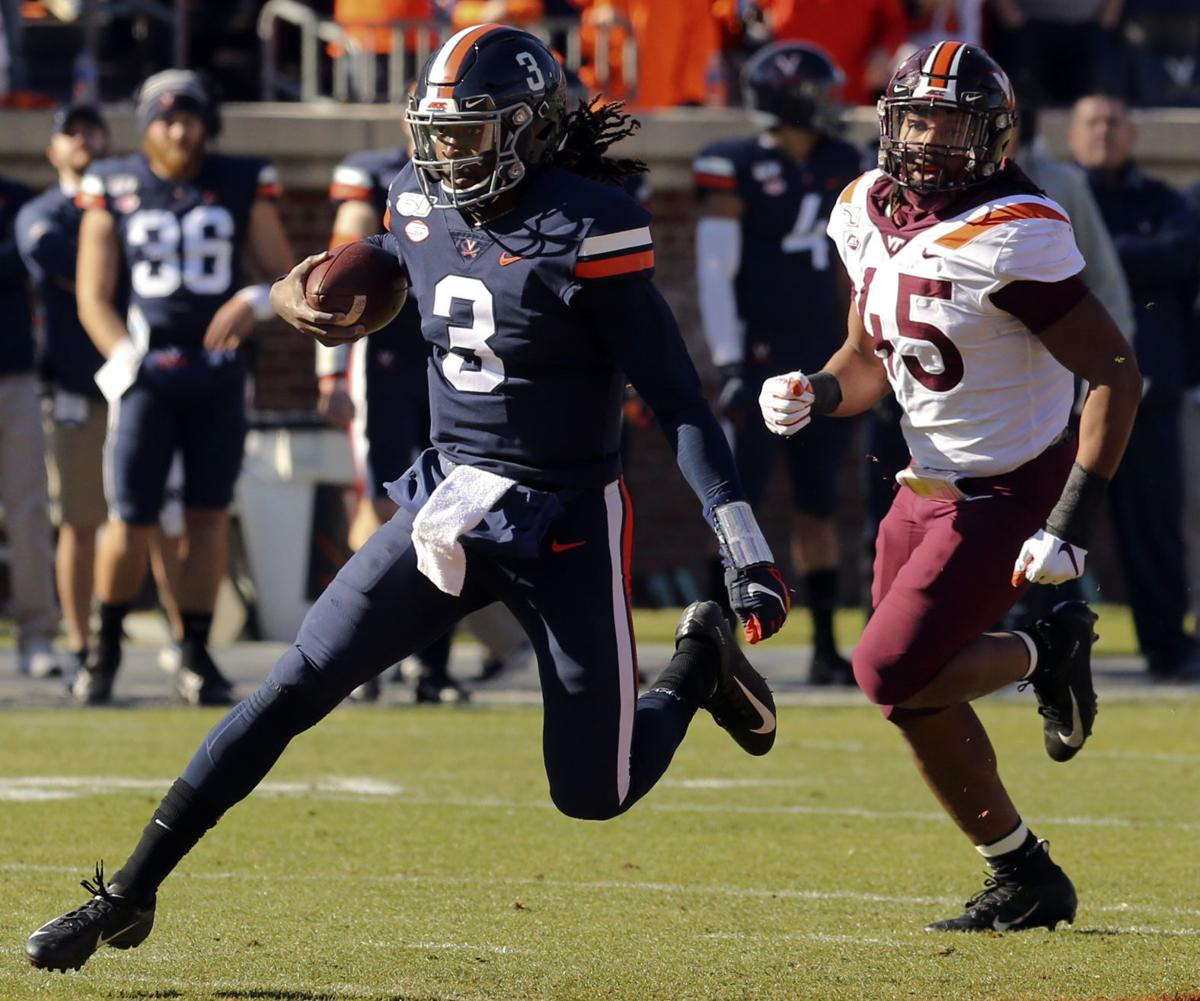 UVa Quarterback Bryce Perkins (3) runs the ball past Tech defender TyJuan Garbutt (45) on the opening drive of the Virginia Tech — University of Virginia football game in Charlottesville on Nov. 29 2019. 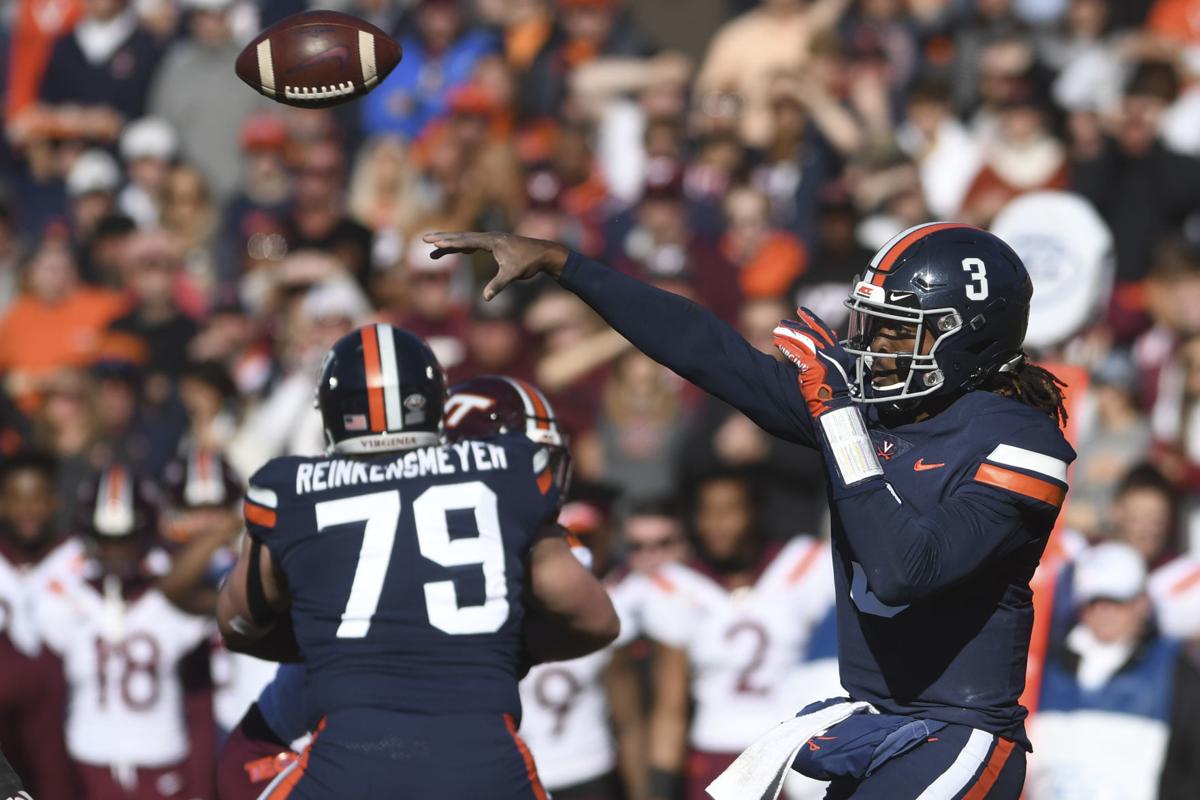 UVa Quarterback Bryce Perkins (3) runs the ball past Tech defender TyJuan Garbutt (45) on the opening drive of the Virginia Tech — University of Virginia football game in Charlottesville on Nov. 29 2019.

And yes, all he needed to understand that, even when Virginia takes the lead against Virginia Tech with 83 seconds remaining, that hardly means the game is over.

He saw them — maybe for an instant. Then Perkins and his Virginia teammates got engulfed by fans rushing off the hill and from the concourses, celebrating a 39-30 victory over the Hokies on Friday at Scott Stadium.

It was going to take something special for the Cavaliers to halt 15 years of futility against their in-state rival. Someone special. And that something and someone arrived in the form of Perkins, who used his legs early and his arm late to create a cathartic moment for UVa.

Perkins accounted for 475 of UVa’s 492 total yards on Friday. That’s a whopping 96.5%. But it’s also nothing new for the senior quarterback, who’s been everything the program craved since he arrived as a junior college transfer in January of 2018.

“I don’t think there’s anything he can’t do,” UVa coach Bronco Mendenhall said. “There’s not a play he can’t make. I think Bryce Perkins changes the face of UVa football. This era certainly doesn’t happen without Bryce at quarterback.”

The first time Perkins stepped on this campus, it was to watch the Tech-UVa game in 2017. He remembers the weather being cold. From a UVa perspective, that game wasn’t particularly memorable — a 10-0 Tech win, just another gulp from the Commonwealth Cup for the Hokies.

But from his very first spring game the next April, it was clear: The Cavaliers had something abnormally brilliant in Perkins. His speed, elusiveness, decision-making and instant leadership drew attention.

Friday was a culmination of two years of striving, of overcoming the disappointment of how last season ended, of taking the importance of this game personally.

“Shoot, anywhere I go, throughout the whole year, no matter how good or bad we’re doing, a lot of people just come up and say: ‘Man, just beat Tech. Whatever you guys do, just beat Tech,’ ” Perkins said. “This 15-year drought, the people of Charlottesville and all the fans and the people that have come through here have experienced that loss, that emptiness, for so long.

Perkins established the tone early by running for a 39-yard touchdown on UVa’s first possession. That followed two runs he made on third-and-long to move the chains.

He gave the Cavaliers a 13-3 lead later in the quarter with a slaloming 67-yard run through the Tech defense.

“Extraordinary,” UVa receiver Hasise Dubois said. “In the first half, the kid had five rushes for 137 yards. He just came to play.”

Dubois actually sold Perkins a tad short statistically. The QB finished the first half with nine rushes for 138 yards, but his throws looked out of rhythm. Loopy. Off-target.

That changed in the second half, when Tech adjusted to try to stymie Perkins’ rushing. Perkins amassed 246 of his 311 passing yards after intermission, including a crucial touchdown pass to Billy Kemp after the Hokies had taken their first lead.

“In the beginning, maybe he was rushing things,” Dubois said. “But as he was able to sit in the pocket and calm down, he was his normal self.”

Perkins was far from his normal self earlier in the week. He revealed after Friday’s game that he’d played through tonsillitis last weekend against Liberty and had to miss practice on Monday as he was getting his tonsils drained.

He says the doctors told him they were “amazed” that he played last Saturday, given his condition. Nobody was surprised, though, to see him out there in the biggest game of the year.

And dazzle. For Perkins, there was no other choice. After owning the fumble on the last play of last year’s overtime loss to Tech — a miscue that actually was a shared responsibility, given that it was a botched handoff — he’d been looking forward to this one for months.

“I had to sit with that all year, and it hurt,” Perkins said. “This game, I really wanted to go out there and be aggressive and just give everything I have for this team, not to let them down again.

“It means the world. All year long, all camp, spring — ever since that bowl game — we’ve been working as a team to be exactly here. We talked about it all year: ACC champs, beat Tech. Everything that we’ve done all year in practice and in games has led us to this moment right here.”

Everything you’ve done for two years.

The UVa Cavaliers avenged the past 15 seasons against the Virginia Tech Hokies with a 39-30 win at Scott Stadium in Charlottesville on Friday.…

Virginia will own tech for the next decade and if the academics weren't so strict tech wouldn't stand a chance. Mendenhall will start getting better players now especially since he's turned a few players who were barley 3 stars into draft picks with one most likely a 1st rounder tells it all. Imagine what he could do with a slew of 4 star players and a couple 5 stars

This should have been two wins in a row for Perkins except for the snafu last year. Perkins is phenomenal player and he made Bud Fosters defense look average at best.