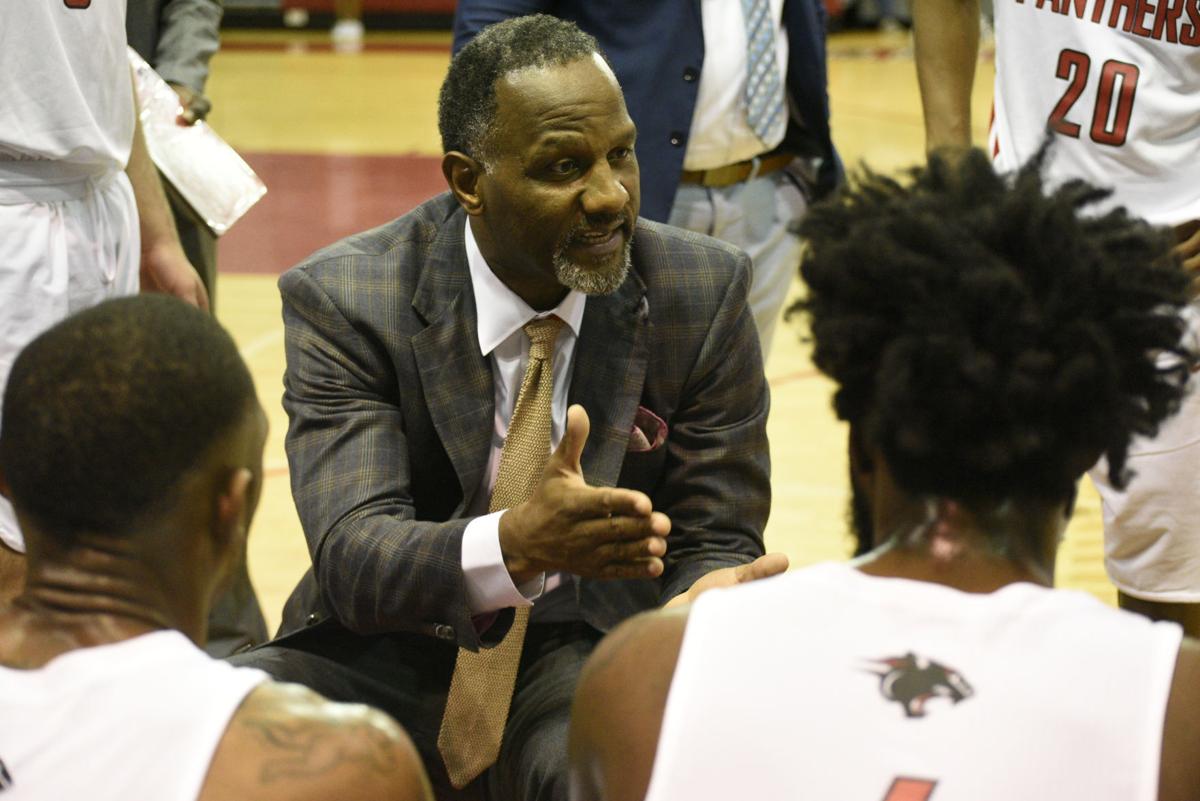 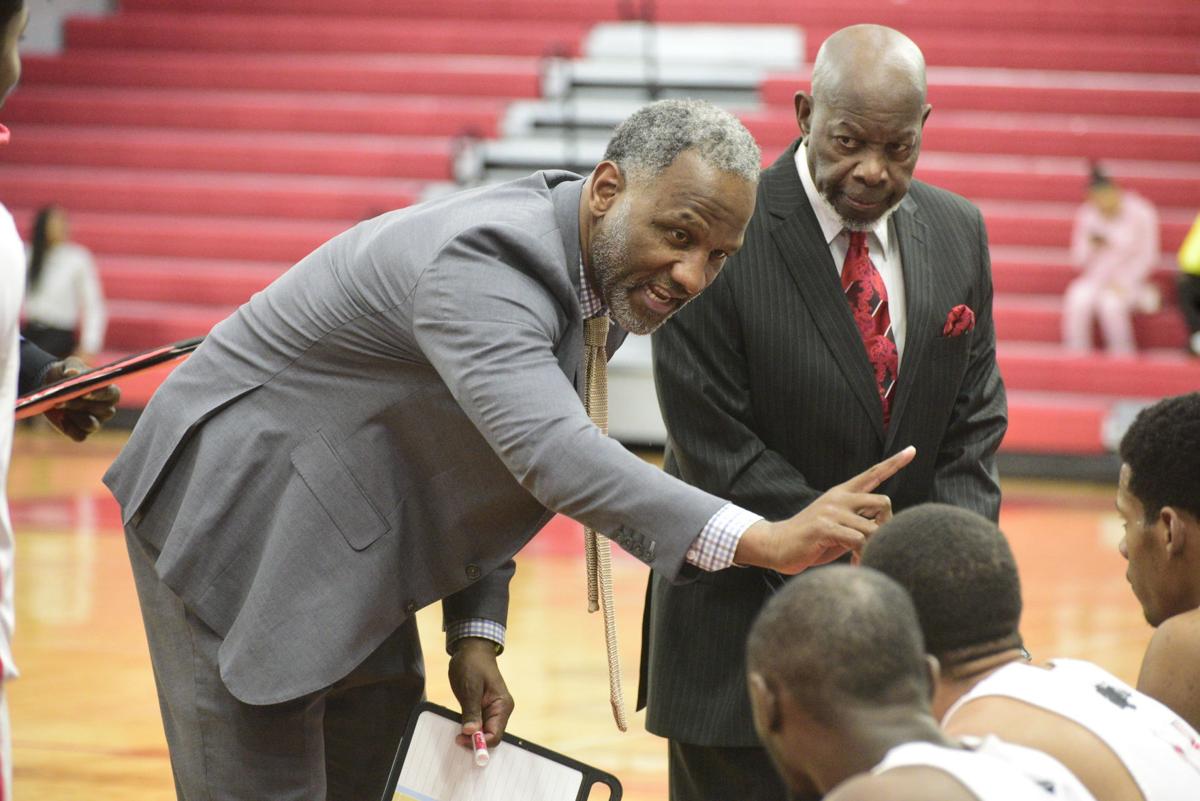 George Lynch (with ball) celebrates a key rebound in overtime in North Carolina's win over Cincinnati in the 1993 NCAA East Regional final. Lynch was voted the Most Outstanding Player of that regional. UNC went on to win the NCAA crown. 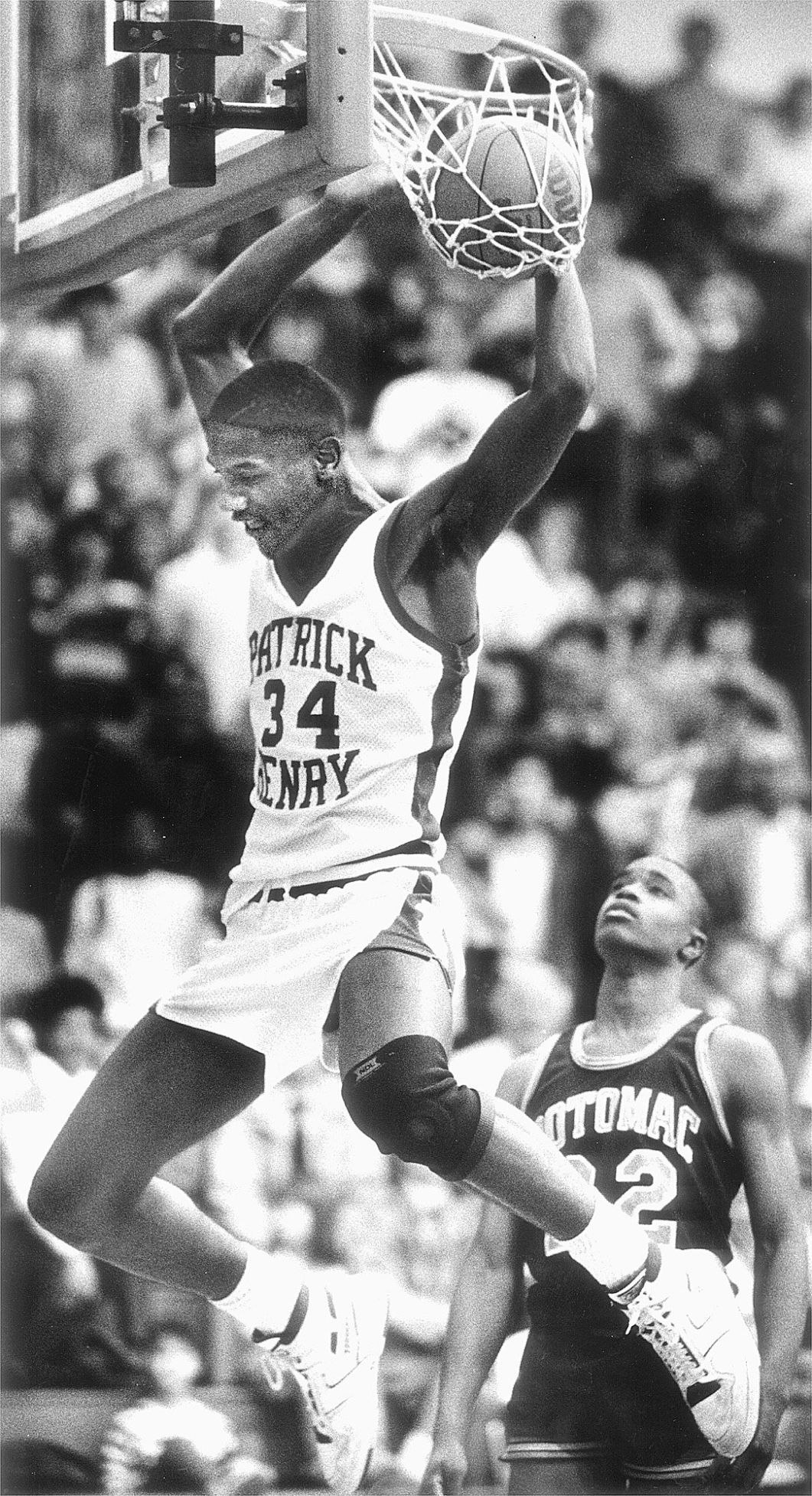 George Lynch scores for Patrick Henry in 1988. He went on to the NBA.

George Lynch (with ball) celebrates a key rebound in overtime in North Carolina's win over Cincinnati in the 1993 NCAA East Regional final. Lynch was voted the Most Outstanding Player of that regional. UNC went on to win the NCAA crown.

George Lynch scores for Patrick Henry in 1988. He went on to the NBA.

There was Woody Deans at Patrick Henry High School.

Larry Brown with the Philadelphia 76ers.

Lynch, 49, is now a head coach himself. He is in his second season steering the men’s basketball team at NCAA Division II member Clark Atlanta University.

“I played for some great coaches,” Lynch said in his small office last week. “Now having the opportunity to share that knowledge with the young men that I’m able to touch as a head coach, I get a lot of gratitude out of that.”

Lynch was a standout forward on an NCAA championship team with the Tar Heels and played in the NBA for 12 seasons.

With a resume like that, how has Lynch adjusted to coaching in a small-college gym that has only about 1,500 seats?

“When you get that head coach title, … it’s all the same,” he said. “You’ve got to make sure you can relate to the players and come across as a teacher.”

Lynch relates details of his playing career with his Clark Atlanta players.

“He told me about how he used to play defense, how he used to get rebounds,” senior forward Romaine Thomas said. “He tells us mostly about his coach, Dean Smith.”

As a PH junior, Lynch was the 6-foot-7 star of one of the greatest boys basketball teams in Roanoke history. The 29-1 Patriots won the 1988 Group AAA state title and finished the season among the top 10 in the national rankings.

That team included Russell Turner, who became a Division III first-team All-American at Hampden-Sydney and who is now the men’s basketball coach at UC Irvine; Curtis Blair, who shined at the University of Richmond before being chosen in the NBA draft; Percy Covington, who broke VMI’s career steals record; and Bernard Basham, who played football for Virginia Tech.

“For a group of kids to come out of a small area, we were a damn good team. We’d have been Top 5 in any decade,” Lynch said. “I just went and watched a [Georgia] high school team, … and I looked [back] at my high school team at Patrick Henry and I was like, ‘Man, we’d have dusted these kids off the floor.’ ”

He transferred to Flint Hill Prep in Northern Virginia for his senior year.

The Tar Heels won the ACC Tournament and reached the Final Four when he was a sophomore. As a senior, Lynch was the co-captain of a team that won the ACC regular-season title and the NCAA championship. He earned All-ACC first team honors that year, when he also was named the most valuable player of the NCAA East Regional and made the All-Final Four team.

As a coach, he said, he has adopted the way Smith “treated everyone fairly.”

Lynch was a first-round draft pick of the Los Angeles Lakers, where he spent the first three seasons of his NBA career.

He was never a teammate of the late Lakers legend Kobe Bryant, but he did play against him.

Bryant, Bryant’s daughter Gianna and seven others were killed in a helicopter crash last month.

“I have a 16-year-old daughter and a 14-year-old son. … I could just imagine what his wife and family is going through. That’s a tough pill to swallow,” Lynch said. “It really hit home because he’s part of the Laker family and part of the NBA family.”

Lynch later played for Brown’s 76ers for three seasons. He started for the 76ers squad that made the NBA Finals in 2001.

He returned to the college ranks in 2010. After Turner was hired as UC Irvine’s coach, Lynch came aboard as assistant athletic director for community development. He later became the strength and conditioning coach for basketball.

At Clark Atlanta, Lynch uses many of the offensive sets that Brown ran at SMU.

“I’ve watched Coach Brown. I’ve been in some of the ACC battles with Coach Smith. So I’ve seen how they reacted, watched how they teach certain things,” Lynch said. “I lean back on all that.”

After five years at SMU, Lynch served as an assistant coach for Grand Rapids in the NBA G League in the 2017-18 season.

Lynch said the National Basketball Retired Players Association helped him get the Clark Atlanta job. He said that organization donates scholarship money to any historically black college that hires a former NBA player as its coach.

The Panthers went 14-12 overall and 10-7 in the Southern Intercollegiate Athletic Conference in Lynch’s first season at the school. They entered Monday with a record of 9-13, 9-5 this season.

“Now I see, as a head coach, the ups and downs,” Lynch said. “Everybody talks about being a head coach; you’re never ready until you’re sitting in that seat, having the responsibility of calling the plays, running the practice, fundraising.”

Clark Atlanta has about 3,600 students. The campus is located near two other historically black colleges, Morehouse and Spelman.

“At this level, of course, you don’t eat at the nice restaurants that we ate in at Carolina. You don’t travel on a charter flight,” Lynch said. “But once I’m in between the lines, coaching is the same. I just don’t have the bells and whistles. When I get that opportunity to move up, I will appreciate that.”

Lynch said his biggest adjustment was getting used to Clark Atlanta’s limited budget.

“Once we play basketball on the court, I think we have an advantage because of my experiences,” he said. “But … [there are] things I would like to see for the program — having your own weight room, being able to take the guys out to a nice meal after we beat our crosstown rival, having shoes for the guys, having enough basketballs to run a practice.

One of his assistants is Melvin Scott, who was the co-captain of UNC’s 2005 NCAA championship team.

They try to pass on their Division I knowledge.

“A lot of these players are D-II for a reason — because they didn’t put the time in,” Lynch said. “So if I can get these kids to put … the quality time in, I think I can make them better players.”

He said some of the players and recruits know of him from the video game NBA2K.

They have also seen him in reruns of games on such channels as ESPN Classic.

“One kid was saying they saw me in a Classic game, playing against the Lakers,” he said. “And then somebody told me they saw the Duke-Carolina classic from ’92.”

The interaction with the players is his favorite part of coaching.

“To be able to see the young men look at you in the face and ask questions, whether it’s about your playing career as a pro or trying to give them the right information to go out on the court and be successful, that’s when you really enjoy it,” he said.