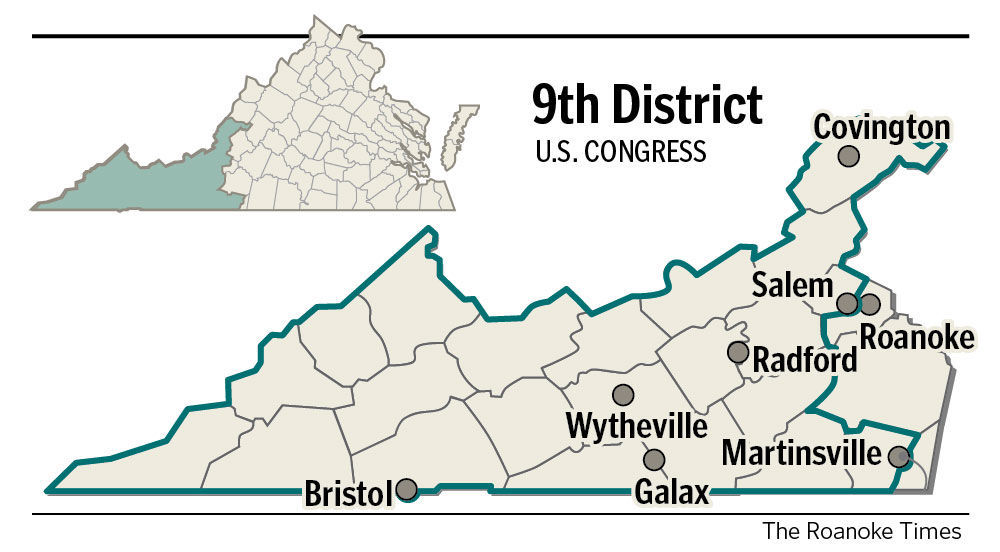 A map of the 9th Congressional District

A map of the 9th Congressional District

Somewhere, Elbridge Gerry is smiling. The U.S. Supreme Court says partisan gerrymanders are OK. To be fair, Gerry — the Democratic-Republican governor of Massachusetts in 1812 — is said to have thought that the salamander-shaped district that limited the voting strength of the Federalists was a bad idea. Nevertheless, he signed the redistricting plan anyway and secured his place in history.

Historical note: The bill plan was so unpopular that Gerry was voted out in the next elections, but the gerrymander worked. Despite a large Federalist majority statewide, the Democratic-Republicans stayed in control of the Massachusetts state Senate.

All that was then. This is now. Actually, this is about what’s about to happen come 2021, when the Virginia General Assembly will be tasked with drawing new maps for congressional and state legislative districts.

There’s a question whispered in some quarters for at least a decade that will come to a full debate then — so let’s go ahead and start it now. Should Roanoke be moved into the 9th Congressional District?

This is a question that matters not just on Campbell Avenue, but all the way out to the Cumberland Gap. Here’s why.

First, let’s do some math. Virginia’s population in 2010 was 8,001,024, which meant that each of the 11 congressional districts was supposed to be about 727,366 people. By 2020, the state’s population is projected to be 8,655,021 — we’ll find out for sure in the census. Based on projections, Virginia isn’t expected to gain an additional congressional seat, so that means each district will need to be about 786,820 people.

Given the population growth in Northern Virginia, the three congressional districts there are surely overpopulated — and will need to shrink geographically to get down to 786,820 people apiece. That means others will need to grow geographically. Meanwhile, most localities in the 5th District in Southside and the 9th District in Southwest have lost population. By our math (and population estimates from the Weldon Cooper Center for Public Service at the University of Virginia), the 9th District has lost at least 24,618. The actual figure is no doubt higher, but Henry County is split unevenly between two congressional districts. Henry County has lost 2,713 people; if that emigration is evenly distributed, that means about 2,116 of those were 9th District residents, so that ups the loss to 26,734. The 9th also includes some of Roanoke County, which has gained population, so we need to shave that figure down some. To make things simpler, let’s just round it off to 26,000. Close enough for government work, as they say.

That means the 9th District today is probably about 701,366 people — which means to meet the new ideal, the district will need to expand enough to pick up 85,454 people. Where will it go to get them?

Our reference to Gerry was a bit of misdirection because Virginia’s 9th District is actually one of the least gerrymandered districts in the country. Geography hems in even the most partisan mapmakers on either side. The 9th can’t expand into Tennessee or Kentucky or West Virginia or North Carolina. Wedged into the toe of Southwest Virginia, it can only expand in one general direction — northeast. That’s where we start to run into trouble — and Roanoke.

The 9th has been growing northeast for some time. In 1962, the last redistricting before the Supreme Court’s “one man, one vote” ruling, the 9th only came as far as Giles and Pulaski counties. By 1972, it took in Radford and Montgomery County. By 1982, it picked up Floyd and Craig counties. By 1992, it had started to nibble into the rural parts of Roanoke County.

General Assembly mapmakers since then — generally Republicans — have faced a problem. The Roanoke Valley was the home base of the 6th District’s Republican congressman, Bob Goodlatte. They could pare away a few precincts in Roanoke County and, in 2012, they could even take away Salem and give it to the 9th — especially since the 9th District’s new congressman, Republican Morgan Griffith, lived in Salem. Generally, though, they tried to avoid the Roanoke Valley by pushing the 9th north to take in Covington and Alleghany County, and east to take in Martinsville and part of Henry County.

Now, though, Goodlatte has retired, and his successor, Republican Ben Cline, lives in Rockbridge County. The Roanoke Valley is fair game. And, realistically, where else is the 9th District going to go to pick up 85,434 people? If it goes further east to Danville, it starts to eat away at the historic heart of the 5th District, now held by Republican Denver Riggleman of Nelson County. If the 9th goes further north, picking up Botetourt County or parts of the Shenandoah Valley without disturbing Roanoke, then the 9th really starts to look gerrymandered — even if it’s not for partisan purposes. The logical way to draw a new 9th would be to bring in the entire Roanoke Valley, and then give Martinsville and vicinity back to the 5th to balance things out.

Sorry to disappoint Democrats, but adding blue Roanoke to the 9th District wouldn’t change the politics much. In 2016, Hillary Clinton carried Roanoke by 7,497 votes. But Donald Trump carried Roanoke County by 14,208. Adding the whole Roanoke Valley to the 9th District actually makes it more Republican — and it was already one of the most Republican districts in the country (voting 69% for Trump).

What we really have here is a philosophical question: While adding the Roanoke Valley to the 9th District wouldn’t change the bottom-line politics of the 9th, would it change the overwhelming rural character of the district? The answer to that is clearly “yes.” Adding the Roanoke Valley to the 9th District would make it more Republican, but less rural. If you’re in the rural part of the 9th District, you probably don’t want that. You’d rather have rural parts of Southside, even if they’re more distant. If you’re in the Roanoke Valley, you’d probably rather be connected with other cities, such as Lynchburg, as you are now, than with the coalfields. But none of that may matter: The odds seem good that Roanoke will wind up in the Fightin’ Ninth.