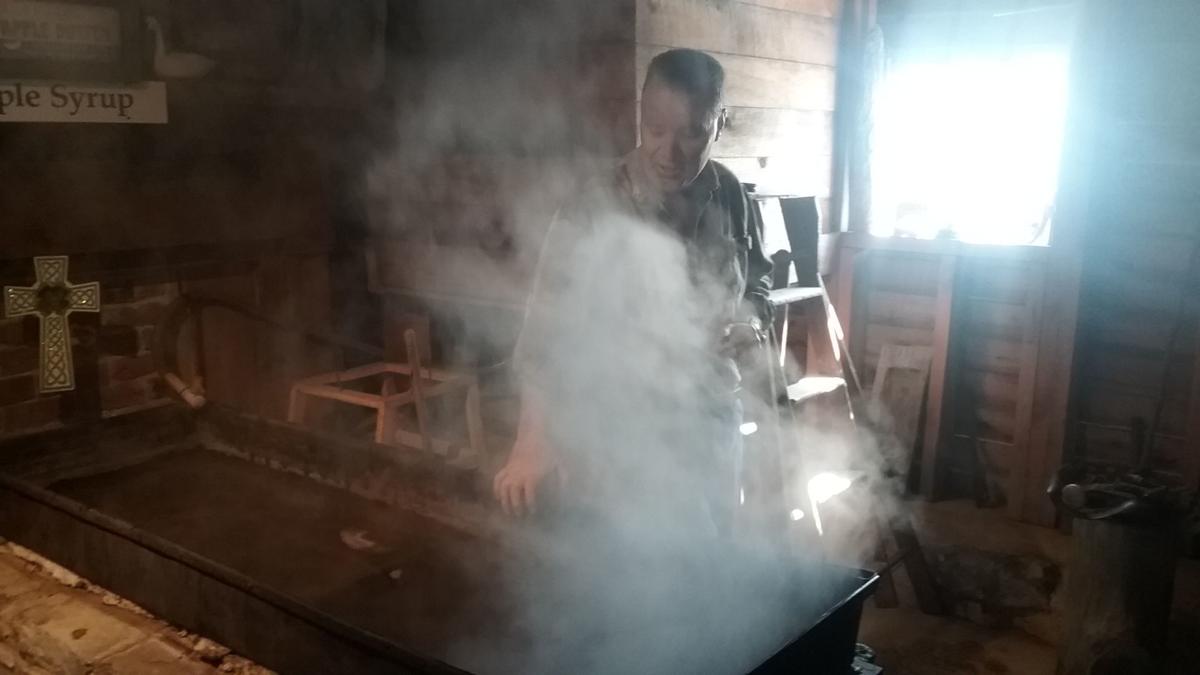 Tim Duff (above) boils down maple sap into maple syrup the old-fashioned way at Duff’s Sugar House in Highland County. Most maple farms now, though, look more like small dairy farms, with miles of tubes carrying maple sap to a processing center, such as the one (left) at Puffenbarger’s Sugar Orchard in Highland. Our editorial at left looks at the opportunity for expanding Virginia’s maple syrup production. 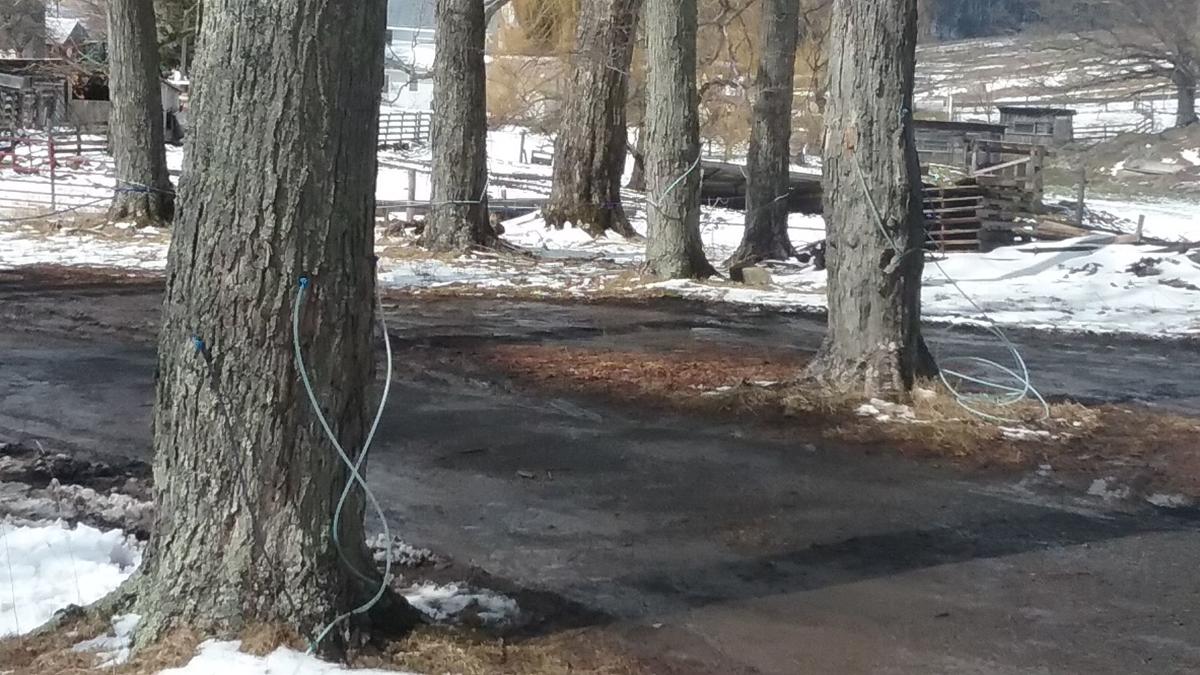 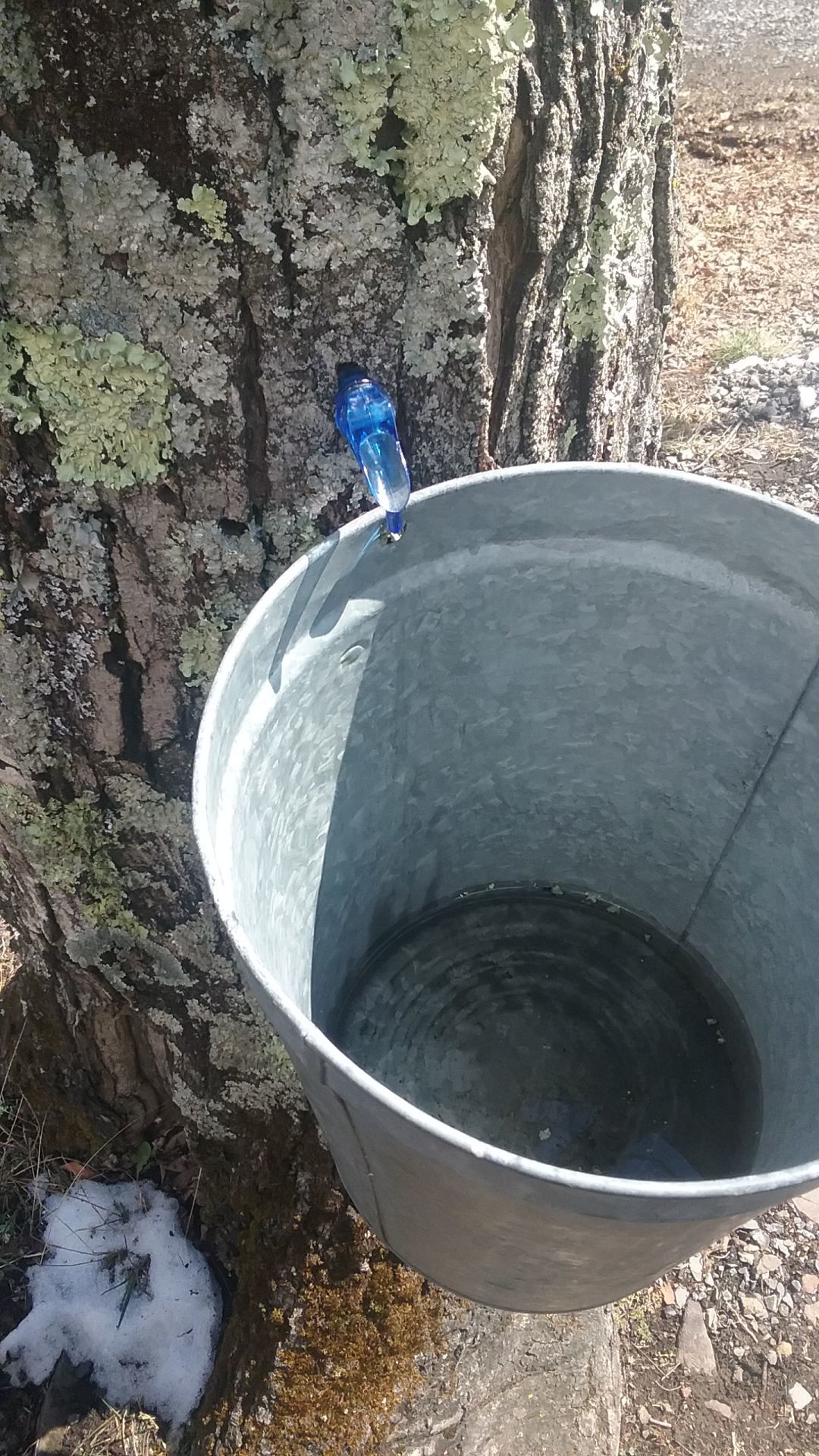 Tim Duff (above) boils down maple sap into maple syrup the old-fashioned way at Duff’s Sugar House in Highland County. Most maple farms now, though, look more like small dairy farms, with miles of tubes carrying maple sap to a processing center, such as the one (left) at Puffenbarger’s Sugar Orchard in Highland. Our editorial at left looks at the opportunity for expanding Virginia’s maple syrup production.

About two hours north of Roanoke lies a topographical, geological and biological curiosity.

Highland County is, as its name implies, high up in the mountains; it’s said to have the highest average altitude of any county east of the Mississippi. It’s also one of the least-populated — with 2,214 people, it’s certainly the least populated county in Virginia.

Highland does, however, have spectacular views, lots of sheep (more sheep than people, in fact), a volcano (which, fortunately, hasn’t erupted in 35 million years) and something that draws thousands of tourists each spring.

For now, the public service advisory: One of the rites of spring in Virginia will play out this weekend and next — the 60th Highland Maple Festival is March 10-11 and 17-18.

The festivities actually began last month, with the annual crowning of the Maple Queen, followed by the Maple Queen Ball. During the festival proper, thousands ascend the mountains to Highland to tour the “sugar camps” where maple sap is boiled down into maple syrup and do all the other things one does at festivals.

For most, this is simply a pleasant day trip deep into the countryside. It’s certainly that. It’s also a window into economics, and where economics are concerned, politics can’t be far behind.

First, though, we must look at the sweet science that has made a tiny county in Virginia a center for maple syrup — a product more often associated with Vermont or Canada.

Sugar maples range as far south as Tennessee and North Carolina, although they do best in cool climates, which explains their concentration in Highland County — where the average low temperature in winter often matches that of Toronto. The county’s logo is a maple leaf. It’s not the same design as the one on the Canadian flag, but Canadians might find themselves very much at home here.

Early spring in Highland involves a lot of freezing nights and warm days — and it’s those freeze-thaw cycles that prompt heavy flows of sweet-tasting maple sap. Native Americans further north figured this out centuries ago, and taught European colonists how to turn it into syrup. Before the Civil War, maple syrup even had political significance: Abolitionists preferred it as a sweetener because the alternatives — cane sugar and molasses — were often produced by enslaved workers in the South.

Today, 70 percent of the world’s maple syrup is produced in Quebec. Vermont is the largest American producer, accounting for about 6 percent of the world’s supply. Further south, “maple sugaring” persisted in Appalachia as part of subsistence farming, says Mike Rechlin, a former forestry professor at Yale who now lives in Franklin, West Virginia, where he advises on forestry practices — and also makes some maple syrup on the side.

In 1958, Highland held its first maple festival — the beginning of what today we’d call “agri-tourism.” That event drew 600 visitors. Nowadays, the two weekends of the festival are said to draw upwards of 50,000 people. It’s said to be the second-biggest maple festival anywhere in North America; only the one in St. Albans, Vermont, is bigger.

And yet Highland is a miniscule producer by national standards: Highland produces about 1,646 gallons of syrup each year, according to the U.S. Department of Agriculture. By contrast, Vermont produces nearly 1 million. When it comes to marketing syrup, tiny little Highland County punches far above its weight.

Here’s where biology and economics overlap. Only about 2 percent of the maple trees in Highland are actually tapped. Highland could produce a whole lot more syrup. So could other Virginia localities, especially those in the mountains. That’s because outside Highland County, Virginia’s sugar maples usually aren’t tapped at all. (There is a smaller maple festival at Whitetop in Grayson County but only sporadic syrup operations elsewhere).

What would it take to grow a bigger sugar maple industry? This is something that Tom Hammett, a professor in Virginia Tech’s Department of Sustainable Biomaterials, has been working on. Much like some people’s relationship status on Facebook, it’s complicated.

The stereotypical image of maple sugaring is a bucket on a nail. That’s quaint. That’s also not really how it’s done, except for the tourists. A modern syrup operation typically involves miles and miles of plastic tubes running through the forest — carrying the sap from the tapped tree to a storage vat and all sorts of pumps and evaporators. It’s really like a small dairy operation, except instead of milking cows these farmers are milking trees. The investment is sometimes similar, too — in the six figures for all the equipment.

Before a property owner spends that kind of money, though, Hammett says they need to make sure there’s a way to get their syrup beyond festival sales and into supermarkets. “It’s not just ‘let’s boil more sap,’” Hammett says.

Virginia doesn’t like to think of itself as running behind West Virginia in, well, anything, but here’s a field where West Virginia is far ahead of us. According to federal statistics, Highland County alone produces more maple syrup than all of West Virginia — yet West Virginia last year won a $203,000 million federal grant to study how to grow a bigger maple industry. (Curiously, some of that research involves Virginia Tech and is taking place in Highland County, specifically at Laurel Fork Sapsuckers. That operation is run by timberman Ronnie Moyers, who has kept intensive records of how he’s thinned his woods to encourage the sugar maples, and how they’ve produced more sap as a result).

Virginia will never be Vermont (and certainly not Quebec), so maple syrup will never be a full-time operation here. However, Hammett touts several reasons why the Virginia Department of Agriculture and Consumer Services should follow West Virginia and encourage property owners to turn to maple production: It’s extra income, and the maple season comes at what is otherwise an off-time for farmers.

There is some concern that a changing climate could squeeze out southern producers, although so far Hammett says maple farmers aren’t seeing decreased production — just faster flow in a shorter period of time.

Those may not be things you think about if visit Highland and try some syrup-covered pancakes this weekend or next. But others are.

Hot off the Grill Sweepstakes