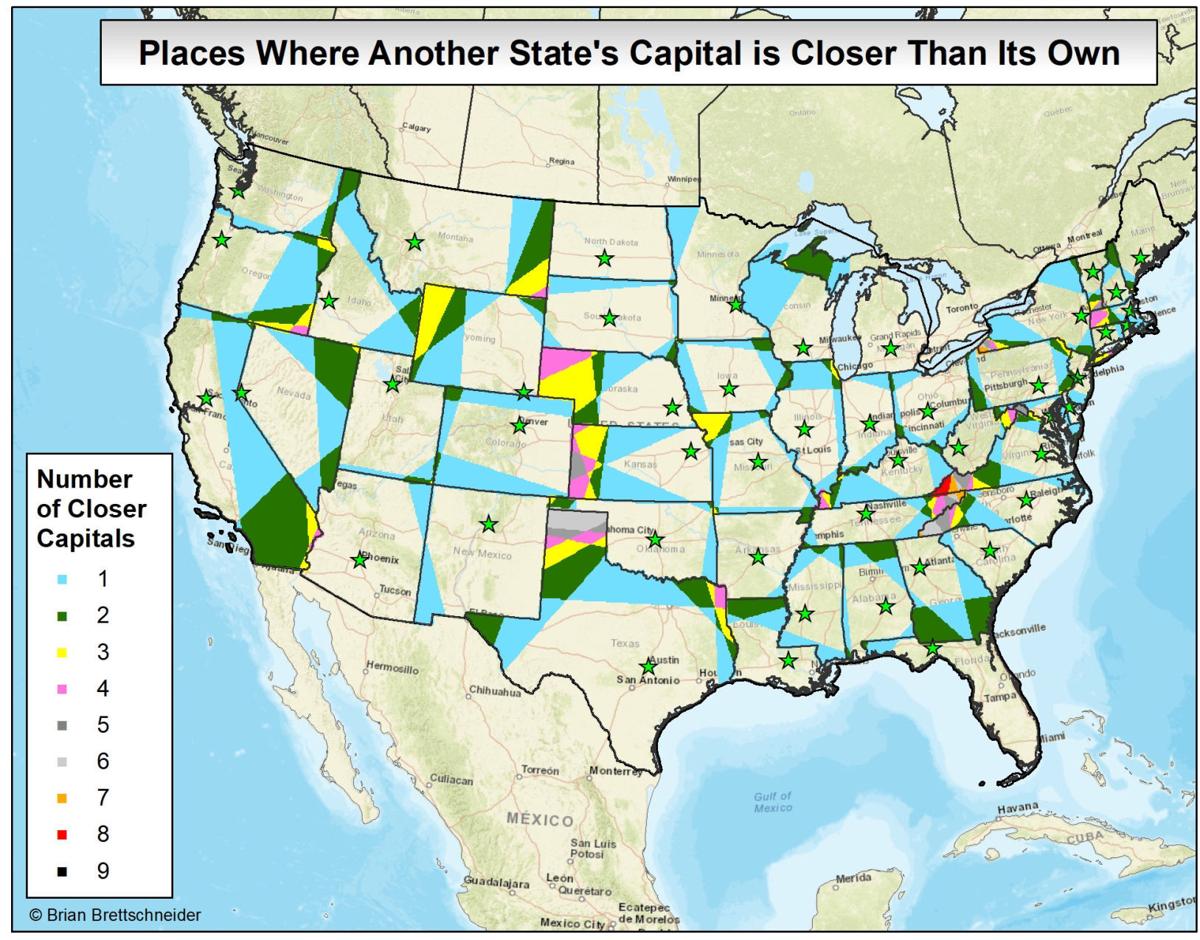 This map above shows which parts of states are closer to a state capital other than their own. Which state has the most? Virginia, where parts of Southwest Virginia are closer to eight — and sometimes nine — other state capitals. The map below shows where those lines are. Our editorial at left explains more. Meanwhile, a fun fact: The French island of Corsica (famous as the birthplace of Napoleon Bonaparte) is closer to 13 other national capitals than it is to Paris. 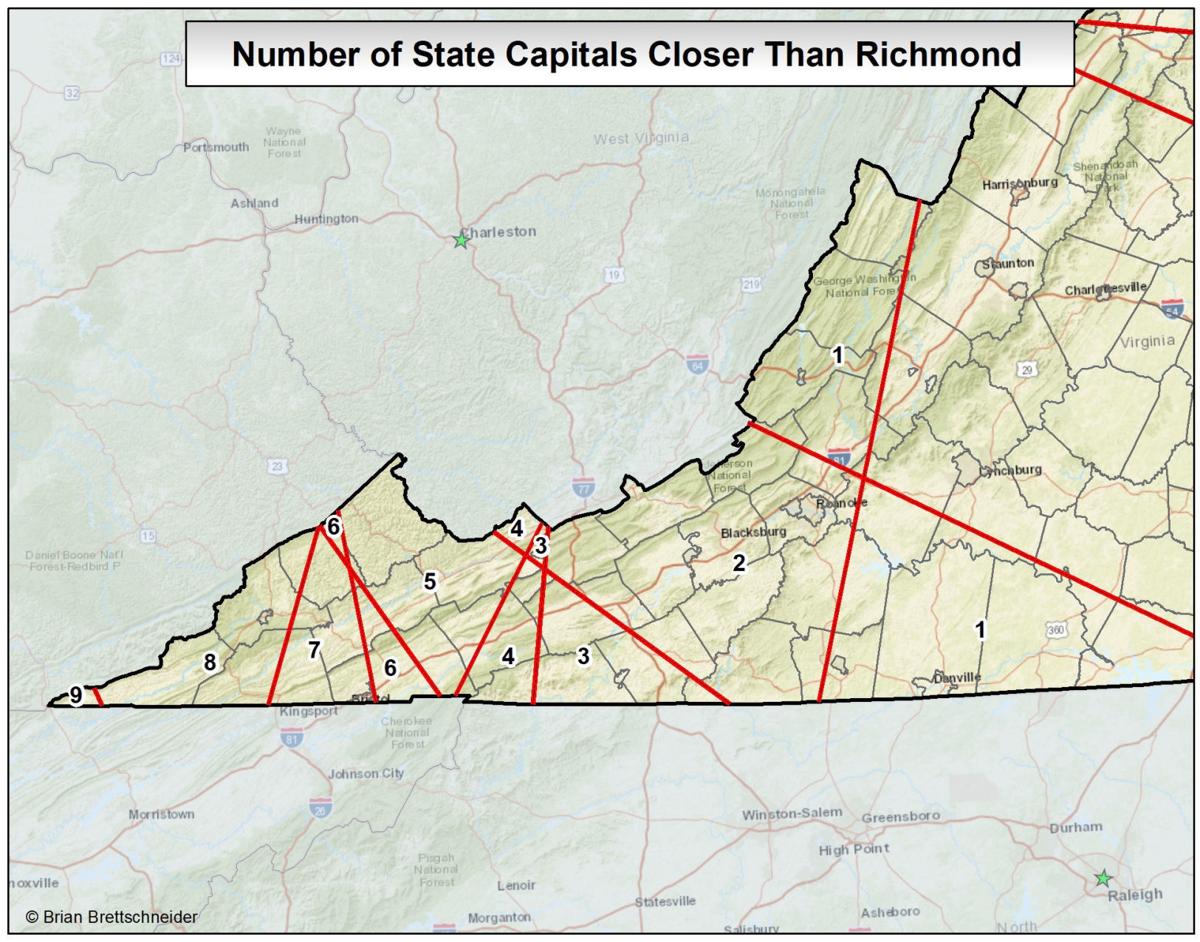 This map shows which parts of Southwest Virginia are closer to other state capitals than their own -- and how many. Notice the little piece of Lee County that's closer to nine.

This map above shows which parts of states are closer to a state capital other than their own. Which state has the most? Virginia, where parts of Southwest Virginia are closer to eight — and sometimes nine — other state capitals. The map below shows where those lines are. Our editorial at left explains more. Meanwhile, a fun fact: The French island of Corsica (famous as the birthplace of Napoleon Bonaparte) is closer to 13 other national capitals than it is to Paris.

This map shows which parts of Southwest Virginia are closer to other state capitals than their own -- and how many. Notice the little piece of Lee County that's closer to nine.

Go far enough west in Virginia and you’ll hear people cite a geographical curiosity that has a political twist to it: That some places in far Southwest Virginia are closer to seven other state capitals than they are to their own.

This gets repeated so many times that it’s become an accepted fact. But is it?

As things turn out, it is true — but only partially true.

Now, here’s the rest of the story: Some parts of far Southwest Virginia are actually closer to eight other state capitals. And a tiny piece of it is closer to nine.

These are not new facts. They’ve been true since 1819, when Alabama was admitted to the union with Montgomery as its capital. But they are new to the popular imagination, which still cites the figure seven.

The updated version gives even more political ammunition to those who make the case for how estranged Southwest Virginia is from the rest of the state. For that version, we are indebted to someone who lives even further away.

That would be Brian Brettschneider, a climate researcher with the University of Alaska Fairbanks (at their International Arctic Research Center). In his day job, he makes lots of weather-related maps, which has led him to a cartographical hobby in his spare time. Under the Twitter handle @climatologist49, he tweets out some of the other maps he makes – some serious, some more irreverent.

Among our favorites: “Map of places with the local saying, “if you don’t like the weather, wait 15 minutes.”

And then there was the one tweeted out a few weeks ago: “Places Where Another State Capital Is Closer Than Its Own.”

This caught our eye for one big reason: It’s not just that Southwest Virginia is closer to seven — err, make that nine — state capitals than our own. It’s that Brettschneider found that Virginia has more places further from its state capital than any other state.

Here, we’ve always thought Virginia was unique because of our history. We still are. But we’re also unique for what some might argue is a more dubious reason. We’ve always intuitively known that Southwest Virginia was a long way away from Richmond. Brettschneider, armed with nothing more than his home computer and the ArcGIS mapping program, has now given some data-driven context for just how unusual that is. And it only took him about 90 minutes one Saturday morning.

Every state — other than Alaska and Hawaii — have at least some part of the territory that is closer to some other state’s capital, usually one or two. For many, though, it’s just a sliver of territory in a corner of the state. Those with centrally-located capitals, a square or rectangular shape, and neighbors with capitals not near your state’s border tend to fare the best.

Only three, though, hit the closer-to-seven-other-state-capitals mark. That’s a tiny part of western North Carolina along the Tennessee-Georgia line, a little piece of southwest New York along the Pennsylvania line, and, of course Southwest Virginia.

But nobody hits the eight or nine mark. Nobody, that is, except Virginia.

The maps at right show the particulars. We in the Roanoke and New River valleys are closer to two other state capitals than Richmond — specifically, Charleston, West Virginia and Raleigh, North Carolina. Once you get past Wytheville or Hillsville, you start picking up more state capitals, first three, then four and soon five as you travel through Smyth County. You add a sixth once you get to Abingdon. Once you get to Bristol (and parts of Dickenson, Russell, Scott, Washington and Wise counties), you’re finally in the fabled seven-capital range.

But, as folks in Southwest Virginia know (and sometimes politicians from the rest of state don’t appreciate), there’s still a lot of Virginia left to go. In Norton, most of Wise County, about half of Scott County, and most of Lee County, you’re actually closer to eight state capitals, a mark no other state can match. But, wait, there’s more!

Keep going west on U.S. 58 and until you hit Ewing in Lee County. At that point, you pick up a ninth state capital that’s closer than Richmond. And there’s still 18 miles to go before you hit the Cumberland Gap. If you continue on that drive — and it’s a pretty drive — you’ll finally get to a point where Brettschneider says the mileage works like this.

Chattanooga, Tennessee has made a tourist attraction out of Rock City — “see seven states!” All we lack at Ewing is a lookout tower tall enough to see nine state capitals.

All joking aside, there are political implications to all this (you knew this was headed there, right?). If a tree falls in the forest and no one is there to hear it, does it make a sound? The political equivalent of that is: If something happens in Southwest Virginia, does it make a sound in Richmond? Southwest Virginia does have legislators in Richmond, but not many, and their numbers get fewer every 10 years when the census comes out and redistricting takes seats away from the southwest and adds them to Northern Virginia.

At Ridgeview High School in Dickenson County, there’s no high school chorus. There’s also no masonry program. Many things that are taken for granted at schools in the affluent urban crescent are missing there because the county can’t afford them, and the state doesn’t provide enough funding to pay for them, either. Parts of Dickenson County are closer to five other state capitals than Richmond, other parts closer to six, seven and eight. Might that make a difference?

At Flatwoods Elementary and Jonesville Middle School in Lee County, the roofs leak and there’s not enough money to fix them. Whenever it rains, students at Flatwoods have a special chore — to set out trash cans to catch the drips. Those students live closer to eight other state capitals. Some at Jonesville Middle live closer to nine. Might that make a difference, too?

Brettschneider’s computer can’t tell us that. But feel free to make your own calculations.