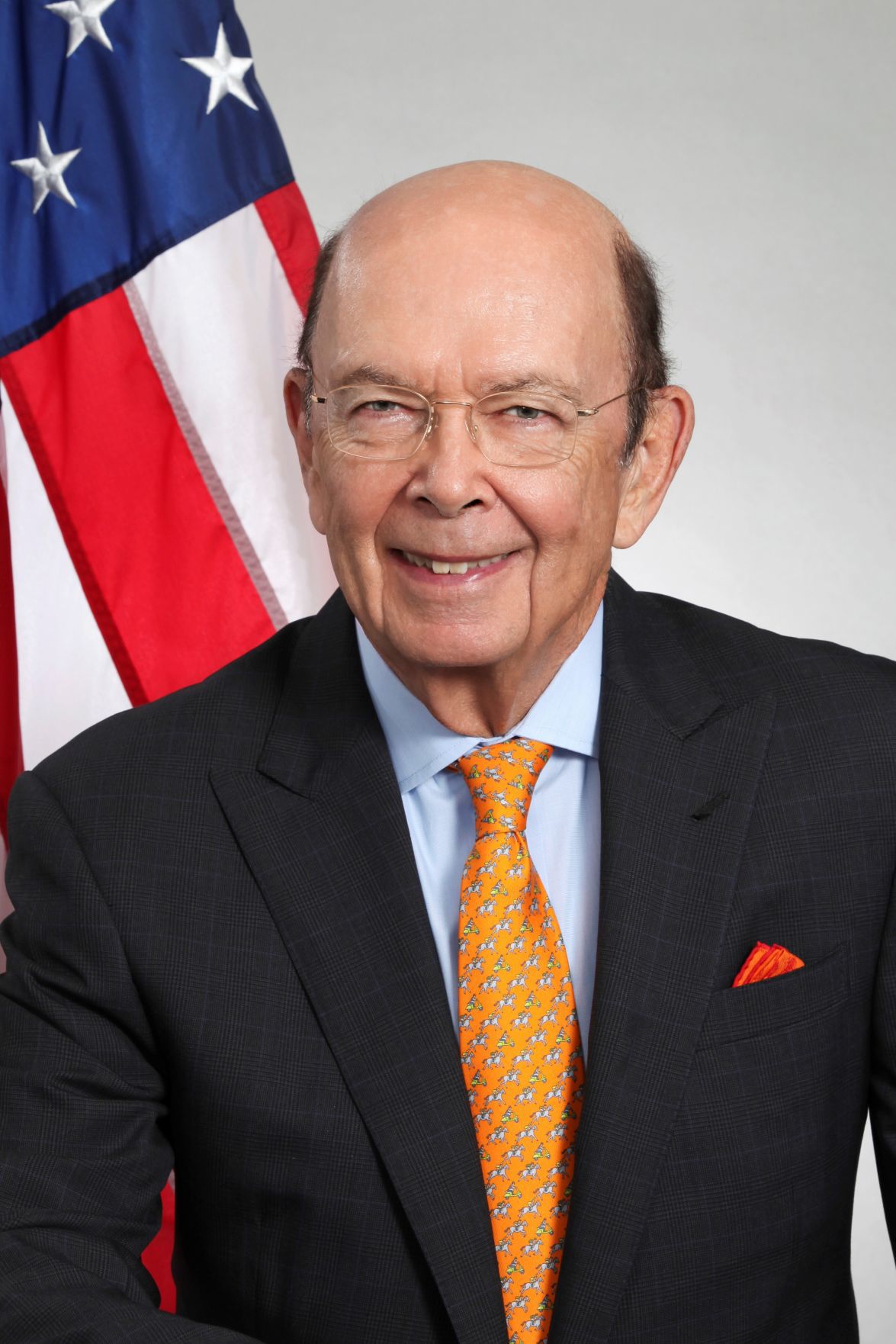 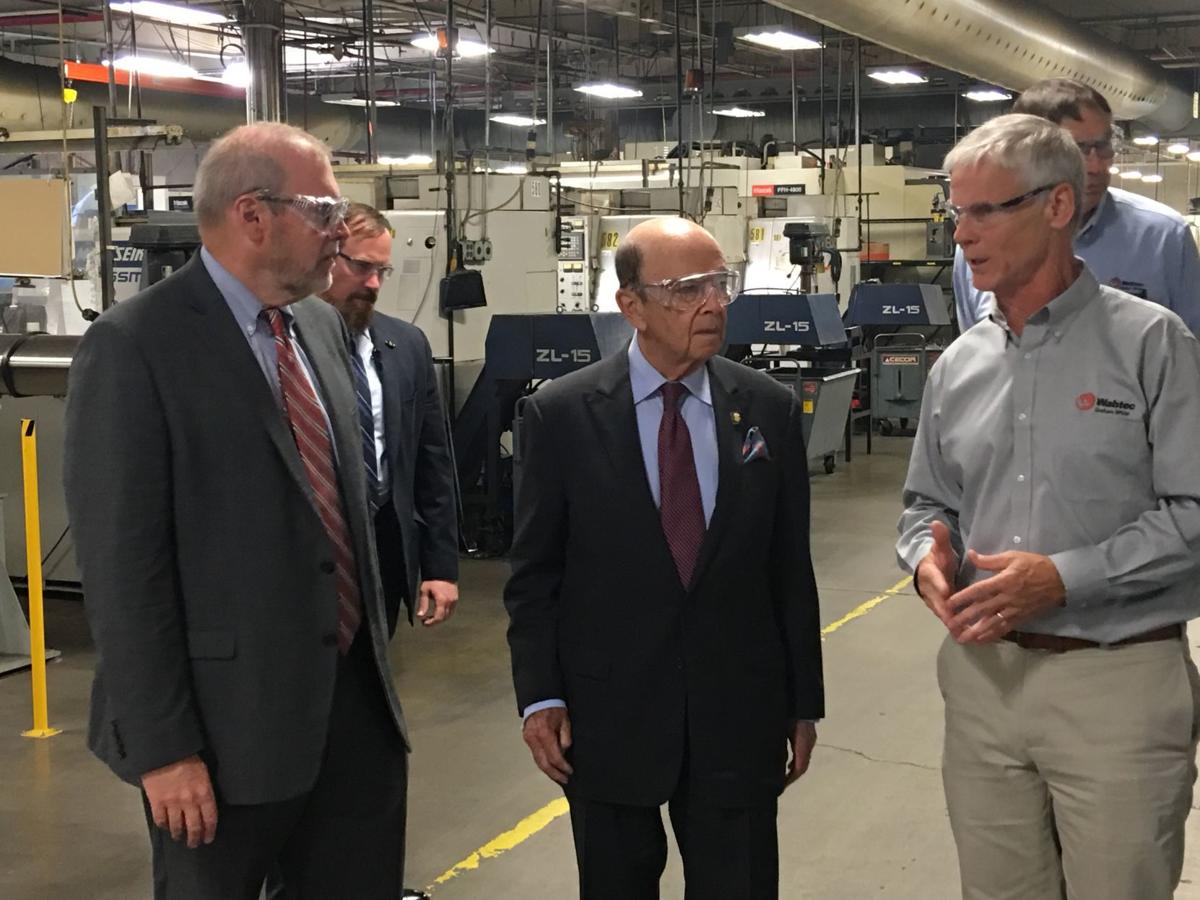 U.S. Secretary of Commerce Wilbur Ross (center) was in the Roanoke Valley on June 14 to talk up the U.S.-Canada-Mexico Agreement, the proposed successor to the North American Free Trade Agreement. Ross toured the Graham-White plant in Salem, which makes components for the transportation industry, because the company’s two largest export markets are Canada and Mexico. At left is U.S. Rep. Morgan Griffith, R-Salem. At right is Dan Hughes, director of operations at Graham-White.

U.S. Secretary of Commerce Wilbur Ross (center) was in the Roanoke Valley on June 14 to talk up the U.S.-Canada-Mexico Agreement, the proposed successor to the North American Free Trade Agreement. Ross toured the Graham-White plant in Salem, which makes components for the transportation industry, because the company’s two largest export markets are Canada and Mexico. At left is U.S. Rep. Morgan Griffith, R-Salem. At right is Dan Hughes, director of operations at Graham-White.

Ross is the U.S. Secretary of Commerce.

The Roanoke Times posed several thoughtful questions on rural America on the occasion of my official visit June 14 (“4 questions for Secretary Ross.”) The Trump Administration is doing far more for areas like Roanoke than any of its recent predecessors. In 2018, tax cuts saved the average American household making $75,000 over $2,200. The unleashing of American energy has cut utility and gas bills by many hundreds of dollars annually for American families. Corporate tax cuts and immediate expensing of capital expenditures have stimulated corporate growth investments. So has the elimination of burdensome and unnecessary regulation. These benefit all Americans by reducing unemployment to record lows and wages are finally rising as a result.

Roanoke was hit hard by unfair foreign competition that was permitted to destroy furniture and other industries. President Trump is pushing hard to put America first. In 1992, the year before NAFTA was ratified by Congress, we sold Mexico $5 billion more in goods than they sold to us. In the nine years before NAFTA went into effect, the earliest years for which data is available, the U.S. ran a $14 billion trade in goods deficit with Mexico. In the 9 years immediately after NAFTA, that skyrocketed to almost $180 billion, increasing by more than a factor of ten. Our cumulative trade deficit with Mexico since 1985 exceeds $1 trillion, 98 percent of which came after NAFTA went into effect. This is why we need USMCA. It will level the playing field by (1) requiring that 40 percent or more of auto manufacturing be done by workers earning at least $16 per hour in order to qualify for preferential tariff treatment, (2) lowering or eliminating tariffs on agricultural and other American exports, especially low value shipments, (3) protecting intellectual property rights, and (4) cracking down on counterfeits and currency manipulation and stimulating U.S. commerce. The Department of Commerce has dramatically increased the number of investigations into the illegal and unfair subsidies of exports by foreign countries over the prior administration.

First responders and public safety in rural areas will also benefit from the work of the First Responder Network Authority, or FirstNet. FirstNet is responsible for the buildout of a nationwide public safety broadband network that will provide dedicated priority access to public safety and increase rural coverage.

Like other parts of the country, Roanoke’s workforce is dealing with skills mismatches for workers of all ages. President Trump understands this problem and has created the National Council for the American Worker and the American Workforce Policy Advisory Board, which I am honored to co-chair alongside Advisor to the President Ivanka Trump. We are developing a national strategy to better prepare Americans for family-sustaining jobs. Our first initiative was the “Pledge to America’s Workers.” More than 280 companies and organizations large and small have pledged to provide 9.9 million enhanced career opportunities, on-the-job training, and apprenticeships for American workers over the next five years. More employers are pledging every day and we welcome commitments from employers in the Roanoke area.

When I toured the Graham-White railroad equipment plant I was thrilled to learn that they have a successful part-time internship program for high school seniors. The company even hosted a signing ceremony for the newly selected interns and their families. This is the type of activity we are trying to develop elsewhere.

While college pays off for most, it’s not a good fit for everyone. More than one-third of college students do not have a degree even after six years. Instead, they may have tens of thousands of dollars of student loans and no marketable skills. One-third of all college graduates are working at jobs that do not require a college degree. Many would be far better off earning $50,000 per year in a modern, clean, safe factory. President Trump created 500,000 manufacturing jobs, and there are 7.5 million vacant jobs but only 5.9 million unemployed persons. We must bring people into the workforce and that need will grow as USMCA creates tens of thousands of more jobs.