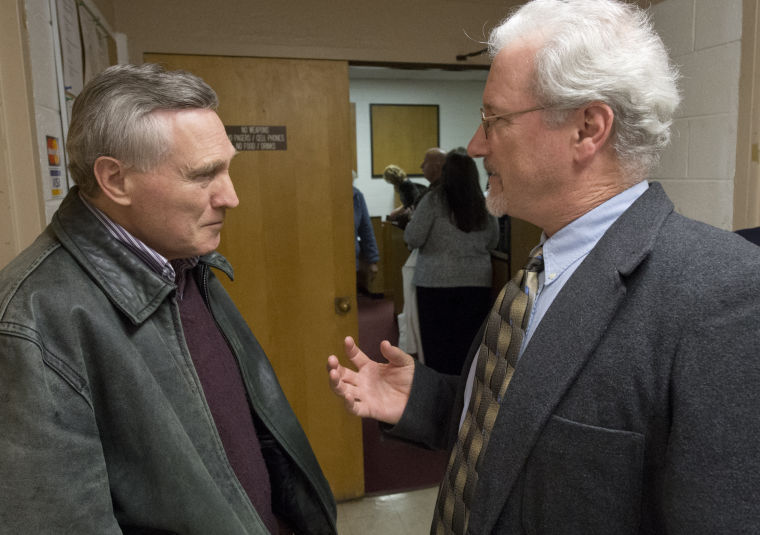 Buena Vista Councilman Tim Petrie (right), the only vote against defaulting on the upcoming January payment, speaks to former Councilman Sam Mays. Petrie said the council should make the payment while it negotiates with the insurance company.

Buena Vista’s municipal building is one of the city properties pledged as collateral to secure the $9.2 million bond used to finance the Vista Links golf course. 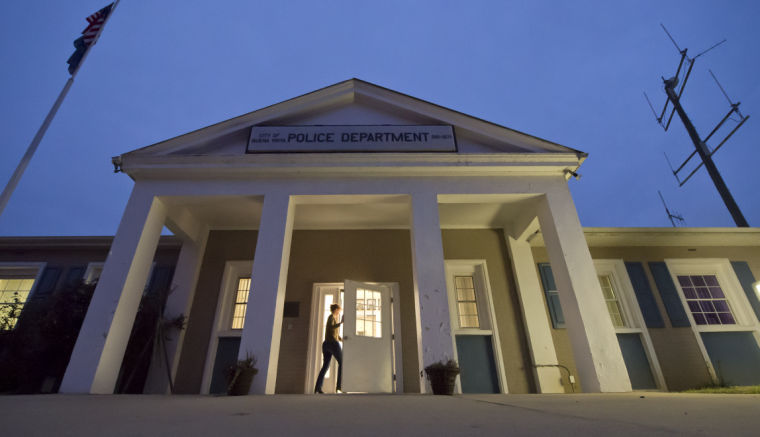 The Buena Vista police headquarters building is another property pledged as collateral to secure the $10 million bond.

Buena Vista Councilman Tim Petrie (right), the only vote against defaulting on the upcoming January payment, speaks to former Councilman Sam Mays. Petrie said the council should make the payment while it negotiates with the insurance company.

Buena Vista’s municipal building is one of the city properties pledged as collateral to secure the $9.2 million bond used to finance the Vista Links golf course.

The Buena Vista police headquarters building is another property pledged as collateral to secure the $10 million bond.

BUENA VISTA — The city council on Monday agreed to stop debt payments on a $10 million bond that was issued in 2005 to finance a municipal golf course.

The council also agreed to seek a settlement with the insurance company that guaranteed bondholders would not lose their investment if Buena Vista ever defaulted. To obtain that insurance a decade ago, the city paid a $400,000 premium and pledged Vista Links, the municipal building and the police station as collateral. The city plans to offer a lump sum that is substantially less than the $10 million it owes to walk away from the deal and keep its real estate.

The insurance company could accept a settlement, or it could foreclose on city hall and possibly force the city into bankruptcy court.

“The bottom line is we made a bad investment, an almost $10 million one, but we weren’t alone,” Mayor Frankie Hogan said, noting that other municipalities bought into the golf boom only to see it bust.

None, though, has defaulted on a bond.

City officials are not certain what will occur if they do not reach a settlement with ACA Financial Guaranty Corp. and the Jan. 15 payment due date passes without remittance. They do know what will happen if they continue to make $330,000 annual payments that will double in July 2016, and will continue for the next 27 years. That’s all the mayor and the council have thought about for a long time, their attorney Brian Kearney said.

“For Buena Vista’s city council, what has been top of mind during the last 10 years is this: What are we going to do about our insurmountable debt? How can we ensure the future for our community? How can we educate our children? How can we promote new business?” Hogan said, reading from a prepared statement.

Only one woman spoke before the council voted. “Tell me what this is going to do to our town of 6,000 residents?”

“It depends on ACA,” Hogan said.

The debt is in the form of a revenue bond that was issued by the city’s recreational authority, though the council pledged assets to secure it. The financial instrument differs from a general obligation bond, guaranteed by a locality’s general fund, in which the state would seize local funds to satisfy the debt. The insurance company is obligated to pay the bond holders, but it can also attempt to minimize its losses by seeking the city’s assets.

All of the council members agreed to seek a settlement “to resolve once and for all the debt of Vista Link.”

Councilman Tim Petrie cast the lone vote against defaulting on the January payment.

“I certainly understand the fiscal stress that has led to this,” he said. “I just think we need to negotiate in good faith. This process seems a little illogical.”

Petrie said that since the money was budgeted, the council should make the January payment while it negotiates with ACA.

Sam Mays was on the council then. He served for 20 years and was at first in favor or the golf course.

“We started buying land for an initial price. Then it was more land. It just kind of got out of hand,” he said. Mays said that he came to oppose the golf course and the debt.

“We tried to negotiate with ACA. They wouldn’t negotiate at all,” he said.

When the council failed to make payments, ACA drew from a reserve fund for a year before striking a forbearance agreement that allowed Buena Vista to pay half the annual payment. ACA pays the other half but tacks the amount onto the principle so that the original $9.2 million debt has grown to more than $10 million.

Meanwhile, Buena Vista is considered one of the most fiscally stressed localities in Virginia. The values of its taxpayers’ homes, cars and incomes are among the lowest in the state, and yet residents’ proportional share of taxes is among the highest.

Vista Links was viewed as an economic development project that would move the city away from its industrial base and spur commercial and residential development while attracting visitors and their money.

“In the 1990s we were struggling to find an economic driver to enhance our aging housing base and diversify our economy,” Hogan said. “So we hired some consultants who showed city council projected numbers for a golf course that exceeded reality. Little did we know. But we should have.”