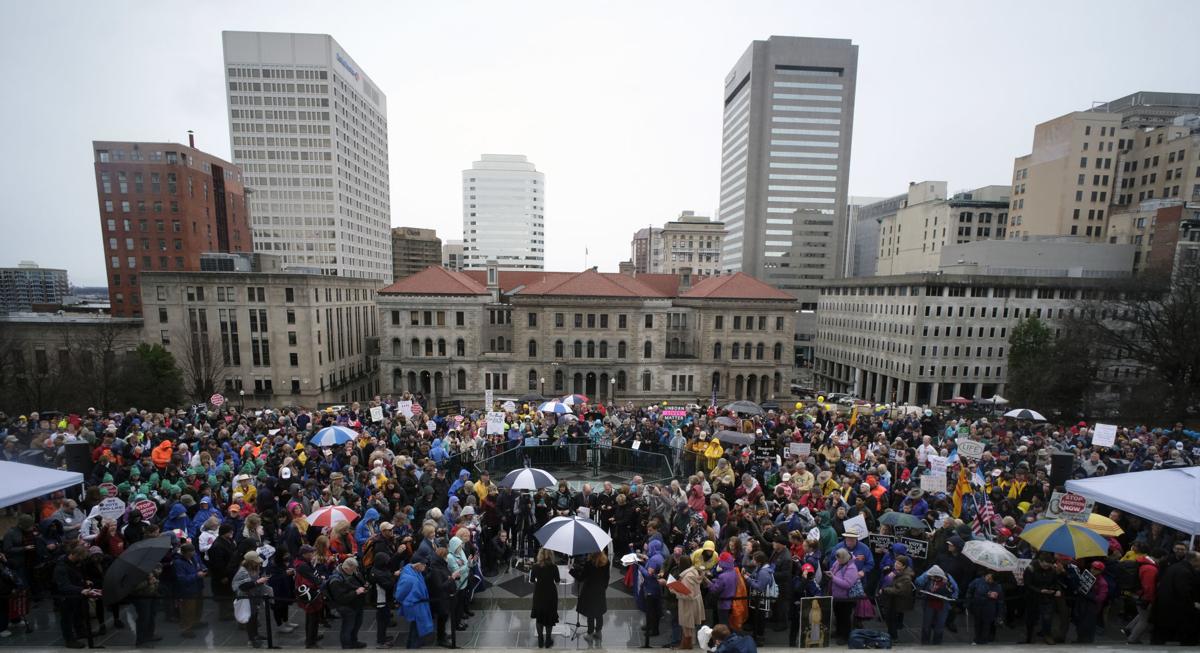 Part of the crowd gathered for the Virginia March for Life rally outside the Virginia State Capitol in Richmond on Feb. 13. Inside, new Democratic majorities were moving ahead with bills to remove restrictions on abortion. 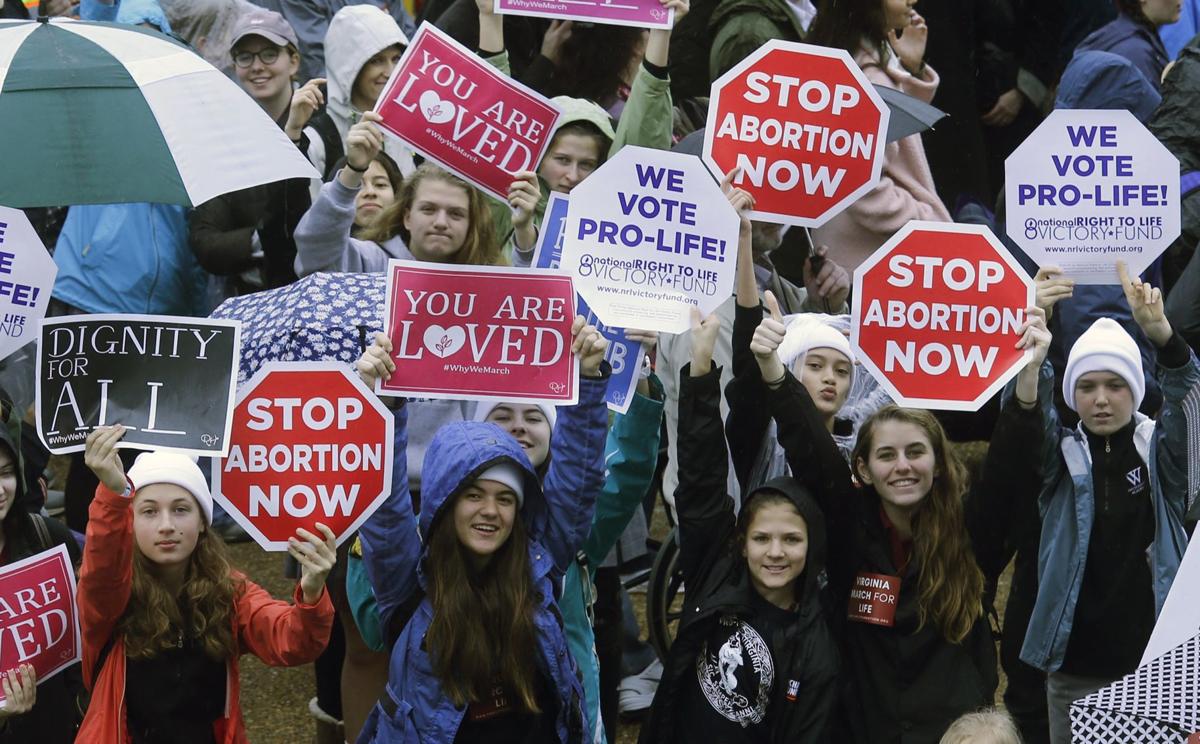 Part of the crowd gathered for the Virginia March for Life rally outside the Virginia State Capitol in Richmond on Thursday. 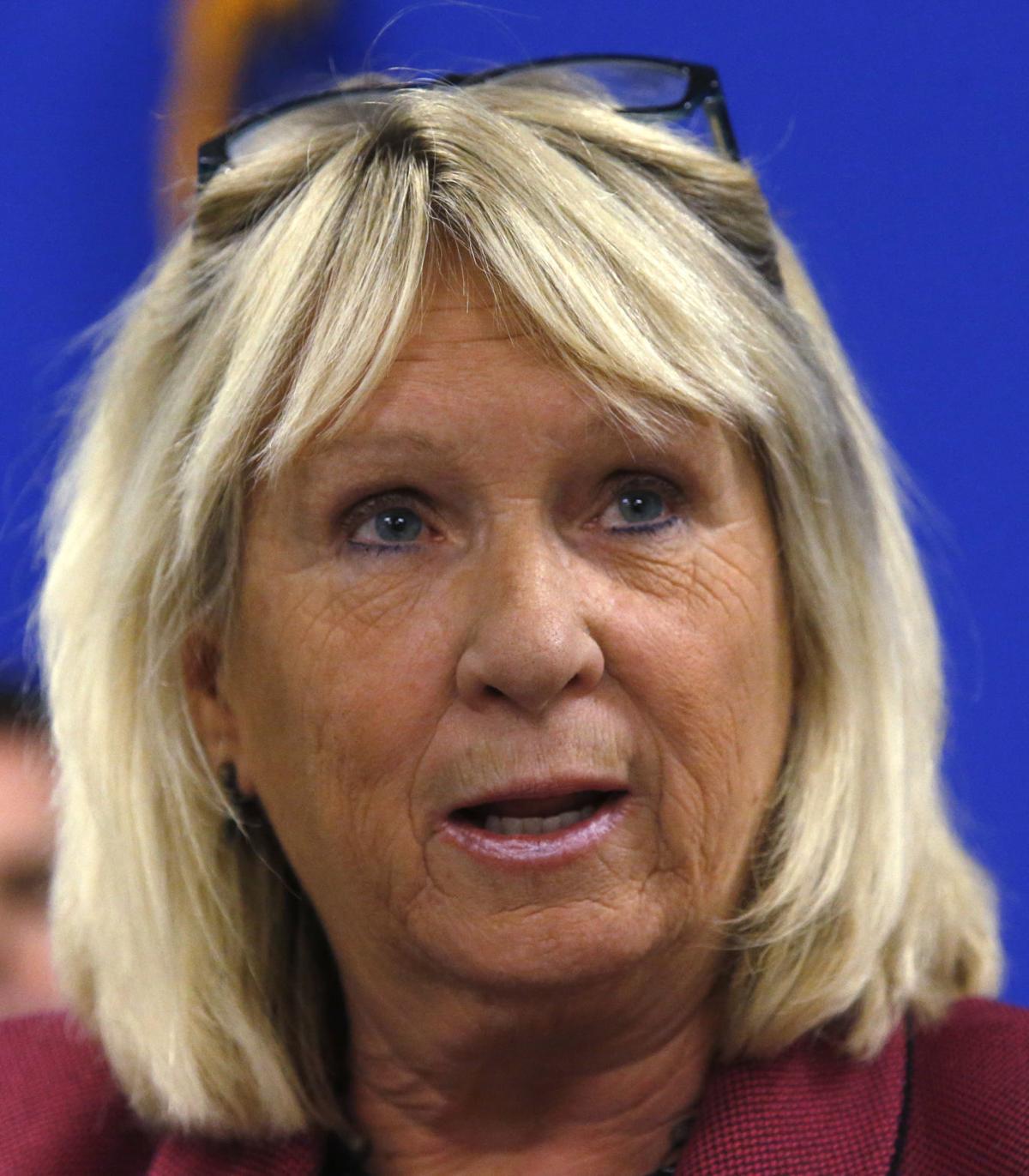 Part of the crowd gathered for the Virginia March for Life rally outside the Virginia State Capitol in Richmond on Feb. 13. Inside, new Democratic majorities were moving ahead with bills to remove restrictions on abortion.

Part of the crowd gathered for the Virginia March for Life rally outside the Virginia State Capitol in Richmond on Thursday.

RICHMOND — With Virginia poised to roll back abortion restrictions, thousands of anti-abortion advocates descended on the Capitol Thursday to voice their opposition to legislation moving through the General Assembly.

“We need you to stand for life and stand behind us as we fight this battle with you,” Del. Kathy Byron, R-Bedford, told the crowd gathered in front of the Capitol building.

Expanding abortion rights was on the list of top agenda items for newly empowered Democrats.

“Our cause faces the most challenge since Roe [v. Wade] was decided 47 years ago,” Byron said. “Every statewide office in Virginia and majorities in both chambers of the Capitol are now occupied by individuals who are emphatically and unapologetically pro-abortion.”

Both chambers already have passed a legislative package that would repeal a requirement for women to receive an ultrasound and scrap laws that mandate that women seeking an abortion wait 24 hours and undergo counseling that opponents described as “biased” and medically unnecessary. The changes also would expand the categories of health professionals who can perform abortions.

“They want it anytime, anywhere, and they want you to fund it,” Sen. Steve Newman, R-Lynchburg, told rally attendees.

Republican legislators have watched as the legislation has moved along, not having enough votes to stop the bills dismantling abortion restrictions they’ve put in place over the past two decades. Sen. Bill Stanley, R-Franklin County, before the vote on the Senate floor last month, broke down in tears after a speech about his daughter dying soon after her birth.

“Over the last few years, you’ve heard of some of the bills we’ve passed, and we have done the right thing for many years,” Newman said.

Thousands of people carrying signs marched around the Capitol in the rain. Republican legislators stood at the top of the steps of the Capitol building to thank the people for continuing to fight against abortion.

“Now, with so much of the progress we’ve made reversed, we must stand stronger than ever,” Byron said.

Police did not release an estimate of the crowd size, but it was visibly smaller than a similar gathering last year, when Virginia became the center of controversy over abortion-related legislation. The legislature heard a bill that would have removed some restrictions on third-trimester abortions, and Gov. Ralph Northam, a Democrat, made comments during a radio interview that some of his opponents interpreted as an endorsement of infanticide.

Instead of running away from the issue, Democrats ran on it during last year’s election.

“Medical decisions should be between a woman and her health care providers,” said House Majority Leader Charniele Herring, D-Alexandria, the patron of the House bill to expand abortion rights. “Medical professionals know the proper protocol for each individual patient, not politicians.”

Rally seeks to draw attention back to abortion as election issue

RICHMOND — Sen. Bill Stanley said that when his wife saw her doctor six months into a pregna…

Sadly, the misogynist Forced-Birthers (aka so-called, “Pro-Lifers) are still trying to send women back to the Dark Ages by stripping away our bodily autonomy, which is our most basic rights to our lives as women. Reproductive rights are absolutely critical for women’s advancement and equal participation in society and it is critical that we fight to protect our most basic rights from those who seek to take them away. It’s so sad that in the 21st Century; there are still those who keep trying to pass oppressive laws that destroy women’s lives and even kill us, which is exactly what anti-abortion laws do to women. And, just because there are women who agree with this agenda, does not make this any less anti-woman. One does not need to be a man to be a misogynist, as we see with these “women” in these photos. They are traitors to other women. But we will prevail in this struggle to maintain our bodily autonomy from those who seek to deny us our most basic rights.

Conservative "Evangelical" Republicans....please let me try to explain something here....and this also applies to the national "abortion debate", as well. Part of the Republican Party's "Conservative Values" absolutely include rights to Personal Freedom, Personal Individual Liberties, Personal Religious Liberties....and the Right To Self Determination. Easy enough...NOW..

1) Who makes the decision for a Woman to get pregnant??

2) Who makes the absolute final decision for a Woman to HAVE an abortion???

3) Who absolutely decides the fate of that fetus or child??

Do you think it's the Supreme Court??

Do you think it's Ralph Northam??

Do you think it's the Democratic Legislators

Do you think it's us "Baby Killin' Libtards??

Of Course Not...ultimately, these are the Mother's decisions to make.

So as a Republican why are you an advocate for taking away a Woman's "Conservative Values", which include Rights to Personal Freedom, Personal Individual Liberties, Personal Religious Liberties....and the Right To Self Determination?

OH....so these are not the Rights you agree on, or value??

SOOO..."Conservative Values" are fine...as long as they are the ones you agree on. OK...I get it. Do you?

IF YOU WANT WOMEN TO STOP HAVING ABORTIONS< GO TALK TO THE WOMEN WHO ARE MAKING THE DECISION TO HAVE THE PROCEDURE DONE!!!

Look at all the upper-middle-class white girls in the pictures -- especially the picture that was actually printed in the print edition of the newspaper. They'll get their safe abortions even if it's outlawed. I wonder how many of them have already had one.