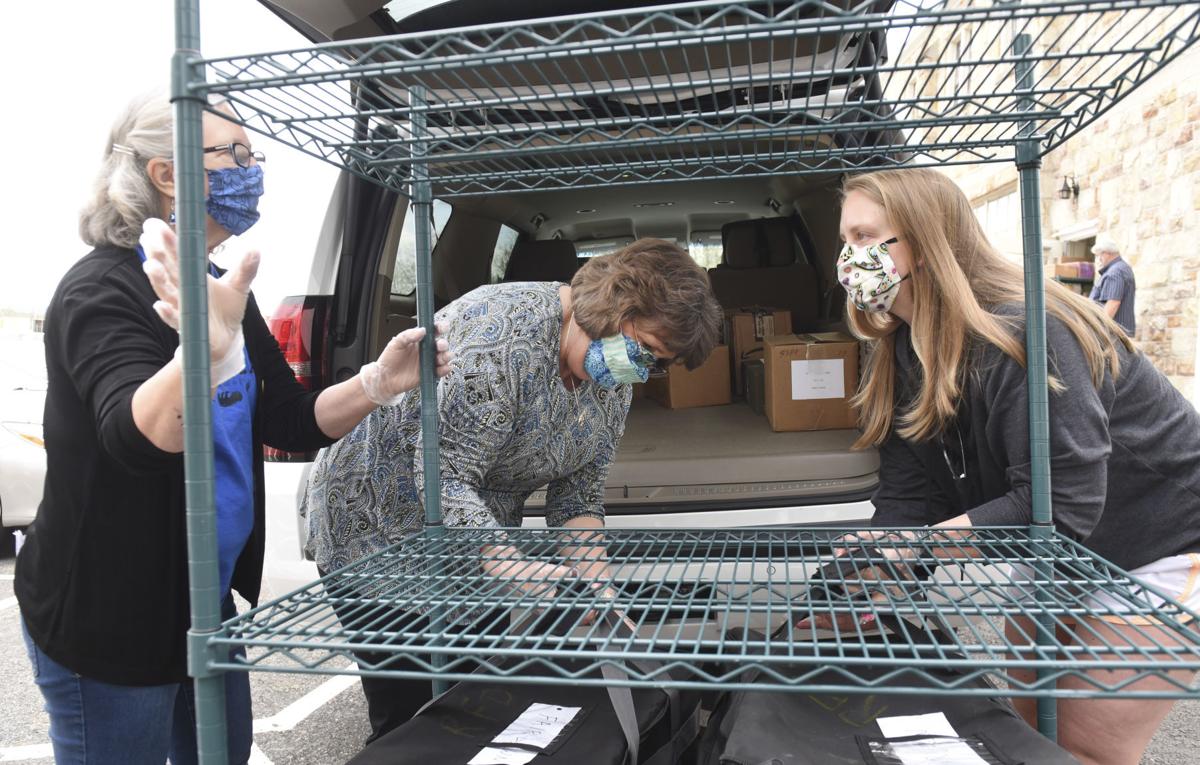 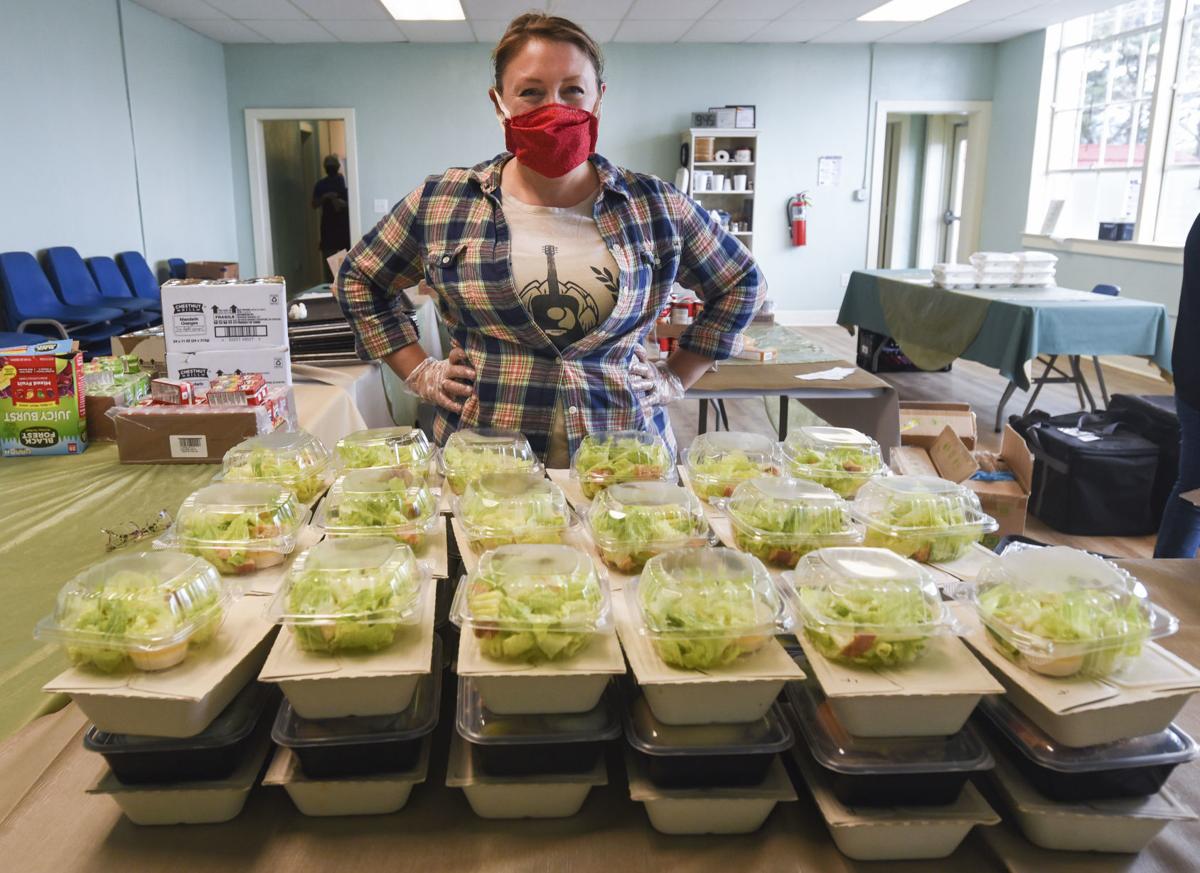 Rachel Doyle, owner and chef at HazelBea Catering, stands Wednesday with the meals she prepared in partnership with Blacksburg’s Millstone Kitchen, for the Radford-Fairlawn Daily Bread food delivery service. 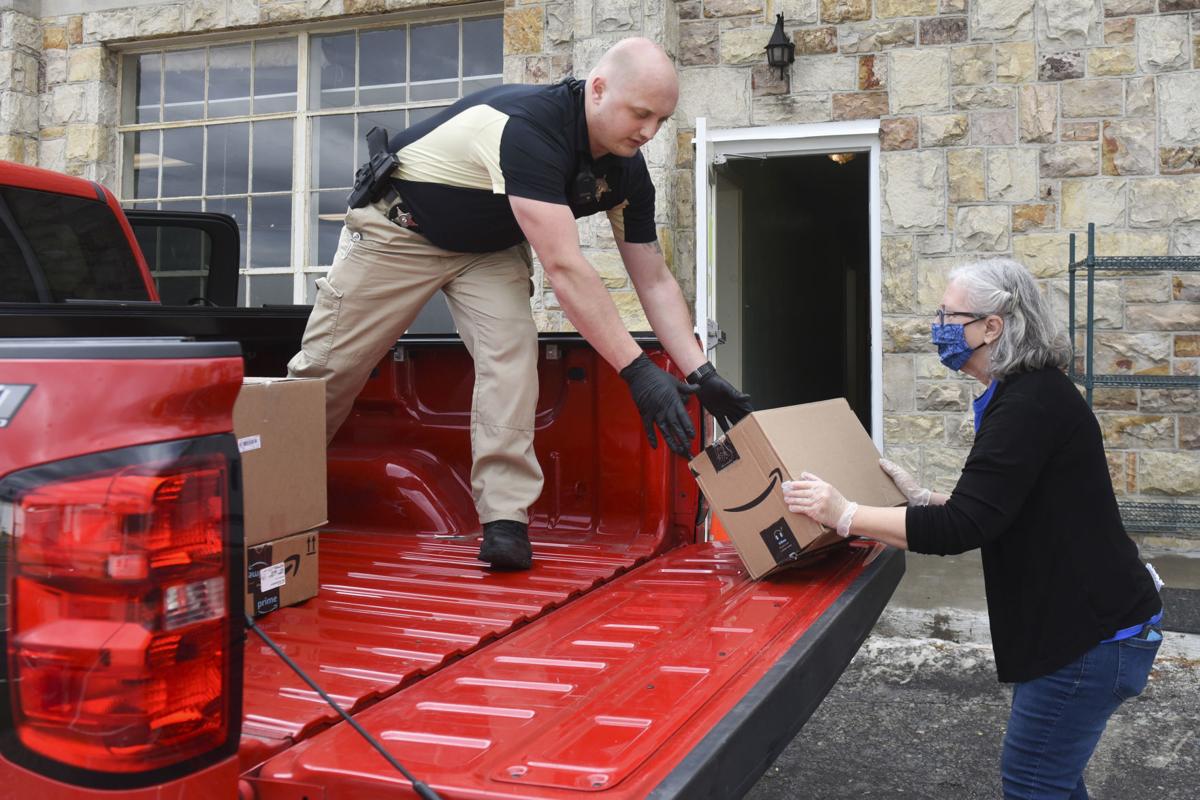 Dora Butler, program manager at Radford-Fairlawn Daily Bread, hands a box of non-perishable foods to Deputy Jeff Revine of the Radford City Sheriff’s Office, who will be delivering the food to local residents. 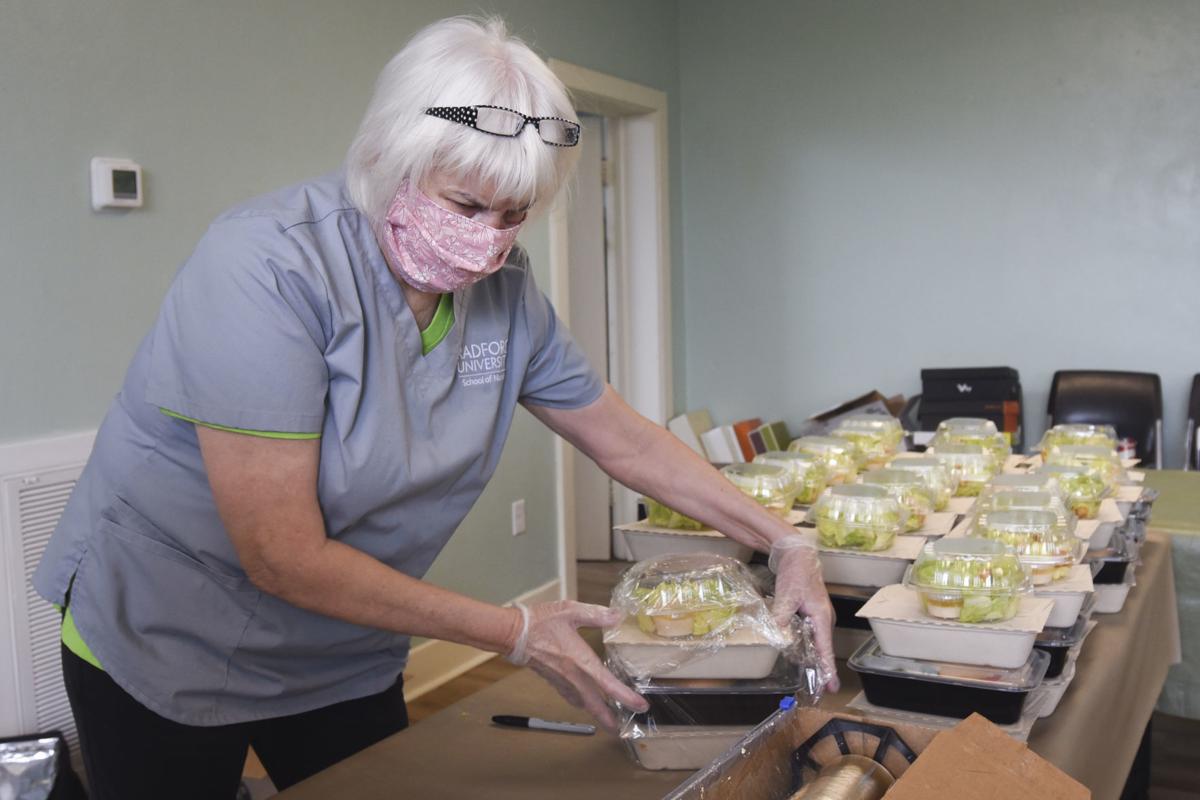 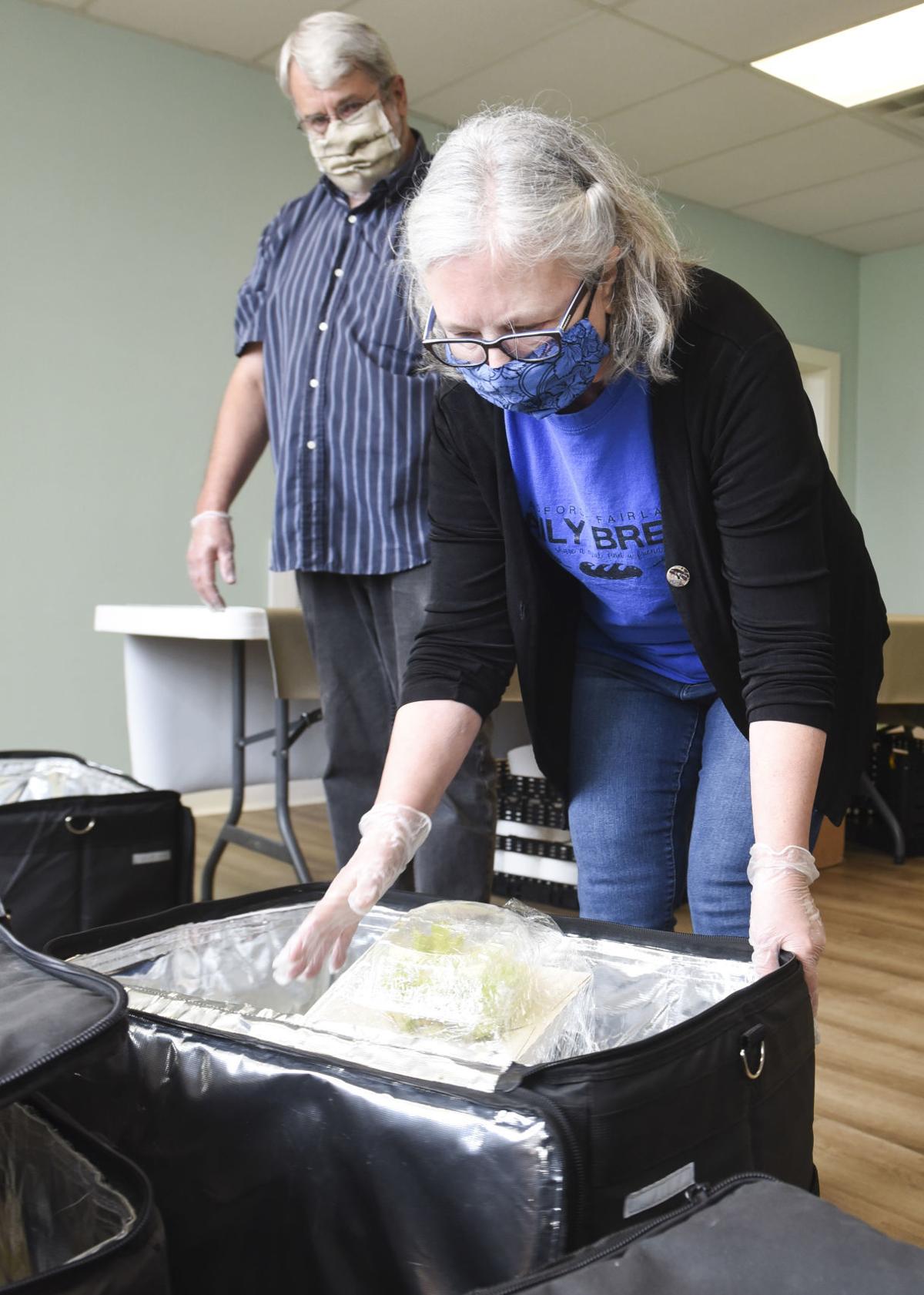 Rachel Doyle, owner and chef at HazelBea Catering, stands Wednesday with the meals she prepared in partnership with Blacksburg’s Millstone Kitchen, for the Radford-Fairlawn Daily Bread food delivery service.

Dora Butler, program manager at Radford-Fairlawn Daily Bread, hands a box of non-perishable foods to Deputy Jeff Revine of the Radford City Sheriff’s Office, who will be delivering the food to local residents.

RADFORD — Various nonprofits and community stakeholders in the New River Valley are coming together to help feed those in need.

The COVID-19 pandemic is putting a strain on local businesses and nonprofits, but that isn’t stopping some from helping families in dire straits.

Radford-Fairlawn Daily Bread — which serves meals at its Second Street location and through its Meals on Wheels program — has had to adapt to how it serves its patrons as state mandates have tightened.

Daily Bread Program Director Dora Butler said the group initially switched to curbside pickup before it became too much of a health risk for volunteers and the people they serve. Now those who ate on-site receive 10 meals through a new delivery system every Wednesday, while Daily Bread still maintains its regular Meals on Wheels program.

The group, founded in 1992, typically serves approximately 500 meals a week. Butler said they are still serving roughly 100 people in the community, but the needs have changed. This past week, it did 745 meals, thanks to some additional help.

Through donations and volunteering — largely from local businesses — Daily Bread has been able to make ends meet, despite losing most of the food shipments it was receiving from Virginia Tech and Radford University.

Butler said the two schools donate some of their leftover food to the kitchen, but without students on campus, deliveries have gone from four times a week to just one.

HazelBea owner Rachel Doyle is serving meals through the newly founded program, Neighbors in Need, a donation-based effort her business and Millstone came up with due to the pandemic.

She said it helps her pay employees while there is no work, helps Millstone keep its doors open and feeds those who need food. Doyle said the arrangement with the Radford food bank will last at least through April.

Additionally, Daily Bread purchased enough nonperishables from Feeding Southwest Virginia to last the organization through the month. A $2,000 donation from the local United Way, along with other private donations has been instrumental as well.

A Radford sheriff’s deputy, Robert Thacker, and Michelle Mullins, co-owner of Mullins Funeral Home & Crematorium, are helping to deliver the meals each Wednesday.

Thacker recently started the program to assist those most susceptible to the horrors of COVID-19: Project: Help a Neighbor. The initiative aims to deliver groceries and prescriptions and other items to those who cannot leave their home.

“We are really trying to put all our efforts into keeping this virus at bay in Radford,” he said Thursday.

Butler, of the Daily Bread organization, said the support from the community has been wonderful.

“My heart is so swollen that I am coming to tears frequently. It’s really amazing. That’s the God’s honest truth,” she said Thursday.

Those who have been receiving food from Daily Bread are also very grateful to not be forgotten right now, she said.

“One gentleman that has come to the dining room for years, yesterday after his box was delivered, came to me in tears saying ‘thank you for remembering us’,” Butler said.

She recalled another heartwarming message from a mother who can’t work right now because her children are not in school.

In Blacksburg, another nonprofit, YMCA at Virginia Tech, has also partnered with the Salem-based food bank Feeding Southwest Virginia and the USDA to help keep some of its residents from going hungry as well.

The program, Meals on Main, is aiming to provide a week’s worth of food to children across the New River Valley. The ready-to-eat meals and snacks can be picked up between 3 p.m. and 6 p.m. on Monday and Friday at the YMCA Thrift Shop at 1000 N. Main St. in Blacksburg.

“When all of this came out, with the whole crisis, we decided we really wanted to do something now,” Laureen Blakemore, the YMCA at Virginia Tech’s director of community engagement, said. “That need was definitely still there.”

During the school year, the YMCA at Tech runs an after-school feeding program at Price’s Fork Elementary School just west of Blacksburg town limits. During summers, the organization runs a mobile pop-up program that brings foods to underserved areas in the region.

Blakemore said Meals on Main supplements work done by Montgomery County Public Schools, which has during the outbreak used school buses to deliver meals once a day to a number of its students.

“This is more of an evening meal and the snacks go with that,” she said.

Blakemore said the program saw a strong turnout Monday, when food was delivered to about 53 children.

“Everything we had, except for four meals, disappeared within those three hours,” she said.

“These are the kinds of creative community partnerships that help fill the gap,” Irvine said. “This helps lessen pressure on families to provide some of these meals … This is how we’re finding a way to creatively deal with the current COVID-19 situation.”

Donations to the Radford-Fairlawn Daily Bread can be made on its website, www.radfordfairlawndailybread.org. Neighbors in Need donations can be made at www.millstonekitchen.org and for the YMCA at vtymca.org.

Those in need of services can also visit the websites mentioned above or call Daily Bread at 838-2210, and the Radford city Sheriff’s Office at 731-5501, or by emailing Thacker directly at robert.thacker@radfordva.gov.