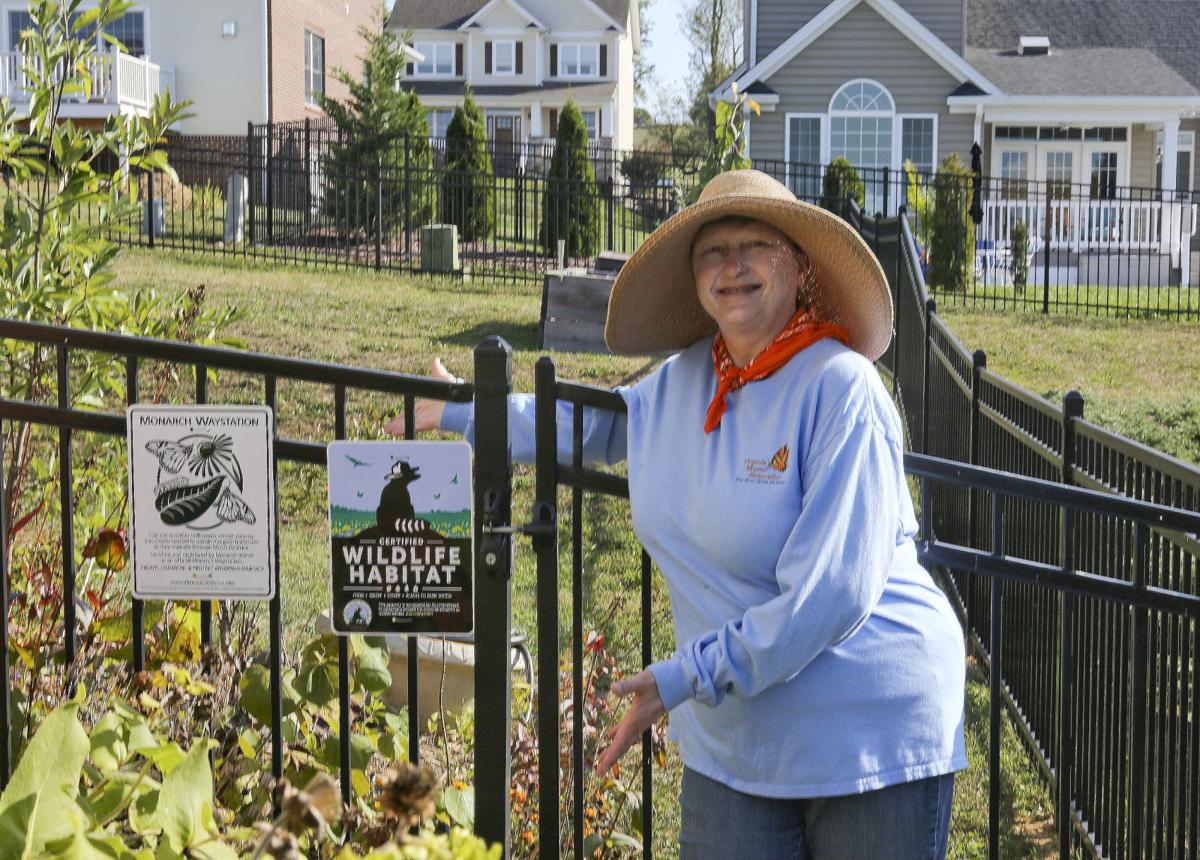 Rebekah Paulson, president of the Villas at Fiddler’s Green Homeowner’s Association has made her yard into a certifiable wildlife habitat. 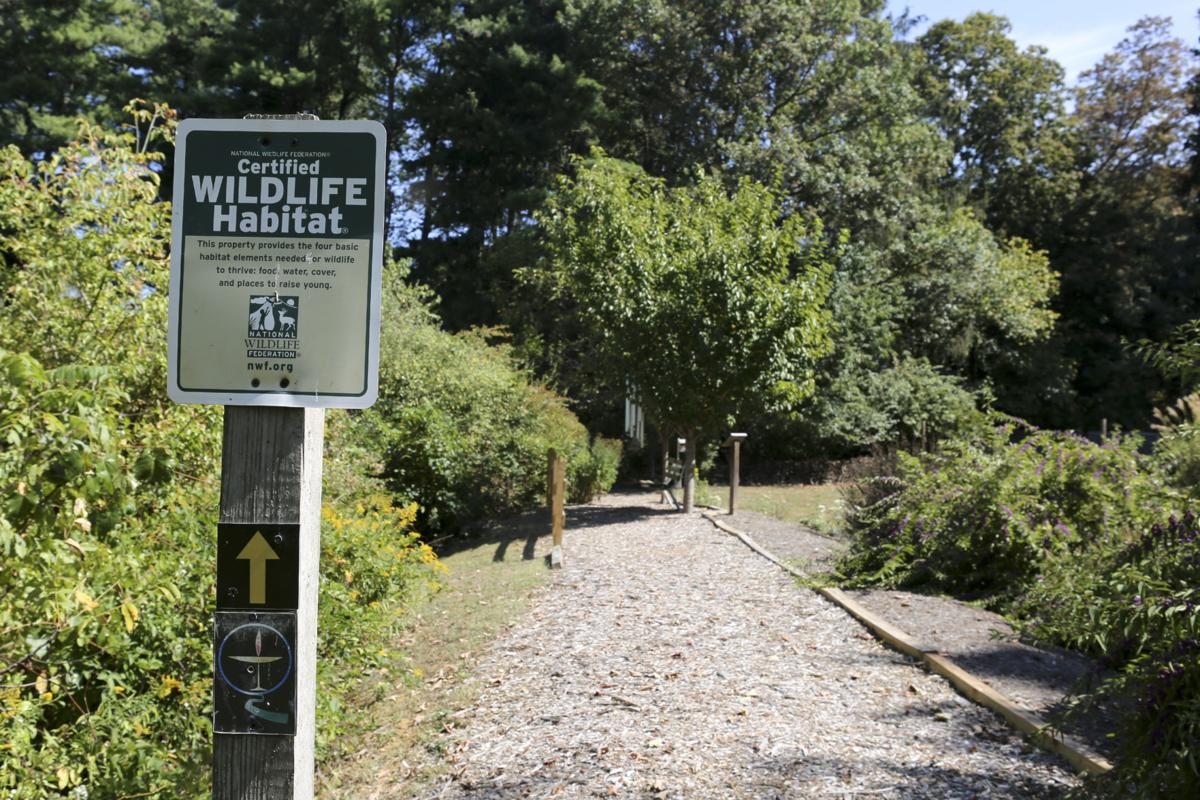 The Unitarian Universalist Congregation’s nearly six-acre garden blends meadow, woodland, and a small pond with meditation areas and a labyrinth. 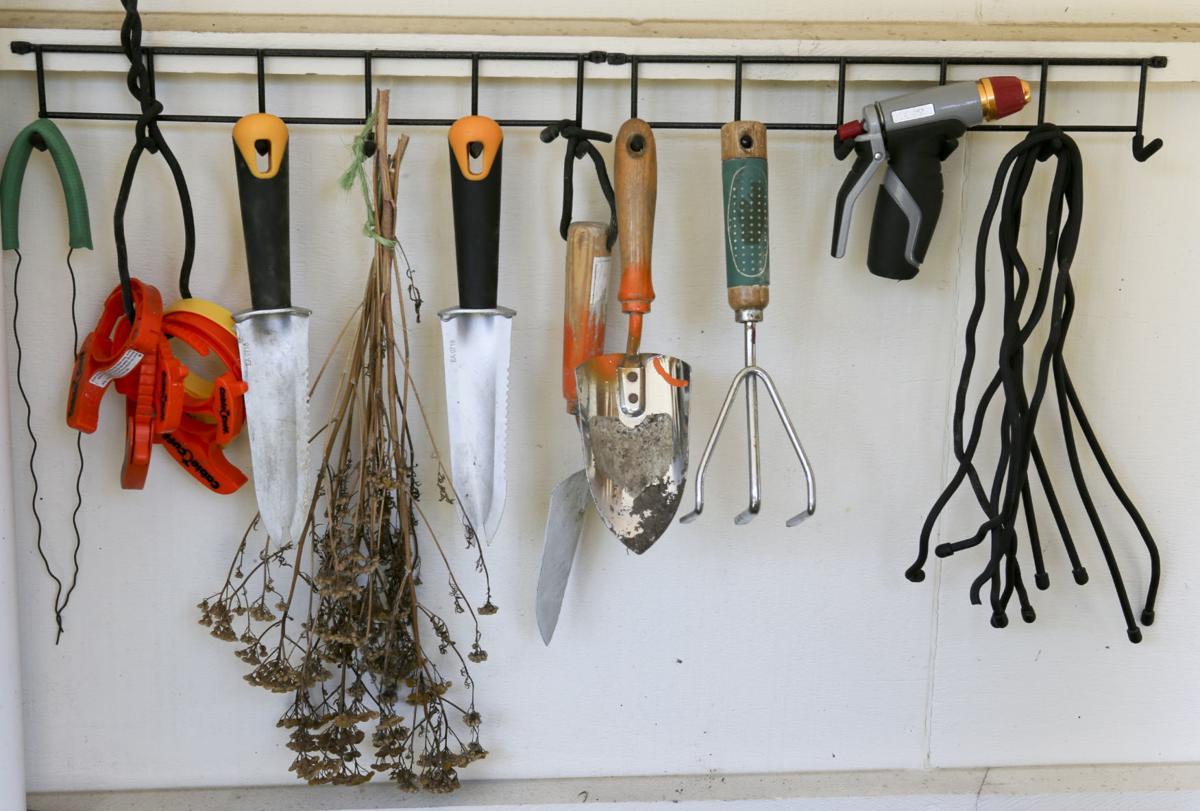 The Unitarian groundskeepers have congregational work sessions on occasional Saturdays. 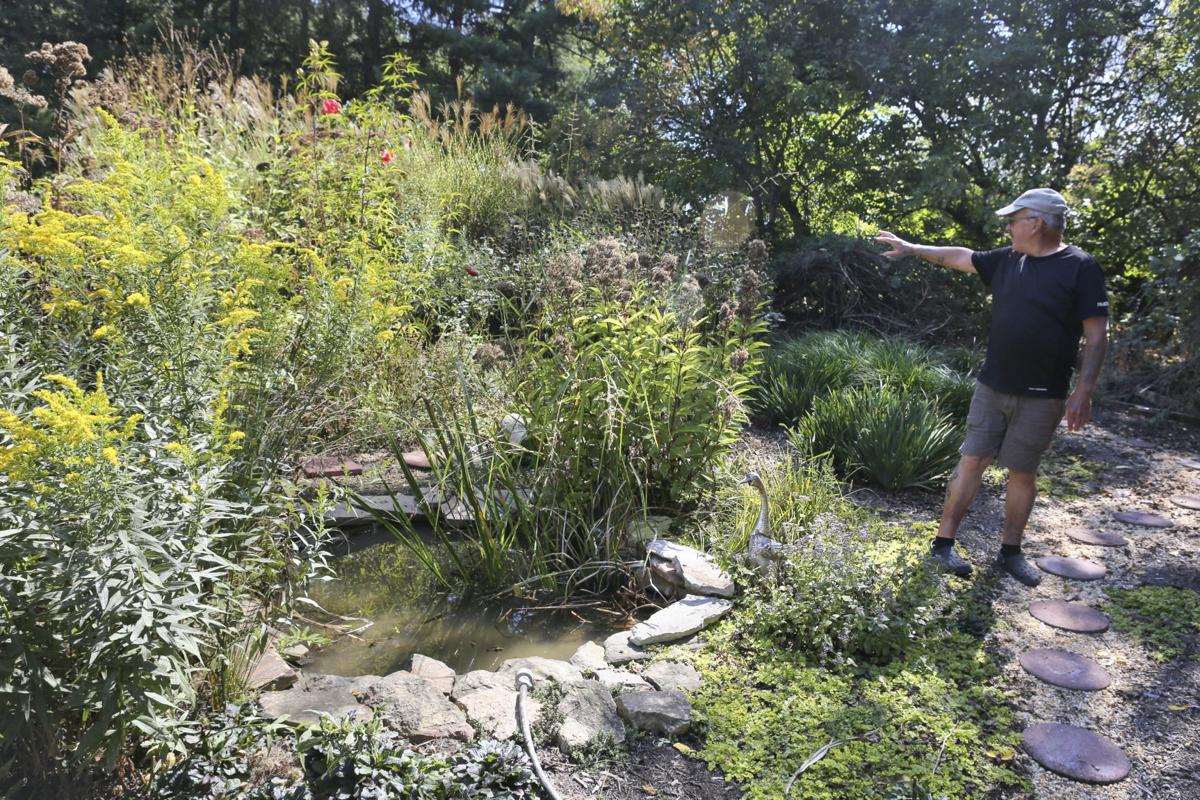 Unitarian Universalist Congregation’s Susan Baker and George Lally, right, have had the tract certified both as a wildlife habitat as well as an official monarch waystation. 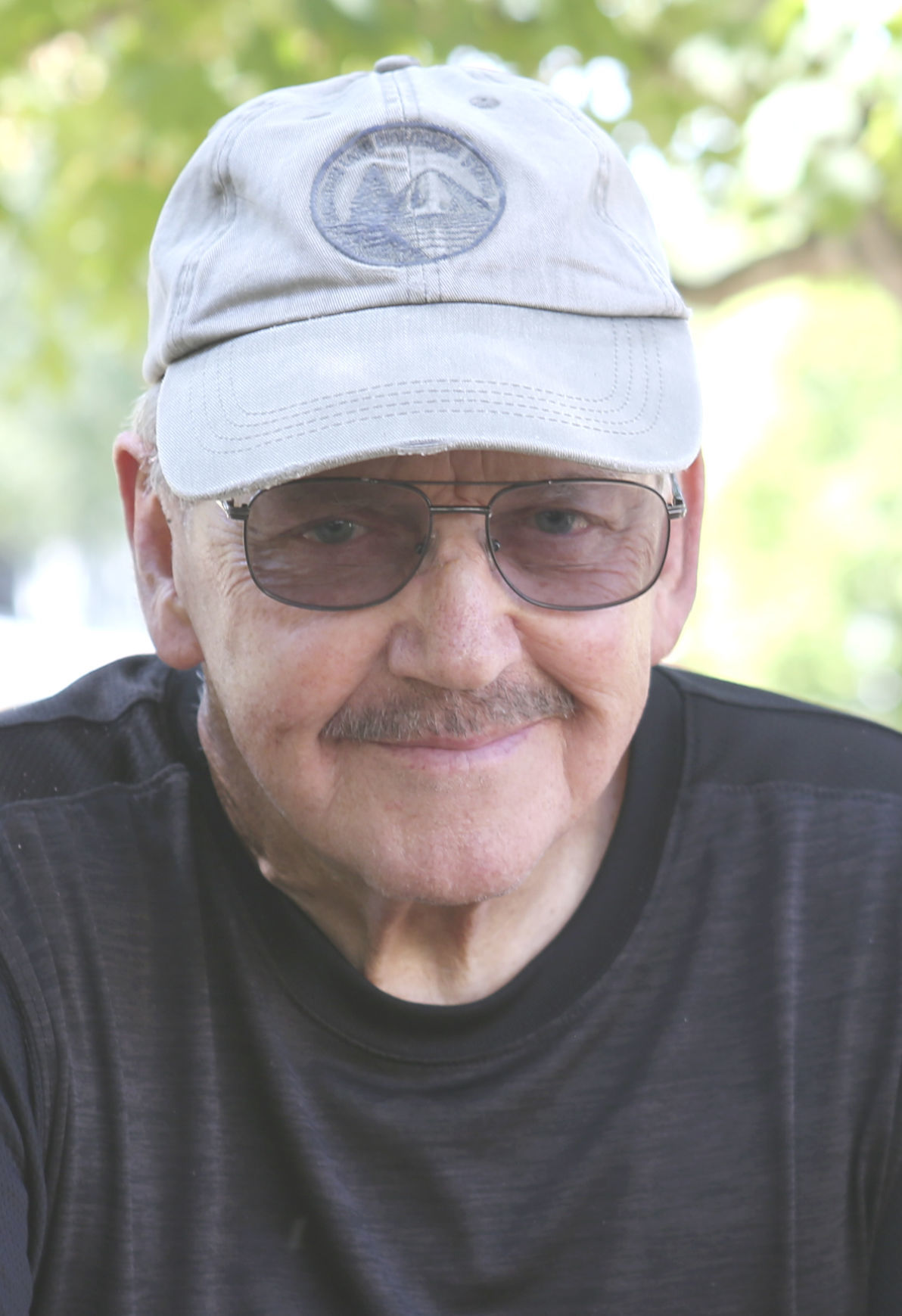 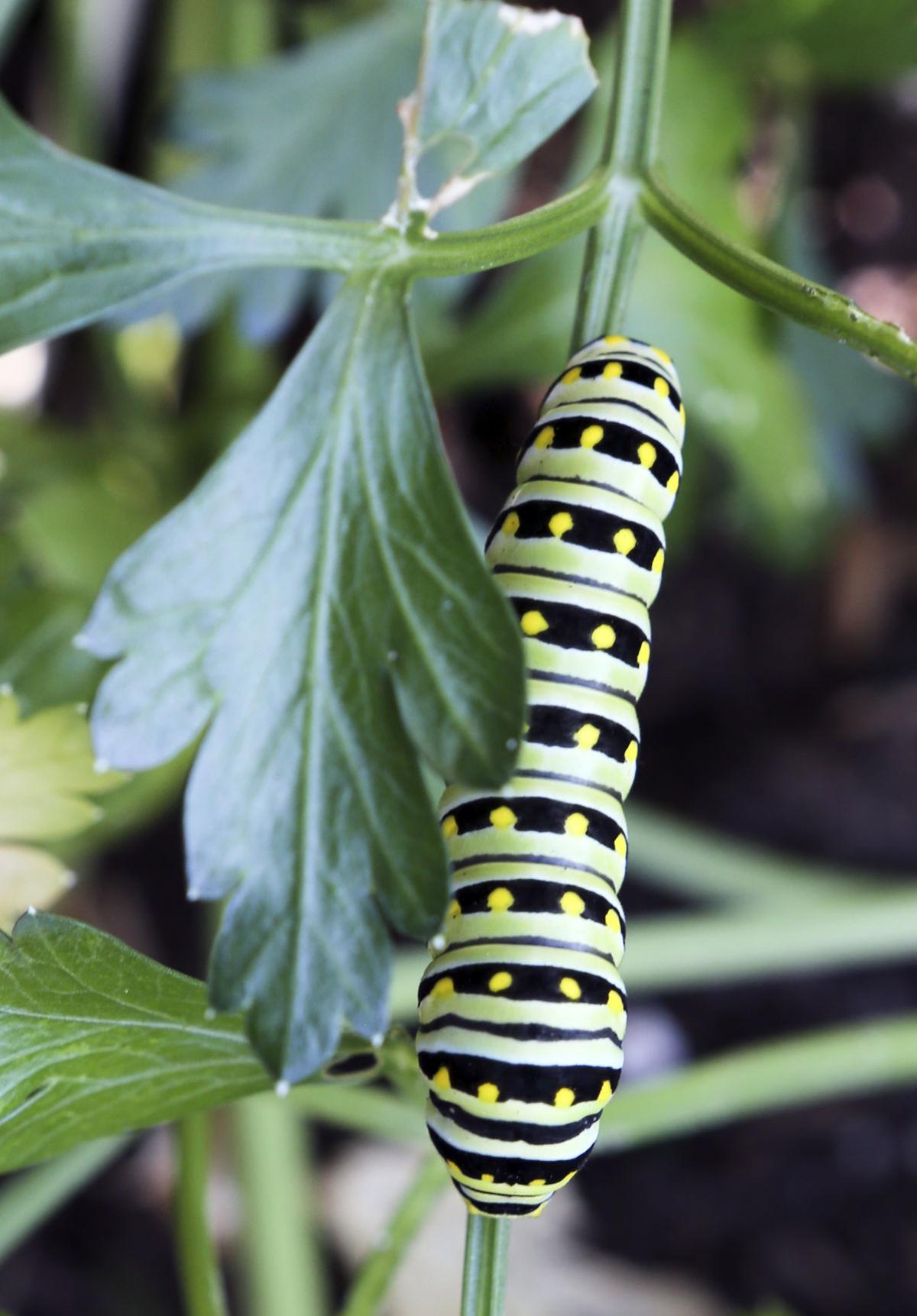 A caterpillar on parsley in the garden of Rebekah Paulson. 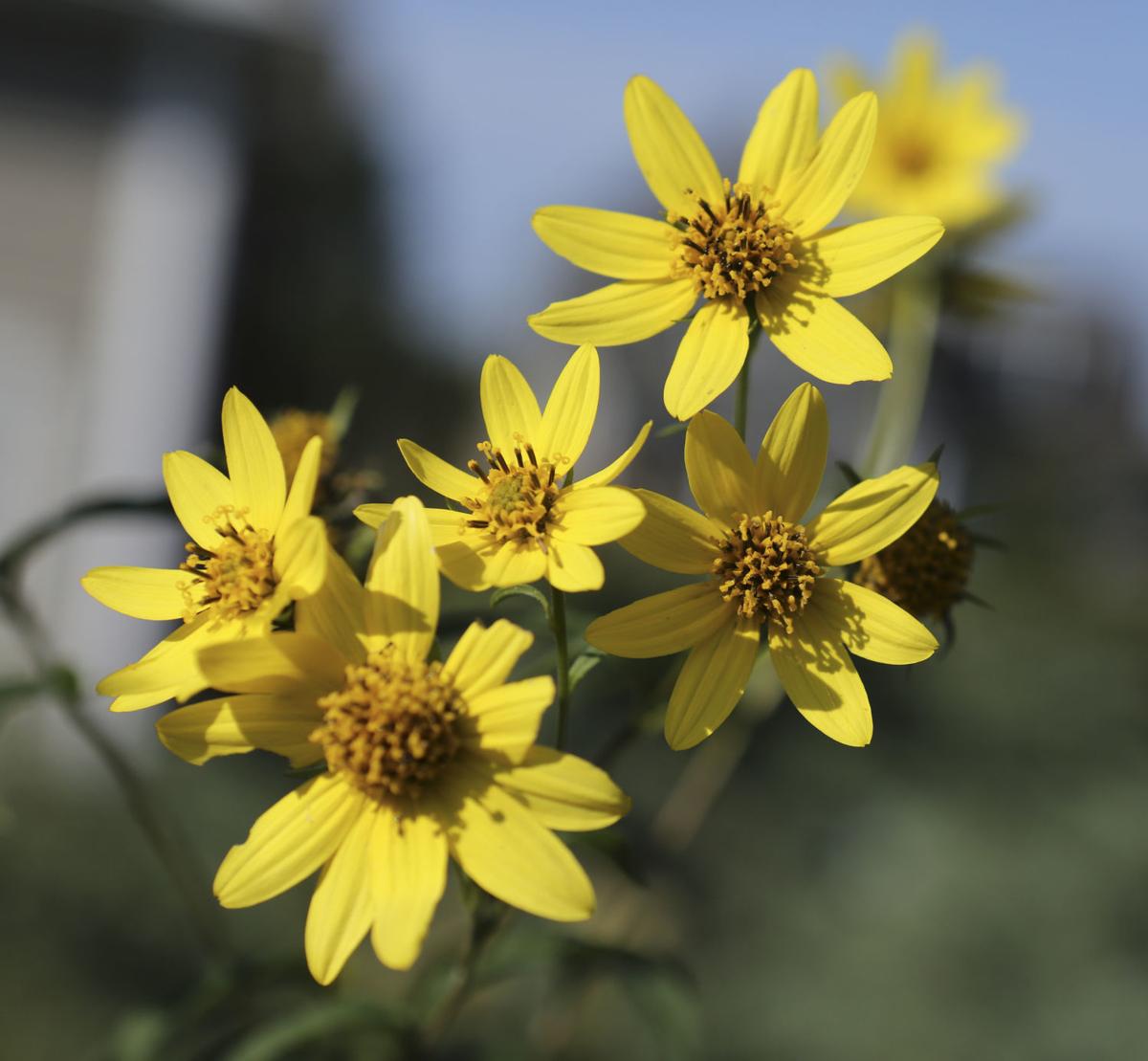 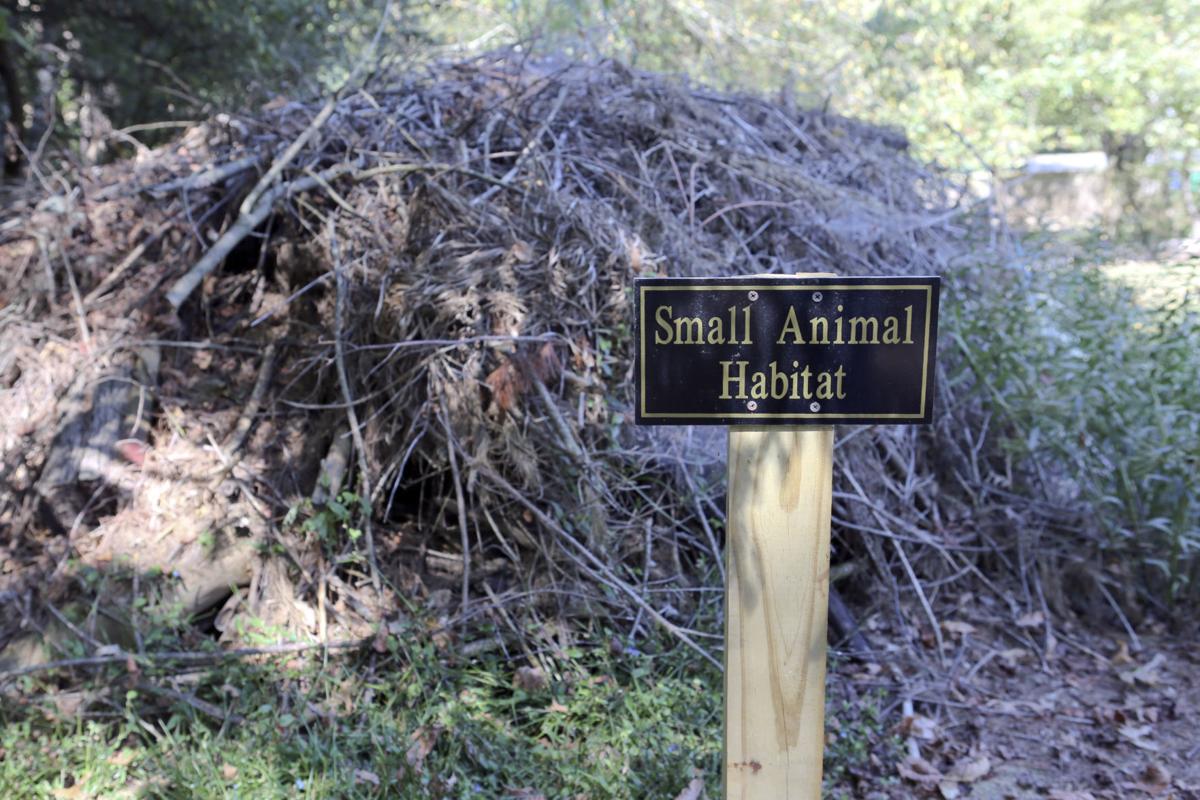 Rebekah Paulson, president of the Villas at Fiddler’s Green Homeowner’s Association has made her yard into a certifiable wildlife habitat.

The Unitarian Universalist Congregation’s nearly six-acre garden blends meadow, woodland, and a small pond with meditation areas and a labyrinth.

The Unitarian groundskeepers have congregational work sessions on occasional Saturdays.

Unitarian Universalist Congregation’s Susan Baker and George Lally, right, have had the tract certified both as a wildlife habitat as well as an official monarch waystation.

A caterpillar on parsley in the garden of Rebekah Paulson.

BLACKSBURG — As soon as Rebekah Paulson and her husband Mark Pierson moved into their brand-new house in the town’s Fiddler’s Green subdivision four years ago, they began ripping out shrubbery the landscaper had planted.

“Barberry, nandina, and Chinese holly aren’t the best food for local birds and bugs,” Paulson said. “Even before our closing, I started transplanting my own native plants here to make it a certifiable wildlife habitat.”

Paulson and Pierson’s small lot, which was certified as a wildlife habitat in summer, joins a handful of other wildlife habitats within Blacksburg town limits, refuges for migrating birds and butterflies and small critters displaced by spreading development. Disturbed that 9 out of 10 monarch butterflies and 1 in 4 birds have disappeared in the last 50 years, partially from lack of habitat, Paulson says she is determined to do what she can to support their survival. She’s planted three types of milkweed to feed the monarchs as well as American holly, service berry, hawthorn, and numerous varieties of flowers and plants for the birds and bees.

The executive director of the nonprofit advocacy group, Friends of Stadium Woods, Paulson has even grown a white oak from an acorn she picked up under a 400-year old tree in Virginia Tech’s old forest behind Lane Stadium.

To become a certified wildlife habitat through the National Wildlife Federation, Paulson has to provide food for birds, animals, or insects – one of four requirements. She also must offer water, cover, and spaces to raise young, such as tall grasses, dense shrubs, and birdhouses. Cover includes evergreens, bramble patches, dense shrubs, ponds, walls, and brush piles. The garden should be sustained without using pesticides and herbicides.

“Those chemicals are toxic to you as well as the plants and animals,” Paulson said.

Paulson’s entire lot measures only a fifth of an acre, not even the size of Walmart Supercenter’s grocery section. Yet she manages to provide all these features and still has space for a lawn, some vegetables, and sitting spaces where she and Pierson can enjoy watching the birds and butterflies.

On the other side of town, the Unitarian Universalist Congregation’s nearly six-acre garden blends meadow, woodland, and a small pond with meditation areas and a labyrinth for humans. Like Paulson, the two volunteer groundskeepers, Susan Baker and George Lally, have had the tract certified both as a wildlife habitat as well as an official monarch waystation.

“We’re open to all our human neighbors as well,” said Lally. “Come walk our circumferential meditation path. Bring your dog. And your pooper scooper.”

The habitat includes 25 birdhouses, bird feeders, flower gardens, berry-producing shrubs and brambles, and a quarter-mile trail with benches, and two picnic areas for humans. The Unitarian’s garden has something else animals love – a critter condo. The condo is actually a brush pile big enough to bury a half-ton pickup truck. Birds, rabbits, chipmunks, and woodchucks love to hide among the branches or burrow under it.

“We offer sanctuary in many senses of the word,” Lally said. “We may have half a dozen ground hogs. We’ve discouraged them from burrowing under our main building, but otherwise they’re free to live anywhere. I’m also pretty sure we have deer sleeping here; they feed under our apple tree and graze in a nearby field surrounding a radio tower.”

“I think the wildlife habitat owners probably do a good job of educating their neighbors about the purpose of the habitats,” Darnell said.

That is certainly true of Paulson, who is president of the Villas at Fiddler’s Green Homeowner’s Association as well as past president of Southside Garden Club. She is an activist for chemical-free gardening and has persuaded more than one neighbor to allow clover and other nutritional plants to sprout in their lawns.

“I love it that one neighbor says I’ve convinced him to dig his weeds out by hand rather than blasting them with poison,” Paulson said. “It’s better for the bees … and all of us.”

Because her wildlife garden is still getting established in this dry year, Paulson spends every day watering, weeding, and even planting, but she expects it will become self-sustaining when plants reseed and fill in open patches. The Unitarian groundskeepers maintain large flower gardens and a trail, so they are likely to spend several mornings a week on site during growing season. They also have congregational work sessions on occasional Saturdays. About 40 members of the congregation are involved with the habitat in some way, Lally says. The tools hanging on the backside of the church indicate this is a working congregation: rows of shovels, rakes, a cabinet full of trowels, four wheelbarrows, and four lawn mowers.

Evelyn and Gordon Grender, on the other hand, estimate that helpers spend about 12 hours a year on their 29-year-old wildlife habitat on Giles Road. Its paths require maybe 15 minutes to mow, and the Grender’s children clear vines out of the trees twice year, Evelyn said.

“It’s quite overgrown, quite mature now,” she said. “We have deer, possum, chipmunks, squirrels, rabbits, and sometimes a raccoon. The only requirement the town makes of us is that we keep the grass mowed outside our fence.

Since 1973, the National Wildlife Federation (NWF) has been educating and encouraging people to turn their lawns into habitat for birds, butterflies and other wildlife. Habitat is being lost at an accelerating rate. Nearly 500 animal species have gone extinct in the past century. Extinction is nothing new, but the rate today is at least 1000 times faster than before humans came into existence, according to Science Journal.

Every habitat garden is a step toward replenishing resources for wildlife such as bees, butterflies, birds, and amphibians—both locally and along migratory corridors, the NWF claims. A wildlife habitat can be limited to an apartment patio holding flowerpots of butterfly plants and bird feeder, a small bed of native berry-producing shrubs, or a six-acre church meditation garden – it all contributes to the survival of wild species.

For more information on creating a wildlife habitat, see https://www.nwf.org/Garden-For-Wildlife/Create.aspx.