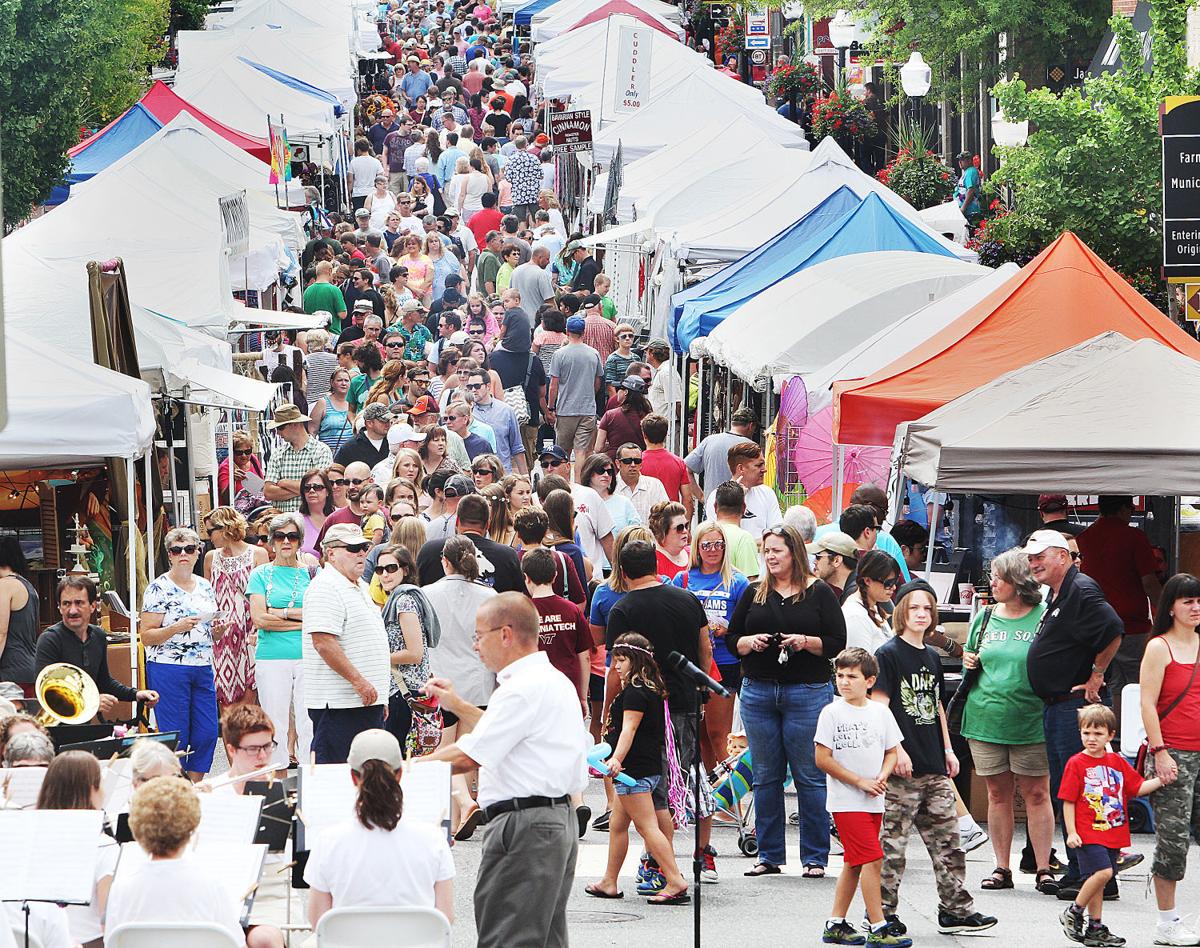 The Steppin’ Out festival’s mission was revised this year, excluding some groups. 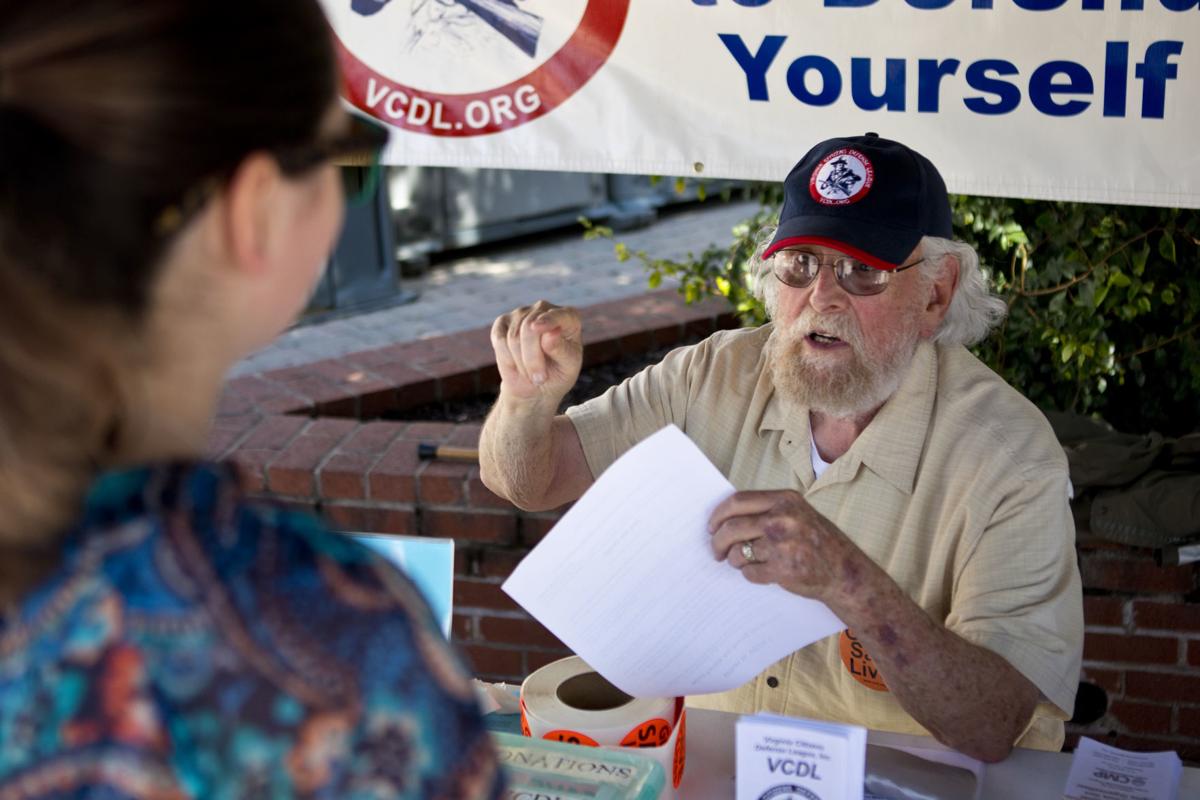 David Hicks shares information about the Virginia Citizens Defense League with a passer-by at last year’s Steppin’ Out festival in Blacksburg. The group is one of several political organizations whose booth applications for the festival were denied due to the event’s redesign.

The Steppin’ Out festival’s mission was revised this year, excluding some groups.

David Hicks shares information about the Virginia Citizens Defense League with a passer-by at last year’s Steppin’ Out festival in Blacksburg. The group is one of several political organizations whose booth applications for the festival were denied due to the event’s redesign.

Blacksburg’s Steppin’ Out festival is steppin’ up its threshold to determine what groups can officially participate in the annual event.

Festival organizers for the first time this year denied a handful of applications for booths at the two-day affair that starts Friday. Those included applications filed by the Virginia Citizens Defense League, a pro-gun group, as well as the Montgomery County Democratic Party.

Downtown Blacksburg Inc., which runs Steppin’ Out, said this week that some groups were denied as part of a recent restructuring of the festival’s mission.

“DBI re-designed the festival this year to create a more family-friendly street fair focused on music, food, drink, visual and performing arts, crafts and games and having widespread appeal to the community, families and attendees,” DBI Director Laureen Blakemore wrote in an email. “The festival redesign simply did not include room for individuals (including political candidates) and organizations whose primary focus is advocacy on political or social causes and issues, regardless of viewpoint or message.”

While Blakemore acknowledged many of those individuals and organizations had been approved in prior years, she described them as not having a “natural fit” within the new festival design due to the nature of their business.

Citizens Defense League President Philip Van Cleave said it’s the first time — at least within the last six years that he recalls the organization attending the festival — his group has been denied a Steppin’ Out booth.

Van Cleave said the recent festival restructuring is a charade put on by DBI simply to oppose a pro-gun rights group.

“They’ve been trying for years to keep us out of there. ... It was a silly move all because they don’t like guns,” he said.

Van Cleave pointed to six new Steppin’ Out zones that he argues were created to ease DBI’s decision.

DBI’s festival committee did create the new zones, according to a February letter from Blakemore. The zones are described as “themed areas where festival goers can explore related activities, learning opportunities, entertainment and more.”

Van Cleave said his organization would be best fitted to the health and wellness zone.

“There were several, but health would have been one of them, because we’re teaching firearm safety,” he said.

The pro-gun group drew opposition at previous festivals when several of its members at Steppin’ Out engaged in open or concealed carry, albeit lawfully, Van Cleave said.

While the organization won’t have a booth, Van Cleave said members still plan to appear at Steppin’ Out in protest.

Van Cleave said members during each day of the festival — Friday and Saturday — will break up into small teams to make their presence known. He said they’ll engage in activities such as handing out “guns save lives” stickers, something the organization typically did in previous years.

“Now we’ll be free to walk around,” he said. “Before we were playing by their rules. We don’t have to play by their rules anymore.”

Van Cleave said his organization has attended Steppin’ Out over the years due largely to the great deal of people who attend the event. He said his group usually talks to event goers about the state’s gun laws and firearm safety and storage.

“It’s a perfect place to reach out to a crowd that probably doesn’t go out to gun shows,” he said.

He said those who disagree with the group’s stances can just ignore them.

“I don’t try to shut down the message. That’s the difference,” Van Cleave said.

Blakemore couldn’t be reached for further comment Tuesday to say which other organizations were denied booths, despite having been approved in previous years.

The Montgomery County Democratic Party, however, confirmed it was denied participation, despite having attended the festival in previous years.

“I was surprised and disappointed by DBI’s decision to disallow political parties and candidates from participating in the Summer Solstice and Steppin’ Out festivals,” party Chairwoman Jenni Gallagher wrote in an email. “The Montgomery County Democrats have participated in both events for years, registering voters, answering questions from the public about voting and elections and providing information on both specific candidates and our party’s overall platform.”

Gallagher called DBI’s move counterproductive, particularly in what she described as a current national atmosphere of political division.

Gallagher said the festivals allowed community members to educate themselves and share ideas on local, regional and state governance.

“They allowed citizens to come together across party lines over local and regional issues — such as I-81, the pipeline and access to health care,” she wrote. “DBI’s decision not only removed that opportunity, it has exacerbated the problem it was trying to solve, as evidenced by the VCDL’s call for protesters.”

The county’s Republican Party was also denied a booth at the festival, according to county GOP Supervisor Chris Tuck.

Tuck echoed much of Gallagher’s points. He said the festival is an effective way for to hand out bumper stickers and signs.

“It’s always been kind of a kick-off to the campaign,” he said. “I always thought it was a good thing.”

Tuck said he also doubts how effective DBI’s new policies will be when members of those organizations can still make an appearance.

“They’re using public streets,” he said. “Those individuals are going to come there, wear their shirts, caps and stickers. I don’t know how a booth would alter that in any way.

“I am concerned that this is restricting free speech on public streets. That is concerning to me that we are doing that.”