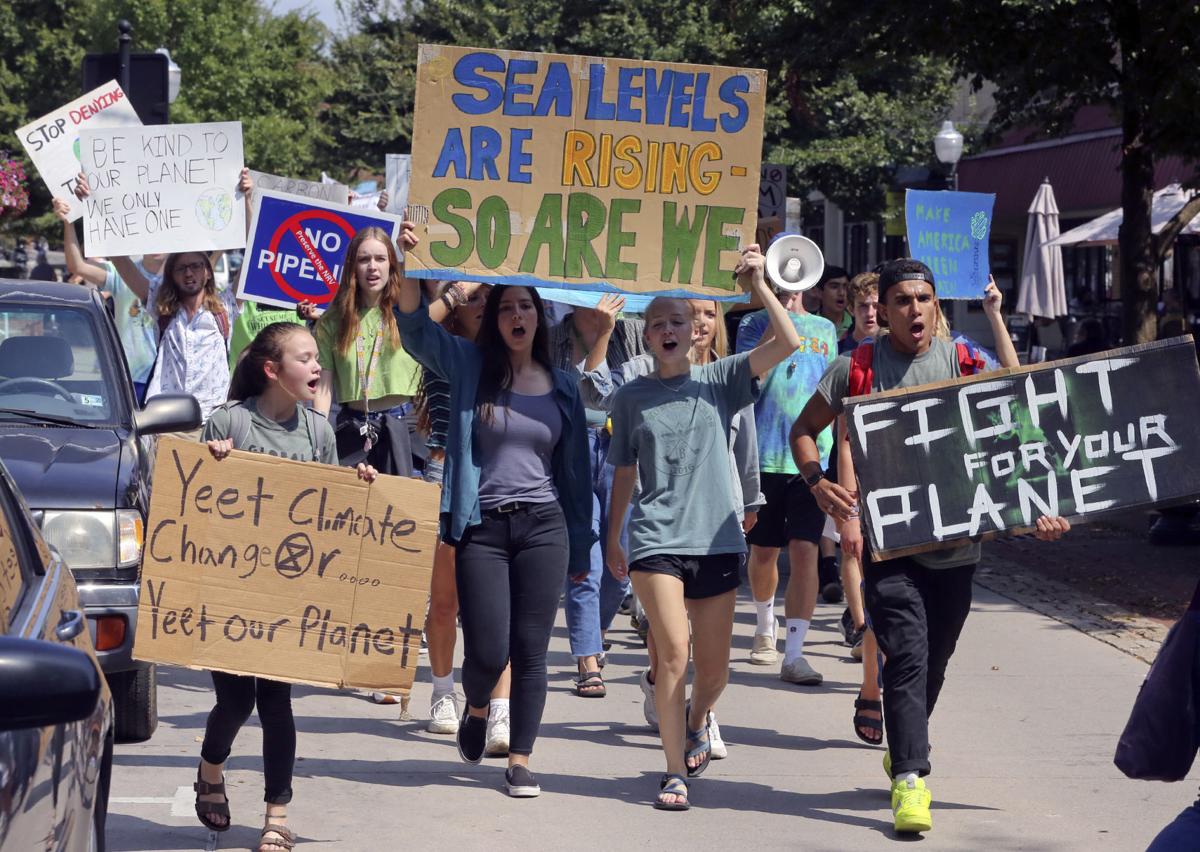 Climate Strike marchers chant “Hey-hey, ho-ho, fossil fuels have got to go,” while marching on College Avenue in Blacksburg on Friday. The hundreds of protesters at Virginia Tech were a contingent of millions of people rallying across the globe. 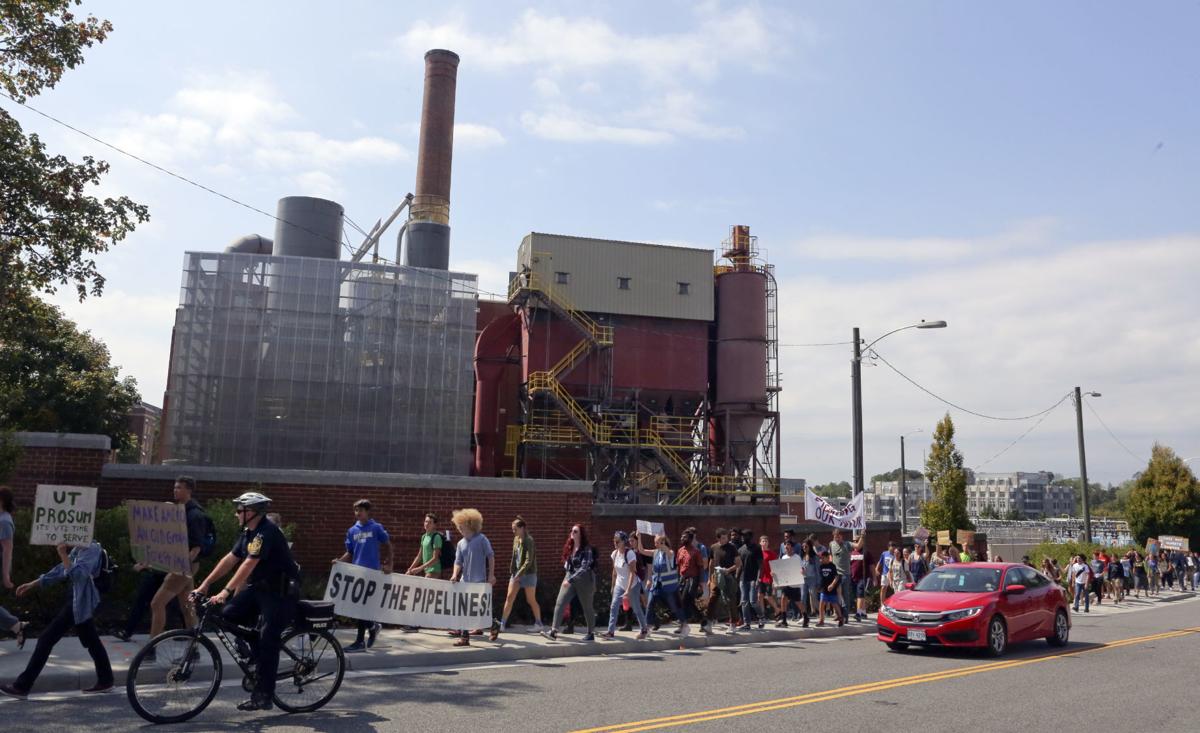 Marchers looped around the Virginia Tech power plant on Sept. 20 as part of a global climate strike. Many activists want to see the university shift to 100% renewable energy for electricity, heating and transportation by 2025.

Climate Strike marchers chant “Hey-hey, ho-ho, fossil fuels have got to go,” while marching on College Avenue in Blacksburg on Friday. The hundreds of protesters at Virginia Tech were a contingent of millions of people rallying across the globe.

Marchers looped around the Virginia Tech power plant on Sept. 20 as part of a global climate strike. Many activists want to see the university shift to 100% renewable energy for electricity, heating and transportation by 2025.

BLACKSBURG — As millions of people rallied across the globe to fight climate change, hundreds gathered at Virginia Tech on Friday to call for action from university, and national and world leaders.

They marched, they said, to call for policies that will combat climate change.

“We have a responsibility to take action for our planet,” Blacksburg High School student Rose Gruss told the more than 500 gathered. “It’s our one and only hope.”

The global strike, led by internationally-known Swedish teenage activist Greta Thunberg, called for world leaders to do something about climate change in the face of a warming planet.

Strikes took place on every continent, including Antarctica. And they took place at various places in the region as well.

Climate change is one of the biggest threats to humanity’s future, activists joined experts in saying. Rising sea levels, shifting extreme weather patterns and threatened food production will all challenge infrastructure and lives unless leaders take action, they said.

“We don’t have a choice,” Virginia Tech graduate student and climate strike leader Laura Lane said. “Our climate is changing and we can’t reverse it.”

In Blacksburg, speakers on the Drillfield, and later the steps of Burruss Hall, ranged from community activism mainstays such as Blacksburg Vice Mayor Susan Anderson to fresh faces such as 8th grade student Vishavjit Gill.

It was special to be part of a global movement, student leaders Heidi Hahn and Rachel Spector said.

Spector said she had “chills” when she saw images of strikes in other part of the world.

About 100 Blacksburg High School students marched along Prices Fork Road from their school to campus.

Student leader Christian Shushok said students who took part were not given an excused absence and those who participated wouldn’t be allowed to take part in school activities including some of the high school’s Homecoming events this weekend.

He said he was disappointed because school administrators were sending a message that “activism and school activities can’t go together.”

However, taking part was worth it, participants said.

“Every generation has a challenge that seems insurmountable,” Shushok said. “This is ours. We have to do something.”

On the opposite end of the spectrum, Tech instructor Marcia Davitt said she canceled her classes in data in social context Friday so her students could take part in the strike if they wanted. She said the issue is important and she knows that many young people care about it.

“It’s time to say no more business as usual,” she said.

Clarke told the strikers that Sands would meet with the students next week. It’s unclear what would occur at that meeting or if administrators were willing to meet student demands. However, Clarke said that he and Sands support the students and want to fight climate change.

Tech has made an effort to combat climate change since 2009 when it approved the Virginia Tech Climate Action Commitment. That plan includes goals like improving energy efficiency, having a minimum LEED rating of silver on all new construction (there are two higher ratings and one lower one), and reducing carbon dioxide emissions by 80 percent below 1990 levels by 2050.

The plan was a “statement ahead of its time,” according to Tech spokesman Mark Owczarski.

Since then, Tech has maintained an “unwavering commitment to reducing the carbon footprint of the university,” Owczarski wrote in an email.

He touted a number of green initiatives including an effort to make tailgating greener on football gamedays, sustainability education programs on campus and the lights out power down event, which encourages people on campus to reduce power usage.

Student leaders said they ultimately want to see more. Their demands include that Sands declare a state of emergency and denounce the construction of energy projects like the Mountain Valley Pipeline; that university-run Virginia Tech Electric use 100% renewable sources by 2030; and that the Virginia Tech Foundation divest from all publicly-traded companies that hold coal, oil, or gas reserves and intend to use or sell them for the purpose of combustion.

Although it’s unclear what students will ultimately see from the day, they were hopeful that some change could come from the event, said Owen Callahan, a student leader.

“I’m unbelievably proud of everyone who came out today,” Callahan said.

Days like this are good, and rallying together can create positive change, his fellow organizer Spector said. The key will be to maintain momentum in advocating for people to fight climate change by reducing carbon footprints.

“We just have to make sure it doesn’t fizzle out,” she said.

More than 500 people gathered on Virginia Tech's campus on Friday to call on action from the university, and national and world leaders to com…

The activists in Blacksburg put together a list of demands for Virginia Tech President Tim Sands and the university that was presented Friday.

Good for them. Of course the real elephant in the room is overpopulation. There are only so many people the Earth can support.

Mother Nature pays no attention to protesters ,,, or politicians looking for a vote.

When Mother Nature comes acalling , it is best you do what folks have been doing for thousands of years, cancel your protest and hunker down. Hallelujah, and period.