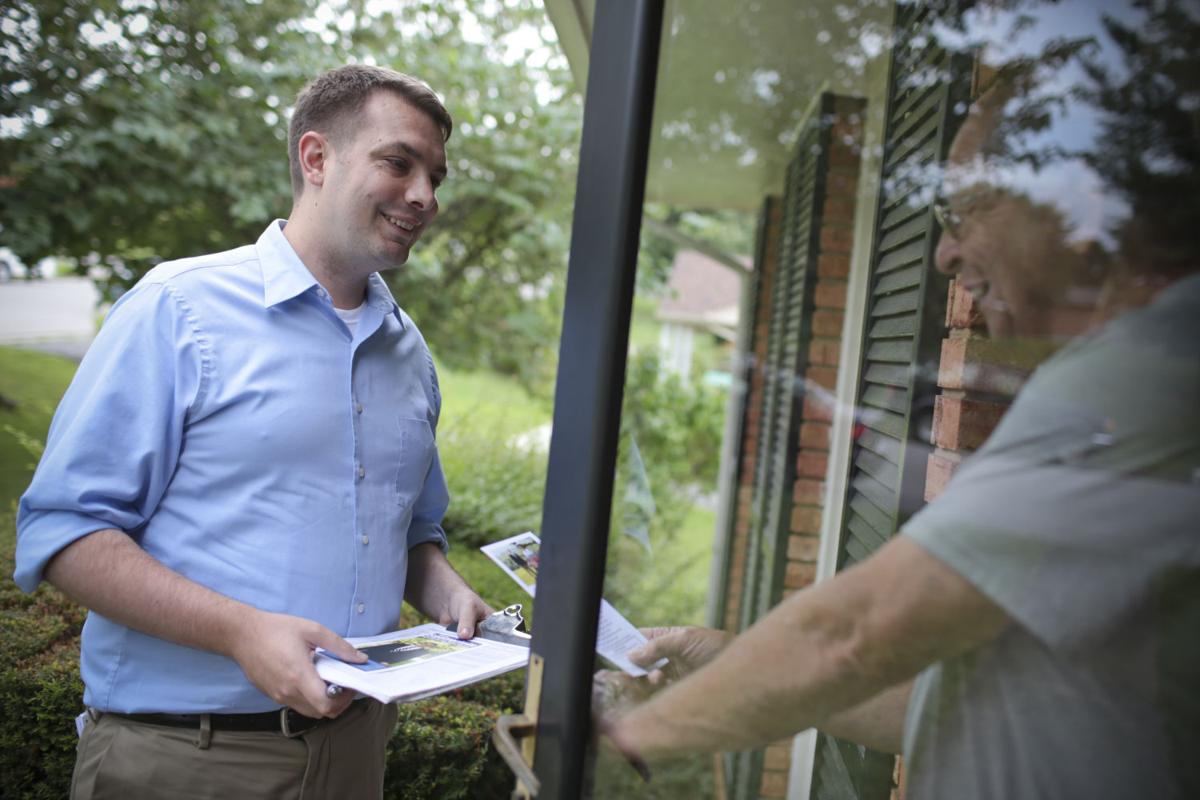 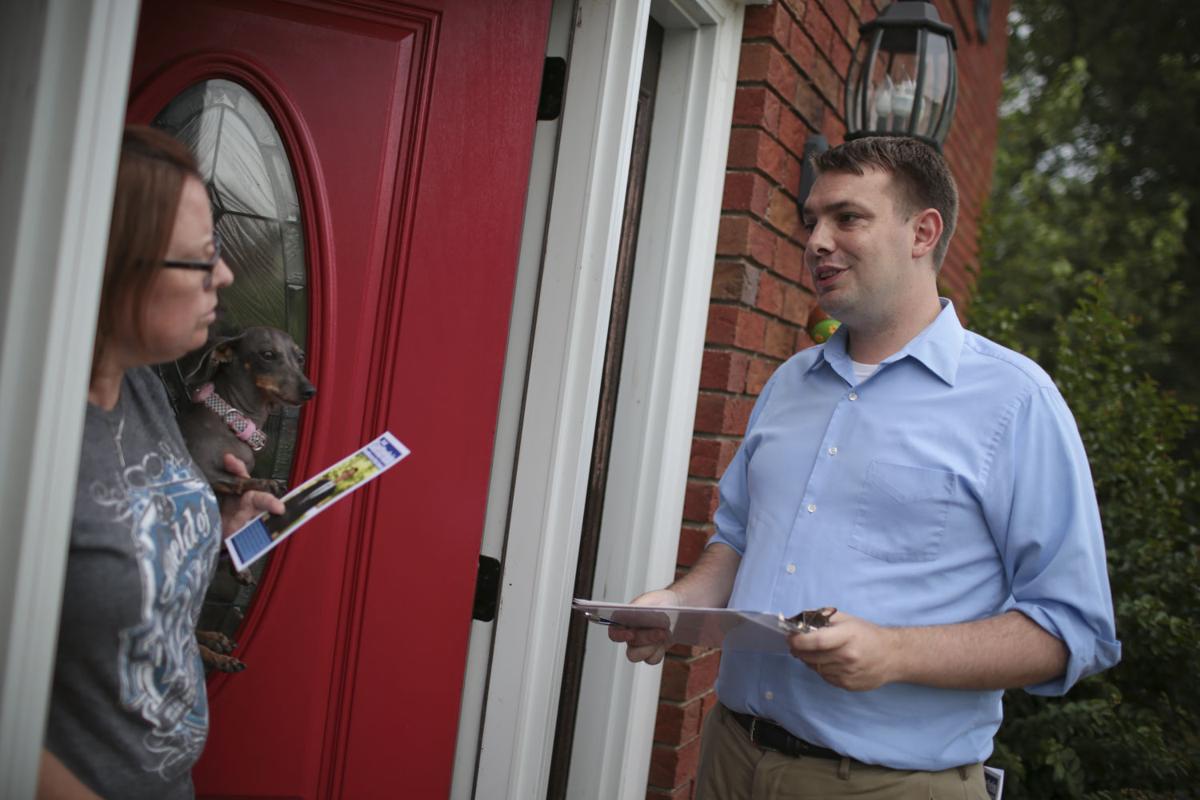 One of the first questions David Suetterlein gets knocking on doors in a residential corner of Salem isn’t about politics or policy.

It’s about biography: Where are you from?

For Suetterlein, a candidate for the 19th District Virginia Senate seat, the answer can’t be boiled down to one word.

He and his family — which includes his wife and two children, ages 4 and 1 — make their home in Cave Spring in Roanoke County.

But Suetterlein, who comes from an Air Force family, grew up on the move as his father, a lieutenant colonel, fielded new assignments.

Since settling here eight years ago, Suetterlein, 30, has been active in Republican politics, navigating the General Assembly as legislative director for Sen. Ralph Smith, R-Bedford County, and serving as chairman of the Roanoke County Republican Committee.

Outside political circles, he’s lesser known, sticking to a behind-the-scenes role working on legislation and campaigns.

His low profile fueled surprise in March when Smith unexpectedly announced he was retiring and endorsed Suetterlein to succeed him.

Suetterlein, who has two opponents for the seat, now faces the challenge of stepping out and sharing his own story and ideas with voters.

“I get to have a thousand job interviews,” he said while canvassing a Salem neighborhood. “But I like knocking on doors. It’s the best, most effective way of reaching people and hearing where they’re coming from.”

From an early age, Suetterlein gravitated to politics and government. By 14, when his family settled in Fairfax, he was volunteering for campaigns. At 17, he was made a precinct captain.

In 2002, he joined the underdog primary campaign of a state Senate candidate destined for defeat by all accounts. Even Suetterlein’s parents planned to vote for the other guy.

“My dad joked I was just rebelling, in a very unconventional way,” he said.

The candidate, Ken Cuccinelli, went on to win the primary and general elections, a feat Suetterlein said was driven by hard work and thousands of direct conversations with voters on the issues.

By primary day, even his parents changed their minds and backed Cuccinelli.

“We worked really hard and so did a lot of other people,” Suetterlein said. “That’s how he won.”

Suetterlein worked on Cuccinelli’s staff in Richmond, finding he liked the complex work of dissecting legislation on education, property rights and the myriad other issues that spring up during the annual General Assembly session.

But he and his now-wife, who lived in Bristol at the time, hoped to settle farther southwest, perhaps in the Roanoke Valley.

When Smith, a conservative and former Roanoke mayor, joined the Senate in 2008, he picked Suetterlein to run his office. The two have worked together since and closely align on the issues: Pro-fiscal restraint. Anti-abortion. Anti-Medicaid expansion.

On education, one of the top three issues he hears about from voters, Suetterlein said Virginia needs to shift away from standardized testing and toward localized, skills-based evaluations.

While accountability is crucial, he said, localities need a greater voice in shaping the assessments used.

Schools need freedom to innovate rather than teaching to a standardized test, he said, noting his mother and sister are both public schoolteachers — one in Fairfax and the other in Washington County in western Virginia.

“Those are two very interesting perspectives and very different school divisions,” he said. “If we had more localized assessments — as opposed to all these standardized tests being given in a small window of time — that would be a good thing and would encourage more of a skills-based approach.”

Salem, he added, has been a leader on this front. The city high school just received a $50,000 state grant to lay groundwork for a personalized student learning initiative.

The state also needs to recognize when students make progress in their scores, even if they still fall short of testing benchmarks, he said, and likewise when a student technically passes but shows a marked decline in performance.

Suetterlein supports a proposal to amend the state constitution and make it easier to open charter schools in Virginia. His own children will attend Roanoke County Public Schools.

Like Smith, Suetterlein considers himself a strong conservative. When a voter asked about guns in June, Suetterlein answered, “I strongly support the Second Amendment and the individual right of firearm owners.”

When another voter asked Suetterlein about the debate over the Confederate flag appearing on state license plates, he said he didn’t think the emblem belonged there.

“Well, then you don’t get my vote,” the Salem man said.

Suetterlein nodded quietly. He said he tries not to make promises he can’t deliver to voters.

Stopping the Mountain Valley Pipeline? That decision is up to federal regulators, not the General Assembly, he said.

But he said he’d support opening such projects to greater scrutiny under the Freedom of Information Act. He’d also consider repealing a controversial surveying law, though he’d want to ensure it wouldn’t ultimately set back property rights as some suggested when the idea was broached in the 2015 session.

The General Assembly in 2004 passed a law allowing natural gas companies to access private property, without the owner’s permission, to examine and survey land for a possible interstate pipeline route.

If elected, Suetterlein would be a freshman, one of 40 votes in a closely divided Senate. But he notes he’s the only candidate with legislative experience, having worked with lawmakers for nine years, with his party in the minority most of that time.

“That meant every bill we got passed was inherently bipartisan, because it wouldn’t have passed without at least some Democratic votes,” he said. “So I’ve gotten to work with a lot of folks with very different perspectives.”

This month, speaking after a forum held at a volunteer firehouse in the shadow of the mountains, Suetterlein said he’s running because he loves the region.

“This is home,” he said. “I didn’t have the good fortune to be born here, but I had the good sense to stay here.”

“Both my kids were born here, and I want them to be able to stay here. That will mean making sure there are opportunities for them. And that means working for economic development and strong schools.”

Read about the other candidates for the seat: