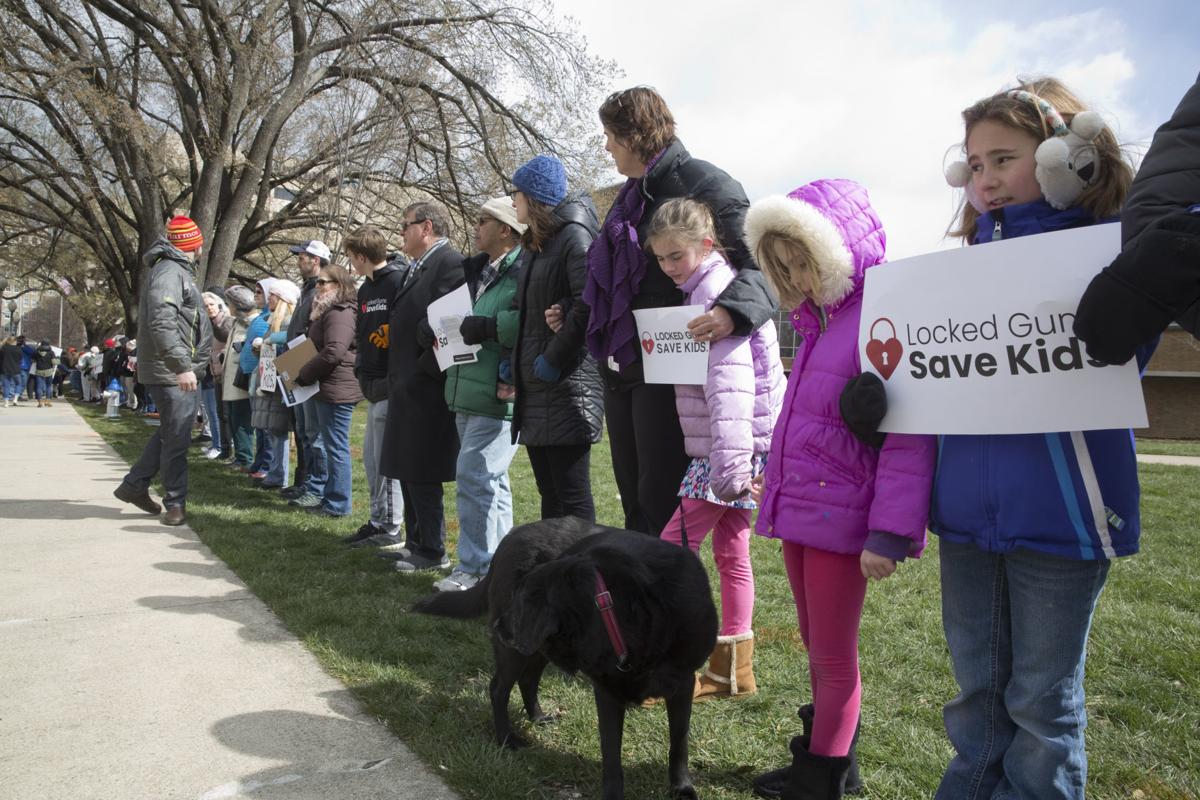 Ryan Hubbard, 9, Quinn Hubbard, 6, with their dog, Sammy, and Niav Murphy, 10, stand in line with their mothers and others, arms locked at Wednesday’s One Day One Voice solidarity gathering along Jefferson Street in front of Roanoke’s Main Library. 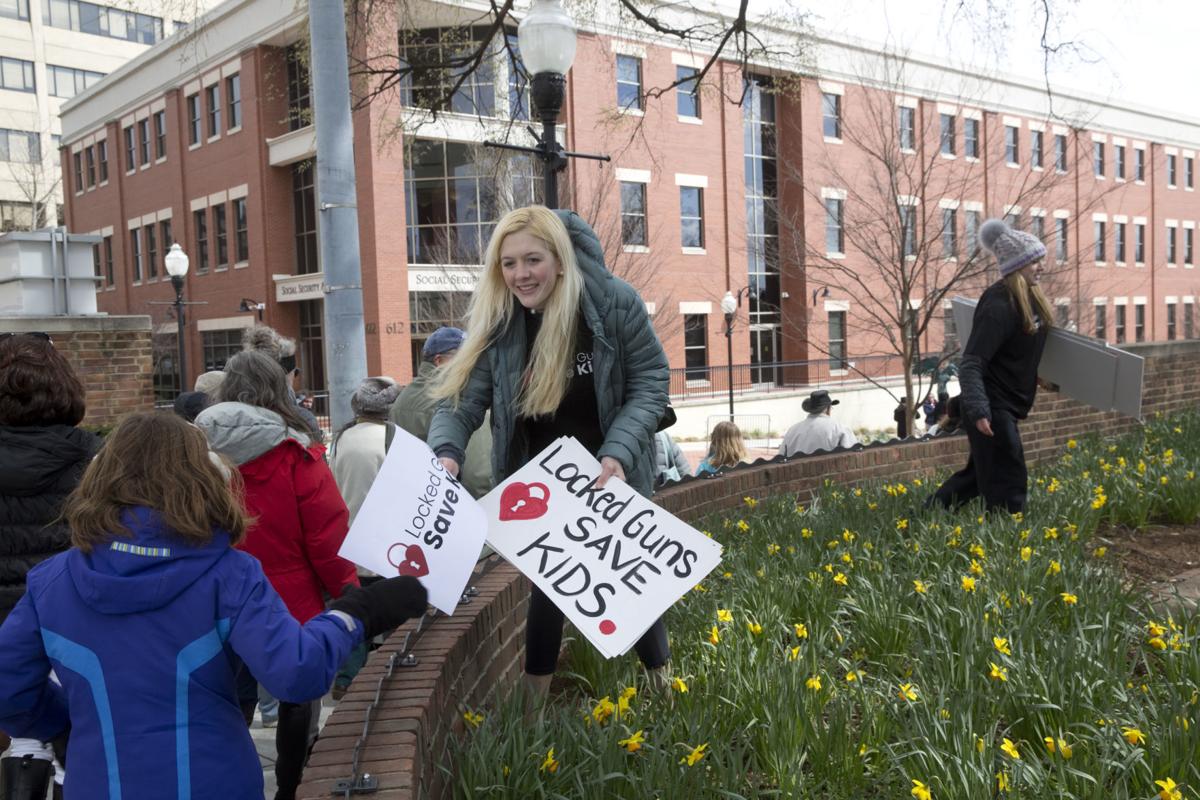 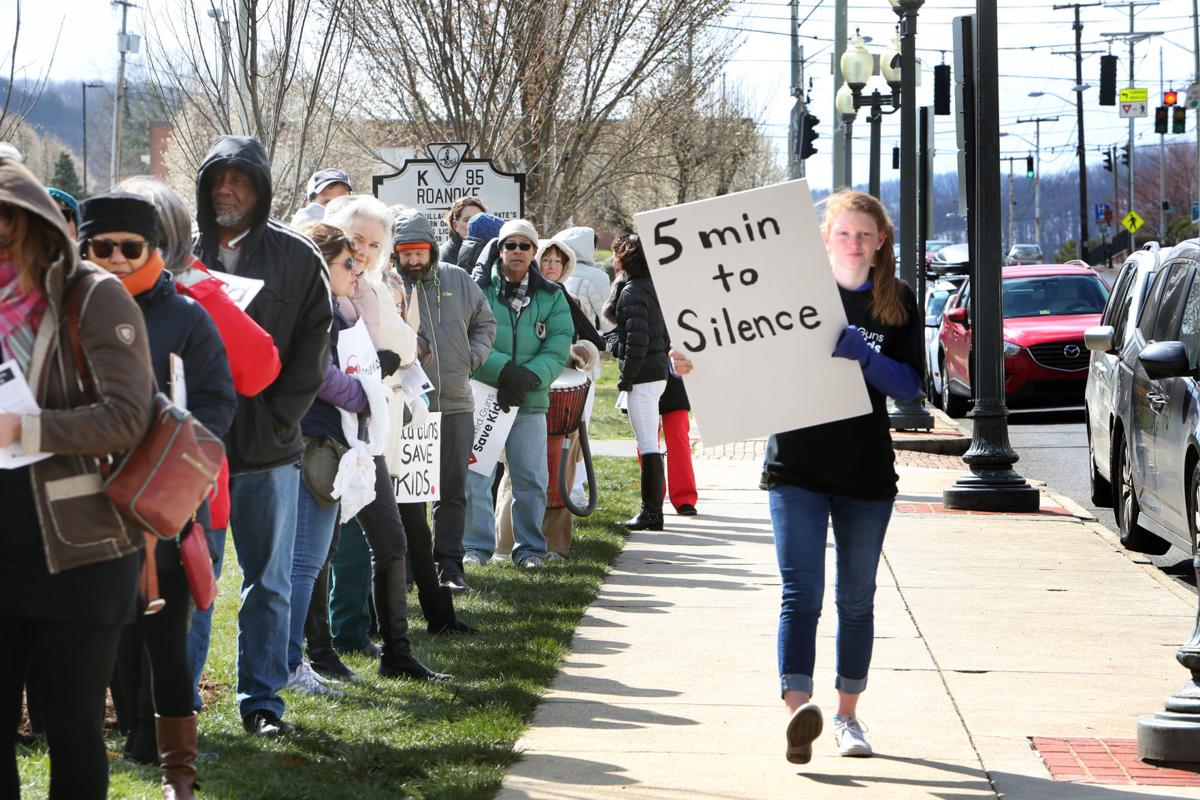 Grace Whitehead, 15, a sophomore at Patrick Henry High School, volunteered along with other classmates at the One Day One Voice event on Wednesday along Jefferson Street.

Ryan Hubbard, 9, Quinn Hubbard, 6, with their dog, Sammy, and Niav Murphy, 10, stand in line with their mothers and others, arms locked at Wednesday’s One Day One Voice solidarity gathering along Jefferson Street in front of Roanoke’s Main Library.

Grace Whitehead, 15, a sophomore at Patrick Henry High School, volunteered along with other classmates at the One Day One Voice event on Wednesday along Jefferson Street.

Pleading for safety in their classrooms and warning politicians that if they don’t do something they’ll vote them out in a few years, students in the Roanoke Valley joined tens of thousands of other young people across the country in walking out of school Wednesday morning to send a message that they want action on gun violence.

“I think that myself and all students deserve to be safe, and education is a right in this country, and we deserve to be safe in that space,” said Irene Marcellino, 18, a senior at Hidden Valley High School. “It’s something everyone should have, and I don’t feel that we are getting that right now.”

Marcellino participated in a walkout at her Roanoke County school before joining people at Elmwood Park in Roanoke for another rally with adults protesting gun violence. The walkouts marked one month since a gunman killed 17 people at a high school in Parkland, Florida, an event that has spurred public pressure for gun control.

“Groups like the NRA have been given more power than they deserve,” said Kate Berding, a grandmother to two children. “We need to combat this problem by making our voices heard.”

Across the country, students were urged to leave class at 10 a.m. for 17 minutes — one minute for each person who died in Florida. Salem High School held an assembly outdoors. Roanoke and Roanoke County’s school divisions barred the news media from the high school campuses to cover the events.

At Roanoke’s William Fleming High School, about 150 students streamed out of the doors and gathered in front of the school. Standing in the freezing air before a bitter wind, many held signs aloft reading “Never Forget,” “Guns Kill! Simple As That!” and “We Stand With Stoneman Douglas.” At exactly 10:17 a.m., the crowd quickly and quietly dispersed.

A group of about 25 students gathered in front of the nearby Roanoke Valley Governor’s School. They stood outside in the biting cold, several without coats and one even in a T-shirt and shorts for 17 minutes.

At the adjacent Patrick Henry High School, about 400 students formed a circle on a patio and sang songs. Sophomore Case Eshelman, 16, said his teacher encouraged the students to attend the walkout, and he heard from friends that most teachers were also supportive.

“With all the shootings and violence in the schools, it’s just gone too far,” Eshelman said.

The walkouts were organized by Empower, the youth wing of the Women’s March, which coordinated protests across the country last year. Roanoke Valley students said they have been inspired by the students from Parkland who have become gun-control advocates and are lobbying legislators and doing media interviews.

“It starts with the students,” said Ella Higgins, 15, a sophomore at Patrick Henry who continued the walkout from her school by attending the Elmwood Park event. “In Florida, they’ve already changed gun laws because of all the student movements that have happened.”

Congress has shown little willingness to tighten gun laws in light of the recent mass shootings. President Donald Trump has retreated from his initial support for raising the minimum age for buying an assault rifle to 21.

The Virginia General Assembly closed its session last week with the death of a host of gun control bills, including one that would have required a minor to get parental permission before keeping guns in the home as well as another that would have prohibited bump stocks, the devices that last year’s Las Vegas shooter used to make his weapons fire like fully automatic weapons.

Students said they’re looking forward to when they can vote in upcoming elections. They warned lawmakers opposed to what the students consider to be sensible gun legislation that they will ensure they are not re-elected.

“They better prepare for us,” said Emery Perry, 15, a sophomore at Patrick Henry.

The group that organized the event was called One Day One Voice. The group is pushing for responsible gun ownership, particularly with gun locks to prevent people from accessing firearms and intentionally or accidentally harming themselves or others.

The group said it’s changing its name to “Locked Guns Save Kids,” to continue its mission beyond Wednesday’s event. They’re hoping to get schools to tuck into take-home materials at the beginning of the school year a “Family Safety Pledge” that encourages parents to lock up firearms.

For 17 minutes, everyone stood along Jefferson Street with their arms linked. They held signs saying “Locked guns save kids.” A few passing cars honked their horns in support.

“I just want to go to school and not have to fear someone will do something like that,” said Maya Andrade, 11, a student who stayed home from James Madison Middle School in Roanoke on Wednesday.

Kate Cumins, 11, Claire Thielecke, 12, and Cora Dalton, 12, all walked out of James Madison and then joined at Elmwood Park.

“We don’t think it’s safe sometimes at school, and we get nervous hearing about the Parkland shooting,” Thielecke said.

“No one should ever feel unsafe at school,” Cumins said.

'One Day, One Voice' event draws more than 100 to protest gun violence