Members of the William Byrd Middle School beekeeping club present proposed policy revisions on Sept. 17 to Vinton Town Council. The group had discovered that the town’s ordinances were out of date. 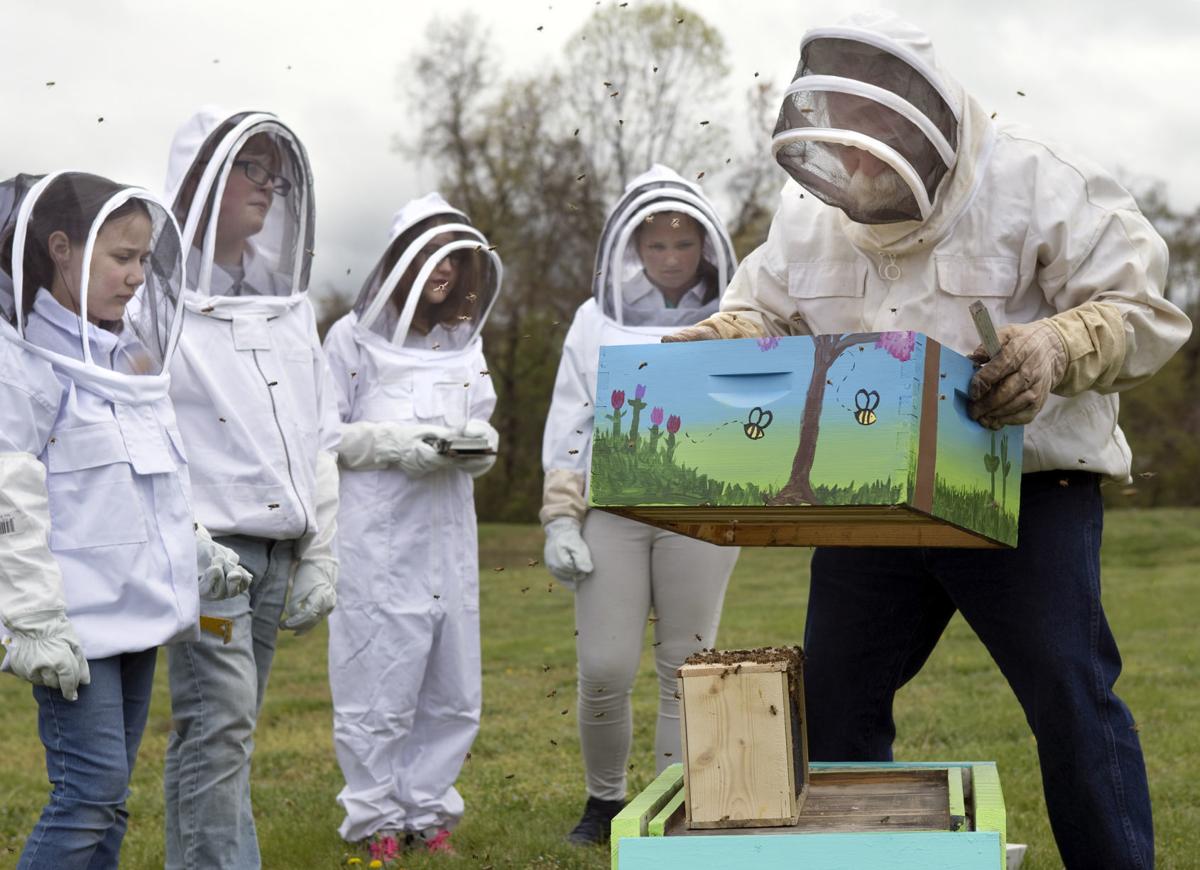 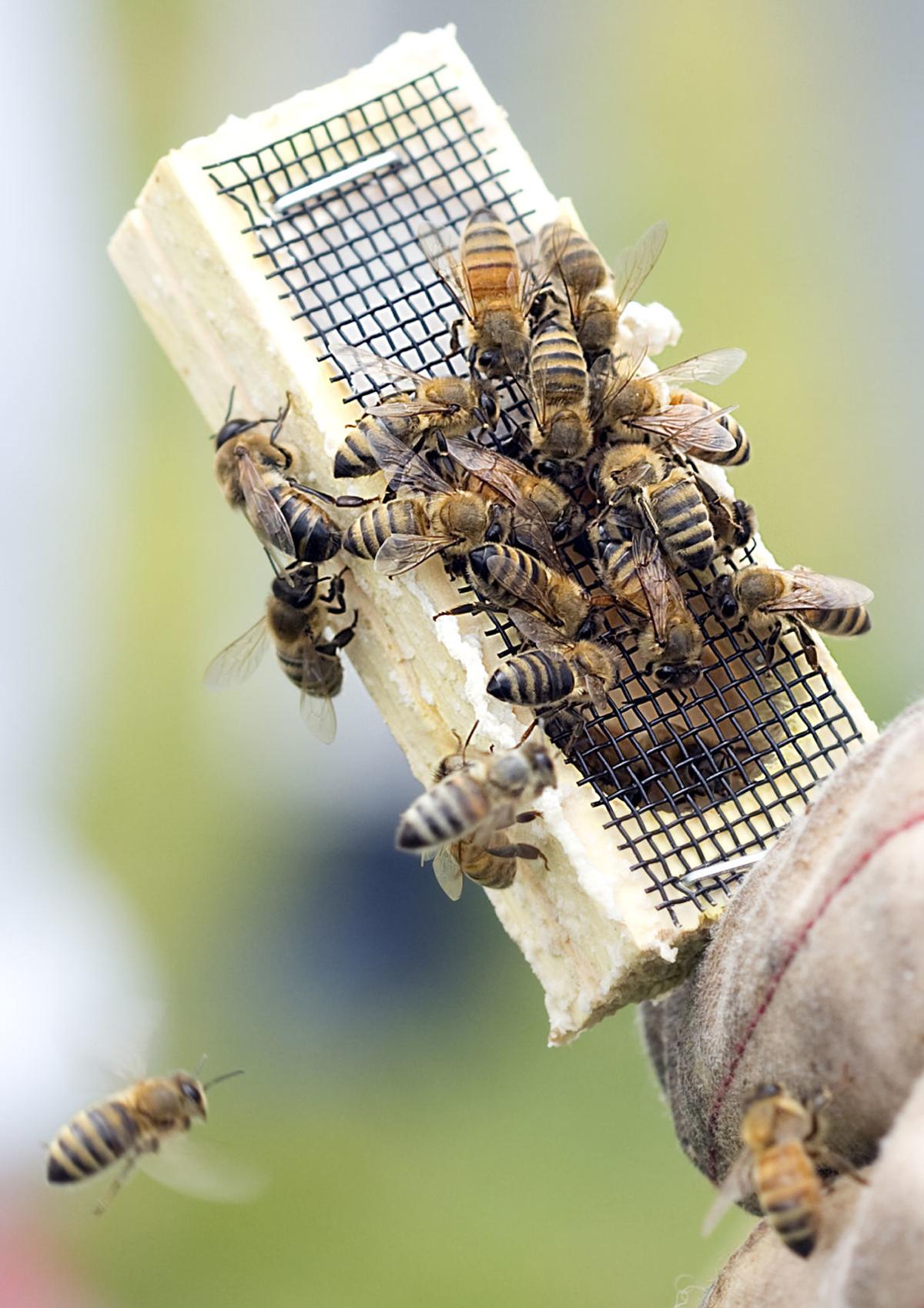 The queen bee is introduced to the hive built by William Byrd Middle students.

Members of the William Byrd Middle School beekeeping club present proposed policy revisions on Sept. 17 to Vinton Town Council. The group had discovered that the town’s ordinances were out of date.

The queen bee is introduced to the hive built by William Byrd Middle students.

The halls of government are abuzz in Vinton.

The town is being lobbied by a group of young advocates who hope to make the community a more bee-benevolent place.

The members of William Byrd Middle School’s own beekeeping club researched and wrote a set of proposals to update the town’s apiary ordinances.

“We decided we should approach the town council,” she said.

The William Byrd beekeepers, now in their third year as a club, have been hard at work tending to a set of hives kept on campus.

Their colony is thriving, officials said, and the club just marked its first honey harvest. Members now range from sixth-graders to ninth-graders.

The club’s new civic outreach project first began taking shape when members who live in Vinton discovered old regulations on the books that are no longer current with best practices.

The town code, for example, directs hobby beekeepers to avoid handling their charges in the daytime. Actually, the students said, it’s safer and less disruptive for the bees if you check on your hives during the day.

The students broached the issue in the club, said adviser Heather Balsley, and were encouraged to develop ideas to modernize the statute.

Together, they tackled the tasks of researching other local ordinances across the region, consulting with mentors in the Blue Ridge Beekeepers Association and crafting a final presentation to take to the Vinton Town Council.

“It’s been a fantastic experience for them,” said Balsley, adding town officials were supportive and welcomed the club’s ideas.

The process has given the group a firsthand look not only at how government works but at how they can play a part in it to make a difference, Balsley said.

“It was just awesome to see them so excited about it,” she said. “They had to work together to write their presentation, and they took it really seriously. They wanted it to be professional and to make sure they had all their facts straight.”

Their pitch, delivered during a town council meeting last week, was deemed both impressive and endearing by the powers-that-be.

“That was very detailed and educational,” said Vice Mayor Keith Liles, adding the students had done work well beyond their years.

“You all actually rewrote an ordinance.”

Councilwoman Janet Scheid said she was happy to see a new generation developing a passion for ecology.

The club, in addition to studying how to sustain hives, learns about the vital role that bees play in the environment and the threat created by mysterious disorders such as colony collapse.

Pollinators play a part in the production of one-third of our foods, reported the young beekeepers, and everyone can help sustain their numbers by planting gardens with a mix of bee-friendly flowers and plants.

“It warms my heart to see so many little environmentalists out here worried about the bees and our ecosystem,” Scheid said.

The club’s suggested amendments are expected to come back next month for a vote. The town council hinted it was inclined to look upon the proposals favorably.

McKenna Paradis, a founding member of the club who’s now in ninth grade, said it had been fun to share everything she’s learned about bees and their outsized benefit to the world around them.

“I’m nervous but hopeful that our ordinances will be approved,” she said. “It’s definitely exciting.”

William Byrd students learn to be 'keepers of bees'

William Byrd students learn to be 'keepers of bees'

Way to step up young people! Good on you!!