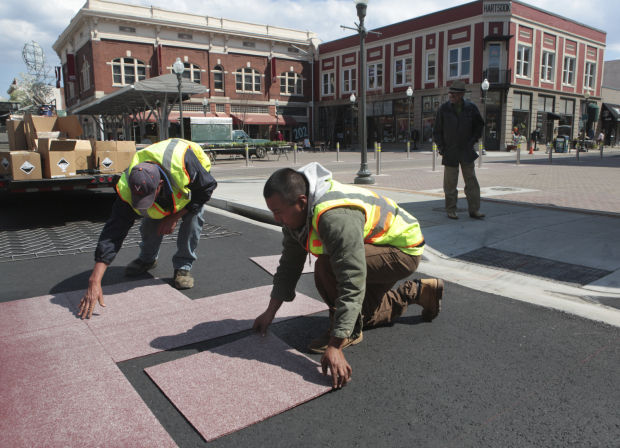 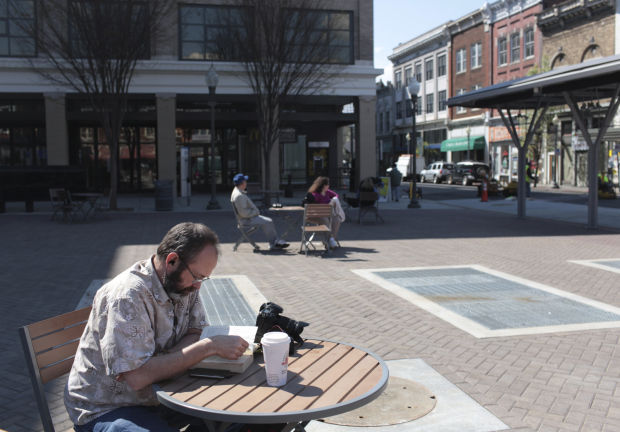 Ron Bailey of Roanoke reads in Market Square on Wednesday. “I like the fact that there are tables, and it encourages you to interact with each other,” Bailey said.

Downtown Roanoke Inc., which manages the city market, has placed bistro tables in the square for diners and loungers.

ERICA YOON | The Roanoke Times
1 of 2

Ron Bailey of Roanoke reads in Market Square on Wednesday. “I like the fact that there are tables, and it encourages you to interact with each other,” Bailey said.

City workers were putting the finishing touches on the $1.1 million Market Square renovation Wednesday, in anticipation of a grand re-opening ceremony later this month that will include filming for a gardening show on public television.

The project, which involved underground utility work in addition to cosmetic changes like brick pavers and a relocation of the market vendor stalls, kept the square closed off for just more than three months until last week. It came in on time and on budget, Assistant City Manager Sherman Stovall said.

Wednesday, workers were replacing crosswalks on Campbell Avenue. Downtown Roanoke Inc., which manages the city market, has placed bistro tables in the square for diners and loungers. Umbrellas to “give some pops of color” are on the way, along with planters, said Tracie Hughes, DRI’s market manager.

Next week, custom aluminum tables will arrive to go under the vendor stall awnings, Hughes said. Unlike the old concrete tables, which were mounted on the awning structure, the new tables can easily be removed to open up the square for special events.

And some events are already on the calendar. City officials will participate in a ribbon cutting on April 24, and the grand re-opening ceremony will be on April 26.

The event will involve live music, children’s activities, and a visit by Joe Lamp’l, host and creator of “Growing a Greener World” on PBS. Lamp’l will film part of his show in the square, Hughes said.

The completion of the work on the square, which eliminated about two dozen parking places and turned the area into mainly a pedestrian plaza, brings to a close a couple of years of disruption and dust in market area. The renovations of the City Market Building and Center In The Square made construction crews and fences fixtures of the area, and those projects seemed hardly finished when the work in the square began in early January.

But it’s not all over yet. Soon work should begin on the construction of a 127-room Hampton Inn atop the Market Garage at the south end of Market Street.

Over the years, Downtown Roanoke Inc.'s free outdoor movie screenings have moved from Elmwood Park to Wells Fargo Plaza and now to the renovat…