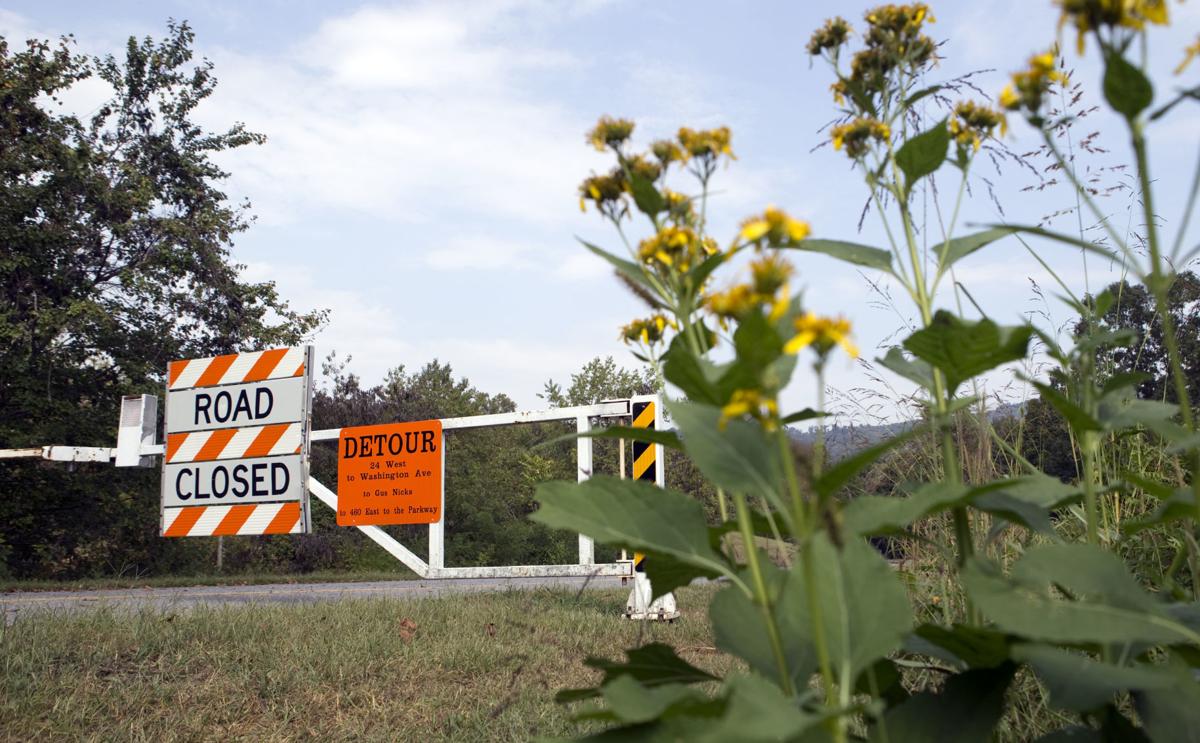 Travelers heading north on the parkway must exit at Virginia 24, then travel west toward Vinton. 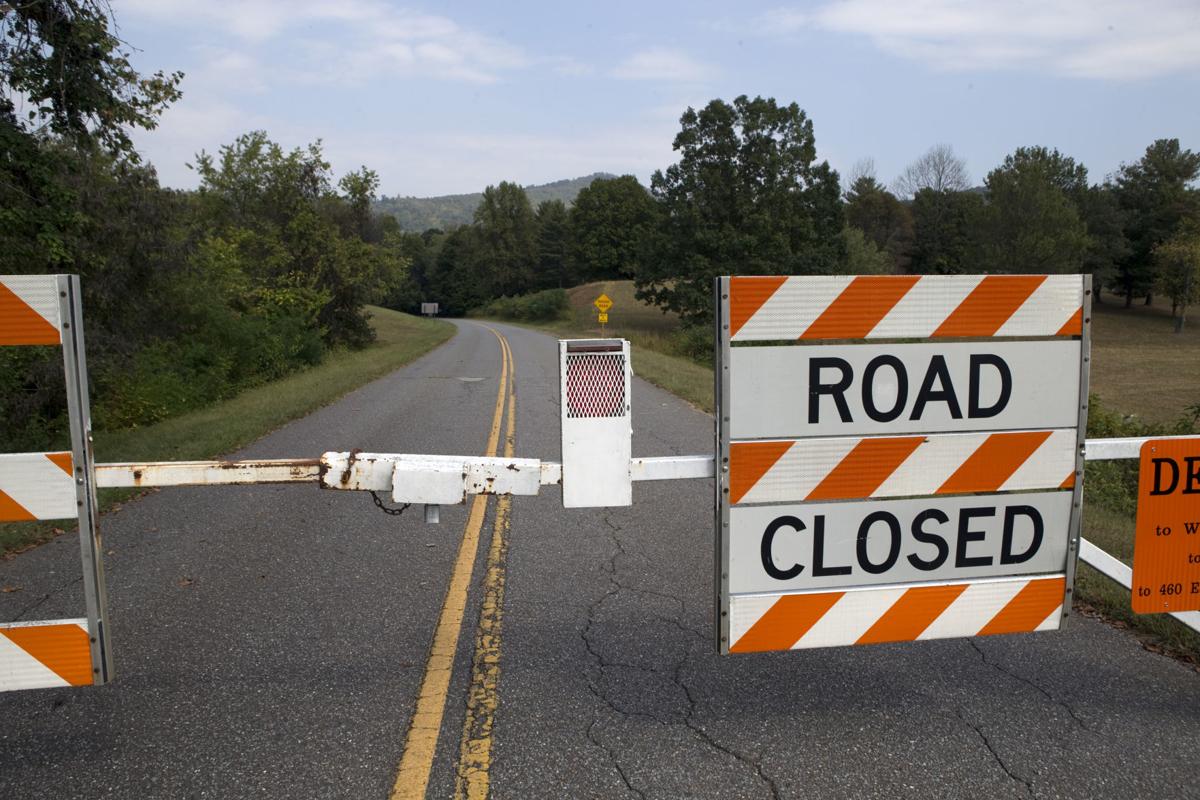 A barricade on the Blue Ridge Parkway headed north suggests a detour route at Virginia 24 near Vinton on Tuesday. 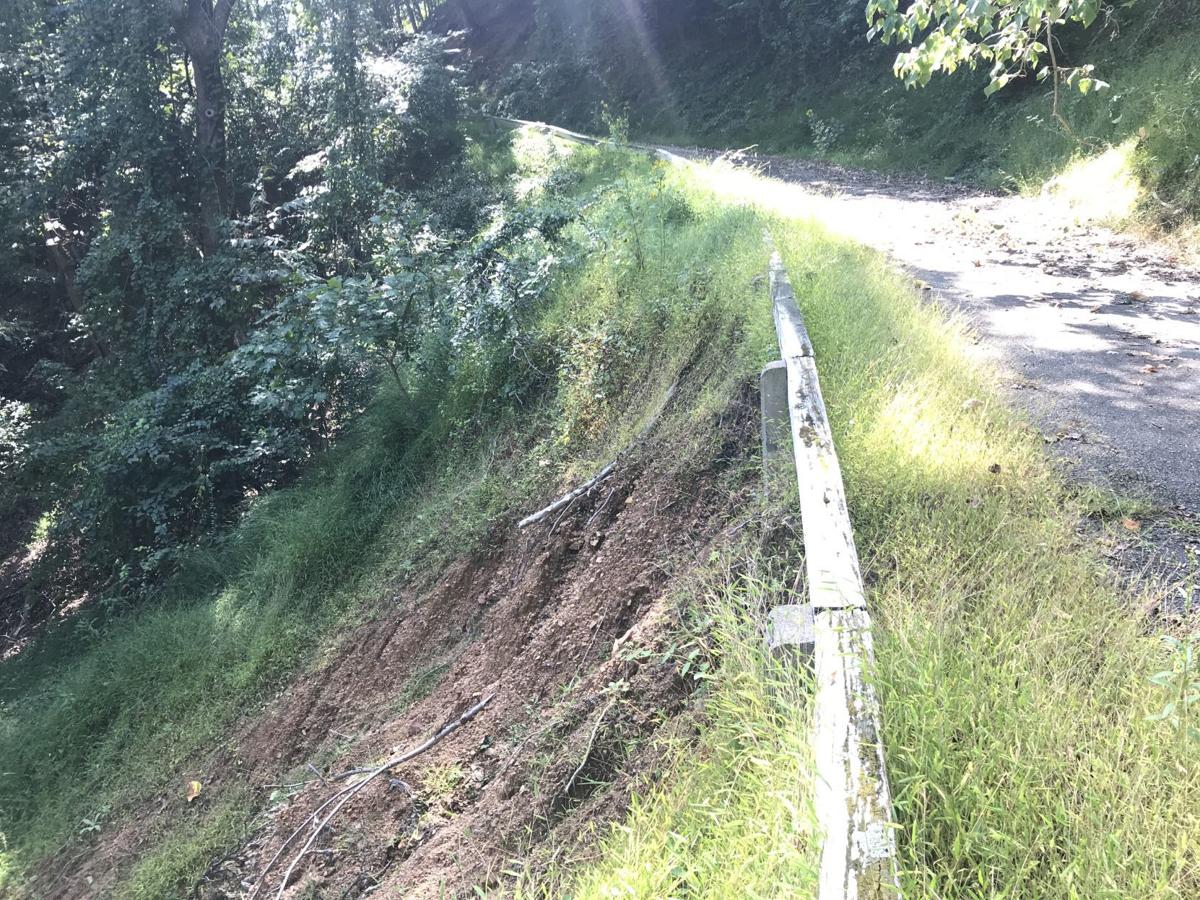 The embankment below a portion of the eastern side of the Roanoke Mountain Overlook Loop Road washed out during heavy rains in fall 2018. The road has been closed since then.

Travelers heading north on the parkway must exit at Virginia 24, then travel west toward Vinton.

A barricade on the Blue Ridge Parkway headed north suggests a detour route at Virginia 24 near Vinton on Tuesday.

The embankment below a portion of the eastern side of the Roanoke Mountain Overlook Loop Road washed out during heavy rains in fall 2018. The road has been closed since then.

Travelers along the Blue Ridge Parkway are taking detours around an unsafe stretch of road in Roanoke and Botetourt counties, but parkway officials believe repair work will begin soon now that the federal government’s new budget year has begun.

A 6-mile stretch of the parkway between mileposts 106 and 112, which is the segment of road between U.S. 460 in Botetourt County and Virginia 24 near Vinton, has been closed for nearly a month after federal officials deemed that part of the scenic road was unsafe. Pavement had settled in at least five spots, which made the road dangerous for certain types of vehicles, especially motorcycles and automobiles with low road clearance.

The closure happened at a bad time for the National Park Service for a couple of reasons. It happened just when visitation increases during the fall and it came at the end of the federal government’s fiscal year, which meant there was no money remaining in the park service budget to fix the road quickly.

The new fiscal year began on Tuesday, so parkway officials are hopeful that they can scrape up money to fix the road soon.

“We’re working to get it fixed as fast as we possibly can to make it safe again for parkway visitors,” said Leesa Brandon, a parkway spokeswoman who is based in Asheville, North Carolina.

Even with the possibility of funding coming in a new fiscal year, the timing of the repairs still is not known, Brandon said.

The parkway is part of the Federal Highway Administration’s five-year Strategic Plan, which could help the park service get money for repairs and help line up a contractor to do the work soon. How is not clear.

October is traditionally one of the busiest months on the parkway, with travelers hitting the scenic road to look at fall colors, take hikes, picnic and visit restaurants and historic sites along its 469-mile length through Virginia and North Carolina. The Virginia stretch of the parkway has averaged nearly 600,000 recreational visits in October over the past five years, according to National Park Service statistics. The closed stretch between mileposts 106 and 112 has averaged nearly 64,000 visits over the past five Octobers.

Tourism officials want to make sure those travelers keep coming to the region even if they must take a detour off the Blue Ridge Parkway. Visit Virginia’s Blue Ridge, the Roanoke-based regional tourism bureau, has added a website link with facts, a map and business listings for travelers who must detour off the parkway during the closure. The site is online at https://bit.ly/2odafqy.

“October is such a big month for Virginia’s Blue Ridge and the parkway is a huge reason for that,” said Catherine Fox, Visit Virginia’s Blue Ridge vice president. “It’s why we chose Blue Ridge for our name. It’s a brand that’s recognized nationally and internationally. We know people will be inconvenienced because of this closure, so we need to help them.”

Overnight stays at the Peaks of Otter Lodge have been down recently, although general manager Andrew Mather wasn’t sure if that was due to the parkway closure or other factors.

“October is not looking good at all for reservations,” he said. Mather said that visits to the lodge and restaurant were down this summer compared to last year, although early September had shown a rebound.

Mather said that many Peaks of Otter regulars know the alternate routes to the lodge from Bedford and Buchanan, but the closed segment between the Peaks and Roanoke could still hurt visitation.

“I imagine it’s impacting us some,” he said of the closure.

The simplest detour is about 10 miles long and requires only one turn at one major intersection. Travelers heading north on the parkway must exit at Virginia 24, then travel west toward Vinton, where the road eventually becomes Washington Avenue and then Gus W. Nicks Boulevard when it reaches Roanoke. Travelers then turn right at the intersection with Orange Avenue, which is also U.S. 460, then drive 6.1 miles to the parkway entrance in Botetourt County.

The 6-mile stretch was closed Sept. 6 by federal highway officials, who determined that settling beneath the pavement had caused unsafe driving conditions, especially for motorcyclists and low-clearance vehicles.

The pavement had sunk in at least five separate places, Fox said, where a driver “could bottom out in a car.”

Fox has even helped draft a resolution for 11 localities along the parkway that points out the lack of funding for immediate repairs to the parkway, as well as noting the more than $500 million shortfall in deferred maintenance along the road. The resolution, which was expected to be taken up by Vinton Town Council on Tuesday, also would urge Congress to pass the Restore Our Parks Act, a bill introduced in the House of Representatives and U.S. Senate by sponsors from both the Republican and Democratic parties.

In addition to the closed 6-mile stretch in Roanoke and Botetourt counties, the 4-mile Roanoke Mountain loop road has been closed for nearly a year. That spur, which leaves the Blue Ridge Parkway near milepost 120 and climbs Roanoke Mountain before descending back to the parkway, was shut down to vehicles after the remnants of a tropical storm caused mudslides and damaged the road.

During a Sept. 22 visit by foot, the eastern road to the overlook was clear of obstructions. The Roanoke Mountain Overlook itself was overgrown with high grass and weeds, and part of a short loop trail at the summit was blocked by a large fallen tree.

The eastern portion of the loop road was barricaded near the summit, and several trees and a large boulder were down on the road. In one stretch of the eastern loop road a downhill portion of the roadside had given way, leaving a scar of dirt and rocks far downhill into the trees. The road surface remained intact.

“There’s going to be an assessment done to find a longer term solution to preventing slides,” Brandon said. Last fall, the Roanoke Mountain road “got to a critical point, where the road was undermined and washed away on the edges, where potentially more could wash out without much prompting. These mountains are always shifting, always moving, so the cumulative impacts and the wear and tear on the road can be significant.”

Brian Kelley contributed to this report.

The Blue Ridge Parkway has a long backlog of maintenance and repairs and a shortage of funding to pay for them. Most recently, a 6-mile stretc…

Visitors to the Blue Ridge Parkway left a trail of cash in their wake, according to the Nati…

A damaged section of the Blue Ridge Parkway crossing through Roanoke County could reopen within the next two weeks, local officials said Tuesday.

The Blue Ridge Parkway reopened a 6-mile stretch of the scenic road in the Roanoke area that has been closed for just over a month.