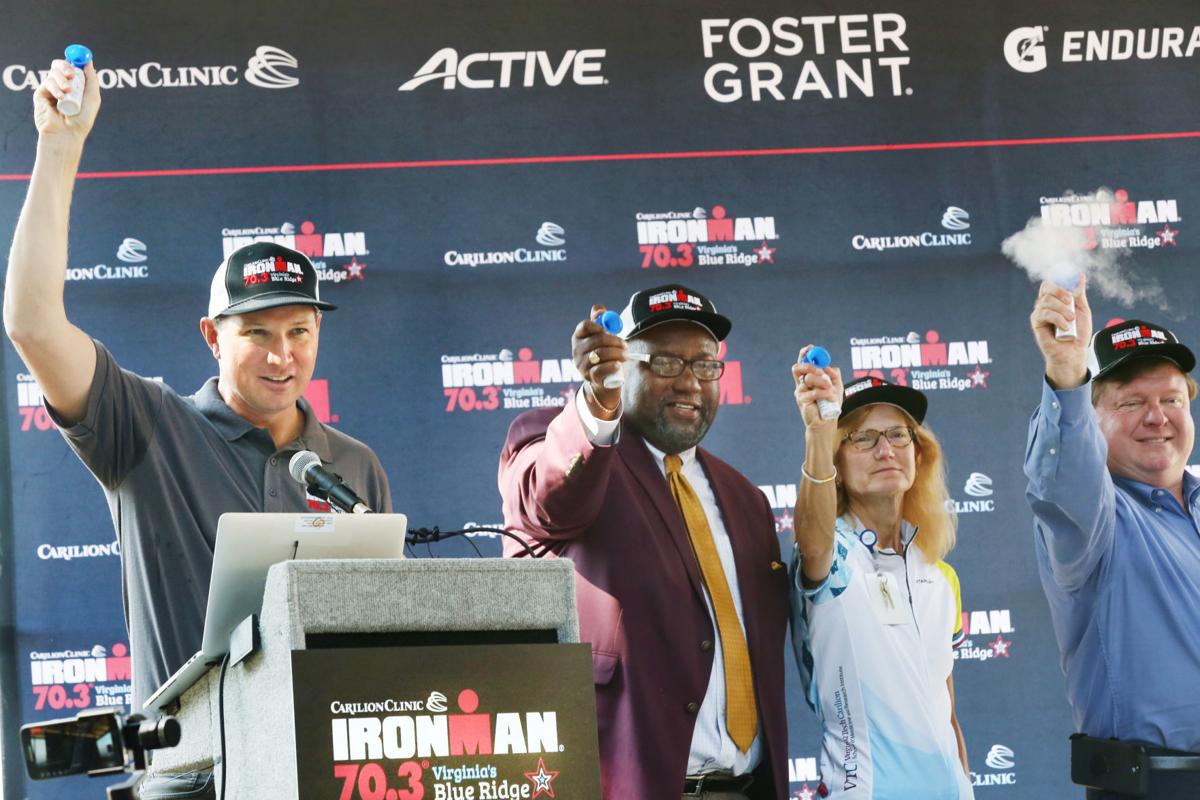 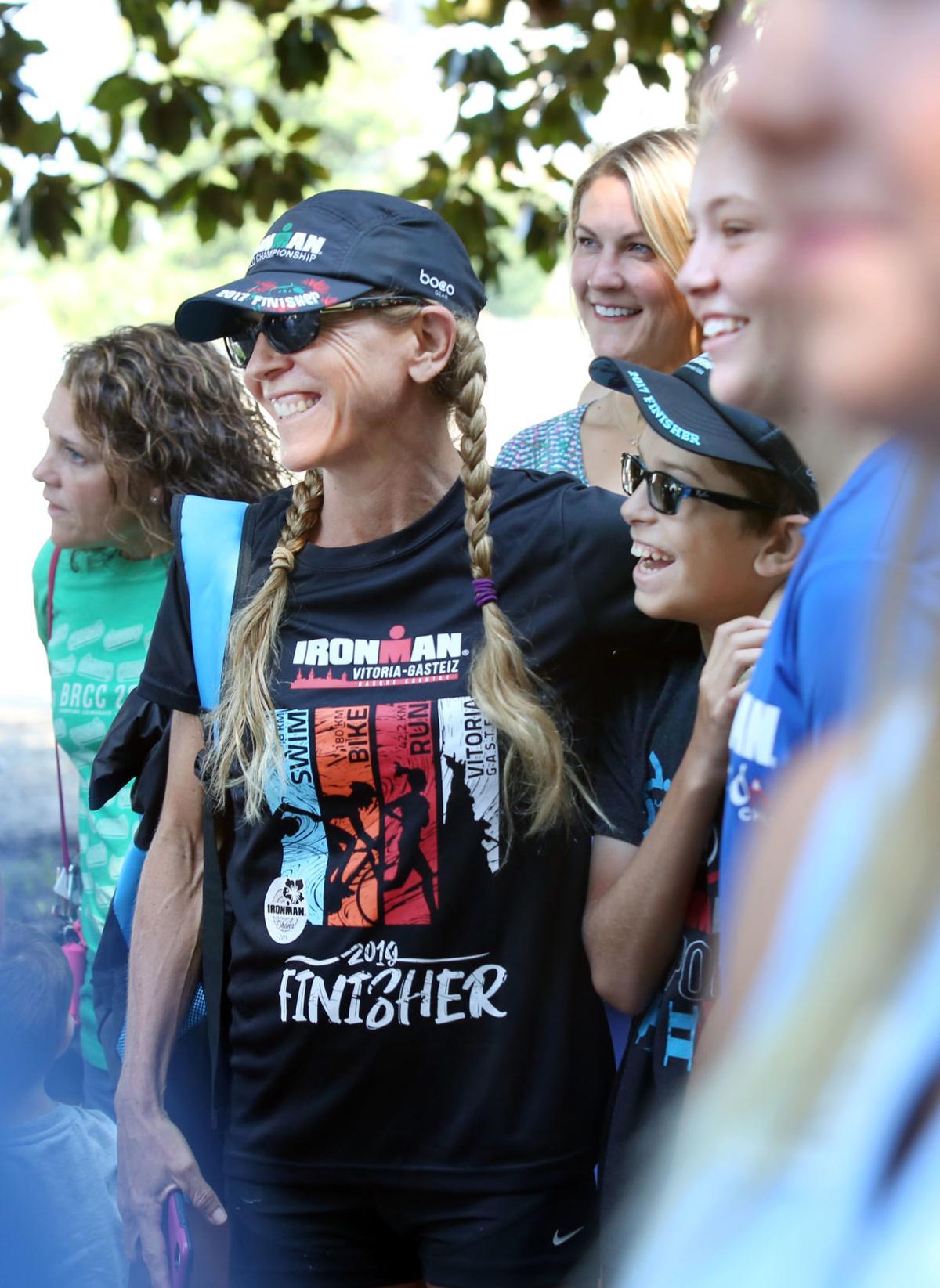 Beni Gras-Thompson of Roanoke (left center) has competed in previous Ironman events, including the world championship. 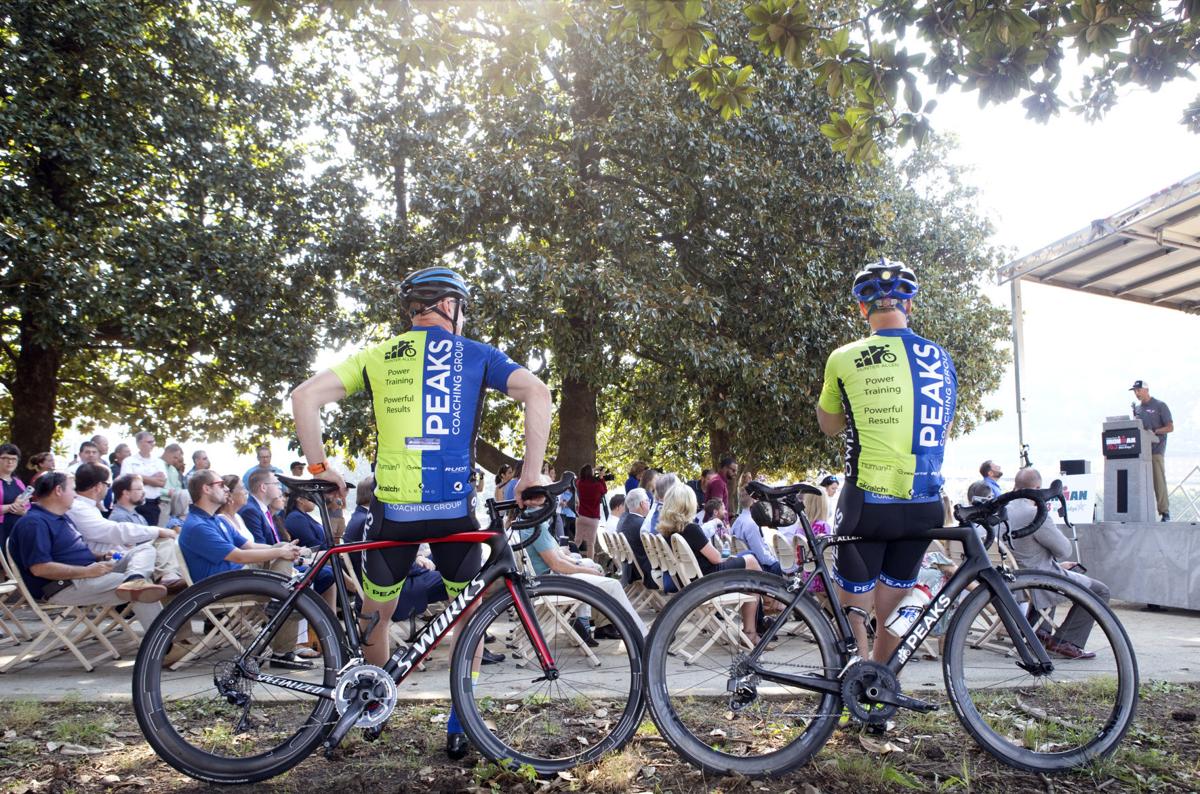 Bikers and triathlon coaches Lee Sandstead (left) and Hunter Allen, both of Bedford, attend the announcement Tuesday at River’s Edge. Ironman is bringing an international triathlon event to the Roanoke Valley in June 2020.

Beni Gras-Thompson of Roanoke (left center) has competed in previous Ironman events, including the world championship.

Bikers and triathlon coaches Lee Sandstead (left) and Hunter Allen, both of Bedford, attend the announcement Tuesday at River’s Edge. Ironman is bringing an international triathlon event to the Roanoke Valley in June 2020.

Next year about 2,500 athletes will swim in Carvins Cove, bike the hills of Botetourt County and run along the Roanoke River Greenway — all in the course of a day.

The Ironman 70.3 triathlon is coming to Roanoke. The city was selected as a three-year host, with the first race scheduled for June 7, 2020. Carilion Clinic will serve as the title sponsor for the triathlon, which includes a 1.2-mile swim, 56-mile bike ride and 13.1-mile run.

The triathlon was previously held in Williamsburg.

Representatives from the city, Carilion Clinic, Visit Virginia’s Blue Ridge and Ironman made the announcement Tuesday morning at the River’s Edge Sports Complex. Ceremonial starting horns blared from the stage, placed at the race’s finish line.

Ironman hosted its first triathlon in Hawaii in 1978 with only 15 competitors. Today, the organization has a global presence, hosting some 200 races a year. Ironman events include not only triathlons, but also running, mountain biking and cycling events, along with an Ironkids race.

Landon Howard, president of Visit Virginia’s Blue Ridge, said the regional tourism agency’s sports team had been actively courting Ironman for about a year. They were eager to make a connection with Ironman, which Howard described as a “huge sports brand.”

“Hosting an Ironman 70.3 puts us on the international sports map,” he said. “People from all over the world will come in to compete for this event.”

The total economic impact of the race is estimated at $9.2 million each year. Howard said no other event in the region is comparable.

“This should be the largest international event that we have ever hosted in the Roanoke region and all of Virginia’s Blue Ridge,” he said.

The triathlon is expected to draw about 2,500 athletes, many of whom are likely to bring family and friends. Officials anticipate that the bulk of the racers — an estimated 92% — will be visitors, rather than locals. An additional 2.5 visitors are expected per athlete.

This spring, VBR launched a million-dollar campaign urging tourists to “Be a #Trailsetter,” showcasing the mountains and the region’s outdoor amenities.

“The Ironman event fit perfectly with that,” Howard said.

When Keats McGonigal, senior regional director for Ironman, visited Roanoke he quickly decided it was a venue athletes would be excited about.

“It’s a beautiful area, there’s great local support for endurance events like this and it truly delivers the world class experience that our athletes have come to expect,” McGonigal said.

Roanoke had not only the desired course elements, McGonigal said, but also the “ancillary pieces” like hotels, restaurants and a vibrant craft brewing scene that makes the event enjoyable not just for athletes, but also the family and friends accompanying them.

“It’s about being a location that people want to go and spend two, three, four days at,” he said. “We want true destination locations.”

McGonigal said it’s common for Ironman to enter into multi-year agreements with host cities, as it did with Roanoke. The first year requires a lot of planning, and the lessons learned can be applied to future races, benefiting both Ironman and the host city.

When Ironman officials were briefed on the plans for medical logistics, they were met with a familiar face. Dr. Thomas “TK” Miller is the vice chair of orthopedics and chief of sports medicine at Carilion and also serves as chairman of the Ironman Global Medical Advisory Board.

Though Miller has been involved with the Ironman organization for years, he wasn’t actively lobbying to bring the race to his own backyard.

“I never expected this to happen here,” Miller said.

He always believed Roanoke could put on an incredible race but knew becoming a host city was challenging. That Roanoke was successful in its bid to attract Ironman shows that the right people are in place promoting the region, and also how far the community has come, Miller said.

The region has built its outdoor credibility over the years, with events like the Foot Levelers Blue Ridge Marathon and recognition by groups like the International Mountain Bicycling Association.

“Ironman looks for communities that will embrace this,” he said. “They can put their event anywhere and they certainly have events that are in big locations, but they very much want an event that the community is going to embrace.”

Dr. Randy Clements, chief of podiatry at Carilion, also helped to bring Ironman to Roanoke. When a space in the Ironman schedule was pointed out to Clements, he reached out to Ironman officials and suggested they bring the race here. Aside from competing in Ironman events, Clements didn’t have a connection to the organization.

When Clements got the list of prerequisites for a host city, it seemed a bit daunting. But then VBR got involved and Carilion signed on as the title sponsor. It all came together more easily than he expected, he said.

Finding a swim venue could have been a challenge. But the Western Virginia Water Authority approved use of Carvins Cove, where swimming is ordinarily not permitted.

The authority’s board carefully weighed the decision, but ultimately decided it was an “extraordinary opportunity to showcase” the region, said spokeswoman Sarah Baumgardner.

Authority officials consulted with other Ironman swim venues where the activity is not ordinarily permitted or the water is used for drinking, like Carvins Cove, she said.

The authority’s chief concerns were safety and aesthetics, Baumgardner said. Treating the water was less of a worry.

“We treat water from Smith Mountain Lake and use it as drinking water,” she said. “We know how to treat water.”

Ultimately, Ironman representatives addressed the authority’s concerns and assured officials they would leave the reservoir as they found it, Baumgardner said. She also noted that athletes who try to get in a practice run at the cove before race day will be disqualified.

Beni Gras-Thompson of Roanoke has competed in numerous Ironman events, including the world championship. But she’s never had the opportunity to do it here at home — until now.

“I know how much fun Ironman races are,” she said.

At the finish line, it’s one big party. Gras-Thompson said the vibe and the crowds at some of the Ironman races she’s run remind her of the Tour de France.

“I’m hoping that Roanoke comes out like that,” she said.

Gras-Thompson expects the Roanoke Valley to be well represented. She certainly plans to participate.

“I hope every triathlete in the area participates,” she said.

But she said Ironman isn’t just for experienced athletes. Gras-Thompson said she believes anyone who puts their mind to it can cross that finish line.

Mayor Sherman Lea said the city and its residents, who take great pride in their southern hospitality, are excited to welcome these athletes to Roanoke.

He thanked Ironman officials for recognizing the Roanoke Valley’s potential.

“Let the planning, training and fun begin,” he said. “See you back in Virginia’s Blue Ridge in June of 2020.”

For more information about the Ironman 70.3, visit https://www.ironman.com/triathlon/events/americas/ironman-70.3/virginia-blue-ridge.aspx#/axzz5vB5YEOLB

It was a race to the finish to bring Ironman to the Roanoke Valley.

Organizers of the Ironman 70.3 triathlon are seeking approval to close a roughly 20-mile section of the Blue Ridge Parkway for the June race.