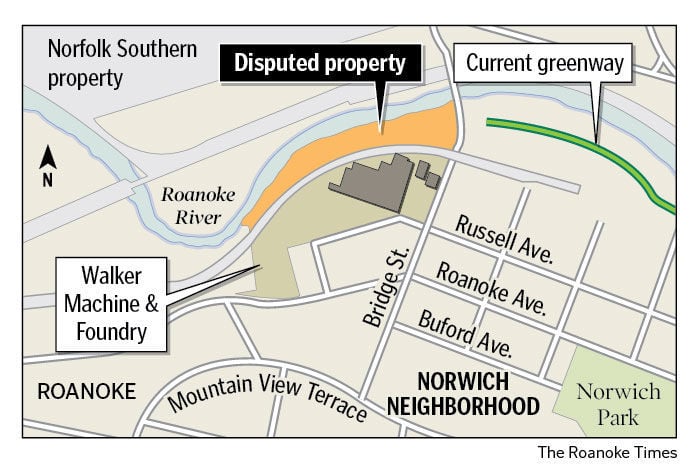 Walker Machine & Foundry has withdrawn its lawsuit in state court against Roanoke over using its land for a greenway, but intends to sue the city in federal court instead.

Meanwhile, the company is no longer making castings, has sold off or scrapped equipment and has put the factory and land up for sale.

Walker blames the city’s threat of using eminent domain to take five of the foundry’s 16 acres in the Norwich neighborhood for creating an air of uncertainty around the business that drove customers away and ruined the business.

Though the company is down to just a few employees, it still exists and anticipates continuing its fight with the city in U.S. District Court. Walker’s Norfolk-based attorney, Joe Sherman, believes that’s the proper venue for the case.

And thanks to a U.S. Supreme Court ruling that came three days after Walker sued the city in Roanoke Circuit Court, the company can now take its case to federal court.

“Given that they have lost everything, it makes sense to give it the time and attention it deserves,” he said.

“We were surprised with the motion for nonsuit,” Roanoke City Attorney Dan Callaghan said, “and we’ll deal with the next issue when it comes up.”

According to recent court filings by Walker, the 100-year-old company ceased manufacturing metal castings in May, and in August told city officials it needed to sell its land and factory.

Since then the company has sold off special equipment and sold its “book of business” — or customer base — to another company, the filings say. Other equipment was scrapped.

Walker and the city had been at odds since 2015 over the city’s desire to extend the popular Roanoke River Greenway west from Bridge Street in Norwich across Walker’s riverside land.

The company opposed the plan because leaders believed putting a linear park immediately adjacent to its plant would imperil its air quality permit from the Virginia Department of Environmental Quality, without which it can’t operate.

The Roanoke City Council authorized use of eminent domain — a government’s power to take private land for public purposes, while paying the owner a price determined by a court — to push the greenway through, but the city never exercised that authority.

But on June 18, Walker filed its lawsuit against the city. Sherman said that was necessary to preserve its chance to sue because the statute of limitations was about to expire, but the company hoped to continue to negotiate.

Walker’s central claim was that the city’s threat amounted to an “inverse condemnation” — a claim that the city in effect took the land because its threat of taking it devalued it.

Instead, negotiations ceased and the parties went to court, but Walker’s lawsuit did not fare well.

On Oct. 22, Sherman filed an amended complaint in the case that included a thousand pages of exhibits and spelled out Walker’s declining business from $330,000 in sales to 177 customers in 2015 to about half that amount to 140 customers in 2018.

Among the exhibits is an email from an executive with Walker client Kerotest Manufacturing Corp. asking Muzzy if the foundry will be put out of business and if so, how much notice customers will get.

The lawsuit also claims a foundry company from the western U.S. considered buying the Walker plant but decided against it because of concern about the greenway project.

Sherman said the lawsuit should have been filed in federal court from the beginning, but under a 1985 U.S. Supreme Court ruling, Walker was required to exhaust state-level remedies first.

That changed, however, with a Supreme Court case called Knick v. Township of Scott. In its June 21 opinion the court overturned the previous ruling and allowed claims to be filed first in federal court under the Fifth Amendment.

Walker Machine & Foundry sought to nonsuit the case in state court Nov. 7 and the motion was granted Wednesday.

It’s unclear what would happen with the proposed greenway if the foundry property is sold.

But marketing materials for the property lay out how the site could be redeveloped for a nonindustrial use.

The drawings to show possibilities for the site show a canoe launch, a fishing trail, a string of picnic tables and the completed Roanoke River Greenway.

Judge pares down foundry's lawsuit against Roanoke, but won't dismiss it

Great Job, Roanoke Mayor and City council! You have put an old and respected business OUT of business! You have also proved yourselves to be a pack of LIARS! You claim you want new industry, but rather you run them out of business! I hope Walker gets millions out of you in court!

The foundry didn’t fit the Democrat idea of what a “good” industry should be. Maybe they should have considered building a brewery on their parking lot.

Sorry to disappoint the partisan kids in the playroom, but the Mayor and the Council had nothing to do with Walker's sale. Walker's position on this has been sketchy all along and now it makes 100% sense. Walker was playing a waiting game and rolling the dice on how much money they could get...And go out of business...it would either be through a financial reward via litigation, or a legitimate sale of their assets, or both! This is and has been all Walker's dishonest and bad neighborly actions. Years ago, Walker could have easily gotten the permits and worked with the city on the Greenway. Cities across the country work with private industry all the time for far more complex projects. This is Walker literally walking away from a toxic site, that wasn't doing well as a business to begin with. Existing issues with their own property, Trump's China Tarrifs, and other forces are what are making Walker sell. That's just facts. But we know the trolls don't care for facts. The win is, Walker's law siut will be tossed because it has no validity now, and they'll sell and we'll get a better owner who'll do something more profitable with the parcel.

Did you read the article? Did you understand it?