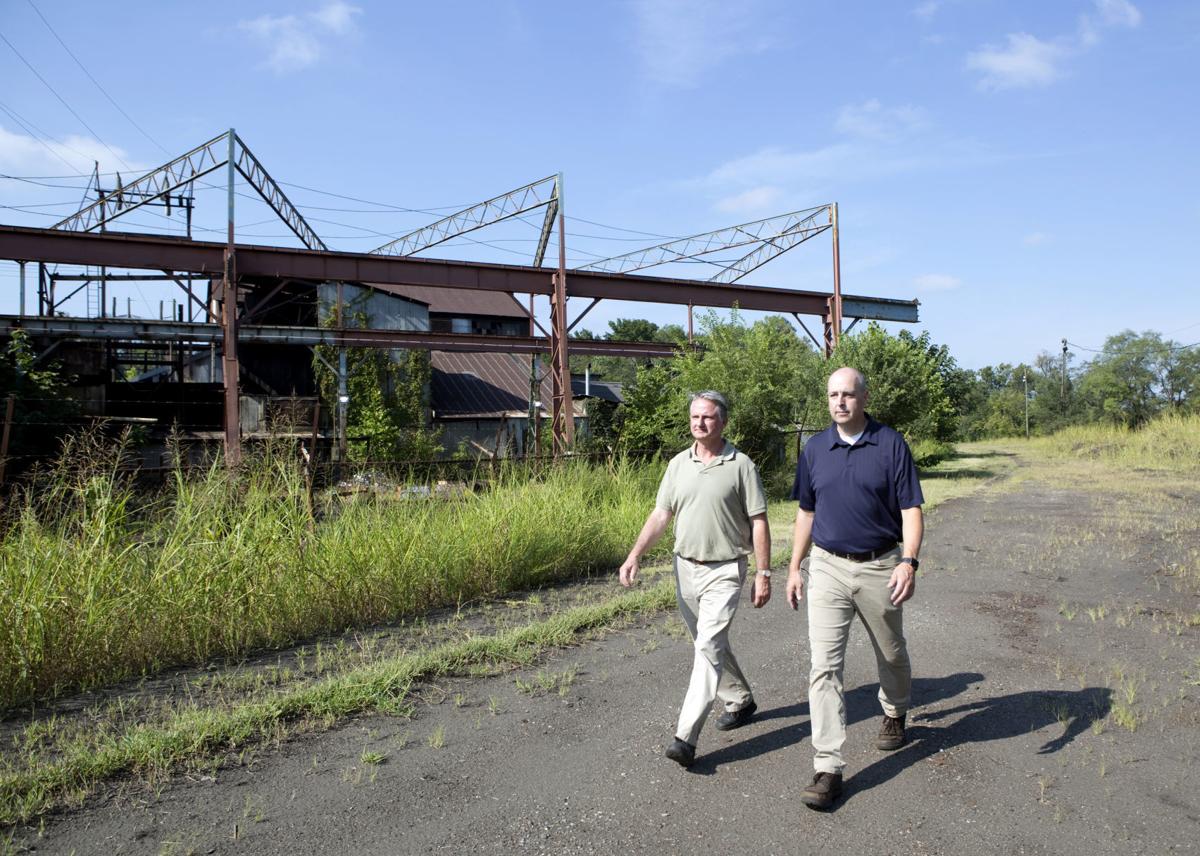 Walker Machine & Foundry is located at Irvine Street and Bridge Street Southwest in the city’s Norwich neighborhood. This year is the foundry’s 100-year anniversary. The business manufactures industrial iron castings on site. The area Roanoke wants to connect the greenway would run close behind the northern edge of the plant. 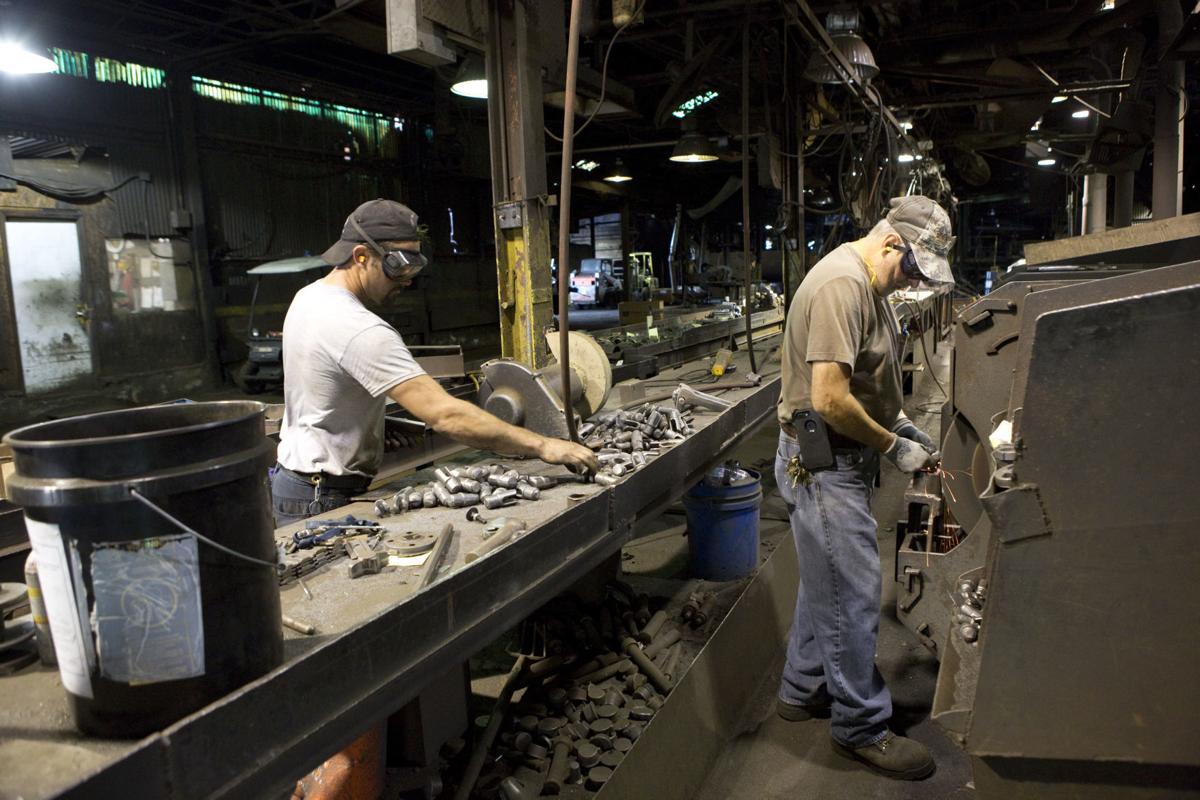 Matt Kendrick ( left) and Kenny McCraw work on Friday at Walker Machine & Foundry, where they make industrial iron castings. This year is the company’s 100th anniversary.

Walker Machine & Foundry is located at Irvine Street and Bridge Street Southwest in the city’s Norwich neighborhood. This year is the foundry’s 100-year anniversary. The business manufactures industrial iron castings on site. The area Roanoke wants to connect the greenway would run close behind the northern edge of the plant.

Matt Kendrick ( left) and Kenny McCraw work on Friday at Walker Machine & Foundry, where they make industrial iron castings. This year is the company’s 100th anniversary.

Walker Machine & Foundry and Roanoke city officials were negotiating and “closing in” on a deal that seemed “imminent” to sell the city land to complete the Roanoke River Greenway just before Walker sued the city in June, company officials said.

Walker President Glenn Muzzy and Controller Charlie Kostelni said the company had to file the lawsuit to protect its interests because as they interpreted the facts, the statute of limitations expired after June 18. The “inverse condemnation” lawsuit alleges the city’s threat of using eminent domain to take foundry land for the greenway damaged the foundry’s business by driving away customers.

The first hearing in the case, on the city’s motion to dismiss the lawsuit, is set for Aug. 30.

But Muzzy and Kostelni said they had hoped to continue negotiating with the city.

That hasn’t happened. However close the parties were, all talks have been chilled by the legal action.

“We cleared a lot of things up and we really looked like we were closing in on it,” Kostelni said. “To the point where we thought it was imminent that we were going to close that gap and get it done.”

Neither would say what gap remained.

Letters between Walker’s Norfolk-based eminent domain attorney Joe Sherman and the city’s private local counsel, Ron Ayers, which Sherman shared, show that in early April, the two sides were $1 million apart on a price for about 5 acres of Walker property. It’s unknown what other considerations besides money were involved.

Kostelni said by June, when the last of three dozen in-person meetings and conference calls with the city occurred, the difference was “much less” than $1 million.

Roanoke City Attorney Dan Callaghan said the city doesn’t comment on pending litigation but he acknowledged the city negotiated with Walker prior to the lawsuit.

“The city is disappointed that Walker Foundry’s attorney decided to reveal substantive terms of confidential settlement negotiations,” he added.

Sherman said he shared with The Roanoke Times only letters not labeled “Confidential: Settlement Communication.”

Muzzy and Kostelni offered an interview to address a statement in the city’s response to their lawsuit, quoted in the newspaper, that said the foundry “has consistently resisted the city’s efforts to voluntarily purchase the property and even though other landowners have voluntarily conveyed property rights to the city for construction of the greenway.”

“That’s just not true. We’ve tried,” Muzzy said. “We were very active in trying to get it done.”

‘Willing to accept the risk’

The city and Walker have been more or less at odds over the city’s desire to build the greenway across land the foundry owns between its factory and the Roanoke River in the Norwich neighborhood since 2015, when the city initially offered Walker $79,000.

Muzzy said the land in question has been inaccurately characterized in media reports as small and inconsequential.

“That’s the public’s perception, that it’s way out back and we don’t use it and we won’t even notice it’s gone,” he said.

In fact, he said, at 5 acres it’s one-third of the property Walker owns and it is still used for storage of equipment and casting sand used in the foundry’s production process.

Walker maintained that introduction of the greenway on the land adjacent to its castings and machining operation would be a substantial enough change in conditions to imperil the air quality permit from the Virginia Department of Environment Quality that allows the foundry to operate.

After fruitless discussions in 2015, talks between the two went largely dormant for a few years, during which the Roanoke City Council authorized the city administration to use eminent domain to take land from Walker for the greenway.

Sherman notes that the August 2017 authorizing ordinance “directs” staff to use eminent domain, while the city’s response to the Walker suit cites language in the ordinance that condemnation could be used “if negotiations are ineffectual.”

In a footnote in its response, the city said it didn’t know negotiations were “ineffectual” until Walker filed its lawsuit.

That same year, the city also bought an abandoned Norfolk Southern rail line that bisects the Walker property near the proposed greenway route to either build the greenway on or, then-City Engineer Phil Schirmer told The Roanoke Times, to use as leverage to get Walker to part with the land the city prefers closer to the river.

The latest talks between the two parties began in fall 2018 when the city asked Walker officials for their best offer to sell the land that the city needs for the greenway, Muzzy and Kostelni said.

Kostelni, who had joined the company earlier in the year, urged Muzzy and others to find a way to reach a deal.

“I would have been proud to have been part of finishing the greenway,” Kostelni said.

While the company still maintains that the greenway’s presence could imperil its air quality permit, leaders decided if they could obtain enough money from the sale of the land, they could make modifications to their operation that would protect the permit.

“We were willing to accept the risk and that’s why we made the proposal we did,” Kostelni said.

“When it comes to willingness to get this done, we’ve been the most willing partner they’ve had,” Muzzy said of the city.

He pointed out that plans to cross the river and build that section of the greenway on the north side on Norfolk Southern Railway land didn’t work out. Nor did a plan to bring the greenway to the foundry’s south on existing public right-of-way before coming back to the edge of the river.

Callaghan, the city attorney, called it a “mischaracterization to suggest that other property owners were not cooperative.”

“The reason those did not proceed,” he said, “was they were determined not to be feasible for the city and the property owner based on the unique circumstances of the property and project costs to build the greenway, not to acquire the easement.”

For example, building on the north side of the river in that area would have required a bridge that would cost millions of dollars.

“Every other property owner in the area negotiated with us and sold us an easement,” Callaghan said. That includes the railroad and Walker’s neighbor to the west, Associated Asphalt. The greenway path crosses land owned by both.

Walker also sold land it owned upstream to the city for the greenway without hesitation, Muzzy pointed out.

“Where it didn’t impact us, we were perfectly willing to cooperate,” he said.

‘We’re not closing up’

But in its lawsuit, the foundry maintains it already has been seriously affected by the threat of the city taking the land.

Business is off significantly, with some customers saying explicitly that they’re concerned the foundry won’t be in business for the long term, Muzzy said.

The castings industry in the United States has been strong the last two years, Kostelni said, with more castings capacity needed than is available.

Richard Jefferson, vice president of marketing and communications for the American Foundry Society, a trade group, confirmed that was the case due largely to a successful effort to “reshore” castings production that had gone overseas.

The company, which is a century old this year, employed 70 people in 2015. In May, that number was 45, Kostelni said.

Last week, it was down to eight.

“We’re not closing up,” Muzzy stressed. “Our customers are our top priority. We’re going to continue to take care of our customers, but we’re making significant changes to do that.”

Judge pares down foundry's lawsuit against Roanoke, but won't dismiss it

A Roanoke judge significantly whittled down Walker Machine & Foundry’s lawsuit against the city of Roanoke on Friday, restricting the time…

Greenway holdout Walker foundry ceases production, land up for sale, but lawsuit against Roanoke to continue

Walker Machine & Foundry has withdrawn its lawsuit in state court against Roanoke over using its land for a greenway, but intends to sue t…