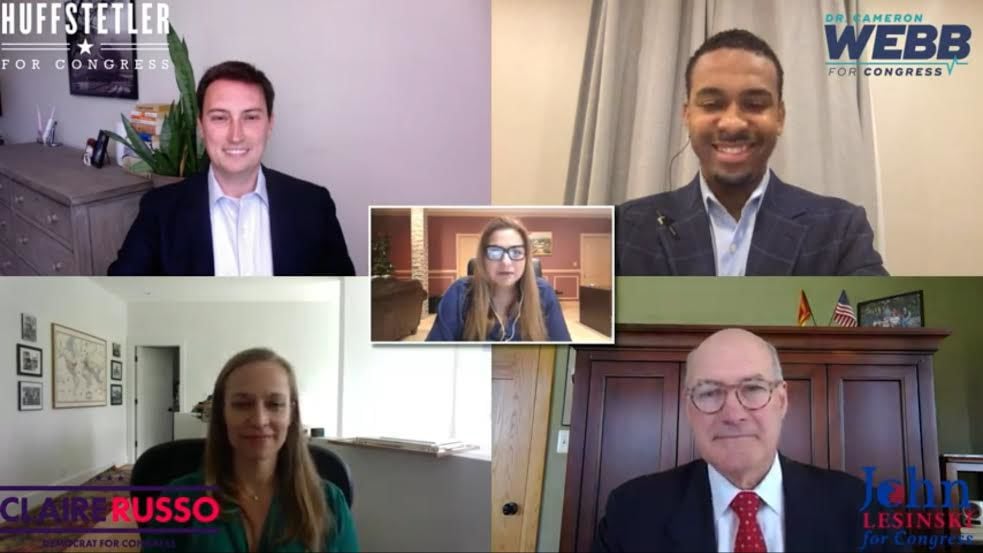 Addressing the inequalities in the United States exacerbated by the coronavirus pandemic served as a major motivational force for Democrats running for Congress in central Virginia.

Political campaigns have had to adjust how they get the word out to voters while maintaining social distancing. So instead of a forum held at a high school or community center before a crowd of voters, the four Democrats participated in an online forum on Saturday.

The candidates all brought the issues they discussed, from health care to voting rights, back to the coronavirus pandemic as a reason to make bold improvements to policy at the federal level.

The four candidates are:

• Roger Dean Huffstetler, Marine veteran and Charlottesville entrepreneur who lost the Democratic nomination for the same seat two years ago

• Cameron Webb, director of health policy and equity at University of Virginia

Voters will choose their nominee June 23. The Democrat will face Rep. Denver Riggleman, R-Nelson, or Bob Good, who are competing in a heated convention that will take place in the next several weeks at a date still to be determined. While the district is favorable to Republicans, House Democrats are targeting the seat.

The 5th Congressional District is Virginia’s largest district, stretching from Fauquier County to the North Carolina border and including Franklin County and part of Bedford County.

Health care and economic inequality emerged as two of the most pressing issues during the forum, moderated by Del. Elizabeth Guzman, D-Prince William.

“This coronavirus pandemic has told us one thing: 2020 will be the health care election,” said Webb, who has made fixing the health care system the main focus of his campaign.

Webb, an internal medicine doctor, said making sure people can access affordable health care is more complicated than a three-word slogan. He worked on a White House health care team during the Obama administration to help implement the Affordable Care Act. He said the country can do better than having health insurance tied to employers, and there should be a public option.

“This pandemic has clearly demonstrated to all of us that every American must have access to health care,” Russo said.

The candidates said the pandemic has fueled a large growth in telemedicine. But Lesinski said people in rural areas don’t have that same access because they lack broadband.

He said that as the country emerges from the coronavirus crisis and tries to rebuild its economy, rural America will fall behind unless it has the broadband needed to attract employers and to allow for people to work from home.

“It’s the rural electrification issue of our time,” Lesinski said.

Huffstetler emphasized his family’s working class roots and said his campaign is focused addressing economic inequality. He said the economy has been changing, and people don’t always keep the same job for more than 30 years, and workers need to upgrade their skills. He’d like to work on developing a program so community colleges and industries partner together to maintain a skilled workforce.

“My legislative priorities are making sure that when people work hard in this country, the country has their back,” Huffstetler said.

Russo said the federal government did not prepare for the pandemic as it should have done. Citing her own background as a Marine officer training Marines and an intelligence officer learning lessons from past wars and applying them to the future, she said she’s equipped to work on steering the country out of the crisis and preparing for future ones.

“It’s never been more clear that it’s going to take bold leadership to guide this country out of this crisis in a fair and just manner,” Russo said.

Lesinski connected the poor planning for a viral outbreak to the lack of bold action on climate change. Climate change is a legislative priority for Lesinski, who said reducing the country’s carbon footprint and shifting to renewable energy will create new jobs.

“It’s a canary in the coal mine for fighting climate change, because if we don’t get on this now, we’re going to lose a lot more lives,” he said.

The candidates all agreed that the pandemic has highlighted the need to expand voting rights. Huffstetler said there should be automatic voter registration when people get their driver’s license. He said working people can’t always make it to the polls on Election Day, so he said being able to vote absentee without providing an excuse is essential.

“There is no reason under the sun we should be making it harder to vote,” Huffstetler said.

Lesinki said that even though states are making progress in expanding voting rights, more needs to be done at the federal level. He referenced the federal court decision this week to waive the witness requirement to cast absentee ballots in the June primaries in Virginia.

Republicans tried to retain the witness requirement, citing the risk of voter fraud. There is no evidence of widespread voter fraud with voting by mail.

“The strategy here clearly is voter suppression, voter suppression of those individuals the Republican Party feels is going to be a continued threat to them winning or gaining a majority,” Lesinski said.

“I think when we field the full team as Democrats, when we expand the electorate, we win,” Webb said.

Rep. Denver Riggleman is being himself