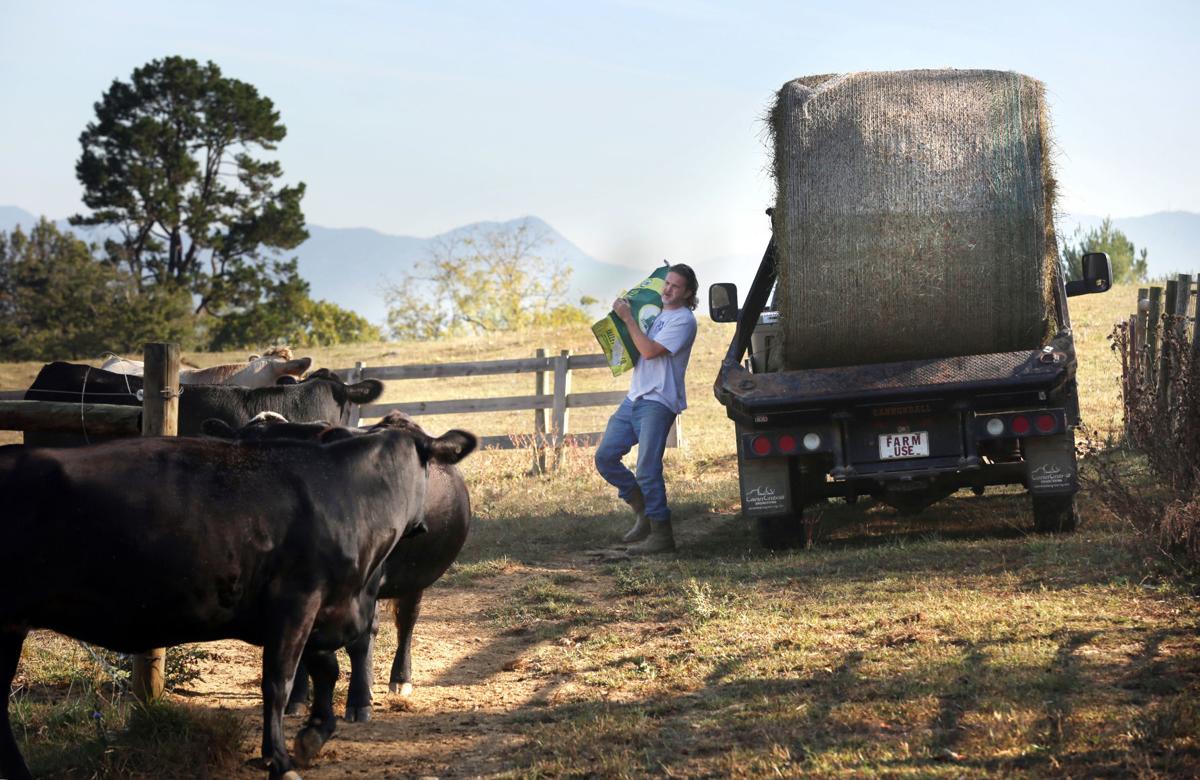 Dried-out pastures are forcing beef cattle farmer Kevin Marshall to resort to feed and hay months earlier than he normally would. Marshall tends to his cows in a Buchanan field on Thursday. Although he began feeding hay early, Marshall expects to have enough to make it through the winter. But he won’t have any left to sell, which means losing a source of income. 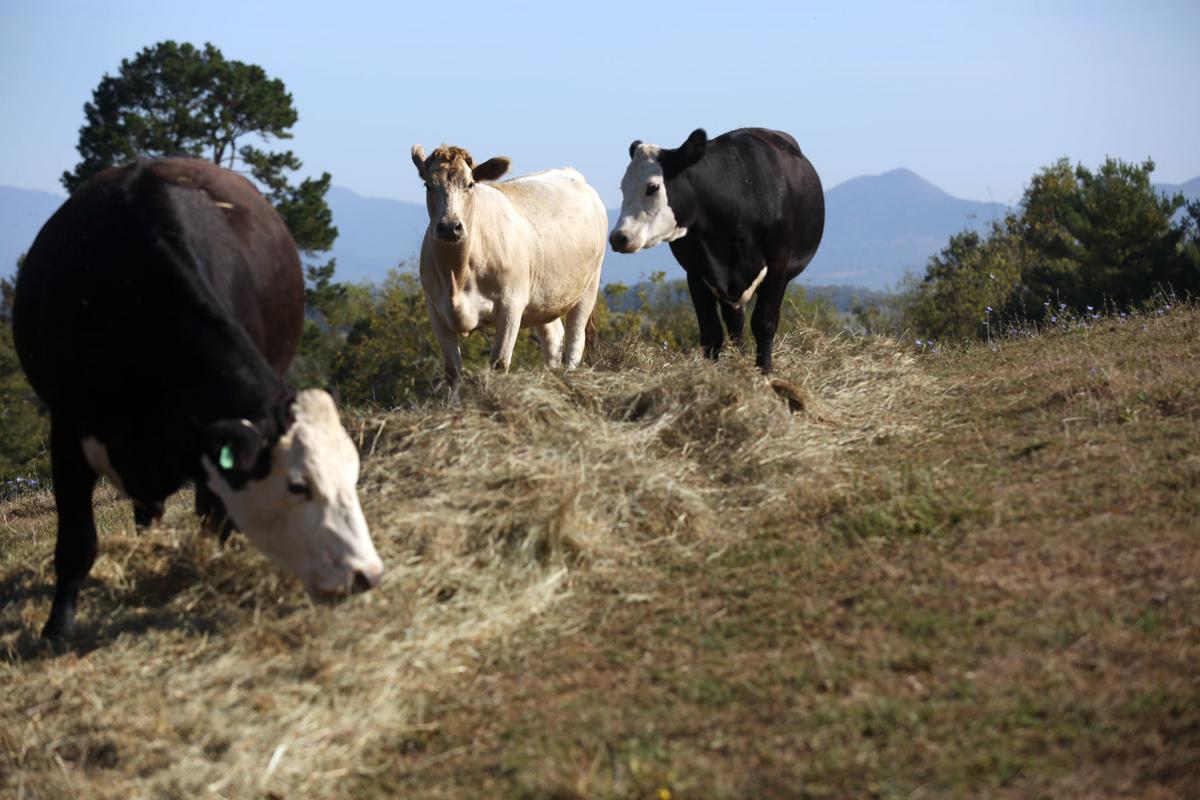 The region is experiencing drought, prompting many cattle operations to feed hay earlier than normal. 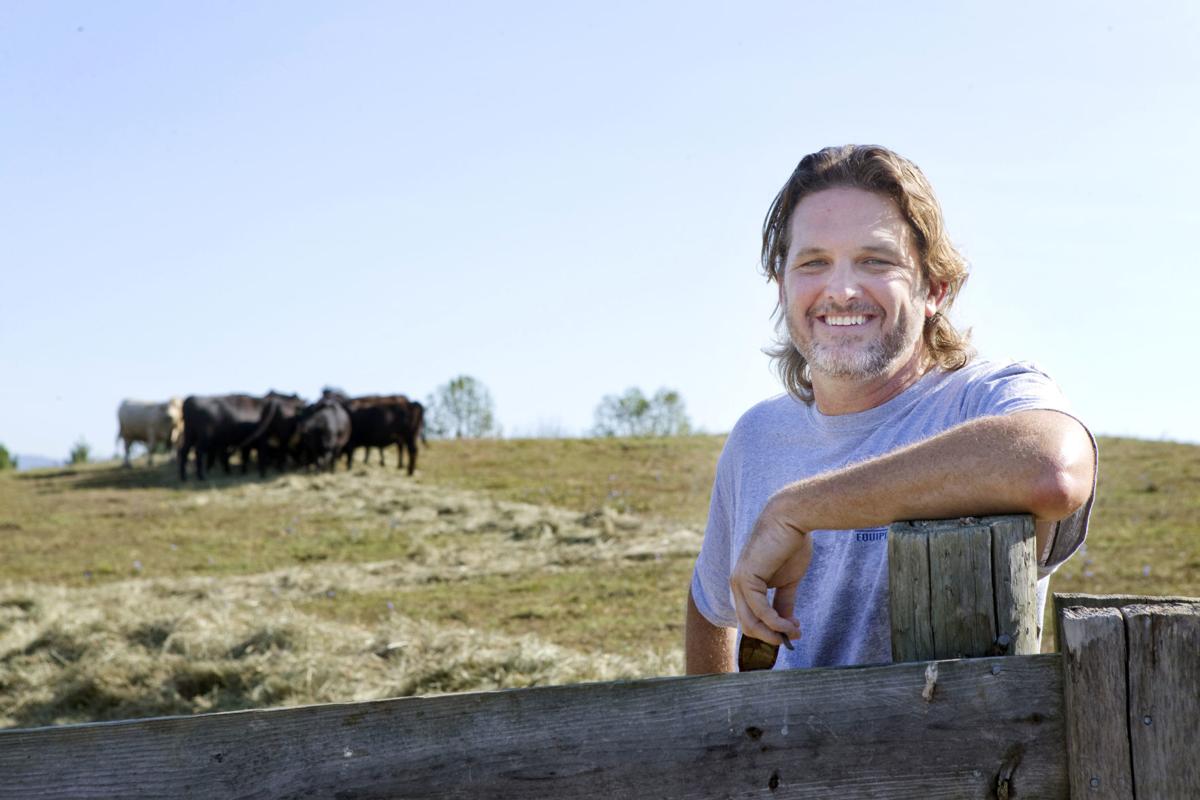 Botetourt County cattle farmer Kevin Marshall stands in a field of dry grass in Buchanan with some of his herd.

Dried-out pastures are forcing beef cattle farmer Kevin Marshall to resort to feed and hay months earlier than he normally would. Marshall tends to his cows in a Buchanan field on Thursday. Although he began feeding hay early, Marshall expects to have enough to make it through the winter. But he won’t have any left to sell, which means losing a source of income.

The region is experiencing drought, prompting many cattle operations to feed hay earlier than normal.

Botetourt County cattle farmer Kevin Marshall stands in a field of dry grass in Buchanan with some of his herd.

BUCHANAN — Kevin Marshall drives his truck over the parched grass, unfurling a bale of hay behind him. The cows quickly and obediently retrieve their meal, one that’s not usually on the menu this time of year.

Normally at this time of year, the herd would still be grazing at pasture. He said the transition to hay usually takes place in late November or early December.

“When you farm, Mother Nature’s in control and you just learn to deal with it,” he said.

The Botetourt County farmer is cautiously optimistic that he’ll have enough hay to make it through the winter. Marshall was able to bale a lot this spring and earlier in the summer. But ordinarily, he has extra to sell, creating another source of income.

Additionally, Marshall will have to consider selling calves that he’d normally hang onto until December or January. Doing so means selling them at a lower weight, thus fetching him a lower price.

Inability to sell excess hay, coupled with the disappointing returns for low-weight calves likely will translate to a loss of 30%, Marshall estimated.

In times like these, Marshall reflects on the words of his father: “He’d say, ‘Don’t worry, son. It always rains after a dry spell.’ ”

Farmers across the Roanoke and New River valleys are waiting for that rain to come. The U.S. Drought Monitor indicates most of the region is experiencing a moderate drought, but in parts of some counties it’s considered severe.

It’s a stark contrast to 2018, which was an exceptionally rainy year — the wettest on record in Roanoke.

Covington and Wytheville each measured less than a quarter-inch of rain last month, the third driest September on record at each of those locations.

While there have been periods of scattered showers and storms that have dumped heavily on isolated areas while missing most locations, the last area-wide general rain fell July 23, and was under an inch in most locations.

The heat and drought have taken a toll on the agriculture industry. Cattle operations like Marshall’s have been affected, along with growers of some produce, like apples.

The latest crop report from the U.S. Department of Agriculture’s Virginia field office, released Monday, indicates 40% of pasture was deemed in very poor condition. So far this year, 67% of apples have been harvested, which is down from 74% at the same time last year.

Norm Hyde, with Virginia Farm Bureau, said farmers have gone months without any real rain in some areas. It’s not uncommon for soil to get dry at this time of year, but he said normally a couple of tropical storm systems will help to “refresh” things.

Whatever soil moisture reserves were built up from last year have pretty much been depleted, Hyde said.

The region desperately needs rain. And Hyde said just a thunderstorm or two won’t do.

Kate Lawrence is a cooperative extension agent in Botetourt County, where beef cattle farming is prominent. She said farmers will often stockpile grass, setting aside pasture land for the “dog days of summer.”

Then in the fall, temperatures start to drop and the grass begins growing again, allowing for a bit more grazing before transitioning to hay, she said. But that hasn’t happened yet this year.

Now, stockpiles are depleted and the weather remains stubbornly hot and dry.

“Most guys will make a little bit of extra hay, but not two months of extra hay,” she said. “So we’re going to have people that are going to run out of hay in February.”

At that point, a farmer would try to buy hay. But it’s unlikely neighboring operations will have much to spare, and transporting hay over long distances is costly.

“We’ve already got people that can’t pay their bills and then to think that they’re going to go buy hay somewhere is just totally unrealistic,” Lawrence said, noting the cattle industry is in a “dark place” right now with low prices unrelated to the drought.

The drought also may delay or prevent farmers from planting winter wheat or other cover crops. Unless there’s some moisture in the ground, the seeds won’t germinate, and planting them would be a waste of time and money.

Some farmers are likely to respond to the drought by selling not only calves, but also cows, culling the herd. In that event, the market will be flooded and prices driven down even further.

That’s what Isaac Austin found when he recently sold 47 head. The Botetourt County beef cattle farmer said the animals sold for about half what they should.

The drought caught Austin by surprise. The spring was beautiful, he said, and his farm had plentiful grass and water.

But conditions have changed. A stream on the property, one of the water sources for his cattle, ran dry, something Austin had never seen before. He also started feeding hay in September.

“The grass just dried up and went to nothing,” Austin said.

The good news is Austin expects to have enough hay to make it through winter. With rain in the spring and early summer, he was able to make an “abundance” of hay.

When Mother Nature turns on a farmer, there’s only so much he can do.

“Honestly the way I was taught was just save every penny you can from year to year because you don’t know what’s going to happen the next year,” Austin said. “Luckily I took that to heart.”

Cynthia Martel, a cooperative extension agent in Franklin County, said toxic weeds pose another challenge for any farmer grazing animals. Livestock would normally ignore them, but may be inclined to eat the weeds during a drought. Although grass has gone dormant, Martel said, weeds are thriving.

“The only thing that survives in drought conditions usually are the weeds,” she said.

Martel also advised caution for farmers using equipment out in the fields. A single spark could cause a fire in these dry conditions. Several counties in the area, including Franklin and Montgomery, have burn bans in effect.

Stanley Bowman, a dairy farmer in Franklin County, began working on the farm he currently operates in the fall of 2017. He battled exceedingly wet weather last year and drought conditions this year.

By the end of September, Bowman still had some pasture available for his cows. But he didn’t expect that to last long.

“We have quite the dry weather right now,” Bowman said. “Our pasture’s about depleted, so we’re not going to be able to graze much longer.”

Bowman doesn’t have as much hay as he would like; the drought kept him from making a third cutting. He hopes it will be enough.

In addition to the challenges the heat has caused in feeding Bowman’s cows, he said, it can also negatively affect a cow’s milk production.

Apple orchards have also been affected by the drought. The crop is suffering from sunburn and many trees are dropping their fruit.

“The tree is aborting the mission,” said Mark Woods, a grower in Franklin County.

Woods said he started to observe the sunburn in August, and apples began falling to the ground in September. Just before an apple drops, it might be in fine shape. But usually, the fall results in a bruise, Woods said, meaning it can’t be sold.

To keep apples from hitting the ground, Woods has only one choice: Move quickly through the orchard. In some cases, that requires hiring additional help, though Woods has not yet taken that step.

It’s a tough call to make. Will the extra staff save enough apples to make the money spent on their pay a worthwhile investment?

And finding those workers presents another challenge.

“Not everybody wants to pick on a 95 degree day,” he said.

It’s too early for Woods to estimate what his losses might be. But, Woods acknowledged, “it’s a lot of fruit on the ground.”

“The trees try to save themselves, so they turn loose the fruit,” said Danny Johnson.

Gleaners come to collect fallen apples that can still be eaten from Johnson’s orchard and take them to food banks.

The orchard allows visitors to come and pick their own apples, but Johnson guesses the season will be shorter this year than in the past, when pickers would still find apples on the tree come November. Besides, he said, no one will be interested in picking unless it cools off.

Johnson recalled a recent conversation with a fellow grower.

A moderate drought has taken hold across the Roanoke and New River valleys. Beef cattle farmers in particular are feeling the effects, and are…

Two months before the Japanese attack on Pearl Harbor, there was a hotter October day in Roa…

Some dampness through Wednesday, but it won't solve drought

UPDATE 6 AM, 10/8/2019: Some rain has fallen Monday evening into early Tuesday mainly west of the Blue Ridge and Roanoke Valley, with amounts …

So which impresses you more: Blacksburg scoring its hottest October temperature in 66 years of official records at 94 degrees on Thursday, or …

Virginians should prepare for significant drought, the governor said Friday.