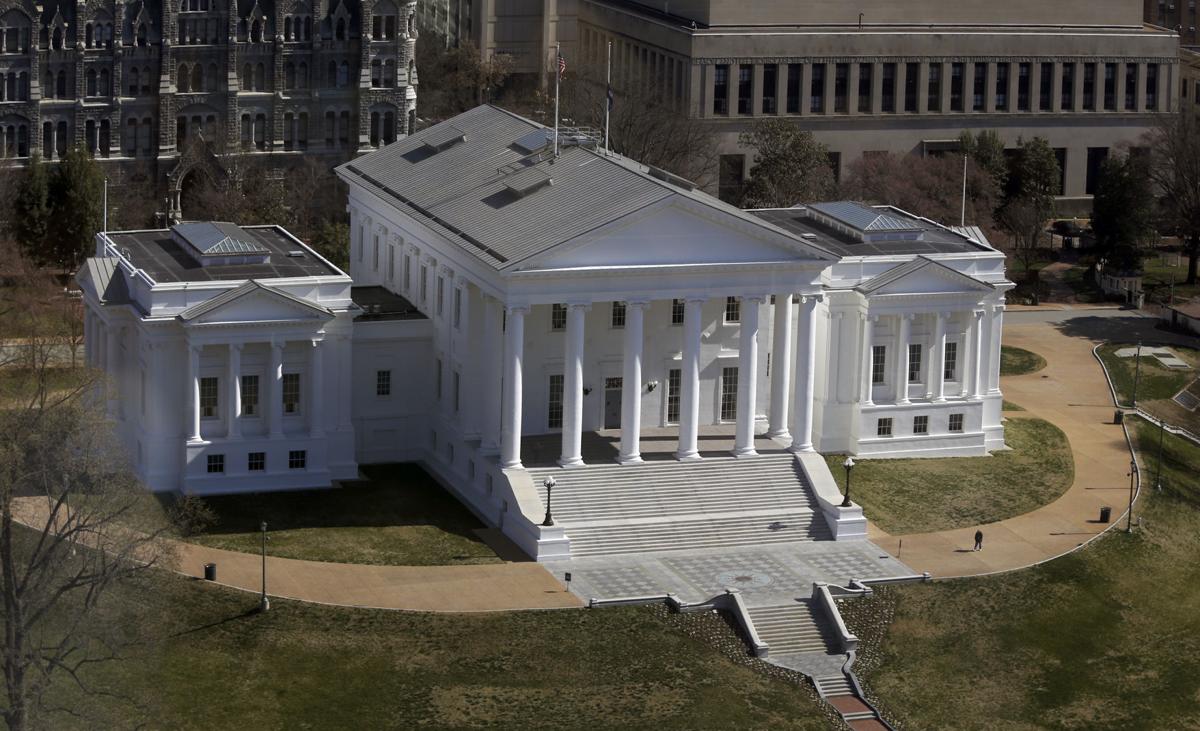 The Virginia Capitol, where the General Assembly convenes today for a 60-day session. 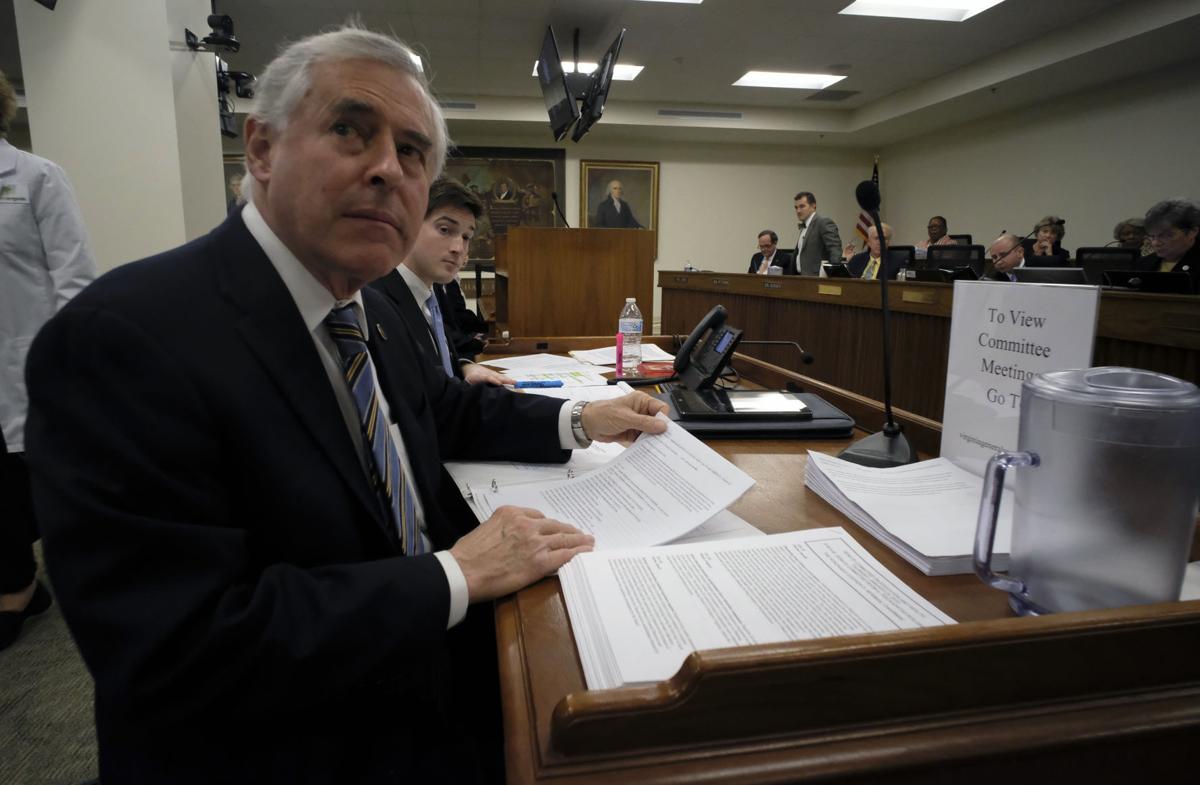 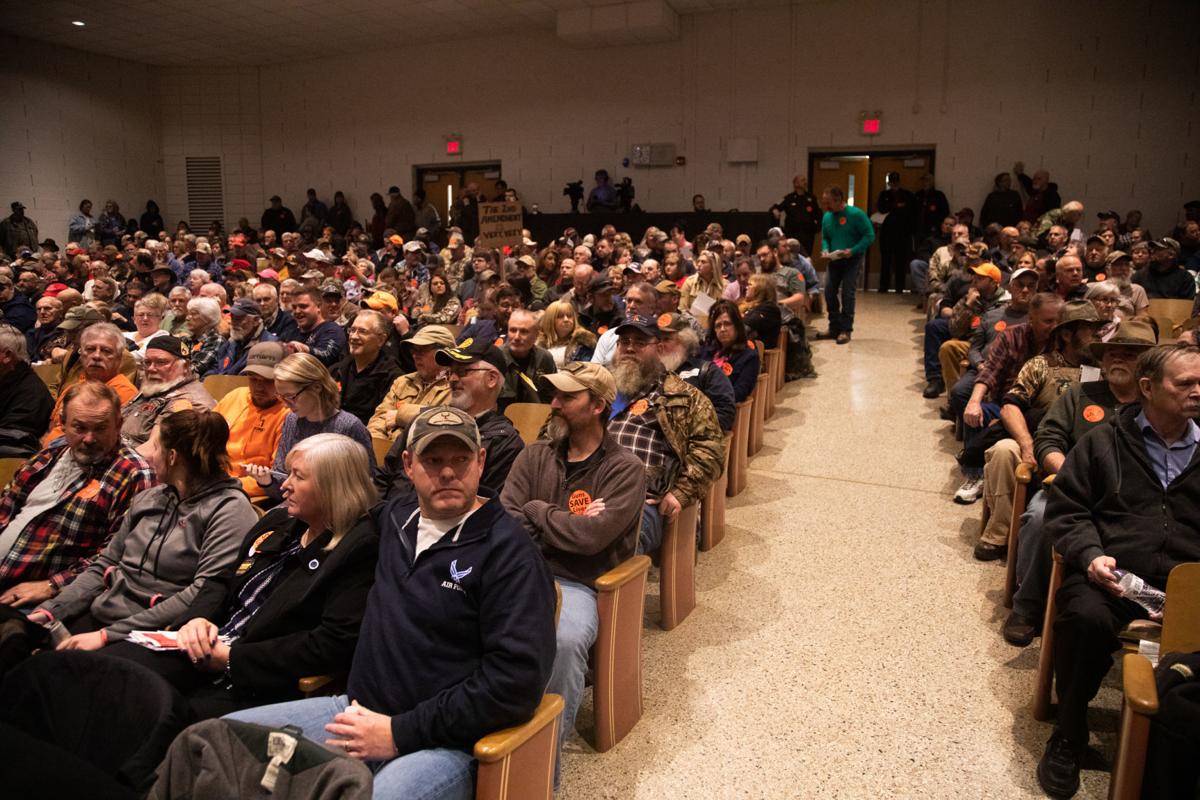 An estimated 1,000 people filled the Liberty High School auditorium for the Dec. 9 Bedford County Board of Supervisors meeting addressing a resolution to make the county a Second Amendment sanctuary. It was one of many such displays of public opinion in local government meetings against the state legislature possibly infringing on gun rights. 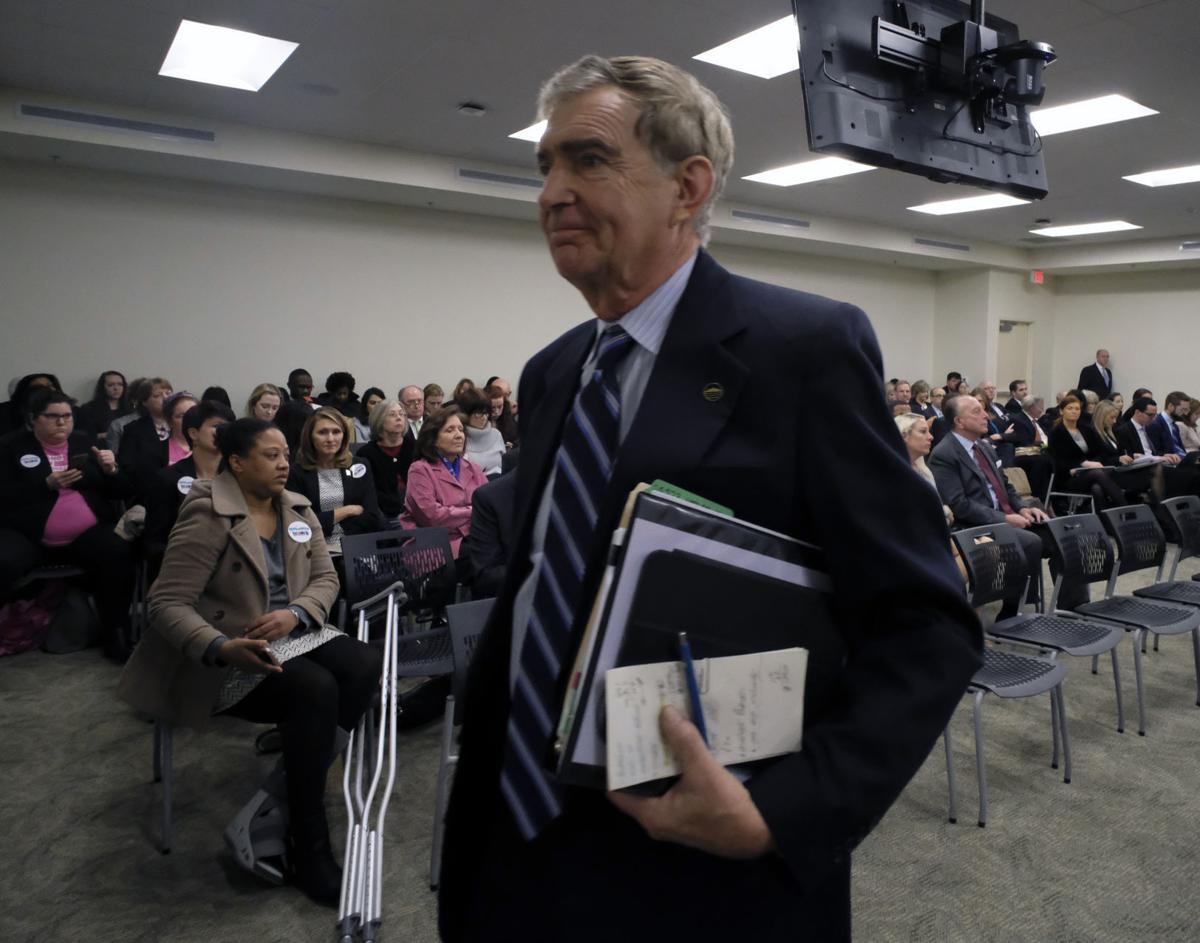 State Sen. Emmett W. Hanger, R-Augusta, has concerns about Gov. Ralph Northam’s spending initiatives. “We may want to ratchet it back a bit,” says Hanger, a 32-year legislator who sits on the Senate Finance Committee.

The Virginia Capitol, where the General Assembly convenes today for a 60-day session.

An estimated 1,000 people filled the Liberty High School auditorium for the Dec. 9 Bedford County Board of Supervisors meeting addressing a resolution to make the county a Second Amendment sanctuary. It was one of many such displays of public opinion in local government meetings against the state legislature possibly infringing on gun rights.

State Sen. Emmett W. Hanger, R-Augusta, has concerns about Gov. Ralph Northam’s spending initiatives. “We may want to ratchet it back a bit,” says Hanger, a 32-year legislator who sits on the Senate Finance Committee.

It’s a new day in Richmond as Democrats assume control of the Virginia General Assembly with a full plate of issues to digest over the next few months.

The 60-day session will open Wednesday with partisan tension as Republicans become the ones who will have their bills die quiet deaths and figure out how to fight off Democratic bills they’ve been killing for years.

Democrats will hold a 55-45 majority in the House of Delegates and a 21-19 edge in the Senate, which is where lawmakers expect more consequential votes to happen among the senators whose politics are closer to the center.

“If they want to pass a bill in the House, they’re going to pass a bill,” said Del. Israel O’Quinn, R-Washington. “I think that the real rubber is going to meet the road over on Senate side.”

Western Virginia is represented mostly by Republicans, and only a few of them have experience serving in the minority.

“There’s a major sea change in Richmond, but our legislative agenda is always the same,” O’Quinn said. “It’s always been about advancing our bills and our region and getting to 51 votes.”

There are only four Democrats from Western Virginia in the legislature: Sens. John Edwards, Roanoke, and Creigh Deeds, Bath, and Dels. Sam Rasoul, Roanoke, and Chris Hurst, Blacksburg.

Plenty of issues — like transportation funding, economic development and allowing casinos in distressed areas — depend more upon regional coalitions than party identification.

“I think you’re going to find this session will be more about regionalism combined with partisanship,” said Sen. Bill Stanley, R-Franklin.

It’s the first time since 1993 that Democrats control the House, Senate and the governor’s mansion. Sen. Emmett Hanger, R-Augusta, expects this total Democratic control to be unlike how it was in the past, a result of increased polarization.

“There’s a feeling that we had a governor who, I think, had relatively conservative roots when he was in the Senate and elected as lieutenant governor, so much that he considered joining our Republican caucus,” said Hanger, who has been in the legislature for 32 years.

“But at this point his thinking has gotten more progressive, and there’s a concern that this particular session might bring about legislation that is not keeping with the overall historic perspective of the commonwealth. Some may be good, and some may be not so good.”

Democrats have a long list of issues they want to get through. Lawmakers expect some Democratic bills to fly out of the legislature that Republicans have previously shut down, such as the Equal Rights Amendment, criminal justice reform, anti-discrimination laws and gun control.

“You’ll see a lot of low-hanging fruit and legislation that will pass, some even with good bipartisan support,” Rasoul said.

Gov. Ralph Northam is backing decriminalizing simple possession of marijuana, ending the suspension of driver’s licenses for unpaid court debt, expanding eligibility for parole consideration based on age and certain medical conditions and various other proposals.

Democrats are also prepared to make it easier for people to vote, such as offering excuse-free early voting and repealing the law that requires voters to present a photo ID .

Democrats are united behind increasing the minimum wage, but repealing the right to work law that says workers don’t have to pay union dues even if they benefit from union wages and contract protections appears unlikely.

Another tough battle will be reclaiming Virginia’s authority to set electric rates. A growing number of lawmakers have been trying to do that, but both parties still accept significant donations from Dominion Energy, one of the state’s influential electric companies.

Edwards said his phone has been constantly ringing .

Roanoke’s Edwards is set to serve as chairman of the Senate Courts of Justice Committee, which will handle gun control bills.

Not so long ago, Edwards was endorsed by the National Rifle Association, but he’s since bucked the organization, saying the “Republican Party is an arm of the NRA and vice versa.”

“Democrats are pretty much in accord with doing something,” Edwards said. “I think there’s a great demand, especially after the shootings in Parkland and Virginia Beach and with the gun violence in urban areas.”

Democrats have filed a slew of bills. Proposals include universal background checks for firearms purchases, expanding the definition of assault firearms and prohibiting ownership of one, civil penalties for not reporting lost or stolen firearms to police, reinstating the state’s lapsed one-handgun-a-month law and giving localities more control in regulating where firearms can be carried.

Edwards said he expects plenty of support for legislation providing local options for local governments to limit or ban guns in government buildings. He said an easy bill to pass will be requiring criminal background checks for all private sales of firearms at gun shows. Currently, they’re voluntary and rarely used at gun shows.

“There will be bills that will pass into law that I will not like but are constitutional,” Suetterlein said. “But there are others that are unconstitutional, and it’s my hope that Democratic legislators that previously were elected on platforms in which they voiced support for their constituents’ Second Amendment rights will abide by that.”

The hot-button issue will attract a lot of attention this session, with gun control and gun rights groups converging on the capitol to lobby lawmakers. Gun rights group Virginia Citizens Defense League has led the push in getting more than 100 cities and counties in Virginia to declare themselves “Second Amendment sanctuaries.”

“The conversation has been escalated to the point that it’s going to be very difficult to defuse it so that we can actually have a reasonable discussion about what can be done for gun safety without infringing on Second Amendment rights,” Hanger said.

Some Democrats have been reconsidering their support for a constitutional amendment to create a bipartisan redistricting commission. The commission would redraw the state’s legislative and congressional maps every 10 years, beginning with the year after the 2020 census, which is why lawmakers say it’s crucial to pass it.

The amendment needs to pass the legislature a second time and then win approval from voters.

“I’m going to push hard on that,” Hanger said.

Currently, the General Assembly draws the maps, allowing the party in power to tilt political power further in one party’s favor by diluting the voting power of the minority party or force out political foes.

“They were fine with the proposed process last year, and it’s only because they would prefer to draw the lines themselves now, although that’s not all of them,” Suetterlein said, who has been pushing for legislation that establishes criteria for drawing the maps.

Among the many proposals Northam has made is increasing the gas tax 4 cents per gallon for three years to bring it to 34 cents, cutting vehicle registration fees and eliminating the annual car inspection.

“As far as transportation funding, it’s clear we don’t have enough money, and this has been going on for a number of years,” Hanger said.

Hanger, who sits on the powerful Senate Finance Committee, said scrapping the inspections is a “non-starter” for him.

“I don’t buy the logic,” he said of inspections having no effect on road safety. He also said it would increase the burden on law enforcement to keep an eye out for vehicles with faulty equipment.

Suetterlein and Del. Joe McNamara, R-Roanoke County, each filed bills to get rid of vehicle inspections before Northam announced his proposal to do so.

“I was pleasantly surprised,” Suetterlein said. “I knew he was a car enthusiast, but it’s surprising because he never indicated that position before and signed an increase in the vehicle inspection fee in 2019.”

Still, Suetterlein said, he doesn’t support the trade-off of eliminating inspections and increasing the gas tax.

Hanger said he worries the governor is proposing spending too much money on initiatives, like tuition-free community college, in a way that can’t be sustained without future tax increases.

“We may want to ratchet it back a bit,” Hanger said.

Democrats are trying to put aside a series of scandals that engulfed the capitol and brought national ridicule .

Northam is focusing attention on all of his big priorities, like Virginia rolling out its own state health insurance marketplace and expanding early childhood education. He’s been promoting dealing with racial inequity, which emerged as a matter of great importance to him after the discovery in February of a photo of a person in blackface and another in a KKK costume on his page in his medical school yearbook.

Attorney General Mark Herring, a Democrat, who admitted to wearing blackface at a party in 1980, is pushing a criminal justice reform agenda.

Democratic Lt. Gov. Justin Fairfax is still trying to clear his name after two women accused him of sexual assault. Republicans last year suggested holding a hearing on the allegations and inviting witnesses to testify. The accusers said previously they wanted to tell their stories publicly to the General Assembly.

That hearing never happened, and Democrats haven’t indicated any desire to take up the matter.

A look at some bills filed by lawmakers from Western Virginia

Feb. 11: Deadline for each chamber to complete work on its own bills, except for the budget.

Feb. 20: Last day for each chamber to complete action on budget bill.

Feb. 26: Last day to act on budget bills and revenue bills of other chamber.

March 5: Last day to act on remaining bills and put bills in conference.

RICHMOND (AP) — Virginia moved to the brink of becoming the crucial 38th state to ratify the Equal Rights Amendment on Wednesday, a momentous …