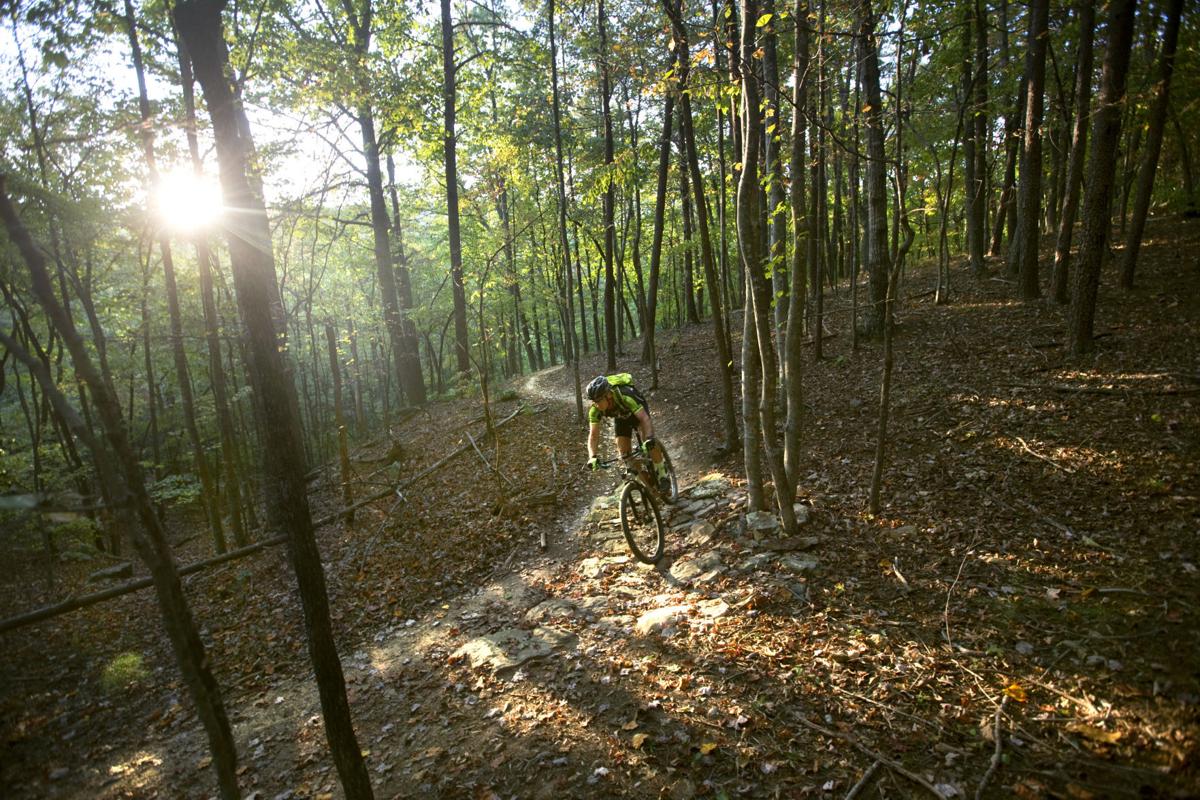 Steve Shaw of Richmond rides a rock feature on the new, but not yet completed, Rock-N-Roll Trail at Carvins Cove on Wednesday. The trail is known for a flowy ride and rock build outs. Construction of the trail by volunteers has been going on for two years. Flow trails such as this one take mountain bikers on a roller coaster experience meant for a smooth rhythmic feel. 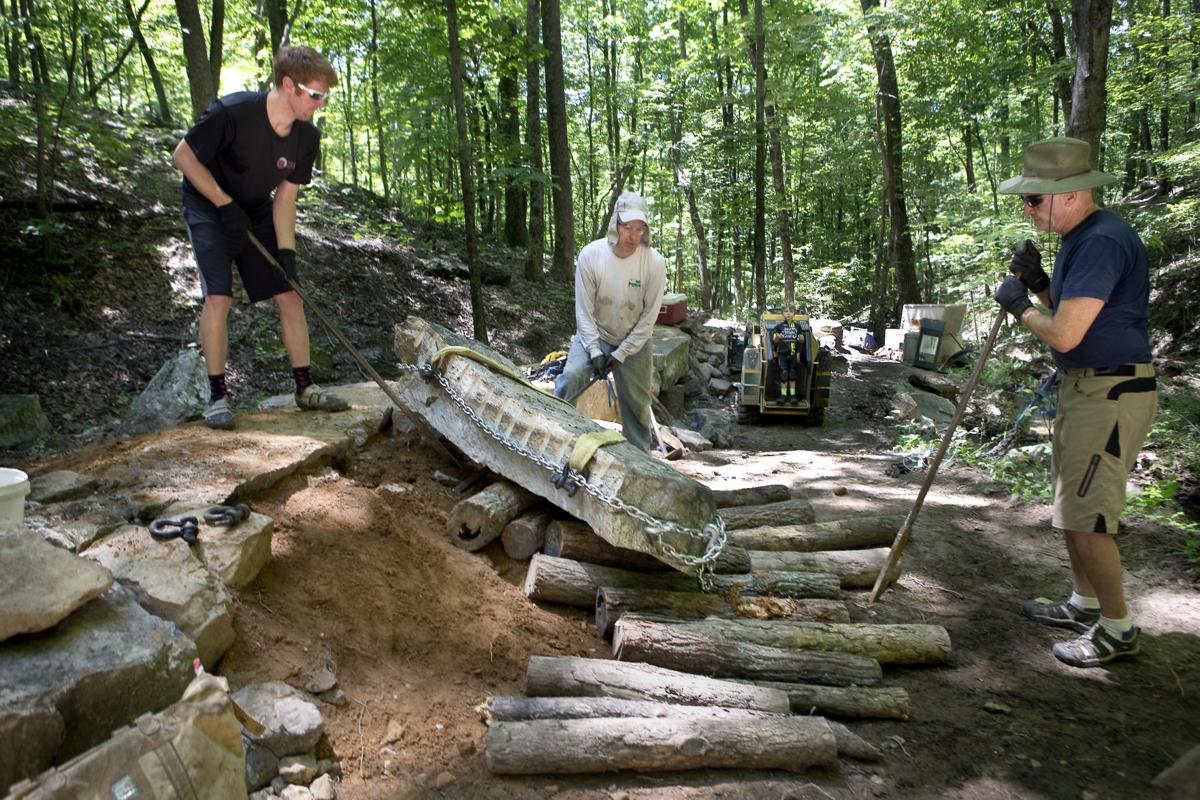 Donny Smith, Brian Batteiger and Scott Hassell use a log system to maneuver a large rock into place along the new Rock-N-Roll Trail at Carvins Cove on June 3. Batteiger has led the volunteer team building the section of trail for about six months. 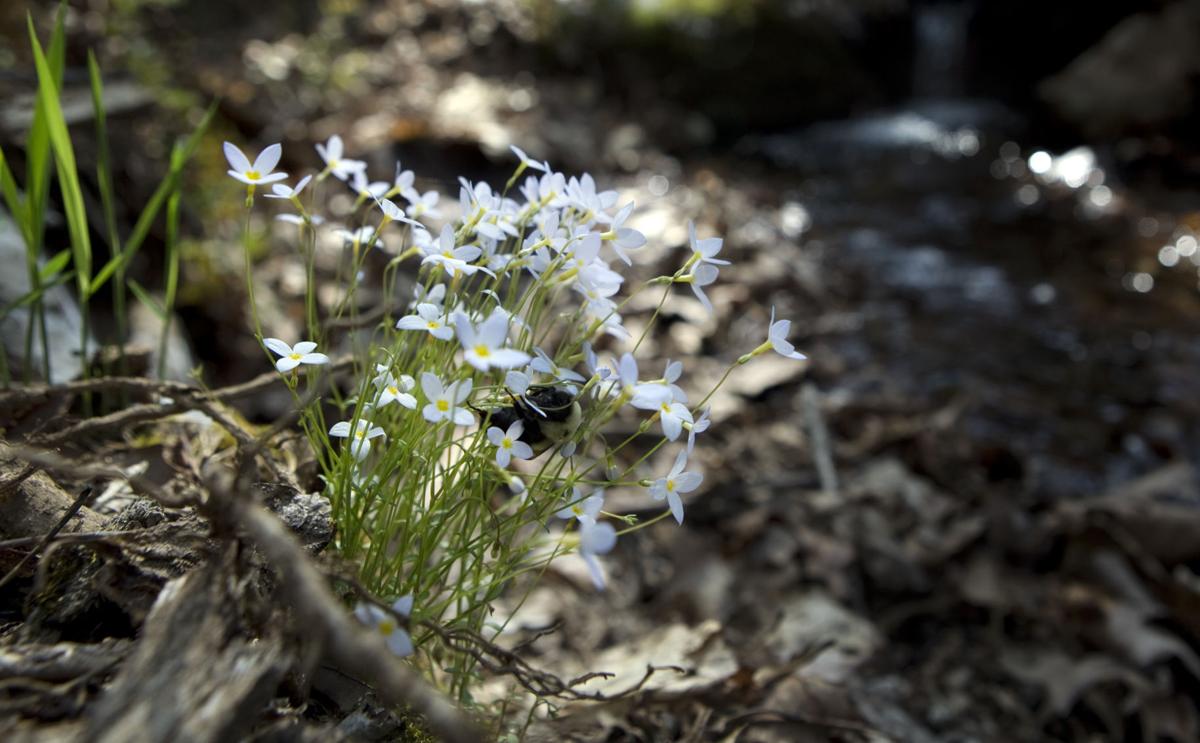 Flowers bloom in April along Rock-N-Roll trail at Carvins Cove. Organic matting is used to naturalize areas where trail work has been done once a section is completed. 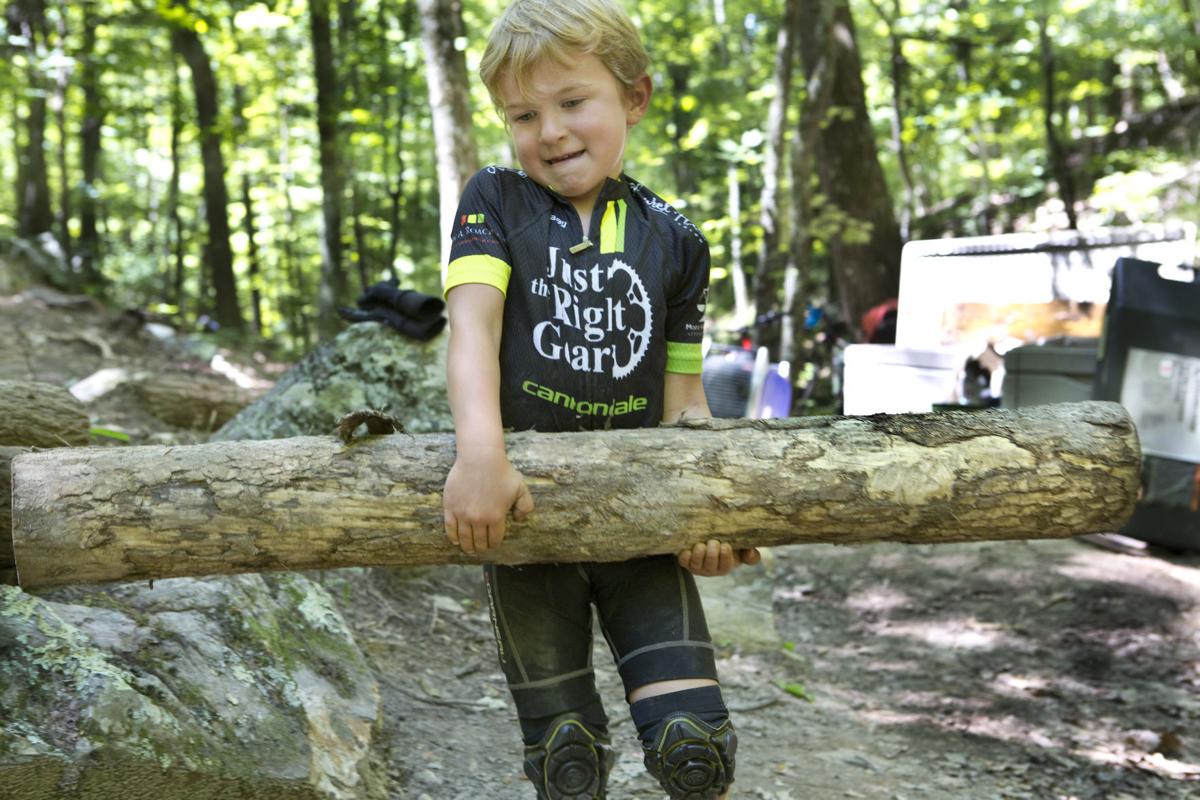 Steve Shaw of Richmond rides a rock feature on the new, but not yet completed, Rock-N-Roll Trail at Carvins Cove on Wednesday. The trail is known for a flowy ride and rock build outs. Construction of the trail by volunteers has been going on for two years. Flow trails such as this one take mountain bikers on a roller coaster experience meant for a smooth rhythmic feel.

Donny Smith, Brian Batteiger and Scott Hassell use a log system to maneuver a large rock into place along the new Rock-N-Roll Trail at Carvins Cove on June 3. Batteiger has led the volunteer team building the section of trail for about six months.

Flowers bloom in April along Rock-N-Roll trail at Carvins Cove. Organic matting is used to naturalize areas where trail work has been done once a section is completed.

Gerry Ciaffone kneeled down to get eye-to-eye with the culprit.

It was subtle but it was there — a slight wiggle lurking just along the outermost edge.

“I think we’re going to need another rock,” he concluded, “a big one.”

Set within the woodlands of Carvins Cove, a crew of volunteers has been working inch-by-inch to carve out a new stretch of trail that showcases both the rollercoaster flow of the mountainside and its craggy terrain.

The Rock-N-Roll Trail project, as it’s been christened, is an ambitious addition to a trail network in Botetourt and Roanoke counties that relies on volunteers for its expansion and upkeep.

Saturday, organizers are gearing up for a work day blitz to mark National Public Lands Day, when volunteers across the country will be pitching in for their public trails and parklands.

Carvins Cove, home to one of the Roanoke Valley’s reservoirs and the largest conservation easement in Virginia, currently has over 55 miles of trail and supporters hope to one day break the 80-mile benchmark.

The network is the biggest and most diverse in the valley with trails shared by mountain bikers, hikers and equestrians.

Rock-N-Roll will be the destination point’s first true “flow trail” — a path distinguished by a smooth, rolling rhythm that allows those traveling by bike to “flow” through its ebbs and turns.

“I call it a flight simulator,” said Yad Jabbarpour, an avid biker who, like many other cove regulars, already has tried out the mile-long section of the trail that crews have finished to date.

“Once you hit the corner, there is such a flow to this thing that it feels like flying, it really does,” he said. “It’s a blast.”

The trail, which follows the contours of Tinker Mountain, also draws inspiration from the mountainside. When faced with the question of how to bridge a creek that trickles through the woods, project leader Brian Batteiger proposed creating a stone crossing using immense slabs of rock re-purposed from the mountain.

“My first thought was no way,” said John Coles, who’s been volunteering as a trail builder for the past year.

“But it worked. It was amazing.”

For the last six months or so, teams have painstakingly maneuvered the hefty rocks — some of which weigh up to 1 ton — into place using a system of rolling logs, hand pulleys and winches, with a hydraulic jack used to make the final big lift into place over the creek.

“We used a lot of Egyptian methods,” said Ciaffone, a retired teacher who’s been volunteering for the last two years.

“It really is an engineering feat,” he said. “And at the end, you’ve got something to show for it that’s pretty darn cool ... This is something that is going to last.”

The crossing is now largely complete. During a work day Sunday, Ciaffone, Coles and others worked to pack down crevices in the surface with clay and sounded out the overall landing to ensure there was no give.

When a wiggle is found along one edge, more rocks are added to the support structure underneath, after some quick debate about the geometry of the formation to determine the best placement and angle.

Once the crossing is complete, the trail project will continue its push further into the forest. The first phase calls for a two-mile length of trail — half of which is now in place — that connects the existing Arrowhead and School House trails to create a larger, connected loop.

Long term, the plan calls for the trail to extend all the way down to the reservoir’s boat dock area, an additional distance of about five miles.

The timeline for reaching that goal will depend heavily on factors such as how many volunteers the project continues to draw, said Batteiger, who’s been a volunteer trail builder for over 15 years.

An electrical engineer in his professional life, he designed the layout of the Rock-N-Rock Trail and is guiding its construction as a project leader for Pathfinders for Greenways, a local nonprofit dedicated to building new trails across the region.

“It’s something I really enjoy,” he said of the work of shaping the valley’s trail network. “It’s a matter of creating something, something that will last and that people will get to enjoy.”

“Plus, I like being out in the forest. It’s a pretty nice way to spend a day.”

There is no minimum time commitment or prior experience required to volunteer. To date, more than 160 people have helped out on the Rock-N-Rock Trail across a series of weekend work days.

Roanoke Parks & Recreation is organizing its National Public Lands Day event around Carvins Cove and the Rock-N-Roll Trail. Volunteers are invited to come out Saturday morning to tackle a variety of tasks along the trail.

“We can find a job for everybody based on what they’re interested in,” said Renee Powers, trails and greenways supervisor for the department.

This type of community support is a vital part of Carvins Cove, Powers added. New trail construction at the cove is done exclusively by volunteer groups.

“Our volunteers are what have allowed us to have bike access and public trail access at Carvins Cove,” Powers said. “The value of what they do is astronomical.”

Volunteers have been slowly and painstakingly building a new "flow trail" in the northern corner of Carvins Cove, a network of more than 55 mi…

Roanoke is organizing a work day blitz for the Rock-N-Roll Trail as part of National Public Lands Day. Volunteers are invited to come out to the trail on Saturday morning to pitch in with a range of tasks.

Lunch, tools and instructions will be provided. To find out more or RSVP, go online to www.playroanoke.com or contact Renee Powers at (540) 853-5867 or renee.powers@roanokeva.gov.

Those interested in helping with trail projects on future work days can contact Powers to learn more.

A silver designation was no consolation prize for the various organizations seeking to elevate the quality of life in the Roanoke region.

It dips and dives, banks and turns, unfolding with a fast-flowing rhythm that allows riders to glide across its curves.